What is a UI artist?

Combining comfort with ease of understanding

User interface elements such as health gauges, in-game choice menus and option menus must be functional and easy to understand to allow players to grasp increasingly complex games with ease. As a UI artist, you’ll design and implement these interfaces to break down the barriers between player and game.

UI artists’ work is directly connected to the usability of the game. They must constantly evaluate their own designs from a player’s perspective and take an objective view of their own work to ensure the game plays smoothly.

At Platinum, as long as their interfaces are comfortable and readable, our UI artists are free to express themselves and experiment with ways to create even better interfaces. As their work is directly tied to the overall design itself, our UI artists work very closely with game designers and contribute ideas that shape the entire project.

Our UI artists work with game designers to create specifications for a user interface that best suits the contents of the game. Then they get to work representing these visually, creating interface screens that will allow players to control the game with comfort and ease.

The impact of UI

A UI artist’s work is far-ranging, and always has a major effect on how players experience the game. UI artists are responsible for:

How many of these tasks are allocated to the UI artist depends on that artist’s skill, but for the most part our UI artists handle all this and more.

Using Photoshop and Illustrator, our UI artists create all the two-dimensional assets involved in a game – title logos, in-game fonts and more.

Our UI artists can test out their designs directly in the game with our in-house interface tools, taking a hands-on approach to adding animation and designing the perfect layout. 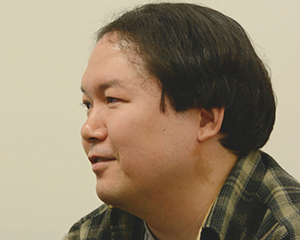 Please tell us about your prior experience, and what brought you to PlatinumGames.

Before I joined PlatinumGames, I worked as a 3D CG artist, creating animations and environmental models. Afterwards, when I started working in the games industry, I changed over from being an artist to working as a game designer. As time went by, though, I found myself creating less and less and managing more and more. I missed the feeling of creating things with my own hands. So I put my portfolio back together and started looking for artist positions. PlatinumGames took notice and offered me a chance at their company.

Tell us about the atmosphere in the UI department.

There’s a very comfortable, at-home atmosphere. The company I worked at before was larger, and people in different departments were separated across different floors, so there wasn’t much communication among different teams at all. But at Platinum, it’s easy to talk with people outside your department, whether about work or not. Once the work day is officially over, the atmosphere becomes very relaxed. It feels really at-home then!
Since I joined the company, they’ve started an office club system, where employees can start their own groups for coworkers with similar interests. It’s easy to connect with coworkers who share your hobbies.
Of course, I don’t mean to give the impression that we’re all peacefully relaxing all the time – as we come up on a deadline, everyone suddenly turns into a ruthless professional! Ideas about the game start flying all over the place. Seriously, you’d swear you could see the ideas flapping around in front of you!
As homey as the company may feel, Platinum employees are all professionals who’re great at getting down to business when it’s necessary.

Tell us about the UI artists at PlatinumGames.

There’s a big difference in duties between UI artists at Platinum and at other game companies. There’s more for us to do here, and a greater variety of work as well. At most other companies, a UI artist’s routine work is set in stone, to some extent – but here, it’s quite common to think you’ve got something finished, only to be told to start over later in production when something about it just doesn’t feel right.
UI work is all based on feeling, and at PlatinumGames we’re very particular about how all aspects of our game feel to players. Making a UI that feels right takes a lot of trial and error.
Sometimes I do feel bogged down by the added amount and range of work, but I truly believe that trial and error is the heart of PlatinumGames’ quality. It’s critical to press forward with a fighting spirit and hit the work head-on.

What’s the most fulfilling part of your job?

As I mentioned before, there’s a lot of trial and error involved, and this how I’ve come to think about it: “This is a step towards making this game the best it can be.”
No creator who’s trying to make something truly wonderful wants to compromise. However, I’ve definitely gone all the way through the process of making something only to look at it in the end and say, “no, this isn’t quite it.”
For example, I’ve designed screens where the player can change their equipment, and tested and been satisfied with them, only to look back later and say, “But I could improve the controls a bit here, and maybe that’d make it a bit more usable…” And then I’d see how another game tackled the same problem, and realize I really wanted to change my design in some way or another.
In other places I’ve worked, if you’d submitted something and nobody found any particular issues with it, but then you came back later saying, “Wait, I’ve got a better idea,” you’d usually be told no, the one you submitted was good enough, changing it would be a waste of time. They’re often so focused on efficiency that you have to give up the freedom to make the improvements you want to make.
But at Platinum, as long as you can meet the final deadline, you’re free to reiterate and retry until you’re truly satisfied with what you’ve made. At times it can become a tense battle against yourself with no end in sight, but as long as you remember to think, “This is for the good of the game,” you can press forward with that as your mission and work without compromising your standards.

What appeals to you about PlatinumGames?

I love how all these awesome, meaty titles keep coming in for us to work on!
When I try to think of the games we’ve announced over these past few years not as someone from within the company, but as an outsider, I imagine they’re pretty shocking. “Wow, Platinum’s working on this?” “Geez, what else do they have up their sleeves?”
As a game lover myself, I can’t help but share that sense of expectation, you know, “what are we going to do next?”
This current generation brings a lot of changes to the games industry, and PlatinumGames keeps making games that continue to excite and inspire gamers. That’s the appeal of PlatinumGames to me!

What tools do you primarily use for work?

I use Photoshop, Illustrator and similar programs to create my designs, layouts and textures. When I want to give the director and game designers an impression of how my designs would look when animated in-game, I use AfterEffects.
Then I use our own in-house tools to put what I’ve made into the game itself. The modern game industry is fast-moving and diverse, so we’ve been trying out other companies’ tools, and taking on new projects, and working together as a team to improve our own tools with those as inspiration. This helps us constantly improve our tools to suit our artists’ changing needs, and add appealing functions to make the creative process even more enjoyable.
The computers we use have not only the 2D CG tools we need, but also Maya and other 3D CG modeling tools at our disposal.

What would you tell someone who’s considering applying to PlatinumGames?

Working at PlatinumGames is hard but enjoyable. This company is a wonderland for people who want to make the greatest games possible. If you’re looking for an environment where you can realize what you’re truly capable of, PlatinumGames just might be the place for you.

User Interface design experience is preferred, but not required for applicants with art skills conducive to game creation. PlatinumGames is an equal-opportunity employer and does not base hiring decisions on the race or citizenship of applicants.

For you to be your best at PlatinumGames, either Japanese or English is needed for communication with other members of our team.

To apply, please prepare the documents and materials described below, and submit them either through our Online Application** or by postal mail.

**When preparing files to submit through the online application form, please ensure that your name is included in each filename. Please note that only PDF, JPG, PNG and GIF file types can be directly uploaded, and that there is a maximum size of 5 MB per file. If you need to upload files greater than 5 MB in size, or in formats other than those listed, please feel free to use external services such as Dropbox, firestorage, YouTube or Vimeo, or your own online portfolio. If you do so, please provide the URL where your materials are located with your application.