We finally released SOL CRESTA!
I’ve seen that some people have already beaten it and others have posted some incredible Caravan Mode scores. There have even been quite a few positive reviews! I’m extremely grateful for all of it.

And with regard to some unfortunate oversights and dissatisfaction, we plan to work on those, but it may take some time so please be patient as we hammer them out.

In our most recent live stream, we introduced some gameplay techniques and hidden score bonuses.

I’d like to take this opportunity to introduce some of them here as well!
Try mastering them to get your high scores even higher.

Use Split Slowdown for Convenient Dodging!

If you take advantage of the slow motion that activates while you have the Yamato split, you can dodge any attack! For example, on Very Easy difficulty you get 30 seconds of slow motion time, so make use of it if you’re having trouble beating a stage!

Match the Right Shot to the Right Enemies and Gimmicks!

With Susano in the center position, your charge shot becomes the Gigadrill. It’s not only great for close range attacks, but it can also take out enemy shots! If you use the Gigadrill as a shield, you can survive the enemy’s relentless attacks!

Use the Rapid and Shot Buttons Together!

You can use the Shot button to activate charge shots while holding the Rapid button, letting you fire charge shots without interrupting your hail of fire! You can also fire Command Shots the same way!

The faster you defeat mob enemies, the more Sol Medals they drop! But the opposite is also true, so don’t ignore them! 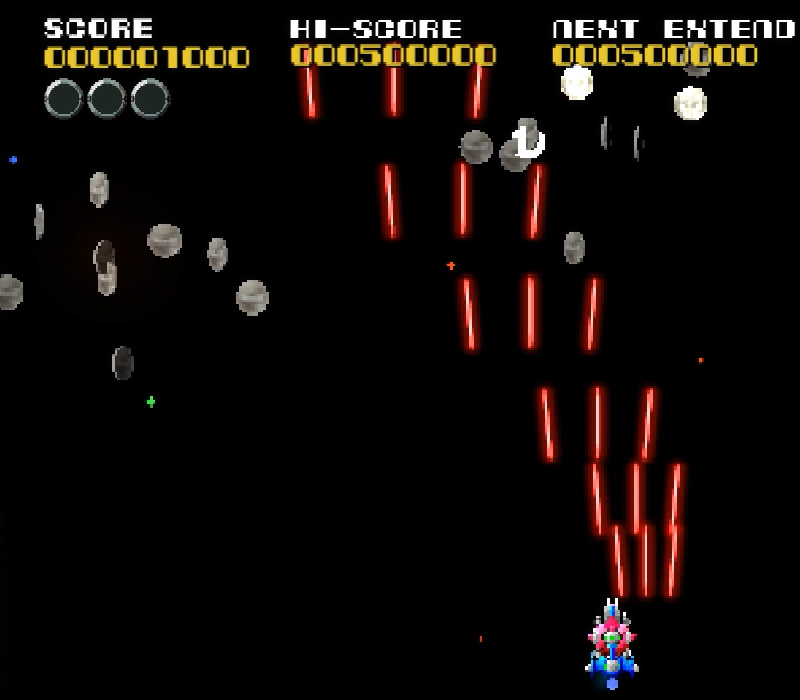 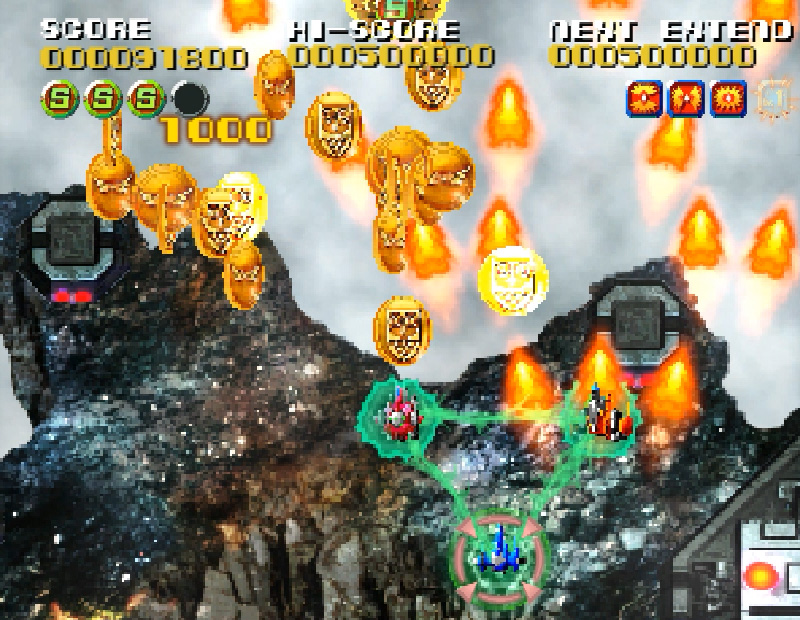 In addition to the method shown in the manual, there’s another way to activate Formation Attacks!
This is really useful when you want to use them quickly!

Only Your Fighter Takes Damage While Split!

Shoot the Sol Ball during Slowdown to Charge Tons of SP Energy!

The Sol Ball charges SP energy when shot, but if you split the Yamato and activate slow motion, you’ll have more time to shoot it and charge more SP energy!

Destroy the Sol Ball for a Big Point Bonus!

Normally you shoot the Sol Ball to charge SP energy, but it can actually be destroyed with Formation Attacks, resulting in a nice point bonus!

Use Enemy Mines against Them for Extra Points!

When you shoot mines, the shrapnel flies out and hurts enemies too, giving extra points for enemies it takes out! Try to turn the enemy’s trap against them and boost your score!

Gates open by destroying the central lock point, and if you destroy it with the shot of the same color, you’ll get extra points! You might accidentally take it out while rapid firing but try to remember and go for the bonus points!

Collect Every Type of Formation Chip for a Special Bonus!

If you collect all five Formation Chips, you’ll unlock the Phoenix Formation AND get a special point bonus! Be sure to try and collect them all!

Beat the Boss with a Full Squad for a Special Bonus!

If you beat a mid-boss or boss with the Amaterasu, Tsukuyomi, and Susano intact, you’ll get a special bonus!

With all three fighters intact and your shields maxed out, each Sol Emblem you collect will be worth an increasing number of points! Remain undamaged and continue to collect them and eventually each Emblem will be worth 10,000 points!

Pass through Secret Areas for a Secret Bonus!

Each stage has a secret area, and if you pass through it you’ll get a secret bonus! Check any suspicious-looking places you find!

Collect Ten of the Same Formation Chip for a Secret Bonus!

Each time you collect ten of the same Formation Chip, you’ll get a secret bonus! It’s worth a lot of points, so don’t let any Chips slip by!

If you keep shooting a Formation Chip, eventually the elusive Pt Shirogane will appear! She’ll give you a 1UP if you catch her, but she runs away toward the top of the screen so you’ll have to be fast!

Dramatic Mode has a Hidden Ending!

If you manage to shoot down all of the big fireworks drones during the Dramatic Mode credits, you’ll be able to see the hidden ending! The number you shot down will be shown at the end, so try your best to get them all!

So what did you think?
Was there a lot of information you didn’t know?
I hope you try out these techniques and secrets to blast to the top of the rankings!

That’s all for now, then. See you next time!