Vanquish was my first gig in the highly desirable game industry, and I was able to work on a big game right out of the gate, with a really fun team to boot.

For Vanquish, I worked on backgrounds towards the beginning of the game, and the main vehicles and space ships during the latter half. At the end of the project, I worked on promotional art pieces. I think you’ve most likely seen my work in the DARPA logo, the friendly and enemy transport ships, and Burns’s flagship at the beginning of the game. Amongst those, it was great fun to make the enormous objects we threw into the stages, like Burns’s flagship, because of just how much presence they have on-screen.

There are lots of things I’d like to tell you about Vanquish’s development, and I’d like to start by giving you a look at how our art pipeline worked.

When making some of the promotional art for Vanquish, we used the base in-game models and worked with them further in 3D software packages to create new images that let you into the game’s world a bit deeper.

The in-game visuals are more than adequate; however, if you were to blow it up and print it, you need much higher resolution. Also, there has been a rash of really high level art assets being put out by some rival titles. To make sure Vanquish didn’t play second fiddle, I thought that I needed to make sure everything was set up perfectly and retouched.

Art Pipeline 1
First, I took a composition drawn by Usui-san, one of our concept designers, and created to be an art asset. Then, with the help of other team members, I decided how the pose and composition of the work should look in 3D and finalized the layout. 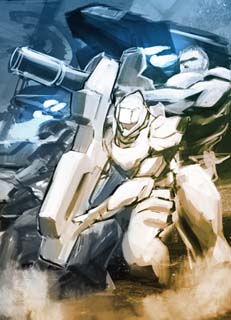 So using this as a base, I refined the pose and composition of the shot.

Art Pipeline 2
Rendering out a single frame of a model at this high quality would take too much time, so I split up things into elements and rendered them individually. 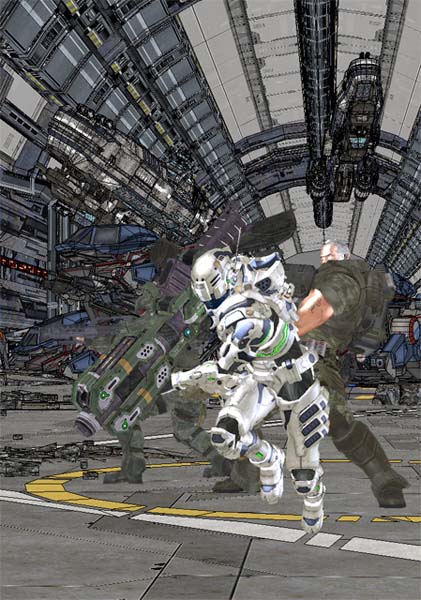 Finalized layout from the 3D package.

Art Pipeline 3
At first, the atmosphere of the work and the details are still a bit rough, so I use a painting program to go in and add small touches/retouches to the work.

This is a before and after of the retouch process. You can see things look more atmospheric.

Art Pipeline 4
Here I keep on adding in lighting, atmospheric elements, and other various effects to make the shot pop. 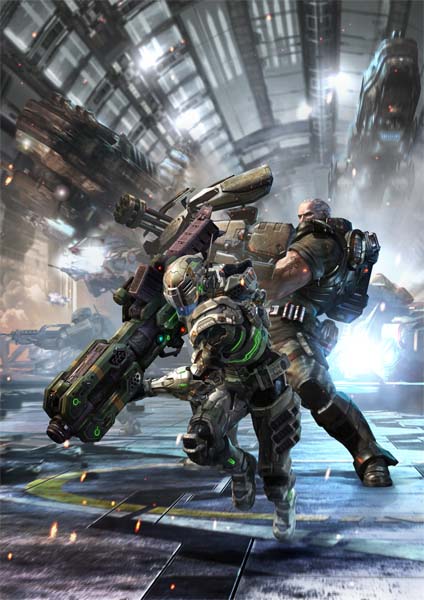 This is the finished image. You can tell it has changed a lot from the original data.

Art Pipeline 5
For a large image, it is easy for there to be over one hundred layered individual elements. I keep playing with tweaks to this really complicated data pool as long as time allows, finally producing the fixed art asset. 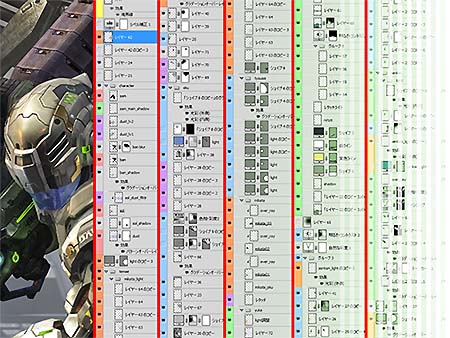 A look at the layers of the image.

I took great care in creating all of the art assets for Vanquish, such as character images, that found their way into magazines and the game’s homepage.
I spent time to add a lot of little details into things, especially in places like the exterior materials and parts of the robots, so once you are done with the game, I hope you turn your attention to these places.

It has been a month since Vanquish was released, so even if you’ve completed the game, there is still plenty to do between the Tactical Challenges and God Hard mode, so make sure you give them a try! As for me, I finally completed everything in the game! I can’t even write the number of continues it took me to beat God Hard… LOL.

Well, that’s it for now. Until next game, have fun!