Hey everyone. My name’s Yusuke Hashimoto, the director of this game. Recently, I keep hoping someone will make a Bayonetta Amiibo for me.

I’d like to talk about enemy design, which is something I handled since the original Bayonetta.

Deciding on enemy designs in Bayonetta 2 was… not an easy process.

-I have to design and be the director at the same time.
-I used too many good ideas in the first game.
-Now I have to come up with angel AND demon enemies.

I’ve got enough work as it is, so I’m baffled as to why I volunteered to be a designer. You get some crazy courage the first game you direct.

Anyway, let’s introduce a few of the enemies in this game. We’ll start with a few ideas I had for the original but didn’t have room to fit in. 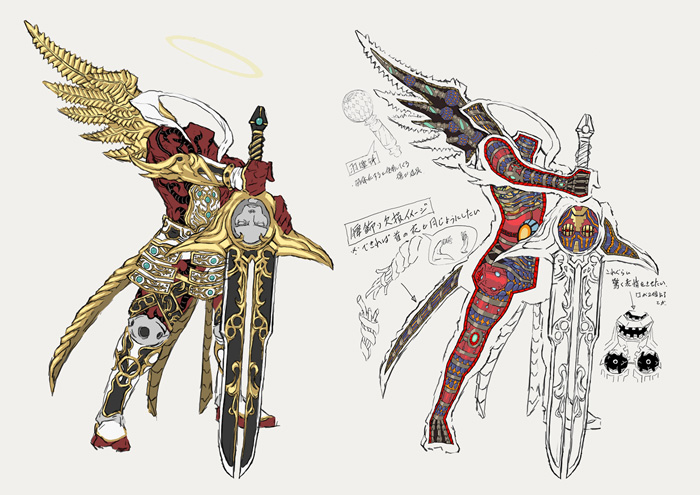 We call this guy Headless for short. I wanted him to have a powerful, solemn, sacred look to him, but also kinda be an idiot. The sword with the face on it is his actual body; the rest is just controlled by the sword. When I designed him I thought maybe the body holding the sword could be destroyed and replaced indefinitely, as long as the sword remained intact.

Next, we have the Magic Angel, who uses his staff to cast spells. 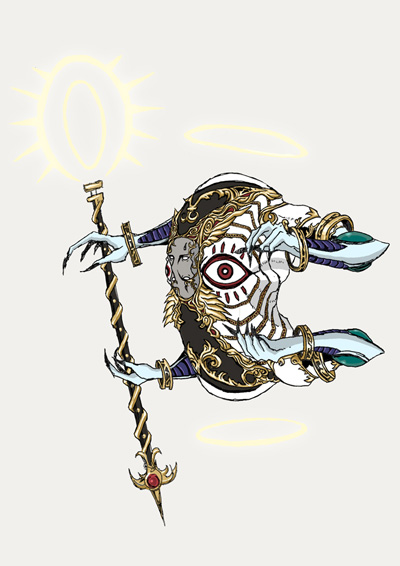 I designed this character thinking it might be interesting to have someone who could change things up in battle by raising his allies’ attack power and healing other angels. With those two done, I’d hit the bottom of the idea bank I had from the first game.

To be honest, I feel like I put every creative idea I had in the first game. So, if the original’s enemies were good, why not just bring them back in the sequel and change them up some? Later I realized just how boneheaded of an idea that was. The more we developed the game, the more it became clear that a newly designed Bayonetta fighting not newly designed enemies was boring. As the director of the game, I wanted Bayonetta to fight something different. I had some trouble coming up with ideas until I realized—I should step away from using just the human frame as a base. That’s when I finally hit on something—our Centaur Angel. 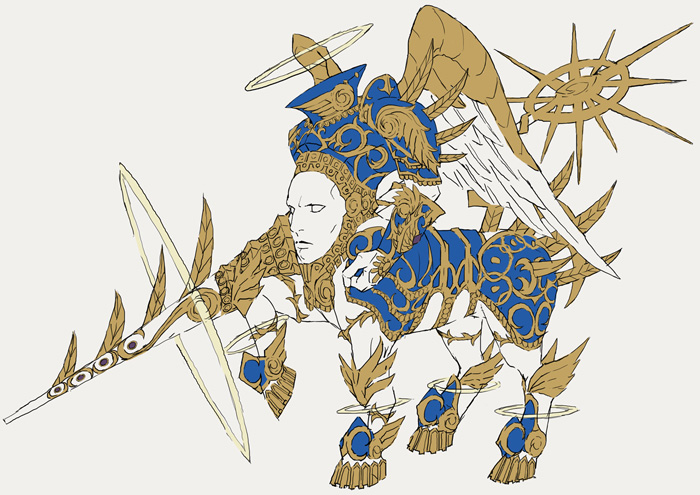 As you can tell from the picture, his concept is part human, part horse. He’s one of the more common enemies in the game.

In Bayonetta 2, dodging the enemy’s attack to activate Witch Time and then attacking relentlessly is central to gameplay. In order to accomplish this, it’s important to give enemies an outline and attacks that will be easy for the player to see (I assume this should go for more than just action games like Bayonetta, as well). So, for this game, we left the easiest “tells” that come with a human based design, but took some liberties with the new horse form, like putting his face on his stomach. We guessed Bayonetta’s attacks would likely land there, and it’d be fun to see what kind of reactions he’d make. I also tried to design his armor and accessories to give him a bit more of a “leveled up” appearance than the most common enemy in the original, Affinity (this is Bayonetta 2, after all).

I usually don’t keep my rough sketches, so I can’t really show you the process of how I went from human to horse, but I can say he’s probably the character I spent the most time designing. A lot of the other team members think he looks pretty big to be a common weak enemy, but I’m pretty happy with how he came out.

After finishing this enemy, the door was opened to completely revamp some angel enemy design. The next angel I worked on was this heavy armor guy. 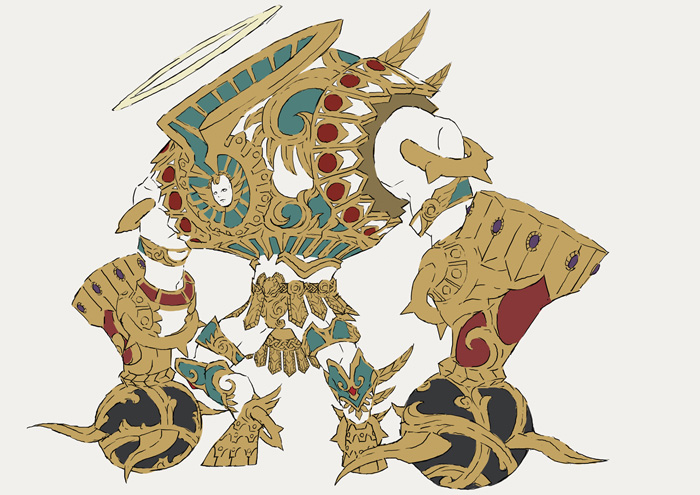 I wanted this enemy to convey two things to the player through his design: he’s a power type, and has some kind of elemental attribute. So, I bulked the frame up on the top and gave him iron balls for both of his hands. In the game, he has a fire version and an ice version.

Next, let’s introduce Belief. This enemy’s been around since the premiere trailer. 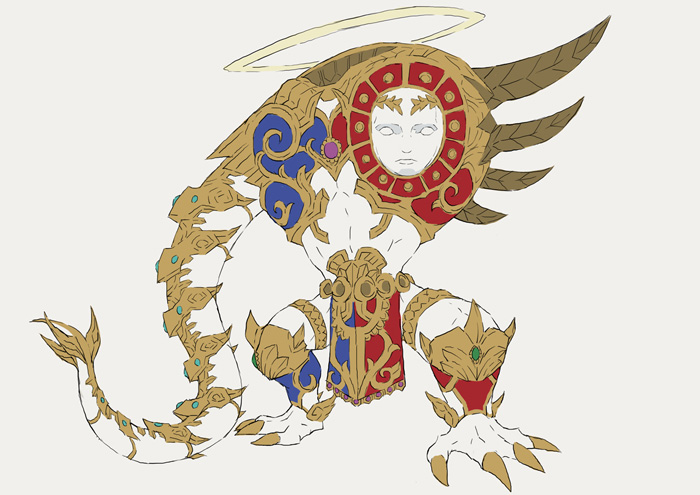 His concept was to make him asymmetrical so it would be easier to understand how he attacks. After I started designing Belief, I realized the first Bayonetta doesn’t really have any asymmetrical enemies, so it was relatively easy to draw him and think up attacks.

Here’s a new angel that kind of takes the place of the manta angel, the underwater enemy from the first game. 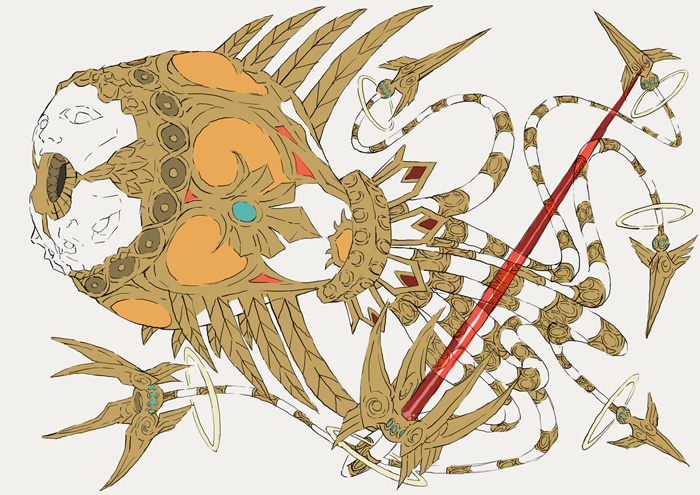 Bayonetta 2’s initial location is Noatun, a coastal city full of rivers and lakes, so I wanted to create an enemy that could behave and move differently in and out of water.

Last, we have one of the bosses of the game, the Dragon Angel! 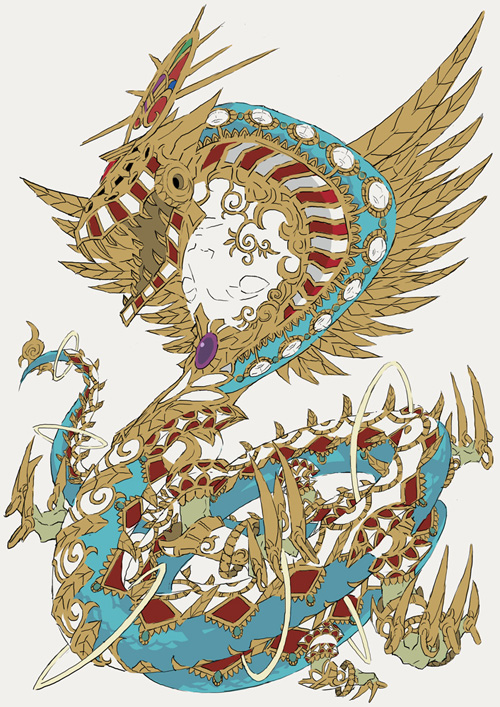 Since we have a dragon angel in the first game (Fortitudo), my biggest concern for this character was to have him look and behave differently.

Well, I thought I might get into some demon designs here too, but I’ve talked long enough already, so let’s save that for next time. See you again!