Welcome back! PG game designer Takahisa Taura here again. Not too long ago, some of my team and I shared a look into our development process for NieR:Automata on this very blog. We were delighted to see how well-received it was! I’m glad to be back today with more perspectives from even more members of the team. Thanks for reading, and we hope you enjoy it. 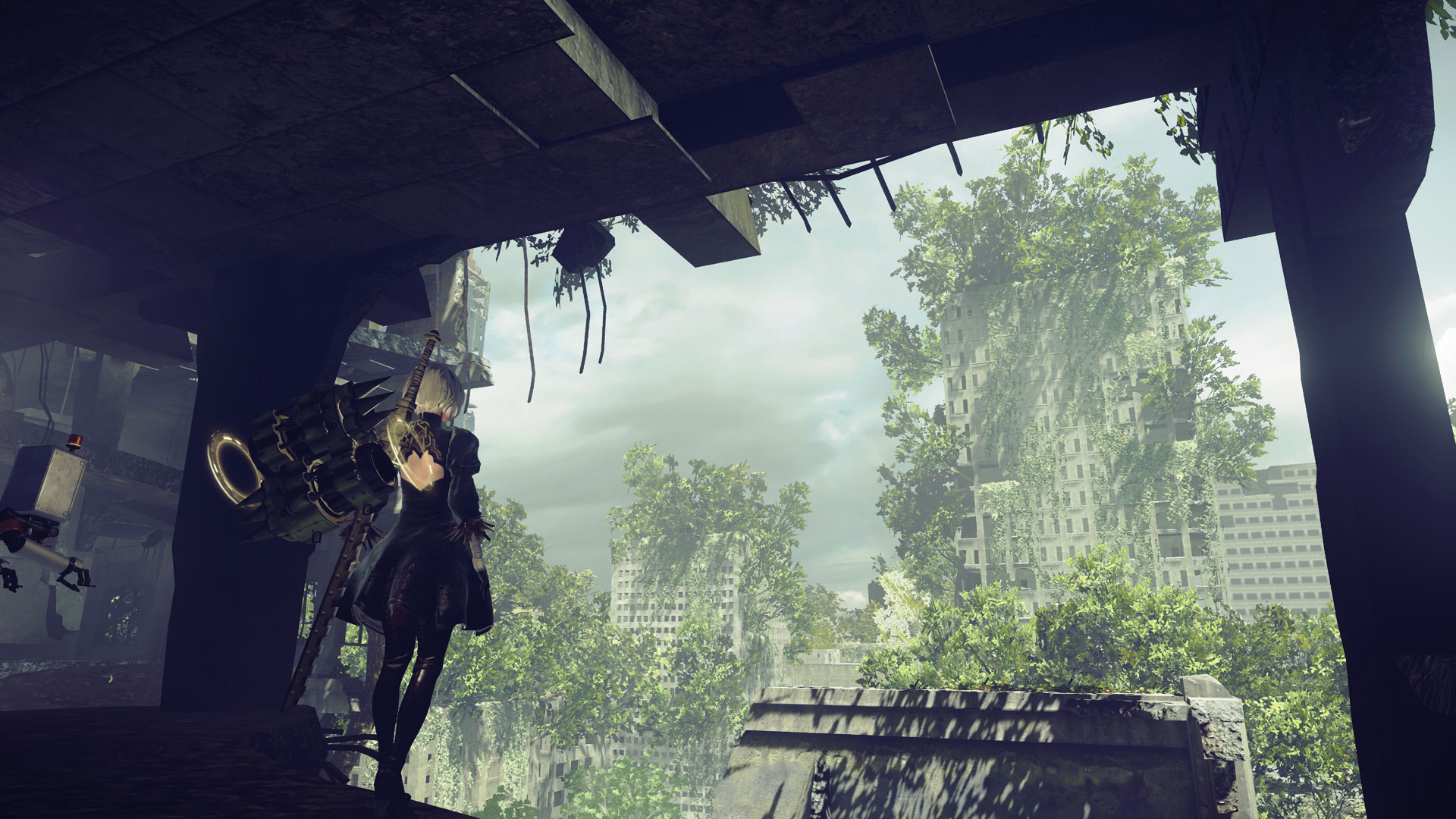 When you hear the name “PlatinumGames,” what comes to mind? For a lot of gamers, it’s a name synonymous with fight scenes packed with as many enemies as we can muster. However, NieR: Automata isn’t just a PlatinumGames title; we have to reflect Director Taro Yoko’s vision as well. Part of that means a lower density of enemies than we’re used to. As a result, when you play NieR: Automata, you’ll be able to take your time and enjoy the still beauty of the game’s desolate world. It’s shaping up to have an atmosphere that’s quite different from what you might expect from Platinum, in a good way.

There’s tons of stuff waiting for you in NieR:Automata that you might find pretty quirky, too. To give some examples: for one part of the game, we had to make mosquito noises; we’ve added some mysterious and inscrutable items to the options menu; and so on. I can’t really go into specifics yet, of course, but NieR:Automata is loaded with a wide variety of interesting content. I’m really looking forward to letting you get your hands on it. 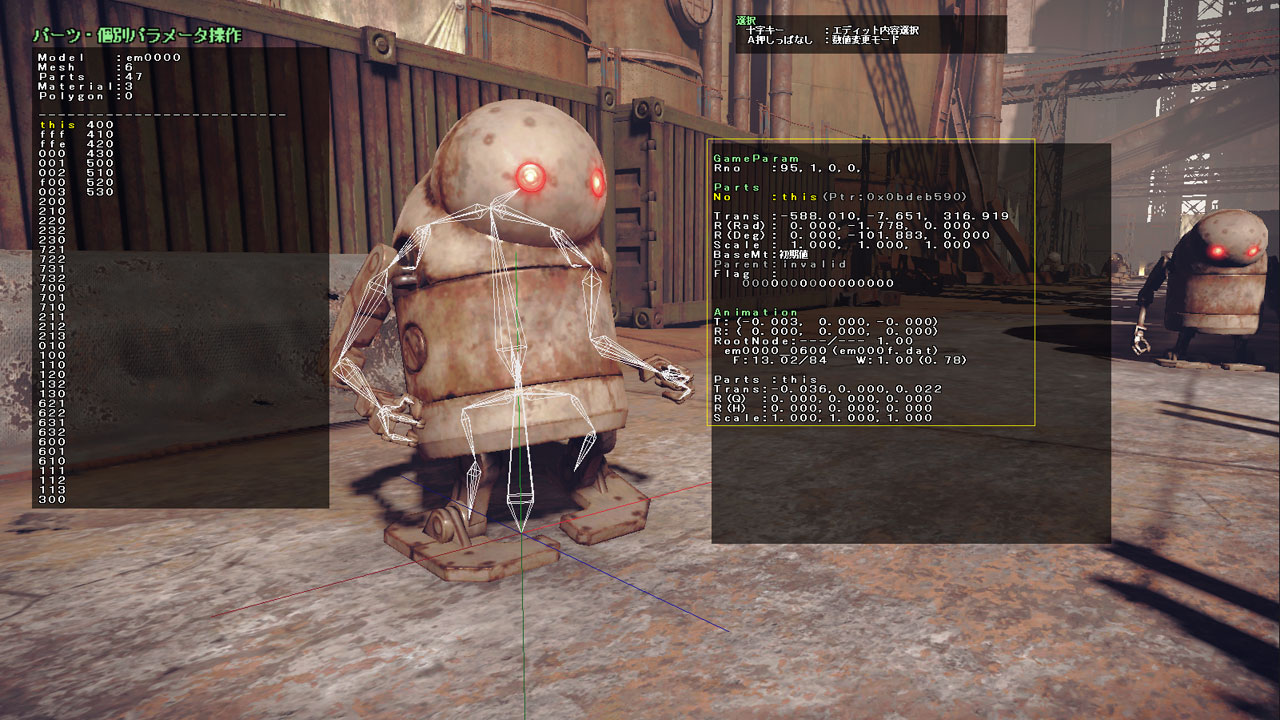 Programmers’ work tends to involve a lot of things that can’t be seen, and as a result often seems a little bland. Maybe that comes across in the screenshot above. Bland, huh? What you’re looking at, by the way, is a tool that displays information about enemy characters’ joints – their positions and current status.

So, we programmers work with a lot of things that can’t be seen. That means we can’t do our best work without a clear picture of the game’s insides. In addition to programming the game itself, we also make tools like the one you see up there to get that clear picture of what we’re working on.

As a programmer, I’ve faced a lot of new challenges while working on NieR:Automata that I’d never encountered before at PlatinumGames. A vast world to explore, robust combat that weaves between top and side views, and of course the bullet hell elements that are a staple of this series. All of these make the world of NieR exciting and interesting.

Hey, maybe you’re thinking, “I’m not so great at action games. Aren’t PlatinumGames’ games famous for being difficult?” If so, I’d like you to know that we’re doing some pretty cool things to make sure that even players who aren’t seasoned action veterans can enjoy NieR:Automata. And rest assured, hardcore action gamers – we definitely haven’t forgotten you, either.

I really think we’re putting together something special that will appeal equally to both fans of the original NIER and fans of PlatinumGames. I can’t wait until you get to play it! 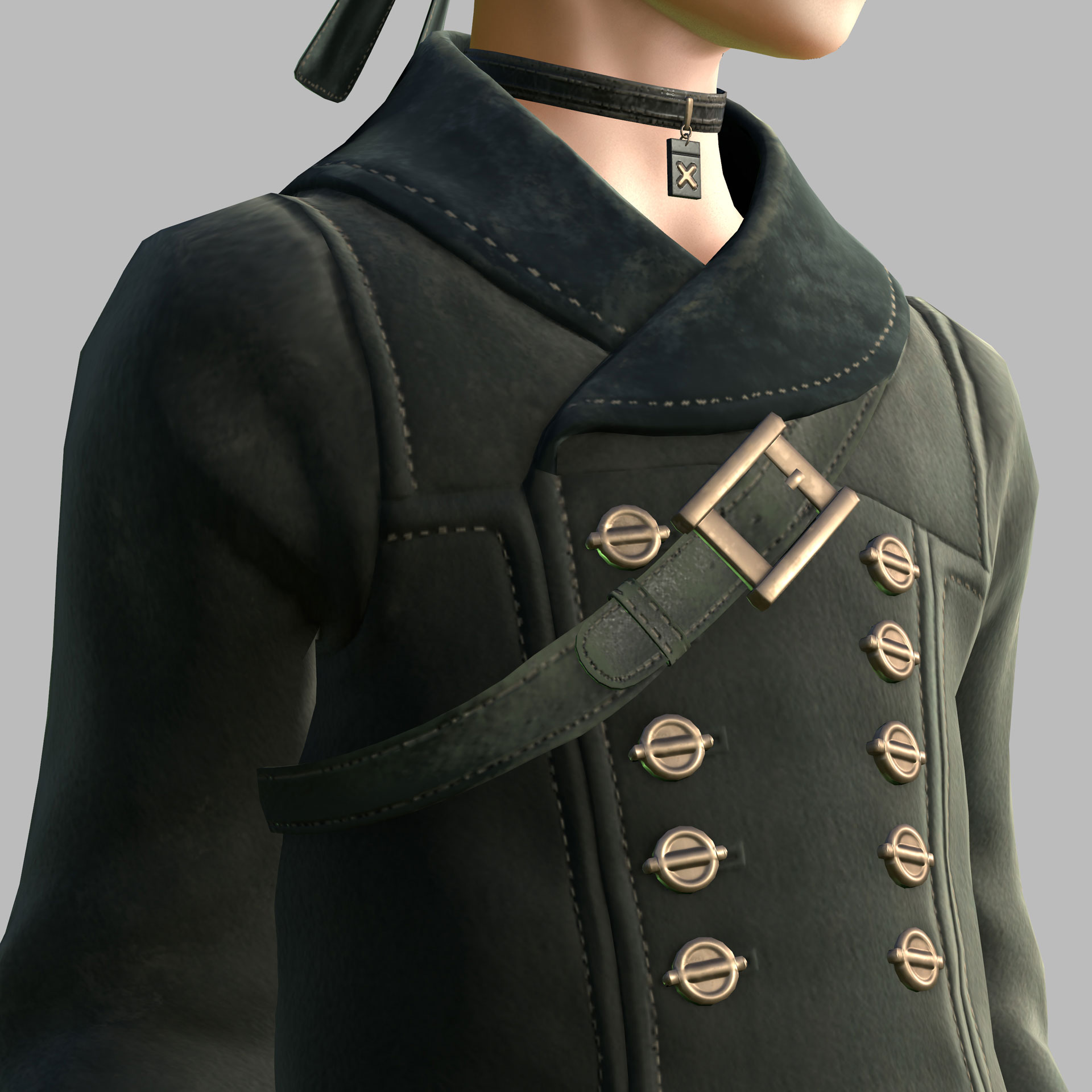 One thing I think you’ll notice when you’re playing NieR:Automata is how convincingly we’ve captured the feeling of velvet in the main characters’ clothing.

Even with the powerful physically-based shaders used in modern games, unique fabrics like this are still pretty difficult for character modelers to create. Still, I think all our hard work paid off in realistic, good-looking velvet.

As a 3D modeler, it’s tempting to overemphasize the look and feel of an individual object to make sure its essence clearly comes across. It’s taken a lot of careful tuning to make sure every character model fits the overall mood of NieR:Automata without overdoing it.

I hope that you’ll pick up on all the subtle differences and details of the crumbling world all around you as you play the game. We’ve put a lot of effort into getting them just right! 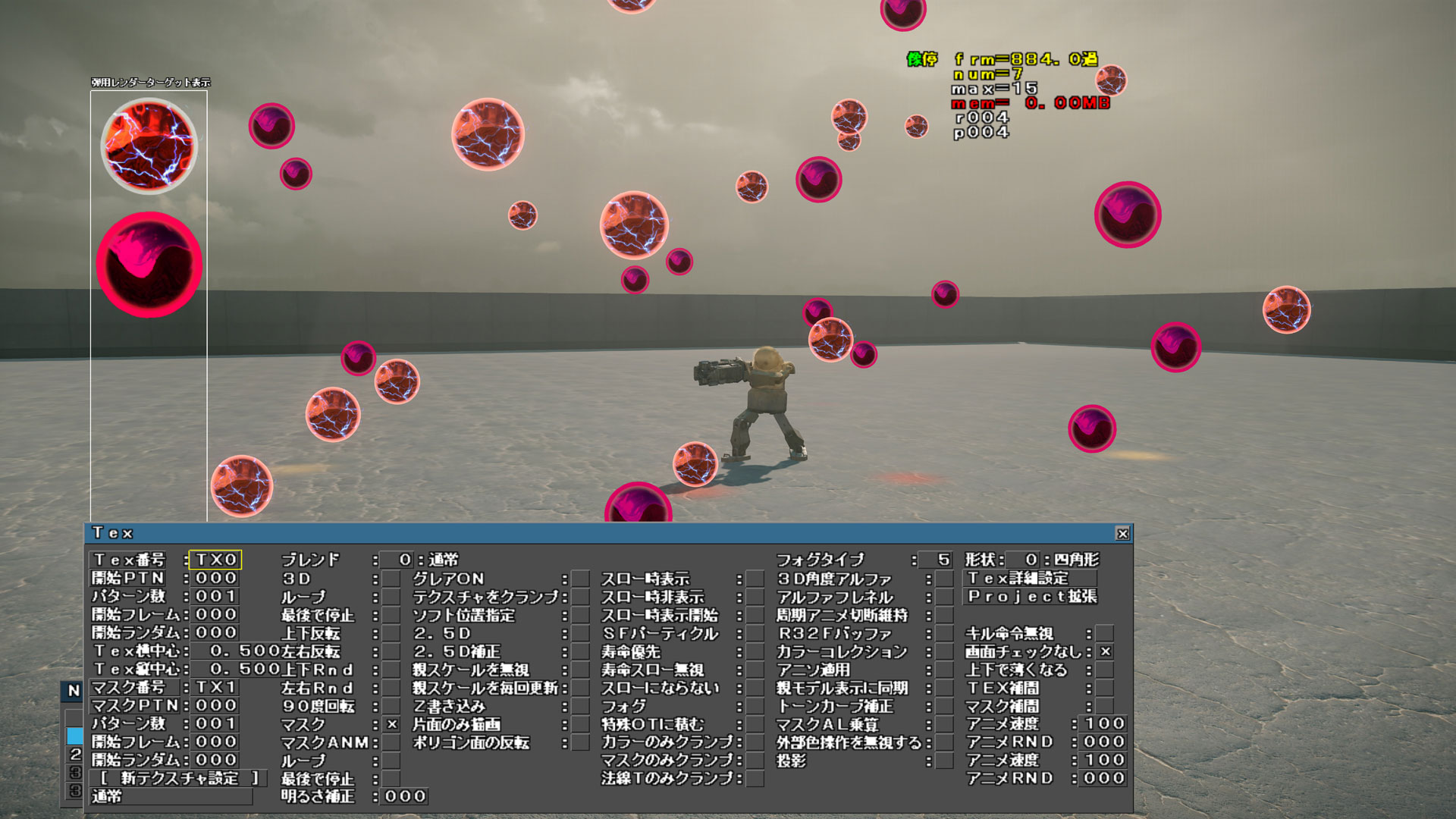 The most painstaking effort I’ve personally put into this project was nailing the appearance of the projectiles. I’ve tried to respect the familiar visuals of the original NIER while also creating effects that’ll look good in the crazy barrages of bullets you’ll see in NieR:Automata.

The bullets in the original NIER weren’t just simple transparent objects – They had a mysterious look that made them appear to be solid, real things. This made them highly visible, and the bullets in NieR:Automata remain true to this design.

One major new addition in NieR:Automata, though, is that each projectile is also a light source. Any objects within a certain distance of a bullet are lit by it, which makes it easier for players to figure out how close they are to danger.

It’s a little difficult to convey this to players at home without getting into the specific details, but putting massive amounts of enemy fire on the screen when each of many bullets is lit this way involves a lot of processing power. I owe a lot to the programmers who made this feature for us! I know it took them a lot of hard work. 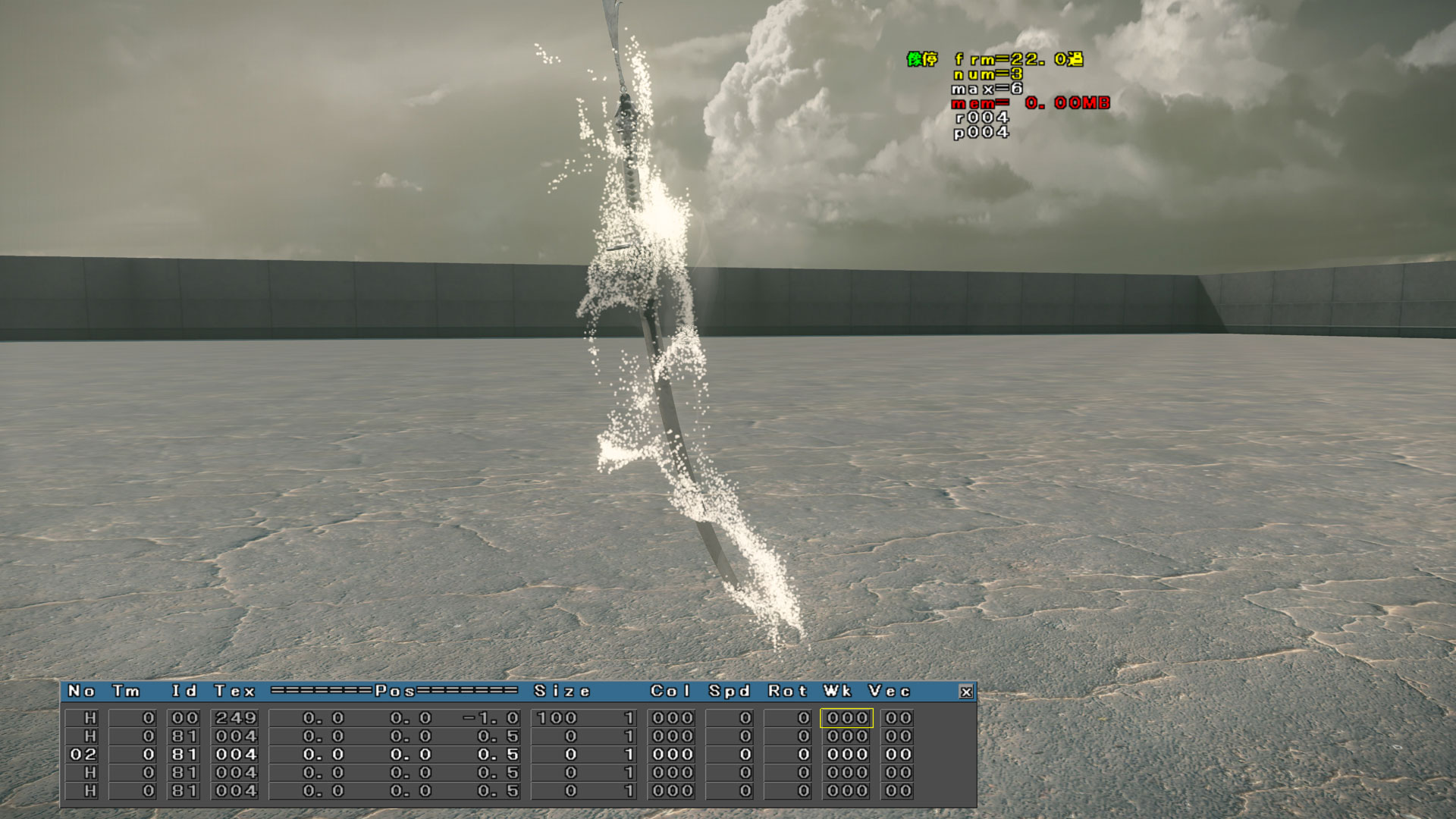 Throughout NieR:Automata, you’ll see a lot of winding, scattering effects like the one you see here – made up of tens of thousands of floating particles.

Visual effects like these are one way that we convey the calmness and richness that define the visual style of NieR:Automata. We’ve been testing various effects over and over again since the earliest stages of production to match this concept in the best way possible.

However, effects like this take a lot of processing power, so effectively implementing them in the game proved to be rather difficult in earlier stages of development. However, we’ve made a lot of successful optimizations since then, and now we’re able to put more and more effects like this on the screen with ease. When you play NieR:Automata, I recommend you try focusing on our effects every now and then – watching all these particles twisting and moving together feels great!

Our team has contributed a lot of ideas that have helped us control some pretty complicated movements in our visual effects, and we’ve added a lot of interesting movement to the game. I think you’ll agree it’s a must-see! 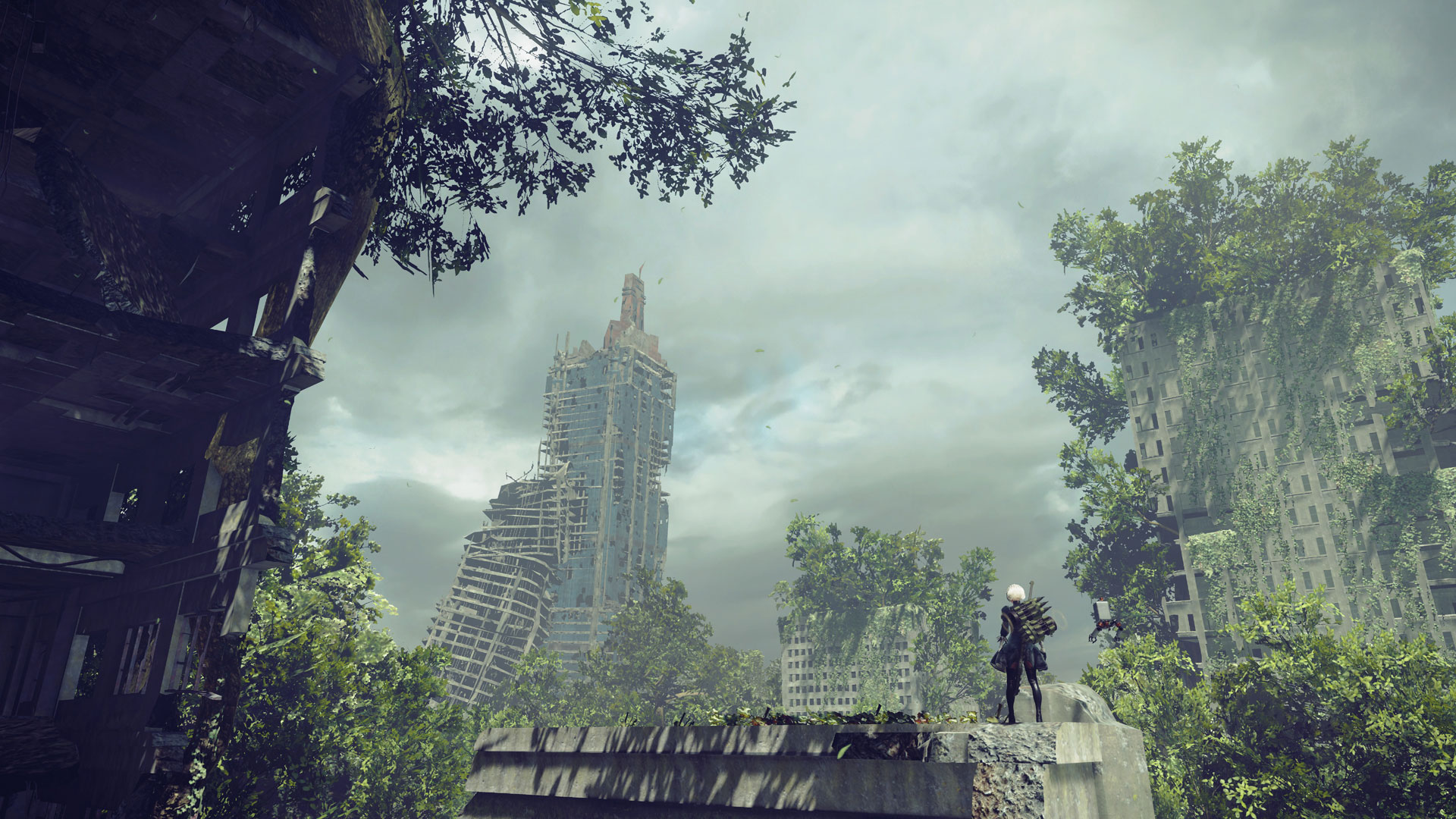 This game is made up of several spacious stages that all connect together seamlessly, meaning you’ll be able to walk around freely. One especially large stage, placed right in the center of the world, is the City Ruins. Just as it sounds, this area is a large, ruined metropolis, overgrown with plant life.

You’ll be able to move all across the complex terrain of the City Ruins, climbing to the top of crumbling buildings, or going inside them to explore. We’ve made them a place that players can jump and dash all over as they enjoy exploring and fighting among the ruins!

As we designed the overall feeling of the world and all of its landscapes, we decided they should feel like destinations that players would want to actually go and visit. The City Ruins are no different. We designed it so that players would really want take in all the sights of a crumbling city being slowly reclaimed by nature. And of course we also have to reflect the overall feeling of NieR’s world in it as well, carefully working out the lighting and sense of space together with Director Taro Yoko.

I think we’ve put together a world that’s as beautiful to look at as it is fun to explore. Please look forward to it! 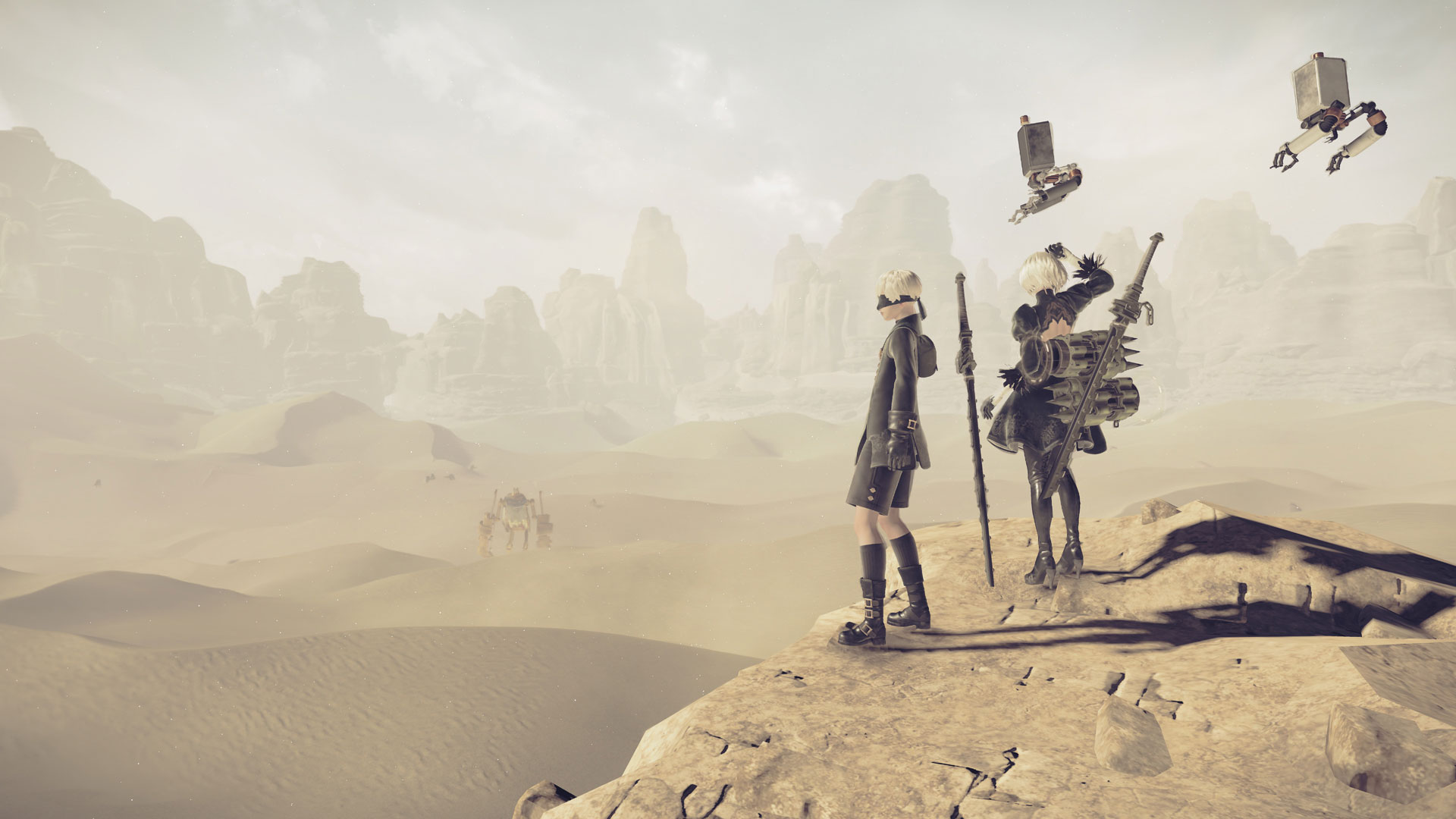 Hi, my name is Shohei Kameoka and I’m in charge of environmental lighting for NieR:Automata.

We’ve designed the environments in NieR:Automata with an eye towards emphasizing silhouettes through the use of open space. I’ve done my best to use striking, chic color combinations to give the entire world a fashionable impression. The desert area in the screenshot above is a particularly good example of how we’re using open space – when you play the game, please pay close attention to how it feels to explore this vast, open area. 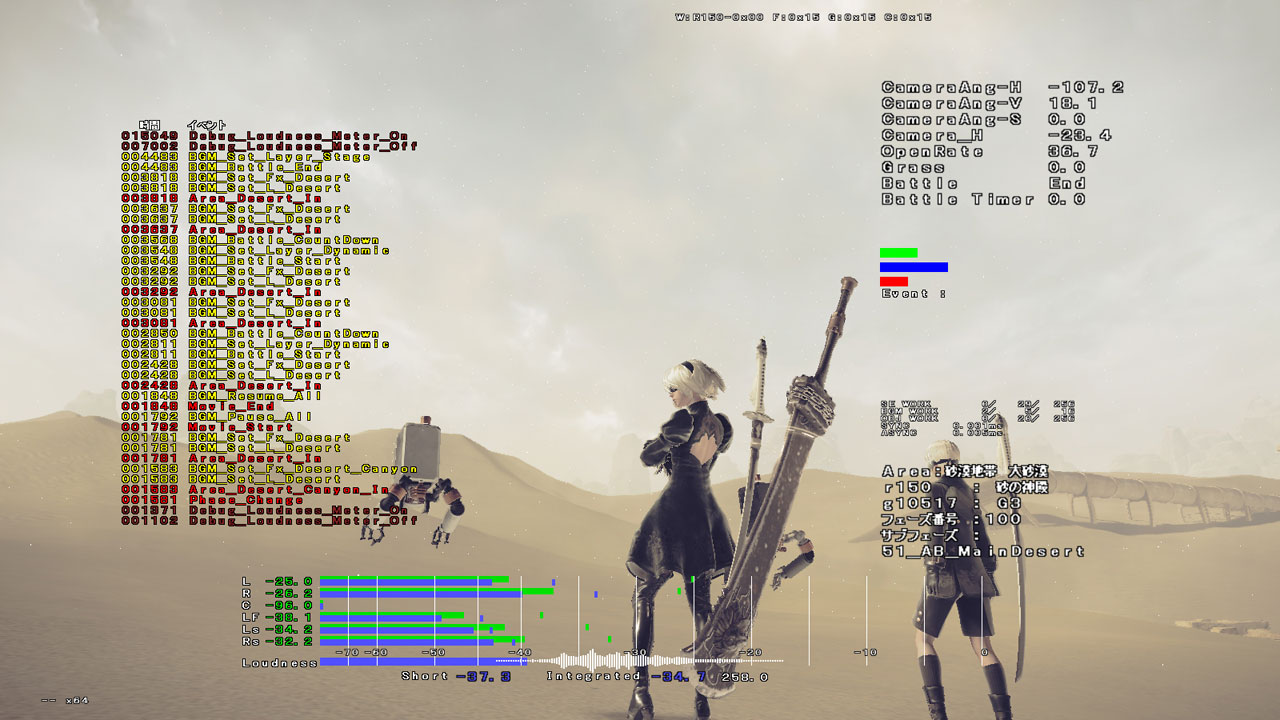 For NieR: Automata, I’m only in charge of implementing music and ambient sounds that other artists have made into the game, but even then I’ve been able to focus and be picky about getting the best implementation I can. In fact, I’ve done more effects processing and interactive controlling on the audio for NieR:Automata than I ever have before.

While I say I’ve been picky, I’ve also been careful to keep a light touch, making sure that I draw out as much of the greatness of the music as I can. Music for the game is being completed at a steady pace, and I’ve been making good progress putting it into the game as it rolls in. It’s rare for this sort of implementation work to be as pleasant as it has been for this project, so I’ve been very grateful for that.

It may be because I’ve had the pleasure of meeting with Keiichi Okabe (composer for NieR:Automata, the original NIER and much more) a few times before, and I feel like we’ve gotten along fantastically, partly because we are of a similar generation. He seems like an incredibly nice guy – and a big eater, too. The kind of guy who’ll show up to a company dinner party having already eaten beforehand!

Once Mr. Okabe explained to me that he was focusing on keeping the music simple, but listenable. The sense that I got from him was that music that goes down smoothly when you listen to it – music that you can love listening to over and over again – comes from the impression provided by the vocals, and how pleasing the lyrics sound on the ear.

I know you’ve all been waiting for a new NieR title for quite some time, and I’d do anything I could to get it to you even one second earlier! But please bear with us just a little bit longer!