Taking an extradimensional invader and turning it into a weapon to save humankind! How romantic! That’s the idea behind the Legions in ASTRAL CHAIN: fearsome enemy chimeras, harnessed to become the ultimate weapons. And I was lucky enough to get to make the 3D models for these amazing alien characters!

I’ll warn you beforehand that this devblog is gonna get long. I’ll divide into two parts – one for the Legions and one for the chimeras – so I can tell you all about these models that I put so much time, effort, and love into creating.

Without further ado, on to the Legions! 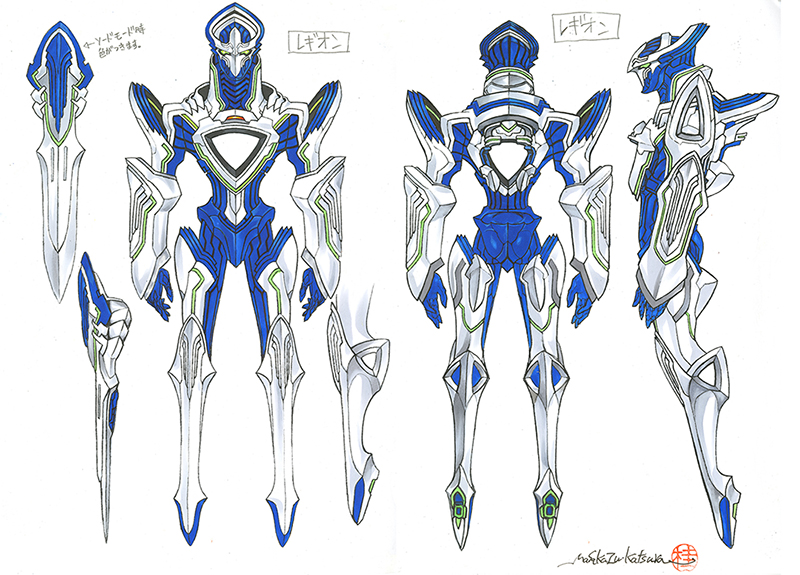 This is where it all started. This is the original Legion design, straight from famed manga artist Masakazu Katsura himself. Those complex surfaces! Those flowing curves! That distinctive face mask! There’s no doubt about it, this is a Katsura original! If you’re familiar with his work on ZETMAN or Tiger and Bunny, his touch here is unmistakable.

With this design in hand, I sat down with ASTRAL CHAIN art director Hajime Kimura – a longtime coworker and personal friend – to work out how to capture as much of that Katsura charm as possible in the 3D in-game model. 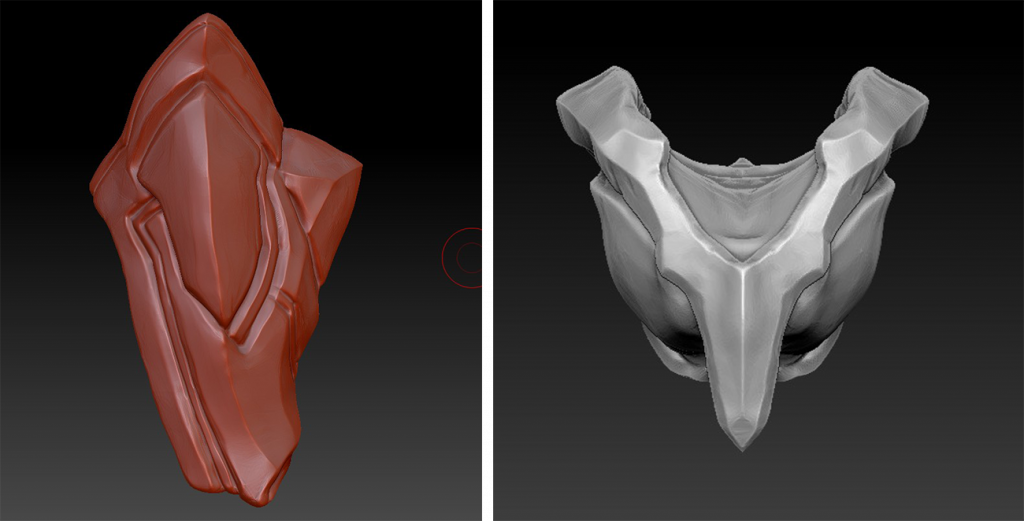 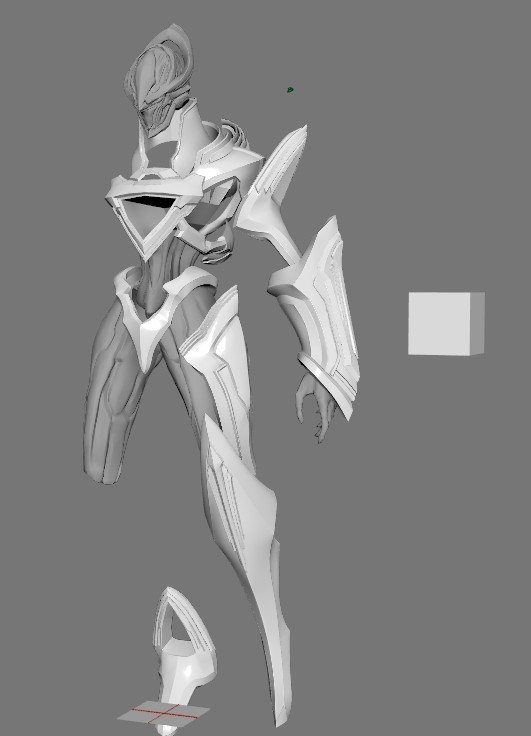 I started off by making a rough, chunky “sketch” of the Legion in a 3D modeling program called ZBrush. Making this sketch gave me a better sense of the volume the character needs. After that, I added more polygon edges to define the various parts of the model in another sculpting program called Maya. I finished up my work in Maya by converting the model to a smooth mesh, then sent it back to ZBrush for final adjustments.

Maybe it sounds like I doubled up and did a lot of redundant work. But Katsura’s Legion design presents a special challenge to a modeler, in that it feels like a living thing, but also like a sleek, manmade machine. When I tried only using ZBrush, or only using one other digital modeling tool, I found I couldn’t quite capture both those aspects of the original design. So I decided to use two! It took more time and effort, but it was worth it. I’m satisfied with how the Legion turned out, and how distinct it is from the chimera enemies! 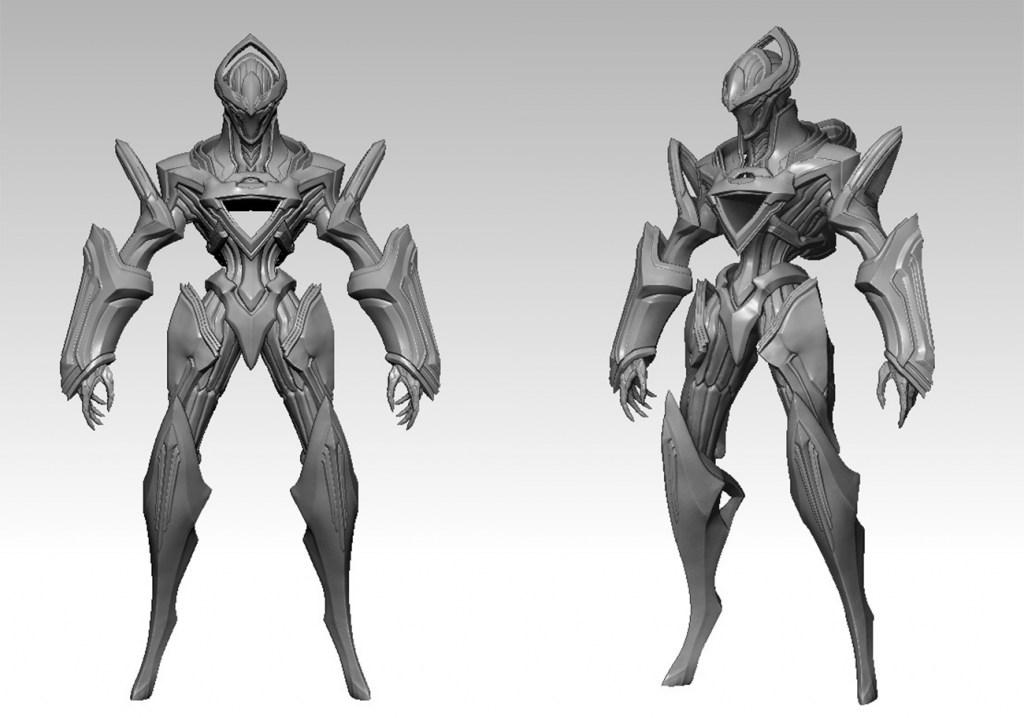 Here’s the completed high-poly model! I tried to distill the composition and charm of the original design into a solid, three-dimensional model suitable for an action game.

The Legion’s legs called for special attention. You see, the Legion typically floats in midair, but sometimes it has to stand strong and anchor itself on the ground. If the legs were too bulky, the Legion would look strange hovering around. But if they were too thin, it wouldn’t look believable holding its own on the ground. This was a tricky point to nail, and I had to check the model in-game and readjust it over and over again before I felt like I’d finally gotten it right! Another challenge was making sure the faceplate had that perfect Masakazu Katsura look to it. This was a good excuse to buy a bunch of Tiger and Bunny action figures. You know… As reference materials…

Once the ultra-detailed high-poly model was finished, I converted it to the lower-poly model that actually appears in-game and applied textures. 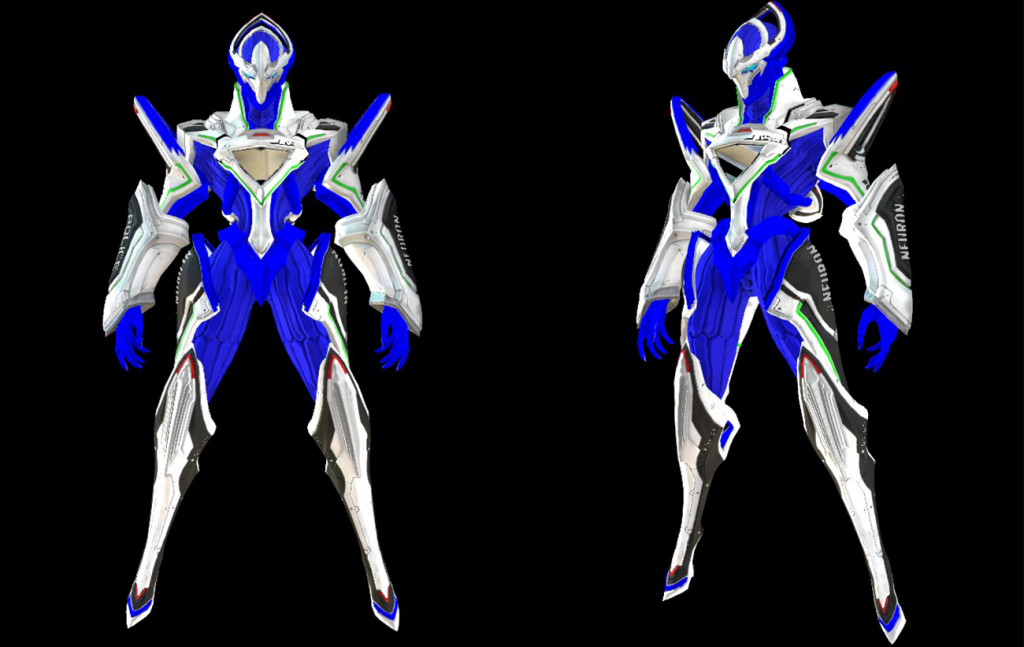 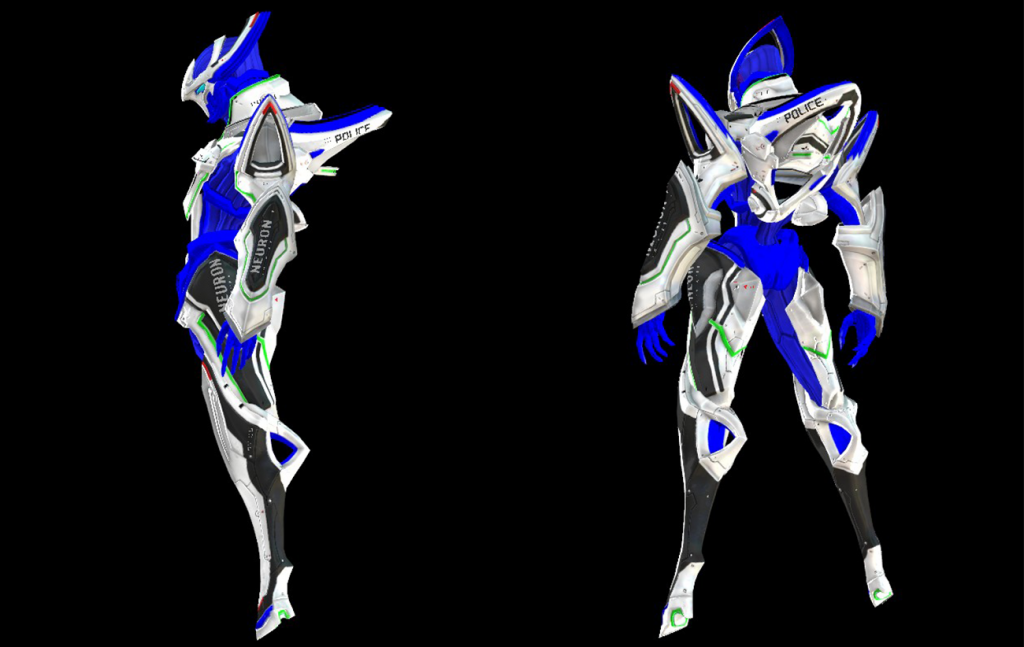 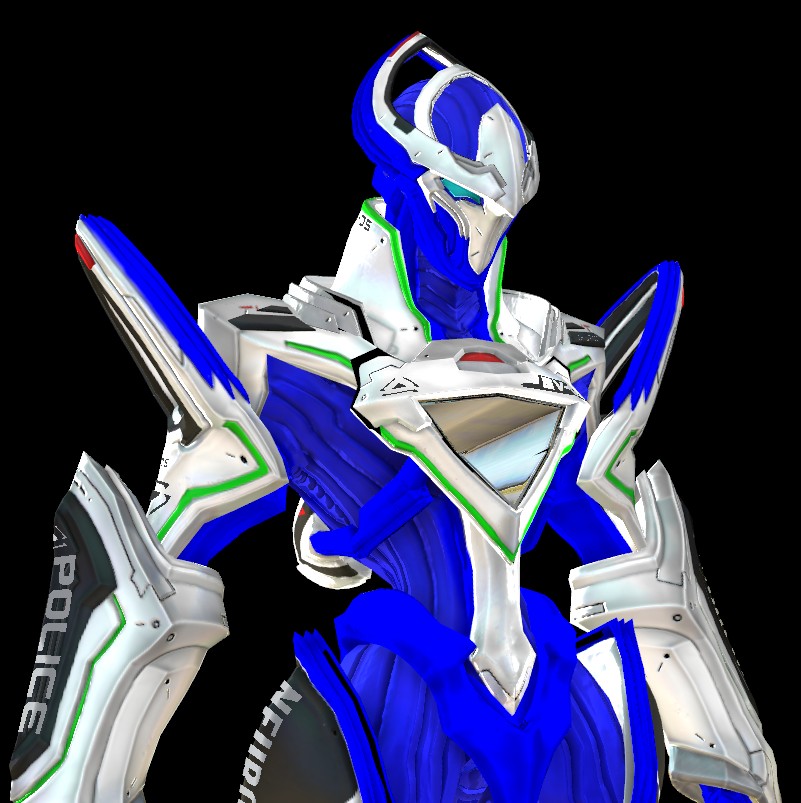 Now you’ll notice some details that aren’t in the original design; a few POLICE decals here, some extra trim there. Partway through development, someone wisely pointed out that the Legions aren’t just alien creatures – they’re also official police equipment! Their final models capture this duality, I think. (Positioning those decals juuuust right was harder than you’d think!)

Okay, so the model looked pretty good, but that wasn’t enough. This is a Platinum title, after all, so it has to move – sometimes quite dramatically. Getting the model ready to take anything our animators dished out took so much work, I’m tearing up a bit just thinking about it! Making sure it looks good in any pose called for some creative adjustments…

For example, watch closely and you’ll see that the armor itself changes shape around the Legion’s movements. This keeps the thigh armor from intersecting with the calf armor, which would definitely not look cool.

The armor also changes shape with the movement of the Legion’s wrists. Thanks to little tweaks and tricks like this, the Legion’s overall shape doesn’t break down, no matter what wild poses it makes! Or at least it probably doesn’t! Either way, it shouldn’t! 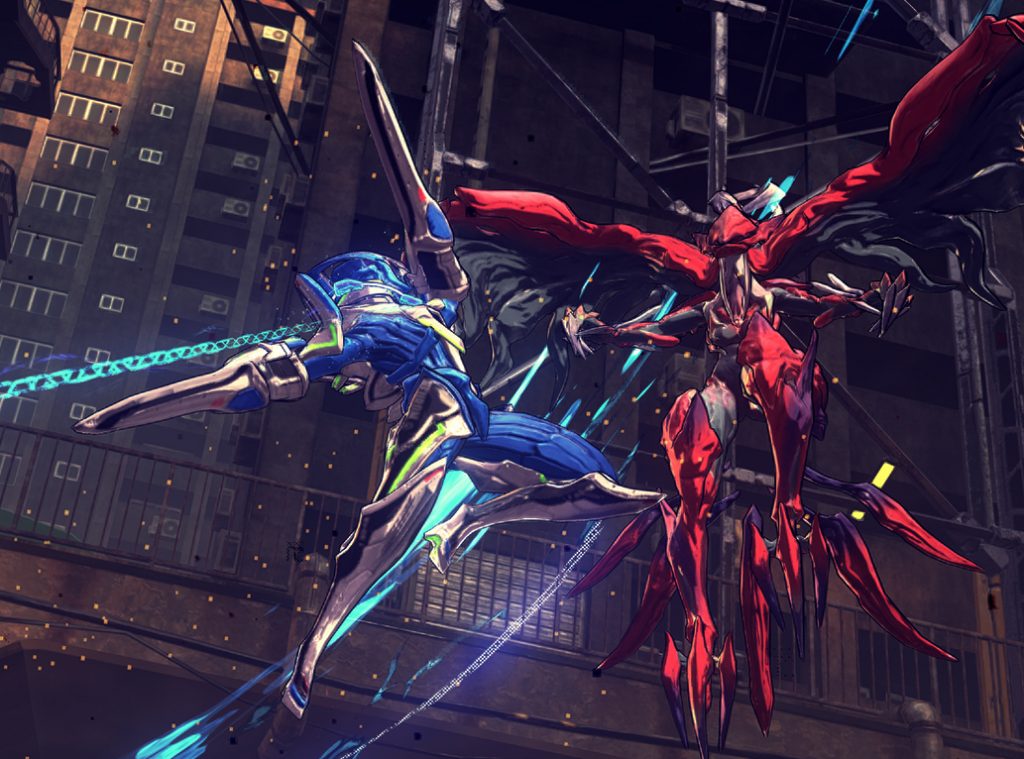 As you can see, I could go on and on about the Legion for a while. That’s because the Legions are very important to ASTRAL CHAIN – they’re practically the game’s mascots! So there was a whole lot of pressure to get them just right. It took Kimura and me several discussions, arguments, out-and-out fights, and a whole lot of trial and error to arrive at the final models. But considering how cool they ended up, I’d say it was all worth it in the end!

I hope you enjoy wrecking chimera after chimera with these Legions! I worked really hard to make them for you, after all. And if, while you’re playing, you ever feel the need to stop and think, “wow, these Legions are so cool,” well… I agree with you!

Thanks for sticking with me this long! Hold tight for now, and I’ll be back to fill you in on the chimeras soon! Please look forward to that! 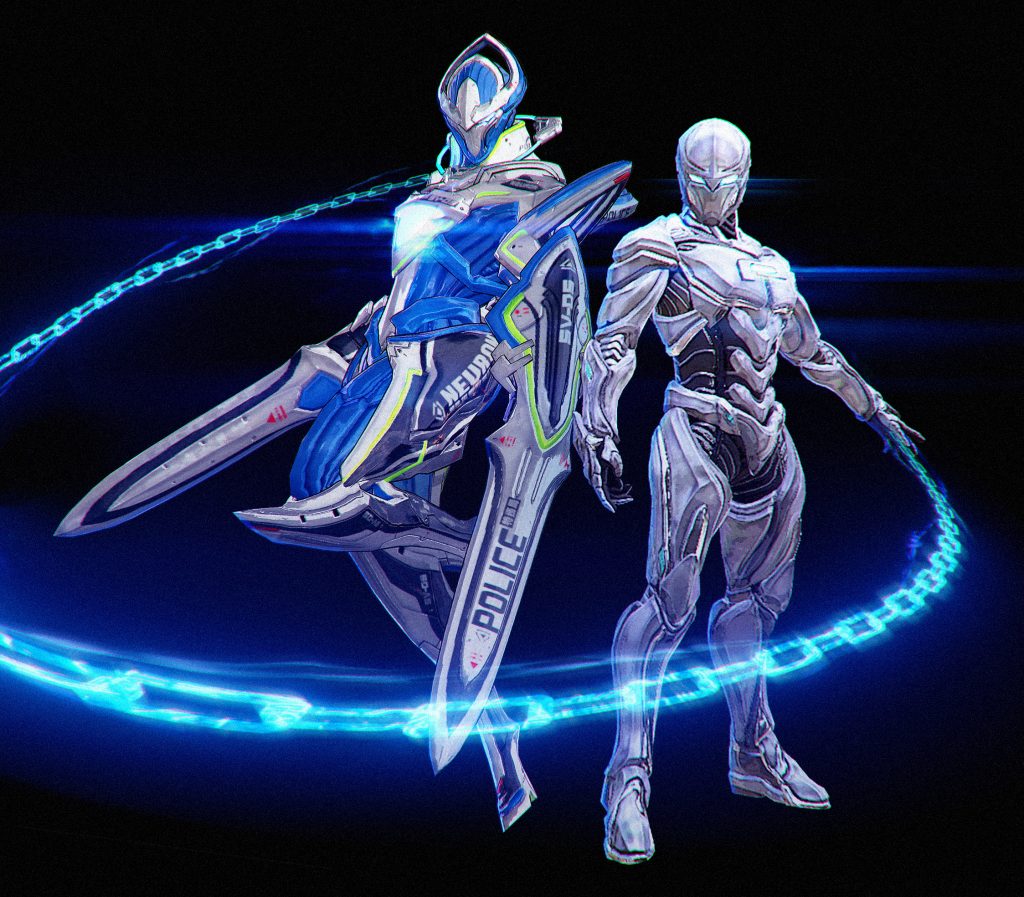 I was hoping I’d get to do this! (Okay, so all I did was hand the raw materials over to Kimura and he put the characters together like this for me…) You recognize the handsome fellow on the right, don’t you? That’s Platinum Man (or as some may call him, Chief Executive Omni-Weapon KEN-ICHI)!

Disclaimer: Sorry to disappoint you, but Platinum Man will not be appearing in ASTRAL CHAIN. Thanks for your understanding!

Yoshikaze Matsushita
Yoshikaze Matsushita graduated from the Osaka University of Arts and joined PlatinumGames in 2014. In addition to modeling the enemy characters that appear in NieR:Automata, he also created director YOKO TARO’s famous “Emil Head” mask!