Hello. I’m Takahiro Iwagami, the cinematic artist in charge of facial animation for ASTRAL CHAIN. Today I’d like to tell you all a bit about the main characters’ facial movements!

The characters in ASTRAL CHAIN were designed by a famous manga artist named Masakazu Katsura. I knew I had to make these characters expressive and emotional enough to do his designs justice – lest I incur the wrath of his many fans! I spent a lot of time poring over Katsura’s work, from artbooks to manga like ZETMAN and Tiger and Bunny, to let the expressiveness of his characters really sink in.

The main character of ASTRAL CHAIN isn’t completely unvoiced; you can hear them calling out to their Legion as they fight. However, the main character doesn’t have any dialogue of their own in the main story cutscenes. Before I started animating anything at all, director Takahisa Taura and I discussed what overall impressions each character’s facial expressions should have. Taura told me, “I want players to be able to project themselves onto the player character, so they naturally feel like part of the game. So don’t give the player character any extreme expressions that might give them too much of a predefined personality.”

Throughout my animation career, I’d always taken it for granted that each character should move with a distinct rhythm, and have striking poses that are all their own. This was the first time I’d had to make facial animation for a character with no dialogue – and a main character, at that! Making expressions that met both Taura’s expectations and my own personal standards took a lot of time. Not to mention all the trial and error that went into animating all the other characters’ faces, too!

The player characters and a few of their expressions.

When I animate characters’ faces, I primarily work with a program called Maya 2016. Character models in games have a sort of digital skeleton called a “rig” that controls their animation. An important part of an animator’s job is constantly studying new, more effective ways to create these rigs. The characters in ASTRAL CHAIN have new facial rigs, built from the ground up for this game.

Animators use a concept called the Facial Action Coding System – FACS for short – to categorize human facial movements and how they express feelings. The facial rigs in ASTRAL CHAIN can render expressions based on FACS, but they also have functions that allow for adjustments in the positions of the eyes and mouth. This is important, because ASTRAL CHAIN’s characters aren’t particularly photorealistic. With these special rigs, I could create expressions so that what you see on-camera fits in with the anime and manga-like feel of Katsura’s character designs, without getting too hung up on the fixed positioning that photorealism demands. 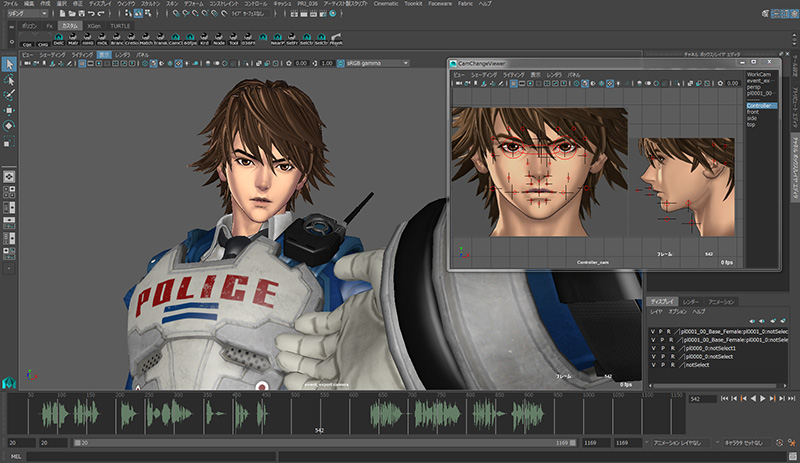 Creating facial animation for a cutscene in Maya 2016

As my devblog comes to a close, I’d like to say how honored I am to have worked on facial animation for ASTRAL CHAIN. Naturally, since I was working with designs from such a beloved creator, capturing the coolness and cuteness of his designs put me under a lot of pressure! However, I had a rock-solid facial animation team I could rely on, and we accomplished what we set out to do together. I’m very thankful to every member of my team.

Like I said before, the main character of ASTRAL CHAIN doesn’t have any dialogue of their own. But I think you’ll feel comfortable applying your own feelings and emotions to them as you play. As you spend time in their shoes, living in their world and surrounded by their fellow officers, I hope you’ll come to find yourself in-sync with how they might be feeling in any given situation. Please enjoy ASTRAL CHAIN!