Hi again! This is ASTRAL CHAIN lead composer Satoshi Igarashi. As I mentioned on last week’s devblog, I wrote and produced most of ASTRAL CHAIN’s background music, and handled its overall technical implementation, too.

Last week I told you a bit about the vocal music featured in ASTRAL CHAIN, so this time around I’d like to go over our process for composing background music. I’ll also be sharing some clips of songs straight from the soundtrack, so get ready to listen!

In addition to myself, two other PlatinumGames composers worked on the score for this game: Naofumi Harada and Hitomi Kurokawa. We had some outside help, too, from Masahiro Aoki (of Vivix) and Satoshi Setsune, who primarily worked on music for the cutscenes.

At its core, the music in ASTRAL CHAIN is made up of elements from three genres: Metal, electronic and orchestral music. Each of these genres plays a distinct role in matching the music to the mood of a scene. Picture them on a chart like this: 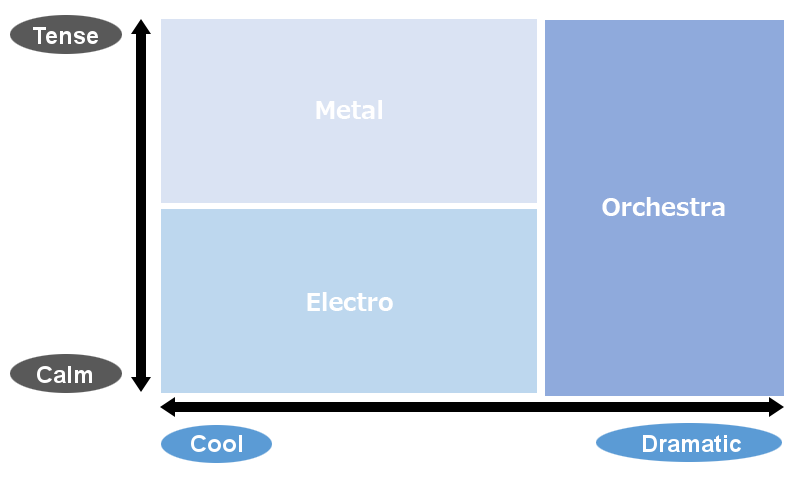 On this chart, as you go right towards more dramatic scenes, you find the orchestral pieces. And the higher the tension in a scene, the more metal the music becomes. For example, in quiet areas where there aren’t any enemies around, the music should be cool and peaceful – there, you’ll find an electronic piece. Of course, there are exceptions throughout the game, but these were our general guidelines for what sort of music to make.

In the early days of development, I talked with director Takahisa Taura about what sort of music he wanted the game to have. He strongly insisted that the combat music should be cool, with a rocking beat, and stand out dramatically from the non-combat background music. ASTRAL CHAIN’s score is built around that distinction.

Rock, as a genre, is very broad, with nearly infinite subgenres and variations. Starting with an overall image of ASTRAL CHAIN’s near-future setting, I knew that the music couldn’t be too brutal or murky. It had to be modern and cool, with a touch of something inorganic and mechanical about it. Specifically:

Sticking with me so far? Don’t worry, those music samples I promised are coming right up. Each area of the game has its own combat and non-combat music for you to enjoy, and I’d like to start off with some of the calmer, non-combat music.

This background music appears in out-of-combat situations in a major shopping mall on the Ark. I know this particular sample is decidedly on the electronic side of things, which I’ll get to in a second, but for now please listen for comparison’s sake! This non-combat music lacks strong percussion or heavy guitar, and keeps the tension pretty low in general. That’s so we get maximum contrast the contrast when the combat music kicks in…

…like so! This is the standard combat music for regular fight scenes in the mall. As I said before, ASTRAL CHAIN’s combat music is primarily built around metal guitar sounds. As far as genre goes, this piece is more rock than anything else, but it still has some of those electronic sounds mixed in to emphasize the near-future sci-fi setting. Since these fights take place in a major shopping center, I tried to give even the combat music a bit of a cosmopolitan feel.

As you play ASTRAL CHAIN, keep your ears peeled for these contrasts between combat and non-combat music!

I wanted to keep the metal-style drums and guitar locked in to combat music to make the fight scenes stand out loud and clear. That meant that out-of-combat scenes need a relatively calm, peaceful approach. ASTRAL CHAIN is set in a future not too far off from our own, with plenty of advanced electronics on display – holograms, augmented reality, and so on abound. Even the Astral Plane and the chimeras themselves are portrayed as solid digital data. And what better way could there be to emphasize the futuristic, digital nature of the setting than through electronic music?

This is the background music for the police station where the Neuron officers go about their day-to-day work. Neuron HQ is their refuge from the dangers of fighting chimeras, so the music can’t have too much tension. If you scroll back up to the genre chart for a moment, you’ll find this sits comfortably within the “electro” area at the bottom left.

It isn’t too relaxed, or too dramatic; it doesn’t swell majestically and it isn’t too cool. In short, it’s a natural choice to accompany the everyday scenes you’ll spend with your fellow officers during downtime. However, Neuron HQ is a very important place in-game, so I didn’t want this music to melt completely and forgettably into the background. Balancing those seemingly contradictory goals was a big challenge as I wrote this song, but I think the result fits ASTRAL CHAIN’s setting like a glove.

Turn up the Drama!

Most of ASTRAL CHAIN’s combat scenes come with rock music, but there are a few points that call for a little more pathos – climactic boss battles, for example. When metal and electro don’t quite cut it in terms of drama and scale, that’s when we bring in the big guns: massive orchestral sounds.

You’ll hear this during one of the boss fights. This boss is a big one, and needs music to match. The orchestra gives this piece more tension and a greater sense of scale than the mall combat music I shared earlier.

But of course, the orchestra you hear here is no ordinary orchestra; we’ve added synthesizers and digital percussion to the mix to make sure the music is unmistakably from ASTRAL CHAIN. This helps it fit in alongside the music from other genres.

If you’ve listened carefully to all these samples so far, you’ve probably noticed something. The electro pieces have a touch of guitar; the metal and orchestral pieces have synthesizers on display… There’s more than a bit of genre-mixing going on. Combining genre elements like this (a touch of metal here, a dash of electronica there) keeps ASTRAL CHAIN’s score sounding cohesive all over the Ark. For example, there are electric guitars all throughout; sometimes distorted, sometimes clean, but almost always there.

You might recognize this one from the very first ASTRAL CHAIN trailer. The official title is a bit of a spoiler, so I can’t share it here, but you’ll definitely know it when you hear it in-game.

Metal forms the foundation of this boss theme, but the orchestra – not to mention the choir! – plays a huge role in shaping the melody. Going overboard on metal instrumentation might threaten to scale down the feeling of the piece, but I think the melody keeps it sufficiently dramatic.

This music plays at a very pivotal moment in ASTRAL CHAIN’s story, and hitting the right level of tension and drama was essential. According to our chart, then, it should be a fully orchestral piece, right? But it isn’t. There’s two reasons for that:

Let’s tie this all together with another look at our chart. 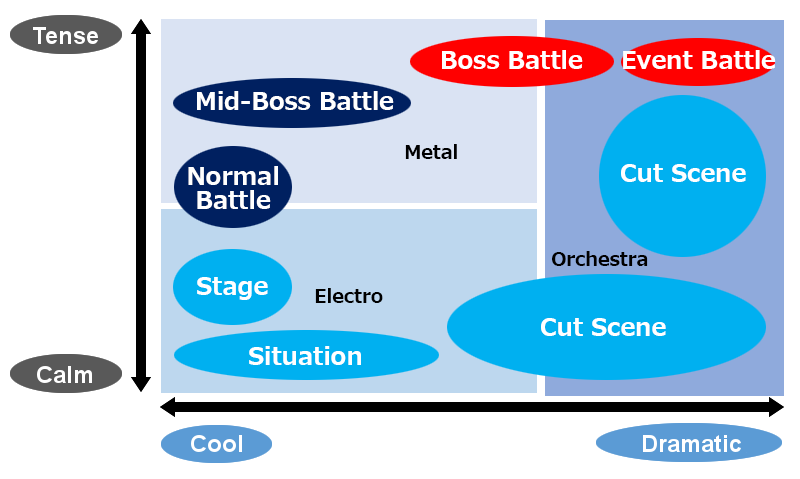 Each of the songs I’ve shared today fit roughly into one of the categories now marked on the chart.

“Task Force Neuron” – This is typical background music, so it falls under “Stage.”
“Ark Mall” – The non-combat version is also a “Stage” piece.
“Ark Mall (Combat Phase)” – Higher tension, but not a boss fight? You’ve got a “Normal Battle.”
“Homunculus α” – This is a quintessential “Boss Battle.”
[REDACTED]is high on story stakes and drama, so “Event Battle” is the best category for it. However, it’s a bit of an exception for the reasons that I mentioned, with strong metal elements as well.

I hope you’ve enjoyed this early peek at the music of ASTRAL CHAIN! One more thing before I sign off: As I mentioned before, I also worked on musical implementation – controlling how the music is played throughout the various parts of the game. I put a lot of care into making sure that…

…and even more little interactive touches beyond those. Be sure to listen for them as you play ASTRAL CHAIN!

Satoshi Igarashi
Satoshi Igarashi joined PlatinumGames as a music composer in 2013. Since then, he’s worked on music for Bayonetta 2, Transformers: Devastation, Teenage Mutant Ninja Turtles: Mutants in Manhattan and NieR:Automata.
As ASTRAL CHAIN’s lead composer, Igarashi wrote and produced songs for the game’s score, directed all music and handled the more technical aspects of musical implementation as well.