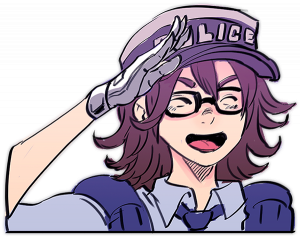 (Um, just so we’re clear, that’s not what I look like. That’s Marie, my personal favorite ASTRAL CHAIN character! Isn’t she cute?) 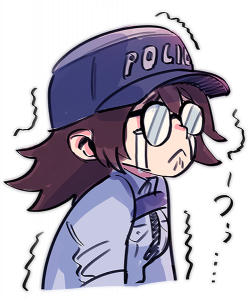 Art directors keep watch over a wide range of game elements and get really deeply involved with the development process! ASTRAL CHAIN represents a lot of firsts for me; it’s my first game as an art director, and also my first time working on a completely original title. It’s a huge milestone for me, and I’m excited that it’ll be in stores soon!

When you play ASTRAL CHAIN, you’ll work together with your partner-slash-weapon, the Legion, and pull off all sorts of dual combos to dispatch your enemies! 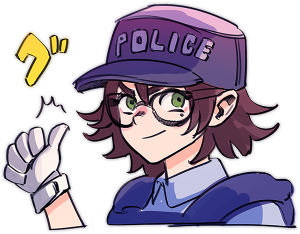 Each of the five Legions you’ll work with has its own special characteristics that you’ll come to rely on, both in combat and out, as they help you make your way through the world. Legions come in handy during routine police investigations, too! Today I’d like to share a bit of their design process with you. 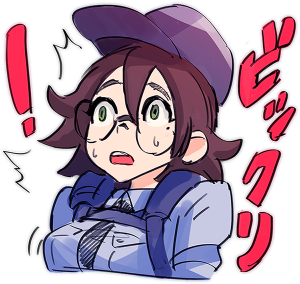 Oh, but first, I can’t talk about Legion designs without mentioning Masakazu Katsura! You’ve probably read this elsewhere already, but he’s the artist behind beloved manga like Tiger & Bunny and Zetman, and he designed the main characters of ASTRAL CHAIN! I’ve got to admit that when I heard he would be involved with the project, I could hardly believe it! I’ve been a huge fan of Katsura’s heroic designs for a long time, and now I’d get to work with them hands-on!

The first of the Legions I’ll be introducing today – the Sword Legion, the first one you’ll control at the start of ASTRAL CHAIN – was also designed by Katsura. Here’s his original design: 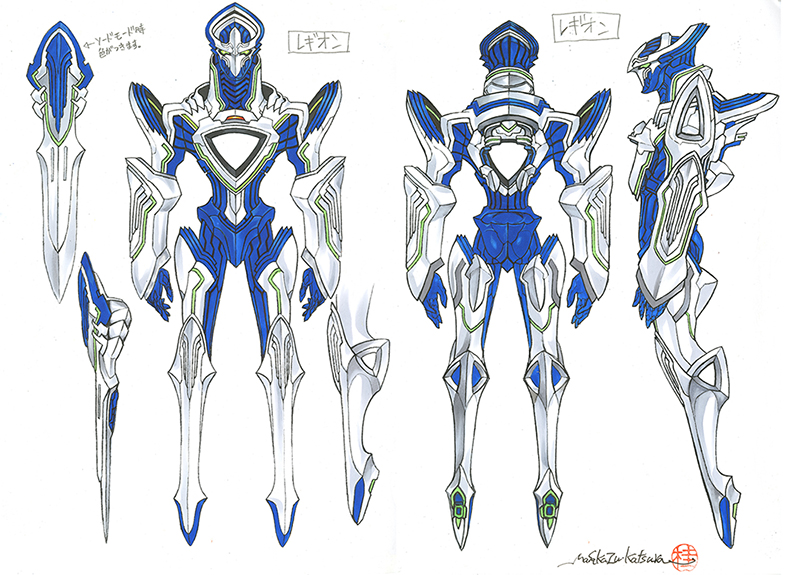 The Sword Legion has a unique silhouette, a little different from some of the characters that Masakazu Katsura has dreamed up in the past. Look at those flowing lines! It’s a suitably heroic design for an elite living weapon. Someone, please, make this into an action figure, pronto!

This was the first Legion design we had, and it became the base for the designs of the remaining four. Now I’d like to turn back the clock a bit and reflect on those early design stages… 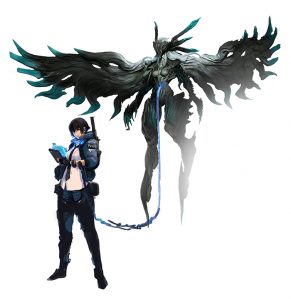 Let’s go back to the beginning. In fact, in the earliest stages of development, there wasn’t anything called a “Legion” at all. Your “partners” were simply enemy chimeras that you captured throughout the game. They might look something like you see here. But then we decided that the main characters needed actual, established partners to seem like part of a heroic police team. Thus the Legions were born.

Here are a few ideas we prepared in-house before we had Katsura design the Legion for us:

These early drawings are pretty rough, but as you can see, we started with a humanoid Legion. This would reinforce the idea that it was the main character’s partner, rather than just a tamed monster or weapon. We had long, hard talks over how far to take it. Should the Legion have eyes? Should you be able to actually talk with it? This was about when we started experimenting with tokusatsu aesthetics, like you might see in Japanese costumed hero TV shows like Ultraman or Kamen Rider.

At this point, the main characters themselves were still in the brainstorming stage. We tried Legion designs that changed based on the player character’s gender. Then we thought of having the Legion take on different “classes” as they leveled up: a stoic paladin if you prioritized defense, a ninja if you focused on speed, and so on. 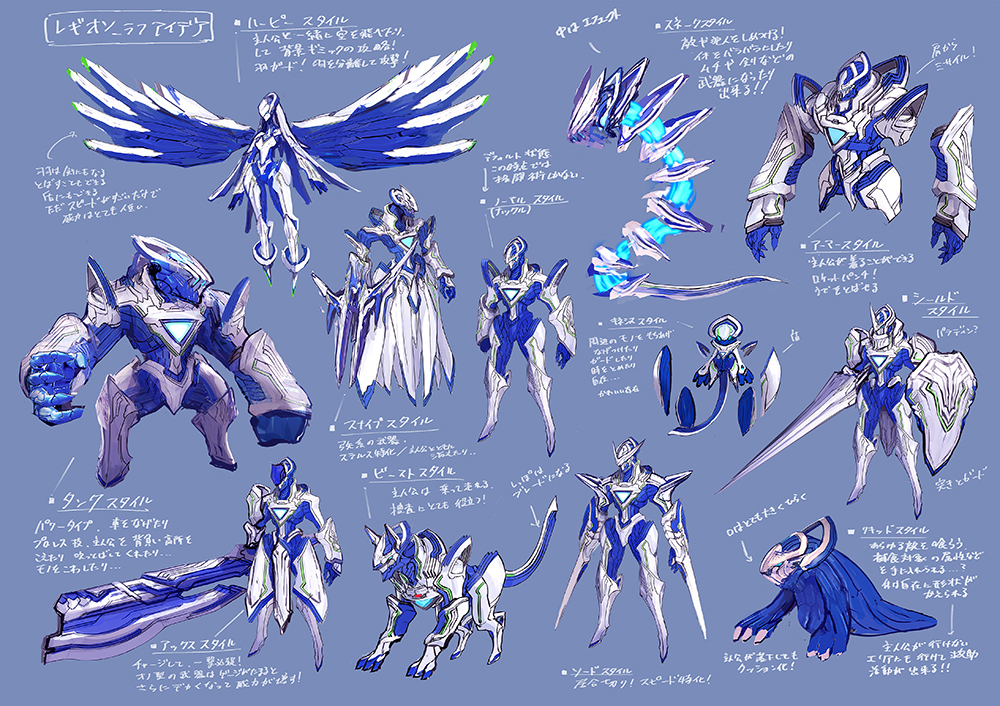 After that, we received that first Sword Legion design that I showed you from Katsura. We thought the details and parts he’d put on the head and shoulders were particularly cool, so we used those as a reference as we continued to brainstorm non-humanoid Legions as well. You can see some of those ideas in the art above. 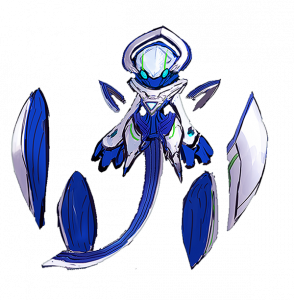 If you read animator Marumi Nakajo’s devblog, you can see even more! Some of our ideas included a snakelike Legion that would change shape along with the player’s weapon and a birdlike flying Legion. Personally, I was fond of this tiny, defense-focused Legion idea.

Next, we narrowed down Legion types and refined their designs, taking care not to repeat in-game roles or design elements too much. At last, we had the five Legions that appear in ASTRAL CHAIN!

Left: An early rough design. Right: The Axe Legion as it appears in-game.

Offense and defense, the Axe Legion does it all. The Axe Legion can shatter enemy defenses with slow, powerful attacks, but it can also keep its human partner safe from harm with a force field of its own. And look at the size of that weapon! It’s big enough to decorate like the door of a police car. (All Legions have markings and details like this one to make them stand out against the Legion enemies; this POLICE decal is larger than most!)

The Axe Legion’s body is fairly similar to the Sword Legion’s, with some additional asymmetry to make sure they’re distinct. Note the increased armor on the right side, and larger plating on the lower body to convey a focus on balance and power.

Left: An early rough design. Right: The Arm Legion as it appears in-game.

Rocket Punch! Take that! This Legion came about in response to demands for a partner that could fire off its fists and pummel enemies. The Arm Legion’s massive arms aren’t directly connected to its body, and it can use them to grab heavy objects and pull enemies over from a distance. It looks like a piece of heavy machinery, but it’s quite versatile! It has a few extra uses that might come in handy as you explore the Ark.

I remember the Arm Legion, chunky and robotic, being particularly fun to design!

Left: An early rough design. Right: The Beast Legion as it appears in-game.

Given the theme of a police officer teaming up with a not-quite-human partner, naturally the idea of K9 officers came up time and time again throughout development. Of course we had to include a dog-like Legion! With its advanced sense of smell, the Beast Legion is as good at tracking down perps as it is at fighting. It’s the fastest-moving Legion, and it lends its human partner some of that speed by letting them ride on its back.

Speaking of… designing the back parts of this Legion was especially challenging. It had to look natural with and without the player character riding on it, so it couldn’t have any details that would bump into the player character’s model. I spent a lot of time working closely with the 3D modelers to make sure riding the Beast Legion looked just right. Luckily, riding the Beast Legion feels great, so it was easy to stay motivated! 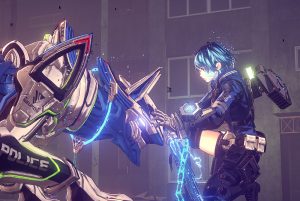 Before we continue: I know what you’re thinking, and I’m glad to say that yes, you can pet the Beast Legion.

Left: An early rough design. Right: The Arrow Legion as it appears in-game.

The graceful Arrow Legion hovers in the air without a sound and strikes and enemies from long range. It was originally conceived as a stealthy Legion specialized for infiltration missions. Its giant, bowlike weapon is a major part of its unique silhouette, and I imagined it bullseyeing wave after wave of enemies as I designed it. Its floating parts move with the angle of the bow, to avoid interference with the ground. 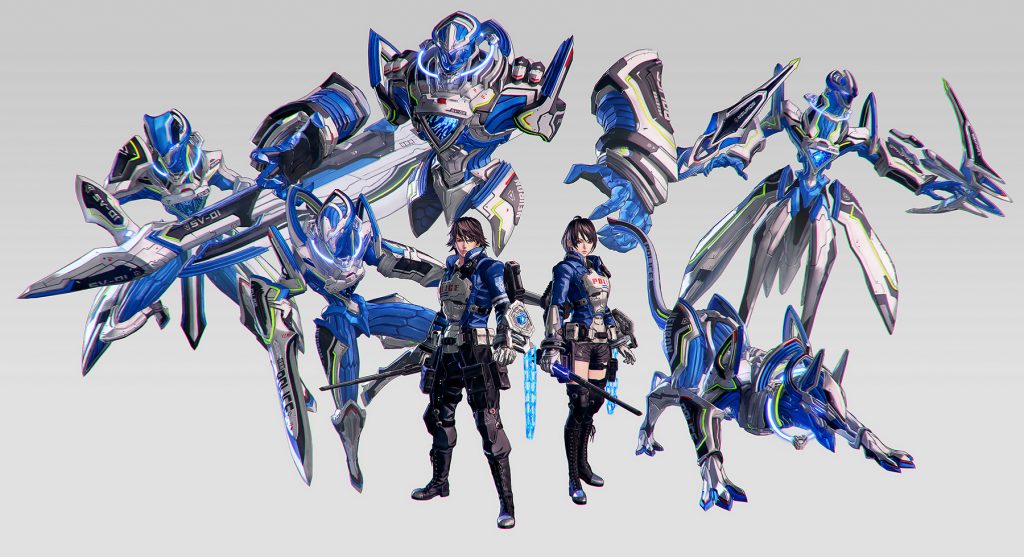 And here’s the whole crew! Arriving at these Legion designs took a lot of effort, from faithfully replicating Katsura’s original Sword Legion design, to long hours of trial and error with the 3D modeling artists. I hope you enjoy them – and hey, don’t forget to use your in-game camera to take shots of them if you think they look particularly cool!

There’s plenty more I’d love to share with you, like enemy chimera designs, or some of your Neuron squadmates, but this devblog’s already running pretty long. I really should call it a day…

… But first, how about a quick look at some of the artbook that’s included in the collector’s edition?

“Persistent, aren’t you? Okay, but just a peek…”

As you can see, these pages offer a closer look at some of the Legions I wrote about here.

And here’s Captain Maximilian Howard! He’s just one of the NPCs you’ll get to know when you join NEURON. I’m proud to see my work included in an artbook like this! Hopefully you’ll get a chance to check it out.

Hajime Kimura
Hajime Kimura joined PlatinumGames as a concept artist in 2014. As ASTRAL CHAIN’s art director and character concept artist, he’s played a major role in directing and designing all aspects of the game’s visual