Hello, everyone. I’m Akiteru Naka, the designer in charge of the main storyline in ASTRAL CHAIN.

Now, the game just came out last week, so I can’t really get into spoiler territory on this devblog! Instead, I’d like to introduce myself and then explain some of the twists and turns that went into creating the story. If you want more story details than that, for now, the best thing to do would be to play the game!

Okay, so. Most of you reading this are probably wondering, who’s this Naka guy anyway?

I’ve been a game designer at PlatinumGames for eight years, which makes up most of my career in the games industry. As a designer, I usually take a backstage sort of role in development. My hobbies include playing action games, drawing (as you’ll see below) and making pixel art. Games are incredibly important to me – I need them like I need air and water.

I’ve been a designer on several of PlatinumGames’ titles, including Anarchy Reigns, Metal Gear Rising: Revengeance, Bayonetta 2, Star Fox Zero and more. But, truth be told, up until now I haven’t had many chances to work on any one game from the very start of its development.

Despite that, director Takahisa Taura set eyes on me for ASTRAL CHAIN. Now, we don’t really have one ironclad process for making games here at Platinum, but I always thought that it was up to the director to write the script. They’re the most knowledgeable about how the game should play, after all, which is essential for crafting a fitting story.

I figured that it would be the same for ASTRAL CHAIN – that Taura would write the story himself. However, this was back before we’d settled on how the game’s core idea of “dual action” would play out. Perfecting that while also coming up with the entire story was too much for one person to handle. I was already working on text for the user interface and other descriptive bits when Taura asked me to take charge of the game’s story as well.

At first, I thought he just wanted me to take dictation as he worked out the story. Still, it was a chance to get in on the ground floor, so I accepted right away. Why not, right? In retrospect, I should have realized I was treading into waters both dangerous and deep…

Early on, Taura, art director Hajime Kimura and I got together for a brainstorm session. With Nintendo helping guide the way, we combined three big-picture themes that we all liked: superheroes, police and a near-future setting. There’s a lot that might seem a bit off-kilter or appealingly teenage in the game – some of the side characters, for example, and how the player character poses and calls out when they summon their Legion – and a lot of that came from these early brainstorming sessions as well. 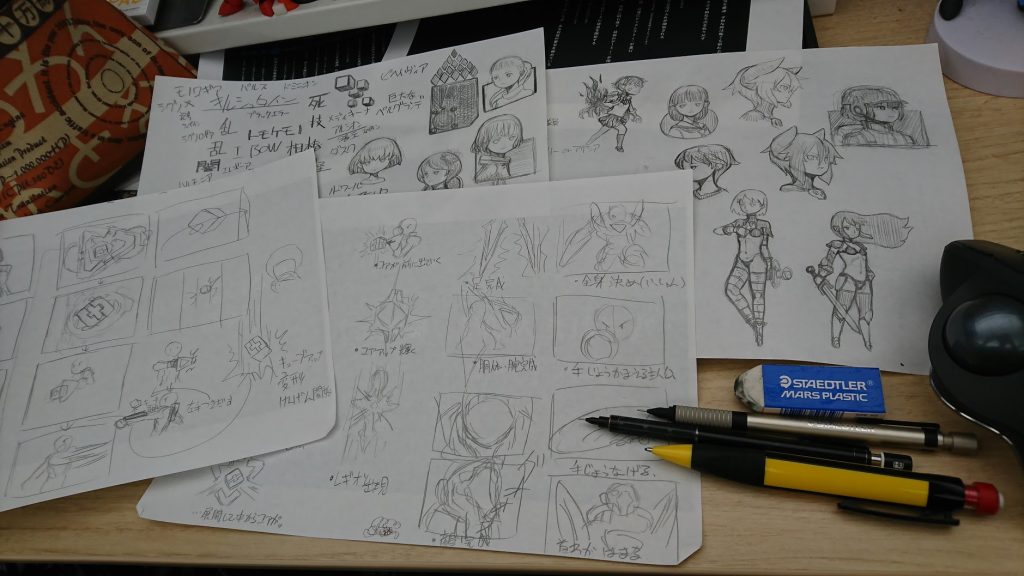 Every time I came up with an idea for the story, I sketched it out like this. I’ll admit there were times when I made more progress on doodling than on actual work… I thought I’d have more early idea sketches to show you, but it turns out that too many of these pages are covered with completely unrelated material to share here. Whoops.

Once we’d established our themes for the setting and story, it was time to get started on a draft. I dug deep, wrote and rewrote, trying to come up with something that connected directly to the gameplay, without anything strictly nailed down beyond those initial themes.

Soon it became clear to me that I could use some help. Luckily, I got assistance from Nintendo, as well as words of advice from PG chief game designer Hideki Kamiya. At last, I had a fully-realized setting, and soon everything I’d been struggling to connect came falling in line like a chain reaction. The result is the story as it is now.

Those story changes can have consequences on other parts of the game, too, of course. For most of development, there wasn’t much of a connection between the Legion and the player character, or at least not much of one beyond that between weapon and warrior. However, with the final setting, the Legions had become much more than simple tools. They’re based on the enemy chimeras themselves, after all. This turned them into essential but dangerous partners that could go rogue at any time – and you’re tethered right to them.

This story detail even dictates how the Legions should move! At first, the top priority for their actions and animations was just to look cool; however, once we settled on that bit of the story, we had to tweak the Legion animations to underscore the low-key but ever-present danger. The end result really makes the Legions stand out, even when standing at idle:

… So you can see I had a lot of help and support from the team. And the result is something I’m really proud of.

In addition to the main storyline, ASTRAL CHAIN is loaded with side quests and other story content from the rest of our game design team! (I did make some tweaks to the dialogue, though.)

I hope you enjoy exploring the Ark, talking to all its colorful characters (like your Neuron squadmates) and cracking cases. The more you explore, the more you’ll learn about the world of ASTRAL CHAIN!

Thank you for reading. If I get the chance later, I’d love to come back and talk about the creation of some of ASTRAL CHAIN’s characters and give a few more minor details about the world we built!

Akiteru Naka
Since joining PlatinumGames in 2011, Akiteru Naka has worked as a game designer on Anarchy Reigns, Metal Gear Rising: Revengeance, Bayonetta 2, Star Fox Zero and more. On ASTRAL CHAIN, he wrote the main script and supervised side case content.