Hello, everyone! I’m Naoki Hiraiwa, sound designer at PlatinumGames. I created sound effects (SFX for short) for ASTRAL CHAIN, and also handled the technical implementation of the data that makes up those effects! For this devblog, I’d like to write a bit about some of the SFX that play a special role in the game.

Now, artists have all the luck when it comes to writing devblogs, because they can fill the screen with concept art and other visuals! Unfortunately I can’t really show you sound. Still, I hope you’ll come away from this look at the making of ASTRAL CHAIN’s sound effects with a greater appreciation of all the effort that went into the game! 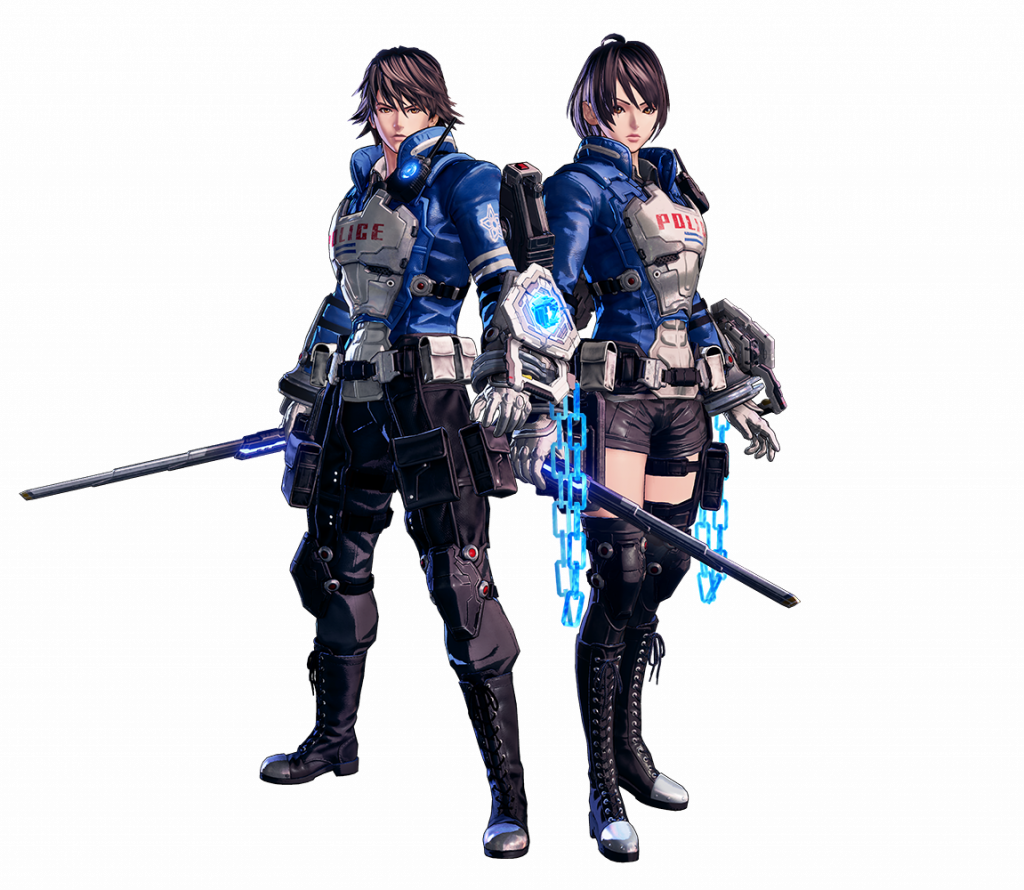 The main character of ASTRAL CHAIN and their twin Akira. But which is which…?

Soon after you start up ASTRAL CHAIN, you’ll choose which of the Howard twins you want to use: the brother or the sister. Naturally, the choice you make will have a pretty big effect on how your character looks, but it’ll also make a difference in how they sound!

The twin you choose doesn’t have many lines of dialogue of their own, but you’ll spend a lot of time listening to their efforts. That’s what we call all the grunts, groans and growls you hear whenever a game character attacks, gets hit, falls down, you name it! They’re small details, but I think they have a huge impact on how it feels to play a game. Male or female, Japanese or English, all of our voice actors did their best to make their combat performances believable. And that’s hard work! If you don’t believe me, try pretending you’re swinging a baton and getting smacked around by chimeras for a couple hours.

While playing ASTRAL CHAIN, you may encounter some of the froglike enemies that we call Slime-type chimeras. These are some of my favorite chimeras in the whole game! They’re round, squishy and a little cute.

These are several types of Slime. Some of them are infused with fire, electricity or ice; some are big, and some are little. All of these traits have an impact on how each Slime should sound as it moves and attacks! You won’t have many chances to directly compare the differences in these SFX while you’re playing the game (not to mention you might be a little distracted), so have a listen here…


In this video, you can hear how the sound for the same attack changes for different elemental enemy variations. Using software called Wwise, we started with a base sound effect, then layered in additional SFX we’d prepared for each of the three elements – fire, thunder and ice – to create these variations. One nice thing about this approach is that if the game designers decide to add a new elemental attack type, we can create appropriate SFX variations for it with relatively little effort.

There are also a few systems in place in ASTRAL CHAIN where sound effects help you out as you play. One of these is the Beast Legion’s item-searching ability. When the Beast Legion detects an item nearby, you’ll hear a sound that you can follow towards the spot where that item is buried. Then the Beast can get digging! You can use the Beast Legion to find items while you’re just wandering around, too, by the way – not just during investigation scenes.

That’s not the only SFX guidance system in ASTRAL CHAIN, either. Keep an ear out while you play and you might hear some hints towards secret routes…

Thanks for reading, and please enjoy ASTRAL CHAIN!

Naoki Hiraiwa
Naoki Hiraiwa joined PlatinumGames in 2014, fresh after graduating from school for audio design. On ASTRAL CHAIN, he created and implemented sound effects for boss enemies and more.