Hey everyone!
SOL CRESTA director Takanori Sato here. Maybe you know me as the guy lurking in the background on our live streams.

More and more information about our game has been coming out, and we’ve gotten closer to the February 22nd release date. I never really get used to that special tension that grips us right before release… I’ll just really be happy if you all enjoy the game!

With that said, today I’d like to introduce you to the cast of characters that bring life to the Dramatic Mode included in the SOL CRESTA Dramatic DLC!

Dramatic Mode isn’t just Arcade Mode with a script added, it’s a brand-new game mode with the level layout, timing, boss battles, and other elements specially added to “dramatically” boost the feel of experiencing a grand story. And if you get to know the characters in that story before you dive in, you’ll be able to enjoy it that much more. So let’s blast off and get to know them! 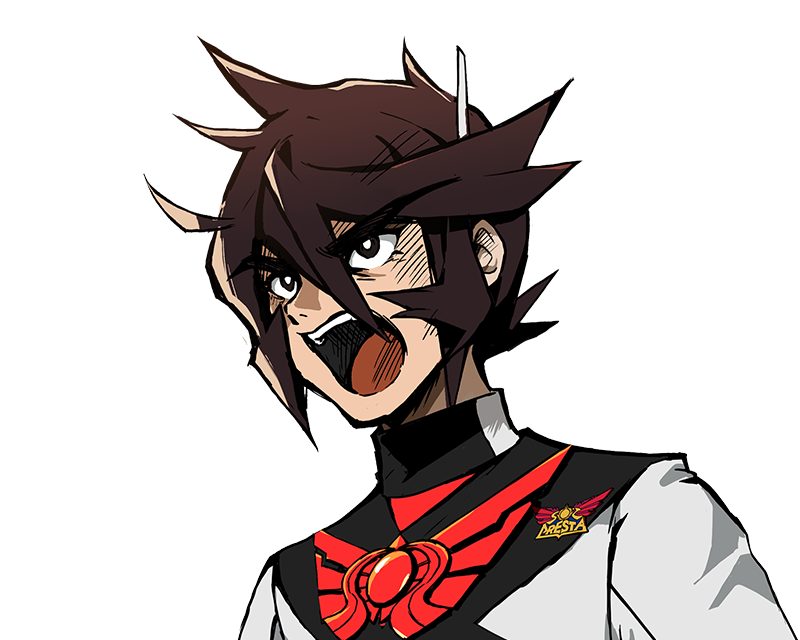 Sho Tendo/Male/Age 16 (CV: Masaaki Mizunaka)
A cadet with Solar Recovery Army Sol Cresta.
A passionate young man with a strong sense of justice, Sho does not keep his fiery emotions hidden.
He became the pilot of the Amaterasu, Yamato Unit 01, amid the chaos of the Mega Zofer attack on Amano-Iwato, humanity’s last stronghold.

Sho is your classic Showa anime-style hot-blooded hero!
He’s full of energy and raring to go, but not exactly the best pilot. However, he’s an upstanding guy and in battle he gradually matures.

Sho usually has a pretty intense expression, but he also shows some pretty comical ones (like when Dril is teasing him) so be sure not to miss out while you play!

It was somewhat difficult to come up with a design with that balanced elements that paid respect to that Showa-era (like his spiky hair and sideburns) while not seeming out of date, but I think his design came together quite nicely!

Actually, the reason Sho decided to become a pilot in the first place was the pendant he inherited from his father, a pilot who died in battle, and whom Sho looked up to greatly.
Come to think of it, I feel like I’ve seen his pendant’s design before… 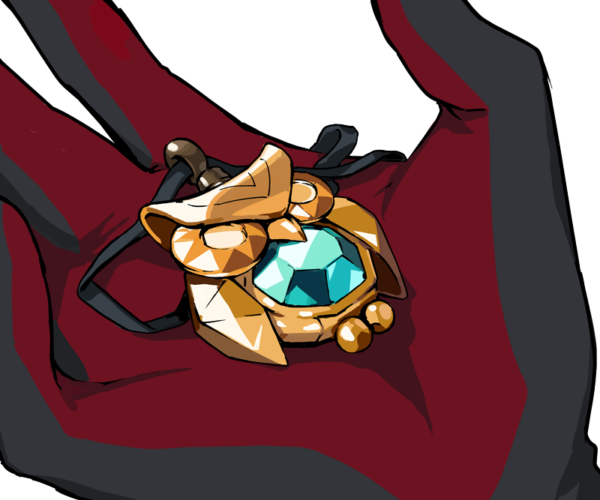 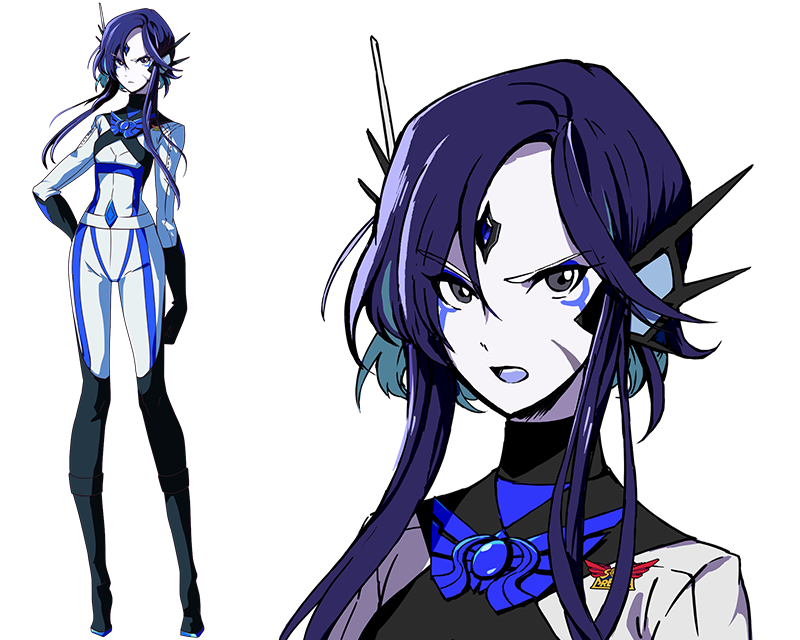 Luna Zarnitsyna Sheena/Female/Age 20 (CV: Kana Motomiya)
A cadet with Solar Recovery Army Sol Cresta.
Like Sho and Dril, she was caught up in the attack on the Amano-Iwato base, becoming the pilot of the Tsukuyomi, Yamato Unit 02, shortly thereafter. Her cool and aloof demeanor gives Luna the impression of being unapproachable, but underneath it hides a kind and gentle soul.

Luna is cool and mysterious!
She doesn’t speak and comes off as reserved, but she can actually be very animated. Crying, laughing, fuming, or disbelieving, the gap between her calm surface and stormy interior are part of her charm! 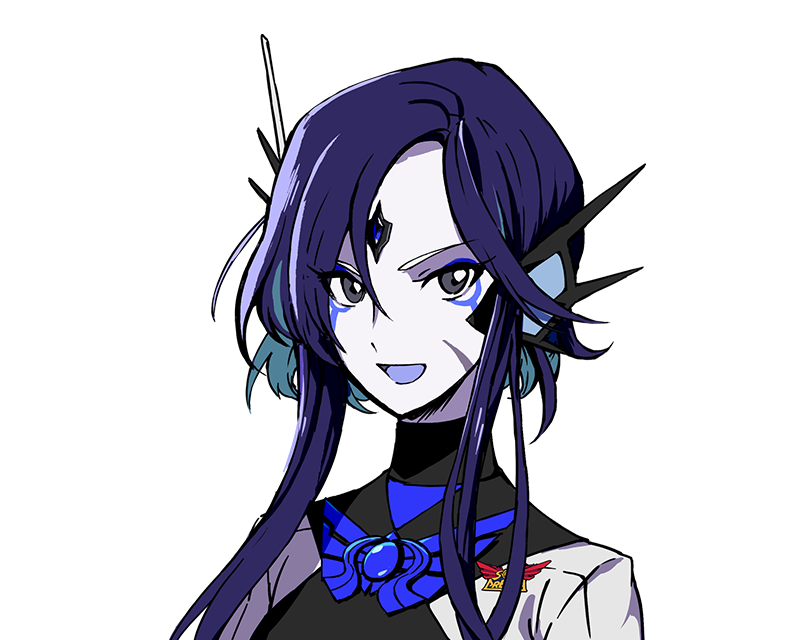 My image of a mysterious woman was very clear so deciding on the general design was a breeze, but it must have been difficult for the designer to come up with the “cool yet expressive” aspects. So please be sure to check out Luna’s wealth of expressions in game!

I think you can see that Luna’s aura is somewhat different from the rest of the cast. The truth is, although Luna and Sho are childhood friends who grew up in the same facility, neither he nor Dril know why she decided to become a pilot.

Just who is Luna really…?
Well, let’s allow Luna her secrets and move on… 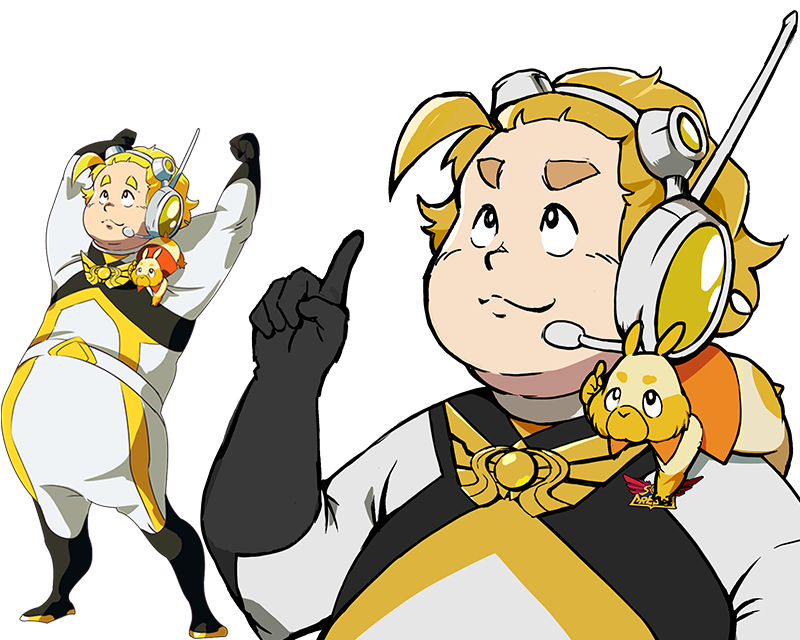 Dril Martin/Male/Age 14 (CV Ren Kato)
A technician and engineer with Solar Recovery Army Sol Cresta. Laid-back and carefree, Dril does everything at his own pace. Utterly incapable of reading a room, he has no qualms in offering nothing but his honest opinion. He rubs most people the wrong way, and honestly couldn’t care less. While he has no practical combat experience, various events result in his piloting the Susano, Yamato Unit 03, with nothing but his technical knowledge to rely on.

Dril is one of the more eccentric members of the team, a must-have in anything with combining machines! With his chubby form, “innocent” face and sharp tongue, he’s cute… because he’s not cute!

He’s usually teasing Sho or goofing off but perks up and takes over the conversation when machines come up, giving detailed explanations and showing his true colors as a scientist. Despite appearances, he’s quite the robo-romantic!

Although he really likes bananas, they don’t show up in the game. I’d like to think he’s stuffing his face with space bananas when not on the radio. Have to keep that brain fed! 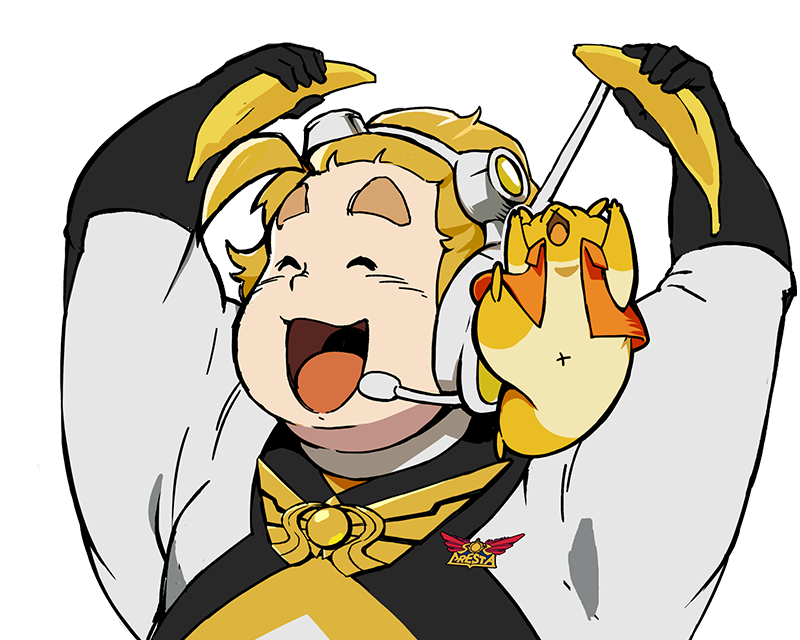 Originally Dril was envisioned as a slim, cynical mechanic, but that would have made all three main characters look similar and would have made a poor balance, so after a series of twists and turns we landed on the current round and cute design. Considering his unique proportions, we took a lot of care with balancing him out.

By the way, Hamco the space hamster that rides on Dril’s shoulder strikes a variety of poses throughout, so look carefully when you have a chance. 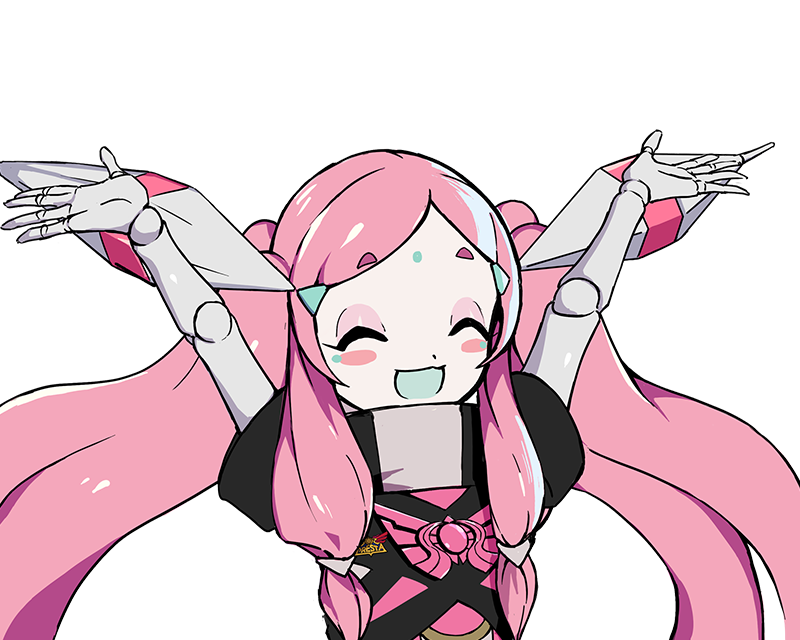 Reichi Cosmea/Female Android/Age 2 (CV: Shiori Kurosaki)
An operator for Solar Recovery Army Sol Cresta who is also an android designed by Dril Martin. While her sensor and radar functions allow her to spot enemies with alarming speed, she lacks the ability to analyze complex data. However, when paired with her sister Reini, their combined processing power makes them nigh unstoppable 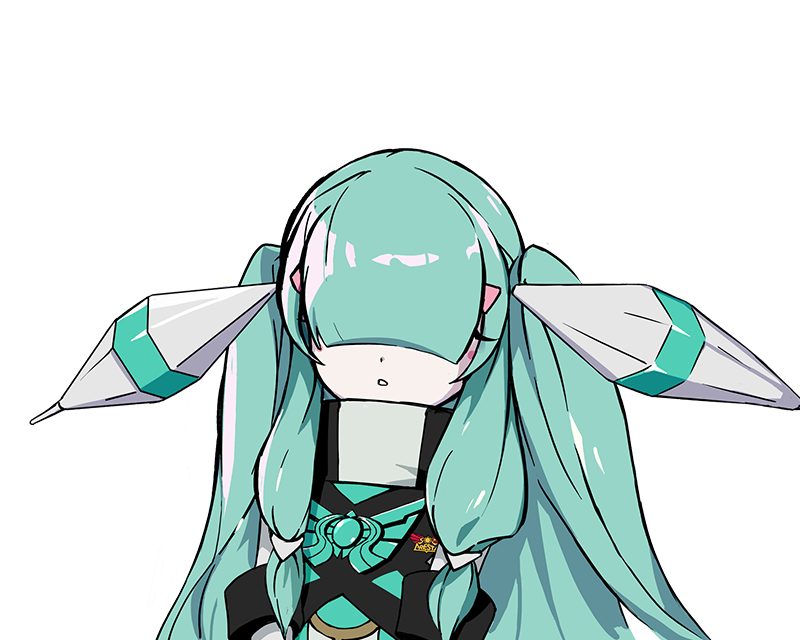 Reini Cosmea/Female Android/Age 2 (CV: Shiori Kurosaki)
An operator for Solar Recovery Army Sol Cresta who is also an android designed by Dril Martin. While her detection functions are a step behind Reichi’s, her data analysis skills are second to none. When the two sisters are working together, their operational powers reach positively dizzying heights.

Although they’re both operators Reichi is endlessly upbeat while Reini is calm and collected.

Although their task is delivering accurate, immediate data about the surrounding area, they also make it their job to keep the three Yamato pilots feeling safe at all times—Reichi by being positive and a mood-maker no matter what, and Reini by handling everything without the slightest hint of trouble.

Although they don’t always manage to pull that off…

Reichi and Reini’s designs include a lot of my own preferences.
While trying to think of characters that would stand out just as much as our 3 pilots, I added “twins”, “androids”, “hair over eyes” etc., and they kept changing. In game it’s revealed that Dril made them, so it seems like our preferences align, maybe just by coincidence… 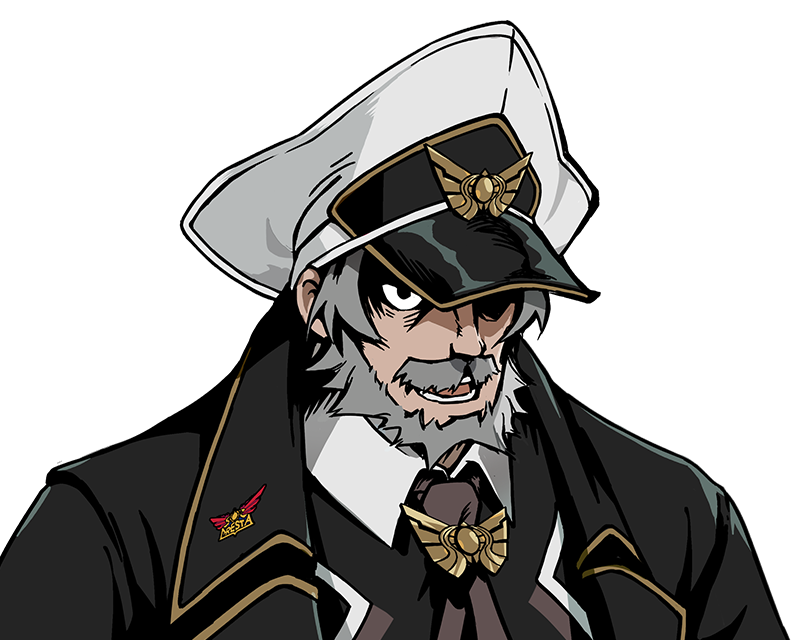 Go Kurogane/Male/Age 50 (CV: Masanori Machida)
The commander of Solar Recovery Army Sol Cresta and captain of the attack carrier Yatagarasu, Go is a true veteran in the field. Taciturn and level-headed, his ability to make quick decisions in any emergency has earned him tremendous trust from his crew, but the fiery spirit that fueled his days fighting on the front lines still burns bright within.

Go is the level-headed, reliable elder statesman of few words.
He gives off the air of “captain”, but you can see the steely glint in his eyes that hints at his righteous anger and battle-readiness inside.

Go was himself once a pilot and fought in the previous war against the invaders.
The spirit that moved him as a young pilot still glows hotly even as a commanding officer.

For his design, we went with a fairly straightforward “captain-like” design. Making him a bit older or more relaxed looking may have enhanced that but considering that he himself used to be a pilot, we gave him a more aggressive and powerful atmosphere. 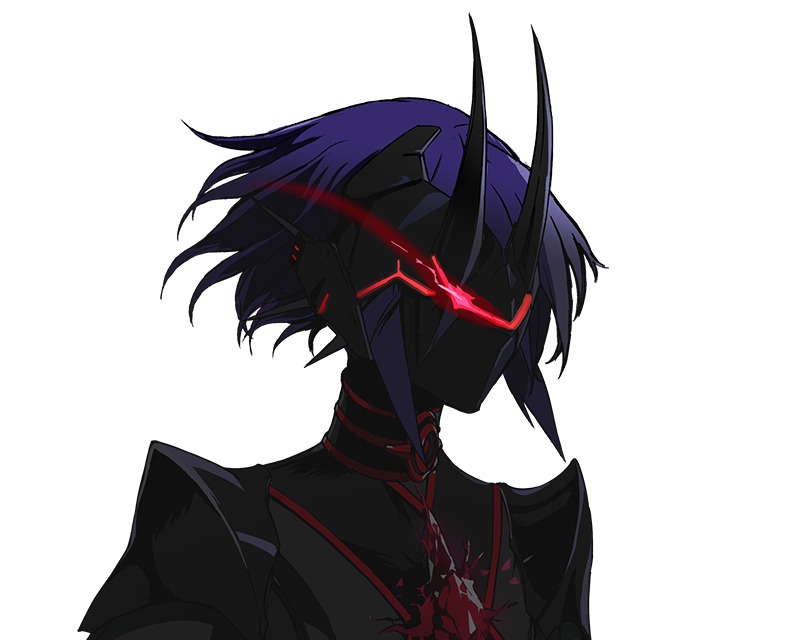 You can see this mysterious character in the upper right area of the key visual.
I wonder who he could be…

So what did you think?
There’s another mysterious enemy that I’d like to introduce (voiced by Mana Hirata), but we’ll stop here for now. You’ll have to play the game for yourself to see the rest!

See you next time!