It seems that the Bayonetta blog is finally underway! Lots of the staff from Bayonetta are going to take turns writing here, so I hope you all enjoy it.

Today is my turn, and for my first post, I thought I would give you some insight into the concept design for Bayonetta.

Truth be told, it was a real struggle to arrive at the final design for Bayonetta herself. In fact, it took a full year! I think what happened during that year is quite interesting, but it is quite a long story, so I’ll save it for another time.

When we started Bayonetta, our director, Hideki Kamiya, asked me to design a character with three traits:
1)    A Female Lead
2)    A Modern Witch
3)    She Uses Four Guns

Designers use these keywords to fuel their imagination as they draw, and after exhausting a few ideas, I arrived at the prototype design below. 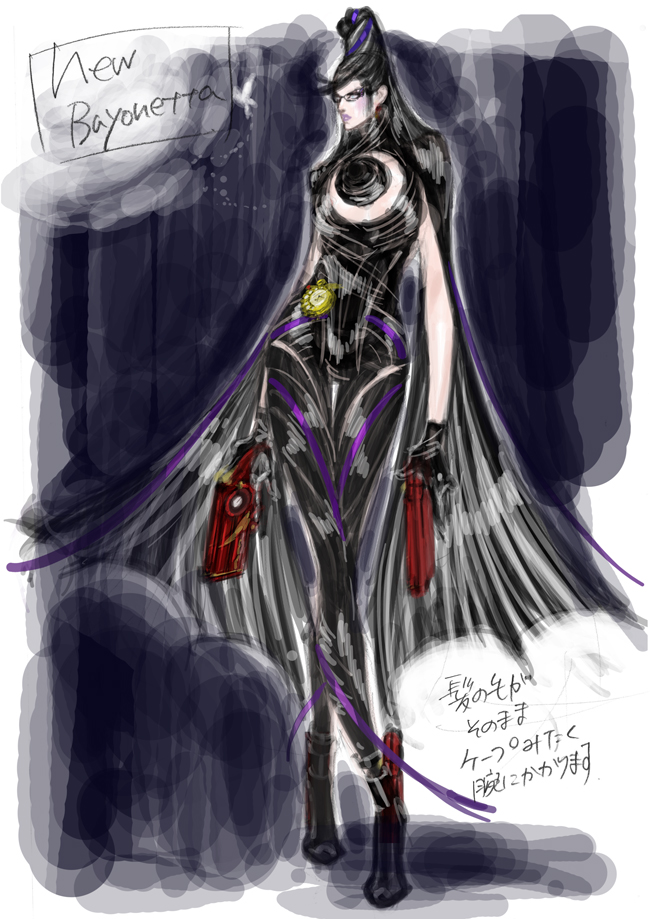 Since Bayonetta is a witch, her “theme color” had to be black! The other special part of her design is the long hair wrapping around her body. The hair gathered around Bayonetta’s sleeves accentuates the movements of her limbs.

When a female character appears in an action game, her limbs often seem thin and short. That is why I tried to make her more appealing as an action game character by adjusting her proportions and extending her limbs.

Then I went about finishing up her clothing, which you can see below! 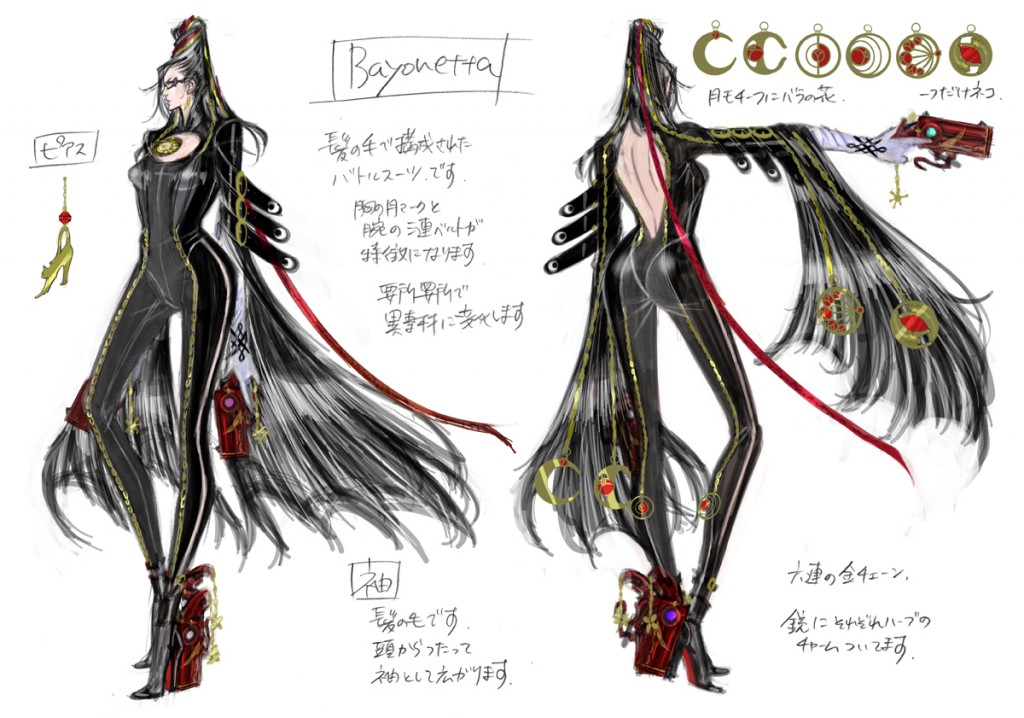 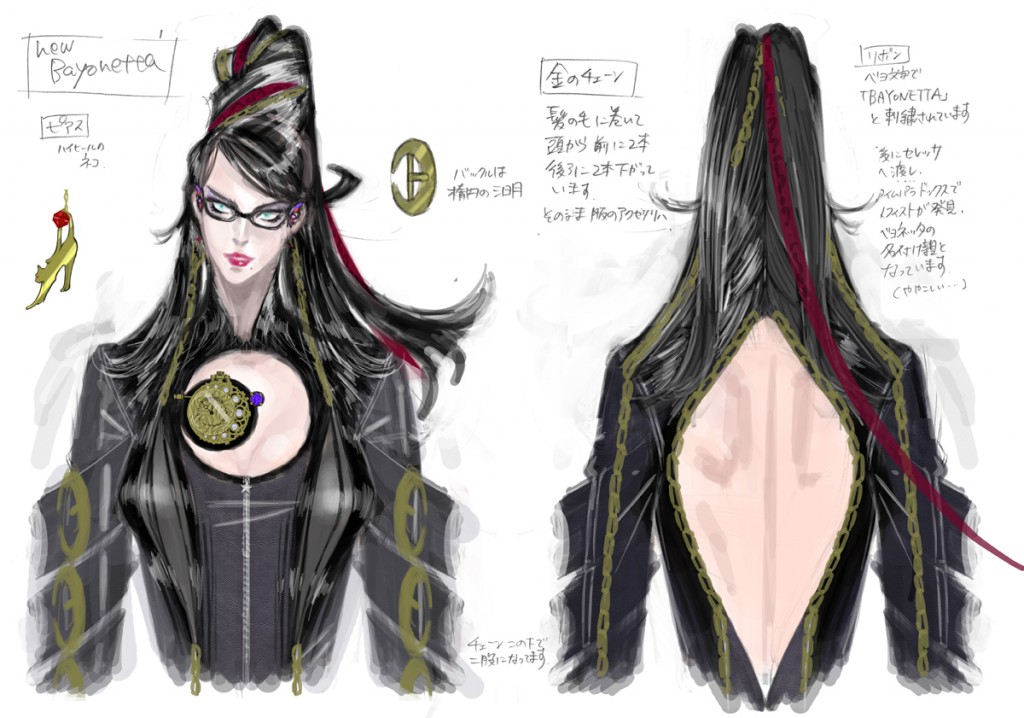 This is the final design. :-p

Bayonetta’s long hair is the source of her power, and she normally wears it around her body as a means of adornment and protection. However, once she enters battle, she can use her hair to summon incredibly powerful demons from hell. When she summons these Infernal Demons, she is using all of her power, so she has no time to control the hair wrapped around her body and thus she ends up in more “comfortable” attire. The exciting way she looks in this state is one of the parts of Bayonetta that I love.

By the way, Bayonetta’s beehive was a hairdo that I really wanted to give her, and I insisted on drawing her that way throughout the design process. As she is a witch, I thought that instead of a pointy hat, I would give her something elegant, like a wrap-do… Apparently though, Kamiya-san didn’t really care either way. :-p 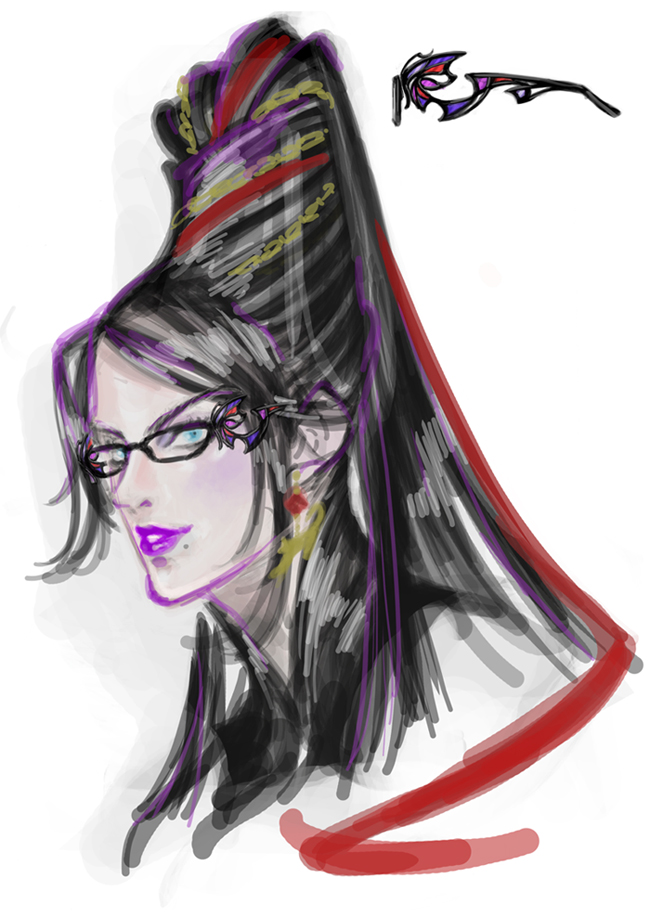 Glasses! This was something that Kamiya-san really pushed for, as he was aiming to differentiate Bayonetta from other female characters and give her a sense of mystery and intelligence. Of course, I think it is just because he likes girls with glasses.

Conceptually, we were also looking to make Bayonetta “fashionable,” and I designed her so that this sense of fashion came through in all the little details, not just the glasses.

That is the story behind Bayonetta’s final design. I think I was able to put my feelings into her design, and she ended up a strong female character. So, you’d like to know how she behaves? Or maybe you are wondering what kind of battles will she get herself into? Look forward to playing the final version of Bayonetta and finding out all the answers!