I was wondering if you had heard about the Rodin’s Selection soundtrack you get with Bayonetta? What you didn’t know, and I am here to tell you about, is the strange set of circumstances that occurred as we set off to produce this bonus item.

Years ago… There was a phone. In front of me. 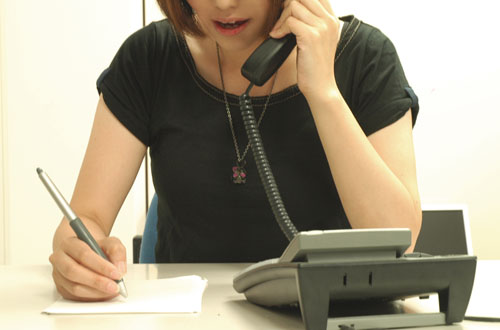 RODIN
Hey. Ikumi. I’ve got a job for you.

IKUMI
Huh? Who is this!? No solicitors!!

RODIN
I’m a bartender… In a wretched hive of
scum and villainy. I heard you got some
skills, and I want you to design my menu.
You gotta make it… Dangerous. And Hot.

And then phone call ended.

A few days later, I found myself in one of America’s grimiest cities. Searching around, I found a witch’s seal on the floor in front of me. I stood on it, then collapsed, as it felt as though my entire body was being dragged away.

That is when I realized where I was… 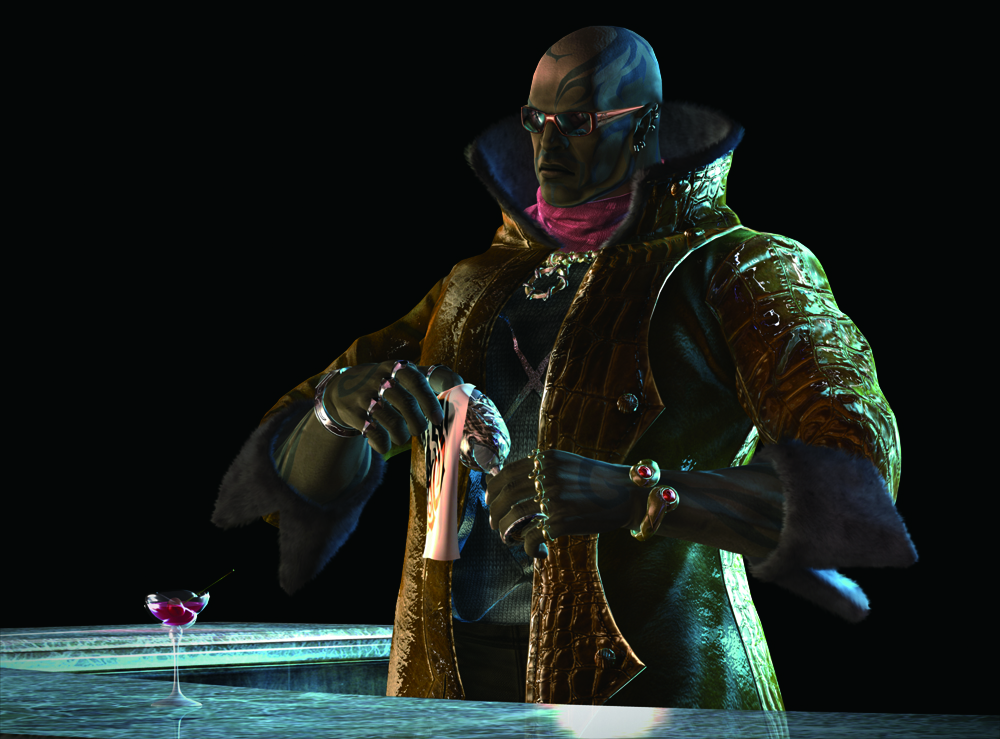 IKUMI
Well, you said I had a job to do.
I thought to myself, “Even though this guy is
bald as the night as long, he’s got a real
presence about him. Kinda like Kamiya-san….”

RODIN
I can hear people’s thoughts, and I sure
as hell heard that. Now did you take care
of that work I told you about?

IKUMI
Yep. Here is your menu. 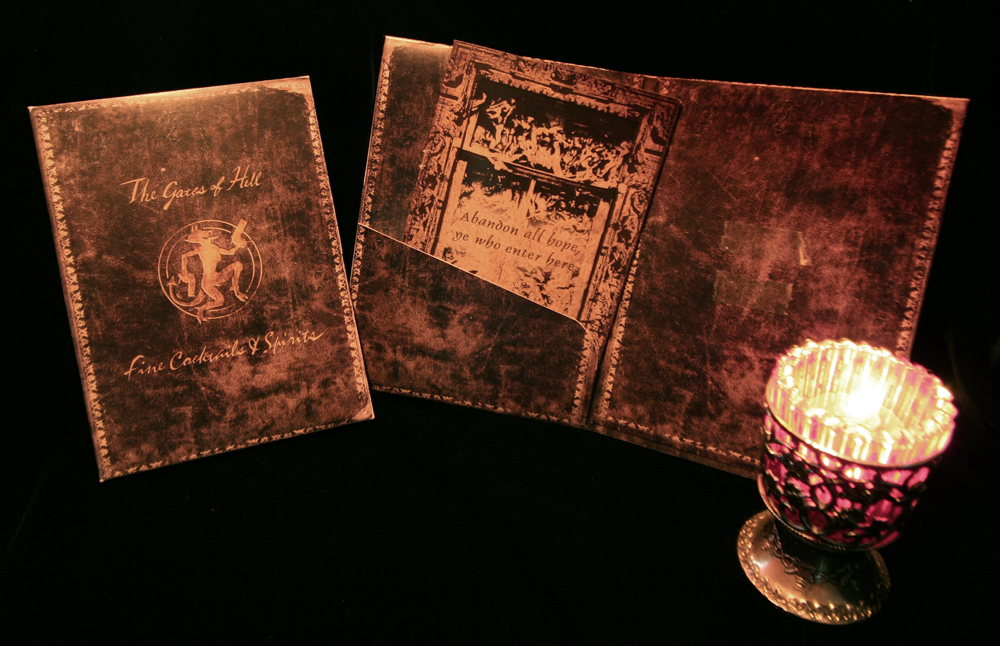 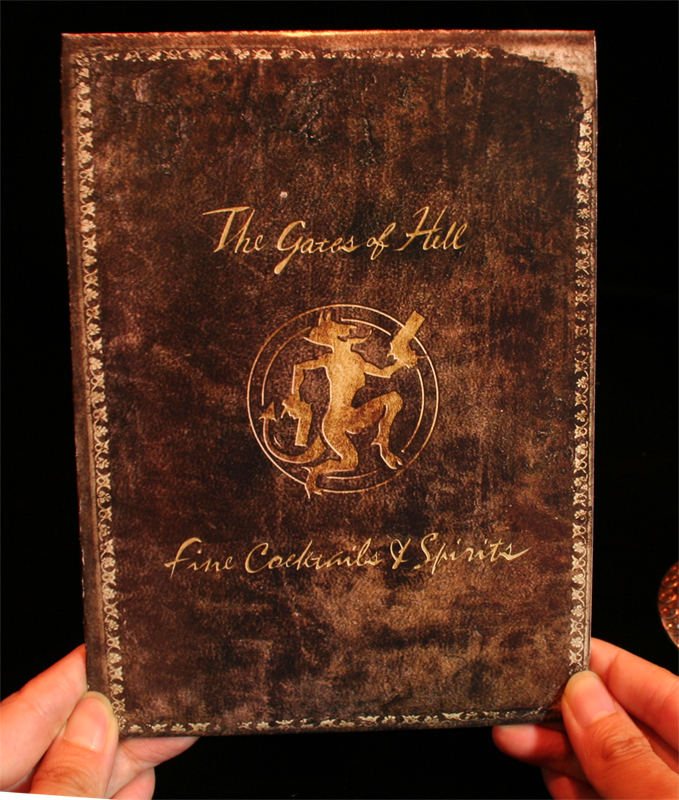 IKUMI
Let’s start with the menu… I heard you
like leather, so I made the menu seem like
it is distressed leather. Also, I made the bar’s
logo seem as it was embossed on. It looks old
and worn so that it would link up with the
ambiance of your place. I also added the text
you asked for –
The Gates of Hell, Fine Cocktails and Spirits. 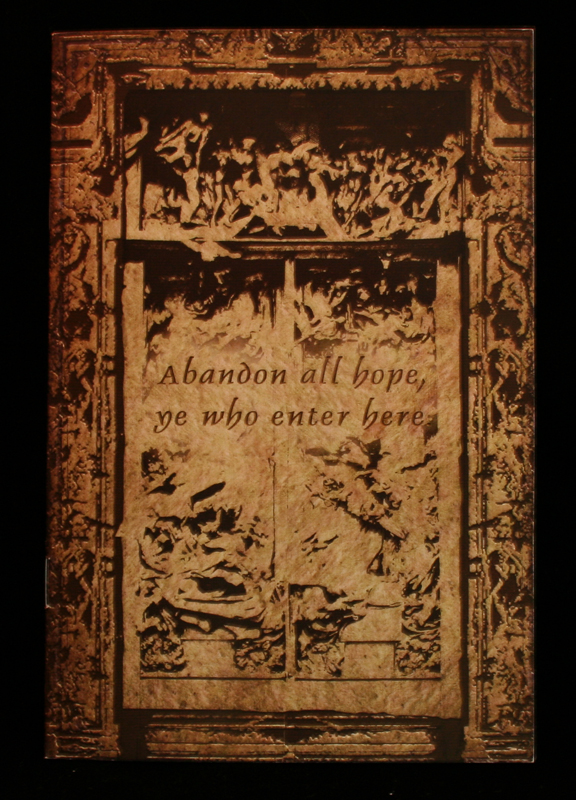 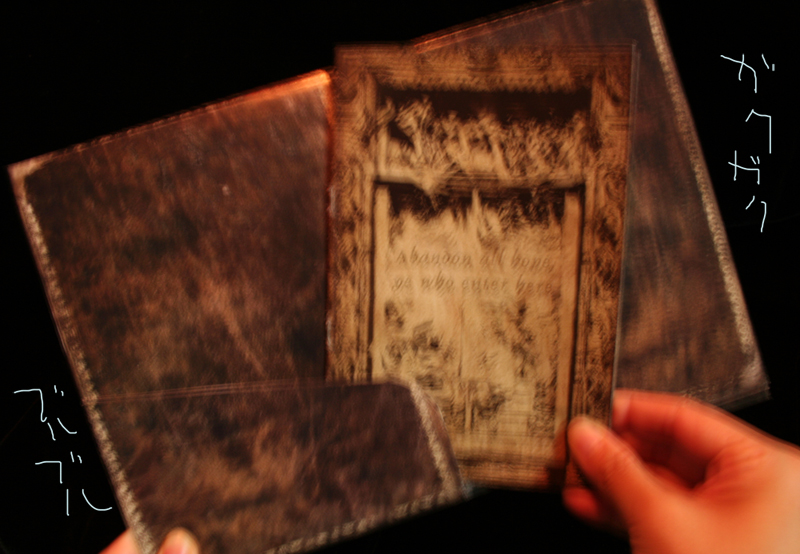 ※ The picture isn’t blurry. I was just incredibly scared to hold the menu so my hand was shaking!

IKUMI
On the inside of the menu, we have a booklet
that has the actual Gates of Hell on the cover,
since I heard you often find your way down to
hell. I also added “Abandon all hope, ye who enter
here,” so everyone who opens the menu will know
take pause in what they are getting themselves into.
I think that fits what you are trying to do here
perfectly. I put your address and such on the back
of the booklet.

RODIN
What about the inside of this bad boy?

IKUMI
I was too scared to open it… Being, you know,
a mere mortal. Why don’t you take a look? 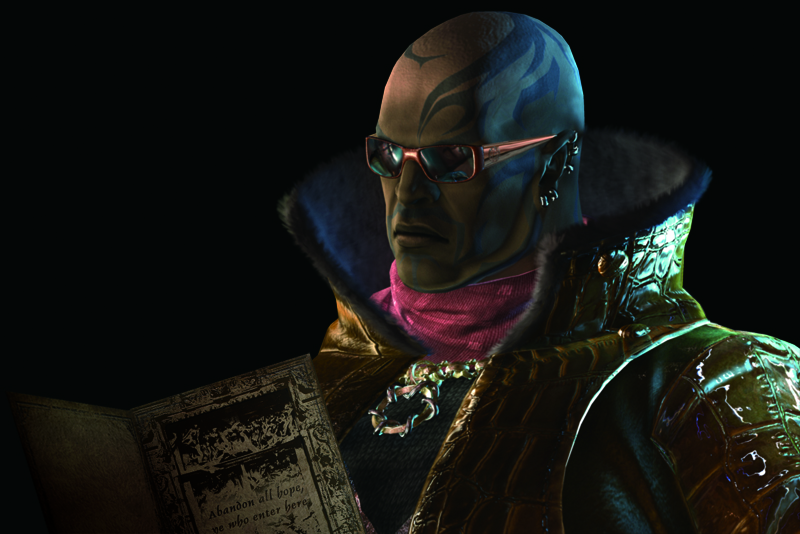 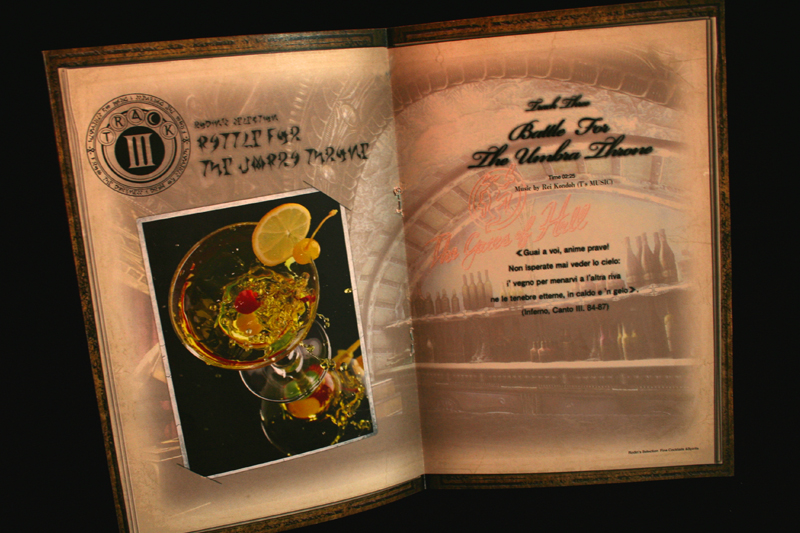 With that, our business dealings ended.

A few years passed, until just a couple of days ago I had a talk with Kamiya-san. 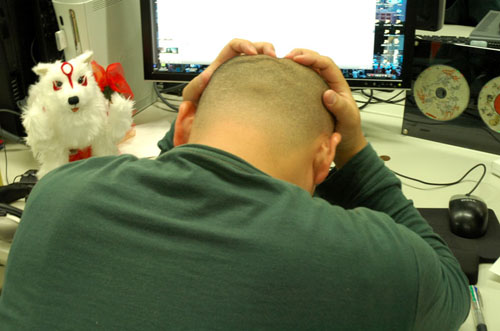 HIDEKI KAMIYA
What am I going to do for the pre-order gift… Hmm…
If we do a soundtrack, what should we do for the design…

Watching Kamiya-san’s glow brighter and brighter as he searched for an idea, I remembered something I had worked on a few years ago and decided to make a phone call.

IKUMI
Rodin!! I’ve got something urgent we need to talk about.
We want to use the menu I made for your bar as the
pre-order bonus for Bayonetta.

RODIN
Oh. Ikumi. Yeah, baby, that’s fine. I’ll break off
some spares I got lying around. By the way, I still
haven’t paid you for that design work, so we’ll call
it even.

IKUMI
Umm… OK. Kinda surprised that went
so well, but it all sounds good to me.
Thanks.

RODIN
When you get things wrapped up, make sure you
show me some love and send one this way. 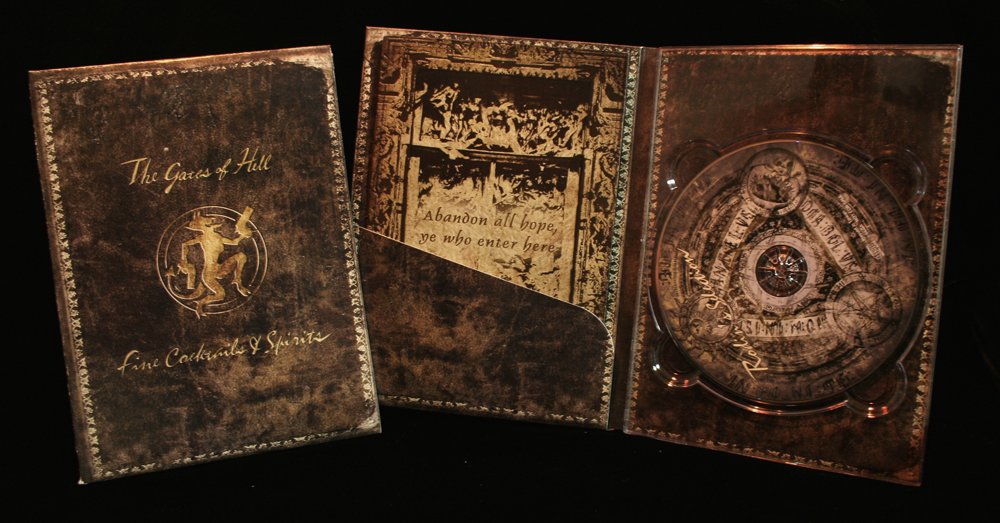 So here is the final “The Gates of Hell” menu. We took one of the actual menus used at the shop and then housed in a special jacket that also holds the Rodin’s Selection CD. 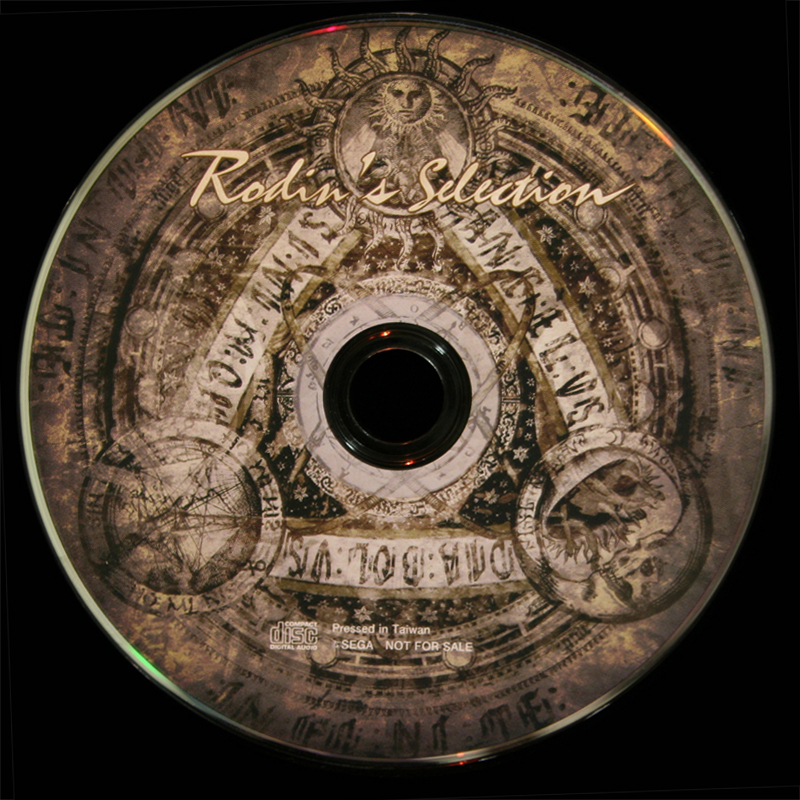 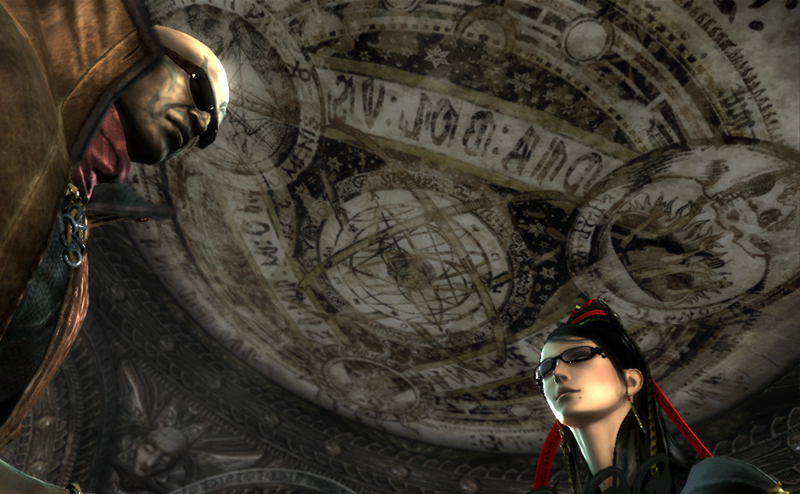 ※ Bayonetta and Rodin engaged in some sort of conversation. On the ceiling is the “Trinity of Realities” depicting the human world, Inferno, and Paradiso.

For the CD label, we used the painting of the Trinity of Realities, depicting the human world, Inferno, and Paradiso, found on the ceiling in The Gates of Hell. The CD contains tracks from Bayonetta selected by Rodin himself, and mastered especially for this CD. So I suggest you prepare yourselves emotionally before taking a listen.

So there you have it. Bayonetta’s Japanese pre-order bonus, Rodin’s Selection. It was only available for those who pre-ordered in Japan, and only in limited numbers, so I hope you got your hands on it!

UPDATE: We’ve heard all the fans overseas who wanted to get their hands on Rodin’s special selection of tracks from the Bayonetta soundtrack! Now you can! While the jacket design is different, you can pick up the Rodin’s Selection disc as a part of the Bayonetta ∞ Climax Edition! Check with your local retailer for information on how you can get your hands on the ∞ Climax Edition! (Note: The Bayonetta ∞ Climax Edition is currently announced for UK, France, Spain, and Australian release). A replica Scarborough Fair gun is also available in most European territories when you pre-order the game! 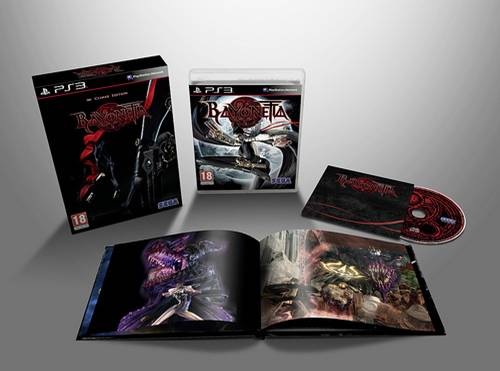 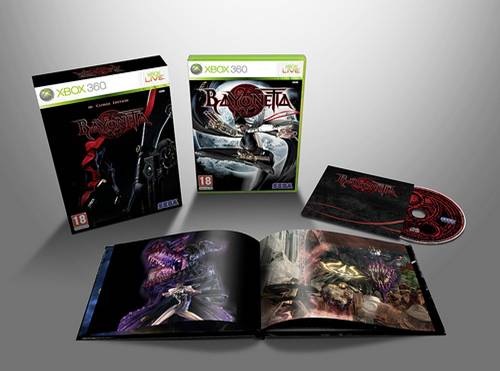