Hello all! I’m Ikumi Nakamura, concept designer on Bayonetta. It has been three weeks since Bayonetta was released in Japan… I bet there are many of you who have completed the game, and one of the things I’ve seen quite a bit of are comments referring to Bayonetta as “middle aged.” (LOL) Considering she is a witch who has been living for hundreds and hundreds of years, I think she has transcended middle age; however, these days I’m just happy that it seems people are into an attractive older woman like Bayonetta.

For this entry, I thought I’d bring you up to speed on some of the prop design in the game. First of all, in Bayonetta, there are certain treasure boxes that can show up at certain points in the game. However, one of Kamiya-san’s hallmarks is to make these treasure boxes engaging by giving them a sense of a bit more backstory and relevance… I think. 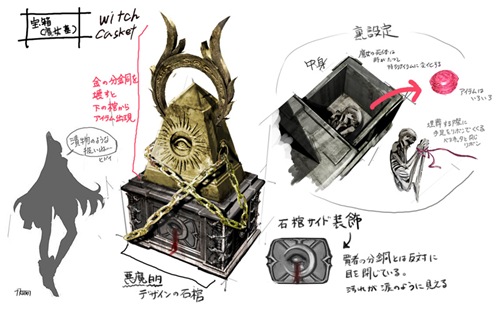 This treasure box was designed to actually have been a witch’s grave, but as they were persecuted by the Sages, the Sages placed a blessed counterweight on top of the grave to seal them. Over time, the remains of the witch inside actually became an item. By destroying the counterweight, Bayonetta is able to release the soul of witch within, and gain her strength in the form of the item. Pretty engaging, huh?

These small items get destroyed immediately, or are only on screen for a split-second, but they are still satisfying to design, and I get excited designing them. 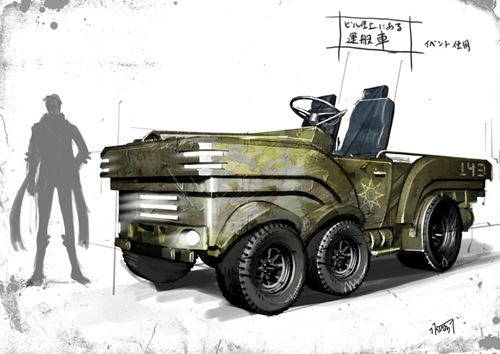 This troop transport shows up in one of the cutscenes where Luka gets the scare of his life. It’s kind of a bold design, and I really like it, but I think it is only on screen for like less than 10 seconds. I also remember another part of the world that I was really particular about – the chapter start screen. 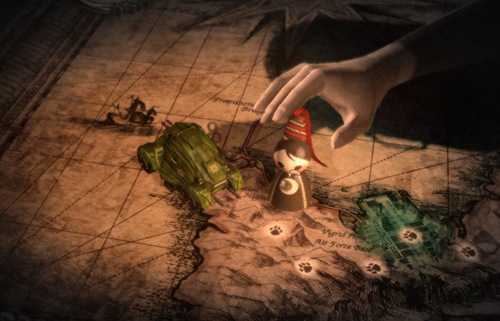 The idea here is that it is a certain child’s room, and the kid is playing with a board-game-piece-like Bayonetta doll on top of a map. As you clear each chapter, objects appear on the map. These are based on the same models that actually appear in the stages, but one of our cute, bespectacled background designers, Sata, turned the models into toys for me, so when they show up on the map, they have a really good feel to them. So the question then remains, whose hand is it playing with these toys!? 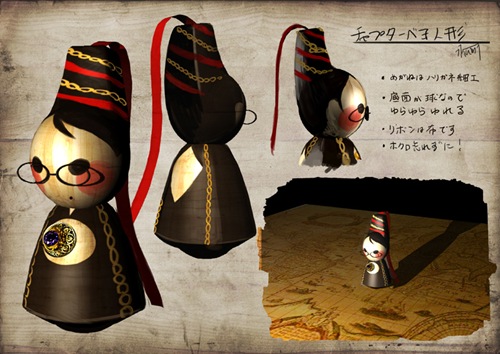 This is a “tumbler doll” designed to look like Bayonetta.

I really hope they make it into a real toy…

I think that, starting with the design of the map and extending to things like the background on the menus, designing with “old cartooon” style gives the World of Bayonetta an extra bit of depth. When I made these designs, it was towards the end of development and I didn’t really have much time, so I combined the various parts that I would busily draw by hand together in Photoshop. I also drew Rodin’s Trinity of Realities in the same manner. 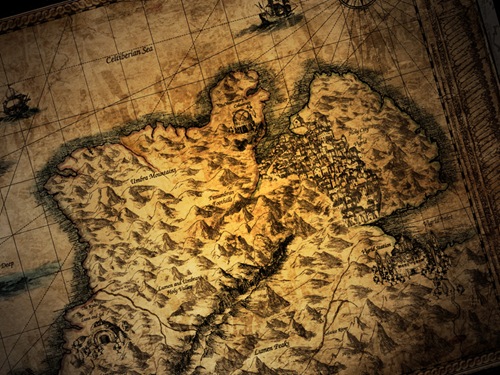 I think that I removed the nipples in the one that actually appears in the game. One of the big wigs here told me to lose the nipples.

The whole sad affair came to be known as the “Nipple Rebellion.”

This about wraps it up, but there is still more Bayonetta news to report soon. There is some Bayonetta content for Xbox Live, wallpapers, and a comprehensive art book, etc. on their way to Japan that we are working hard on, so look forward to more news soon.

Now to answer a few questions that came in for me:

Is there a sexy, cute angel like the one in the ‘Team Little Angels’ logo within the game itself?

That would be Joy’s role in the game, wouldn’t it? Hehe.

When I saw the designs for the Moon of Mahaa-Kalaa, it was so cool I just couldn’t get enough.

When I see a gas mask, a balaclava, or an RPG-7, they are so cool I can’t get enough.

There is a SWAT team in Bayonetta? LOL

They aren’t a SWAT team, but there are Ithavoll military forces in the game.

Is there any way I can get that Little Angels T-Shirt?

If you can use a time machine back to San Diego Comic Con 2009 you should be able to get your hands on one.

Well, that it for now! Until next time!