During development, I started to imagine how my daily surroundings would look after being sliced up a bit. Which is worrisome, I know… My name’s Masaki Yoritomi (call me Tomi), I’m in charge of character modeling.

For this entry I’d like to talk about Rising’s most original feature: characters that you can dismember part by part, limb by limb.

Those of you who’ve played the demo I’m sure already know this, but Raiden’s sword can be freely manipulated to cut up almost everything in almost any thinkable way possible. When you cut something in two, however, two new surfaces form from the area you sliced. This means, we have to provide possible surfaces for any kind of cut. For example, take this watermelon here… 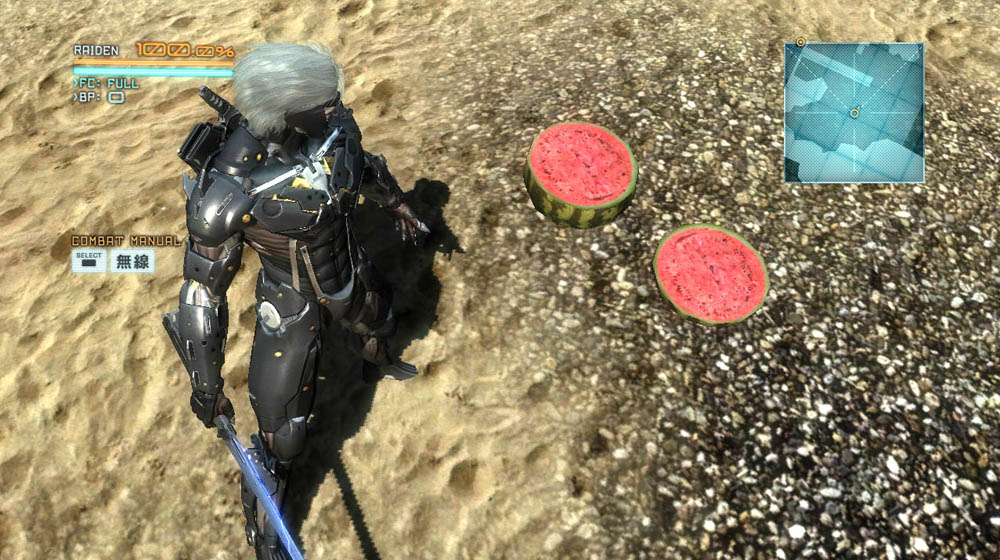 Slash! One slice and we get to see the typical insides of a watermelon.

But adjust the settings a tad and… 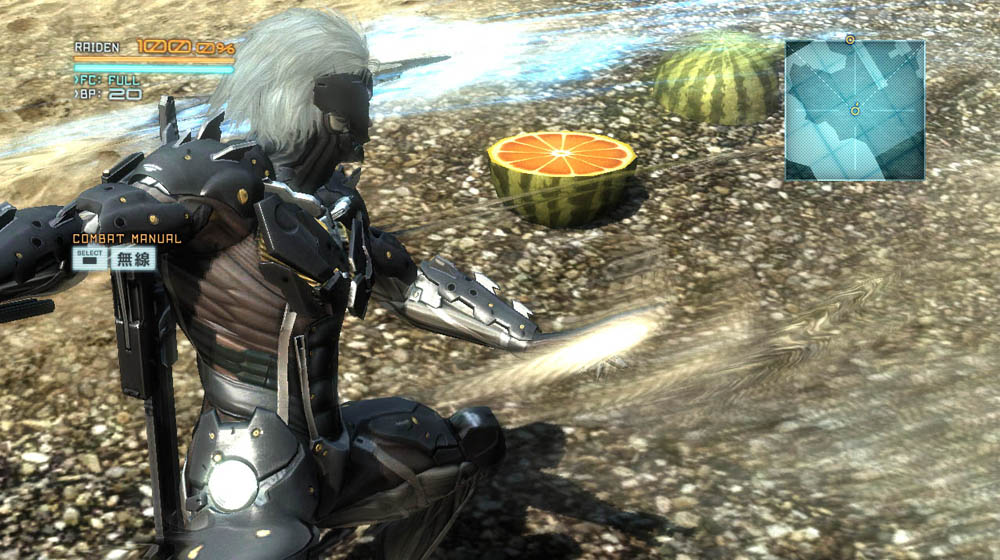 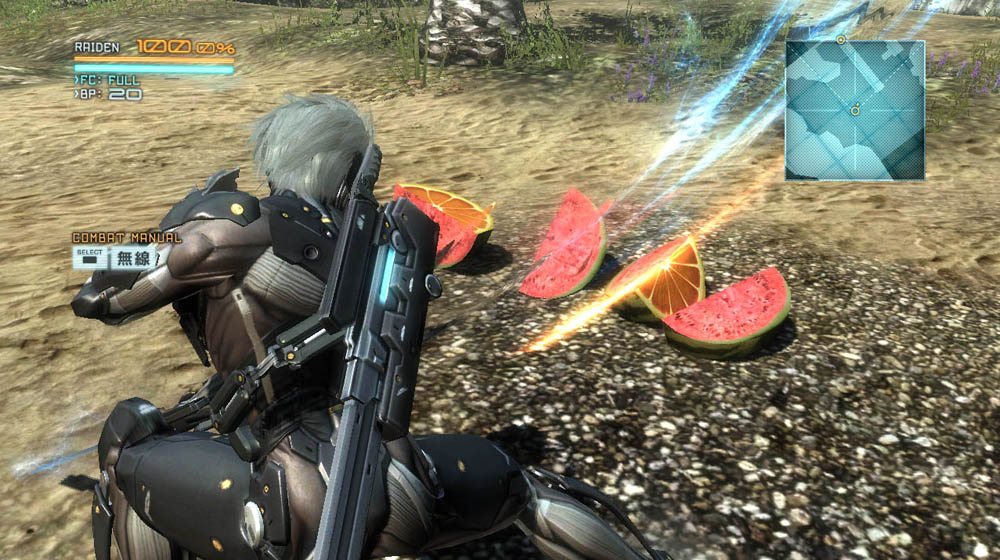 Slash! Ummmm…? What the…

By changing a few figures, we can switch the surface to anything we want. In the example above, the formula for horizontal cuts give us an orange and vertical cuts give us a watermelon. These kinds of settings normally wouldn’t be necessary for a watermelon, as it is a sphere where the insides look the same no matter what angle you cut it from. Enemy characters, on the other hand, are a different story. Take a look at the following pictures and see if you can guess the enemy? 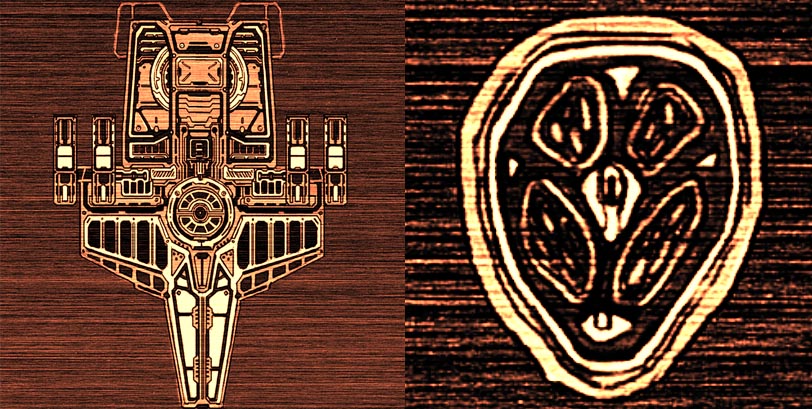 Here is your answer: 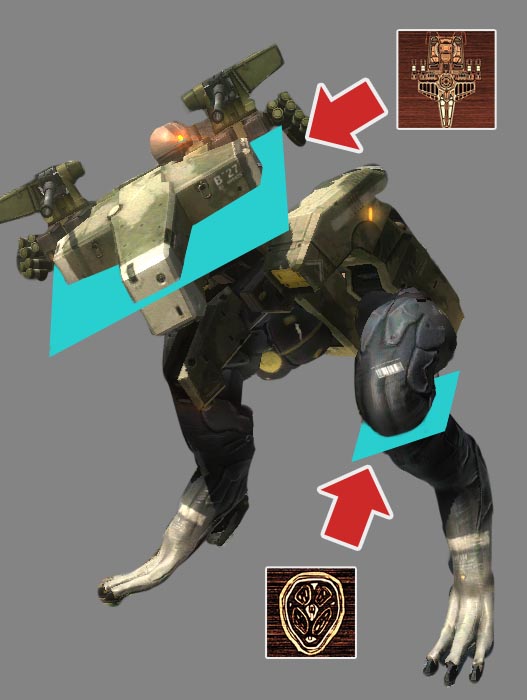 When we start dealing with mechs and cyborgs, we need to prepare different surfaces for each part of the body. If we cut the head, we need to get something that looks like a cutaway of the head. We also need to do the same with the arms, the legs, the hands… And you need to prepare different surfaces for different angles of cuts as well! The insides should look different depending on whether you cut vertically, horizontally, sideways, and so on.

Can you just imagine how many possibilities do we have to make?!

Eventually, we realized we’d have to not only design what characters looked like from the outside, but from the inside as well. We’d spend late nights discussing things like “How should this guy should look like this from this angle?” and “There should be a bone here, right?” 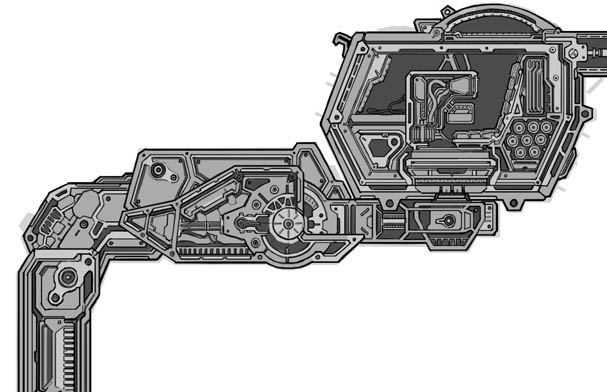 “Umm… this should be like this here. These parts here should go here…”

Playing the game normally, a lot of these surfaces would be hard to notice, but we were rather particular on how each detail was designed. But now that Metal Gear Rising’s release is getting so close that you could do a countdown by seconds, be sure to check out the enemies’ insides when you play the game, too! 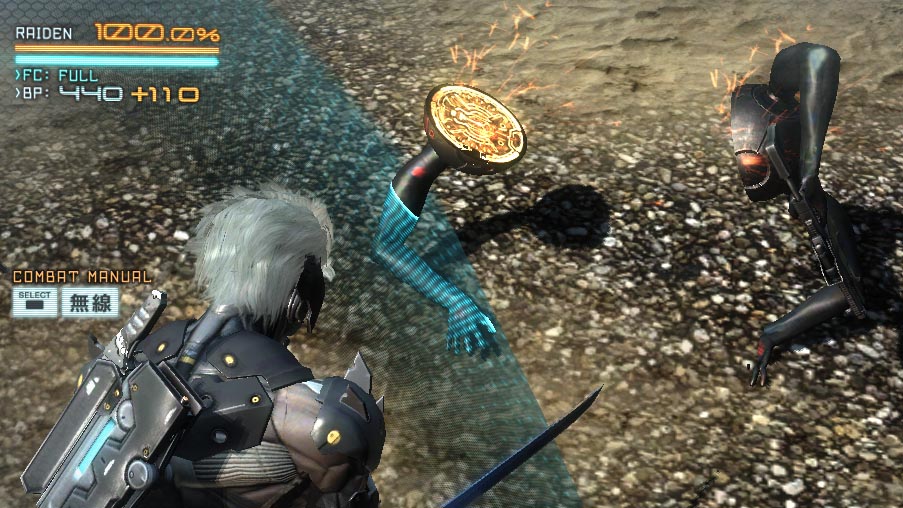