The story so far:
The Wonderful 100. A group of transforming heroes from all ends of the Earth assembled to fight against a mysterious race of alien invaders.
Powerless to face their invaders alone, the only hope they would have to repel this evil threat to humanity is through the powers of their entire 100 unit team combined. And the name of this unique multi-hero skill? The Unite Morph!

With their minds and bodies connected, our team of 100 heroes are able to use a powerful skill: The Unite Morph. But these 100 heroes aren’t clones or robots made in a factory. Each comes from their own region on Earth where they have protected the peace all by themselves. Having worked mostly alone, they might not actually be as used to teamwork as you would expect.

Some of these heroes may be more on the flexible side, but when you’re on a mission to save the entire Earth, every decision you make could mean life or death. Try to gather a consensus on the battlefield and you won’t last very long. What I’m trying to say is, each of our 100-hero team has some trouble following instructions.

So just how are we supposed to entrust the Earth to this mismatched, scattered group? We need someone to tie things together!

And we have that someone. The leader for The Wonderful 100, a rookie who finished training last year and is about to get his first real experience in combat.

Let’s bring him out.

The young leader of the Wonderful 100. Having just joined the Wonderful Ones after finishing a year of comprehensive training, Earth Defense War III is his first experience in combat.

Though technically still a rookie, he is extremely gifted, achieving a record score in both the written and field sections of the CENTINEL tactical examinations.

Brimming with passion for justice, he takes a firm stance against those who threaten peace, but his by-the-books attitude and serious personality can occasionally rub people the wrong way.

Sometimes Red’s seriousness crosses the realm of reason, and those around him find getting through to him almost impossible. The opposite is rarer, though, as Red has an incredible memory, and never forgets something after being told.

His deep-crimson CENTINEL-Suit boasts balance in all levels of performance, demonstrating diverse aptitude in any mission. The Vulcan Knuckles equipped to both his arms are capable of intense blows and machine-like accuracy, which can be even further increased in power via the “Unite Hand” Unite Morph technique.

Red truly believes the children are our future, so he has taken on the guise of a Blossom City Elementary School teacher in his everyday life, teaching them well so they can lead the way. 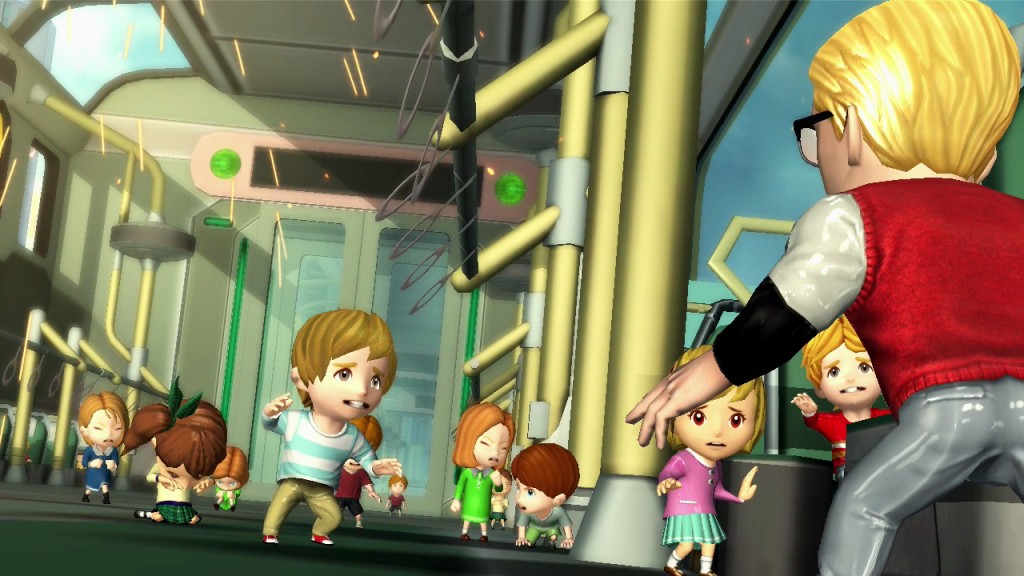 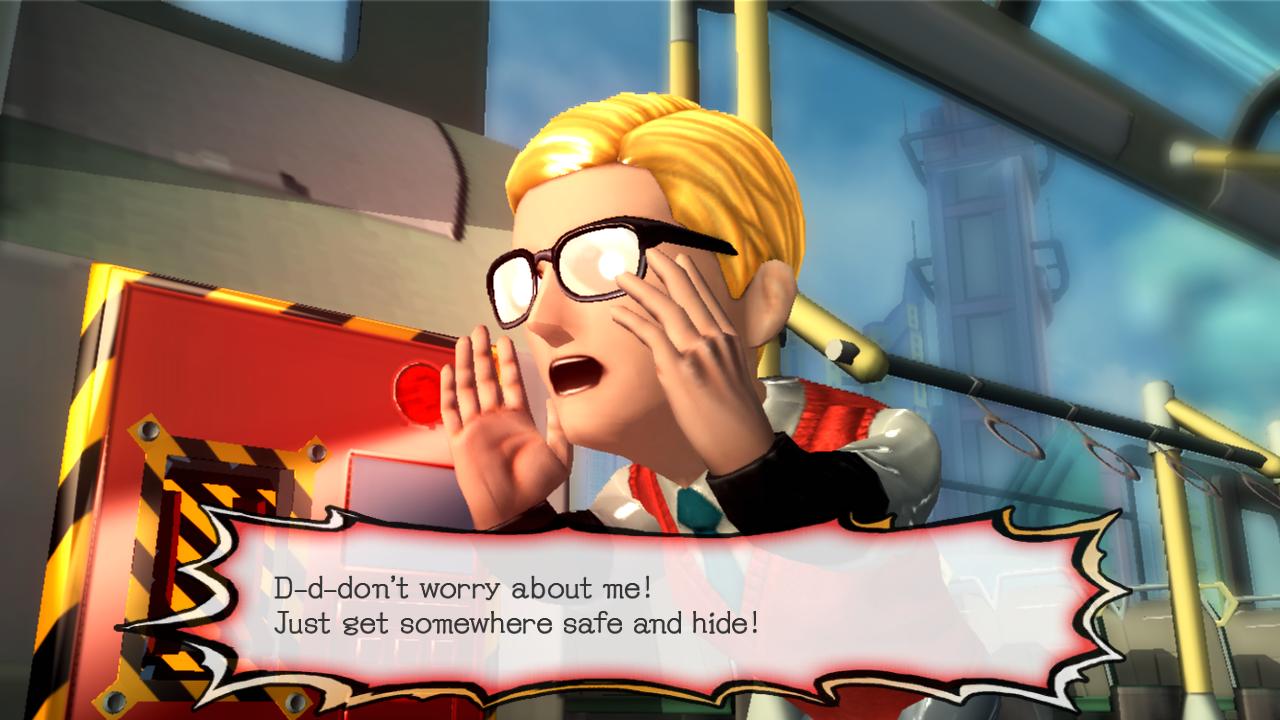 So. Red’s a teacher? Guess that explains why he’s so serious to a fault all the time. He’s out there protecting and guiding his students even when the world isn’t at stake. This is what probably made him a good fit for the leader position.

Still, being new to the superhero game, there might be a few more senior members who have some trouble taking orders from a newbie. 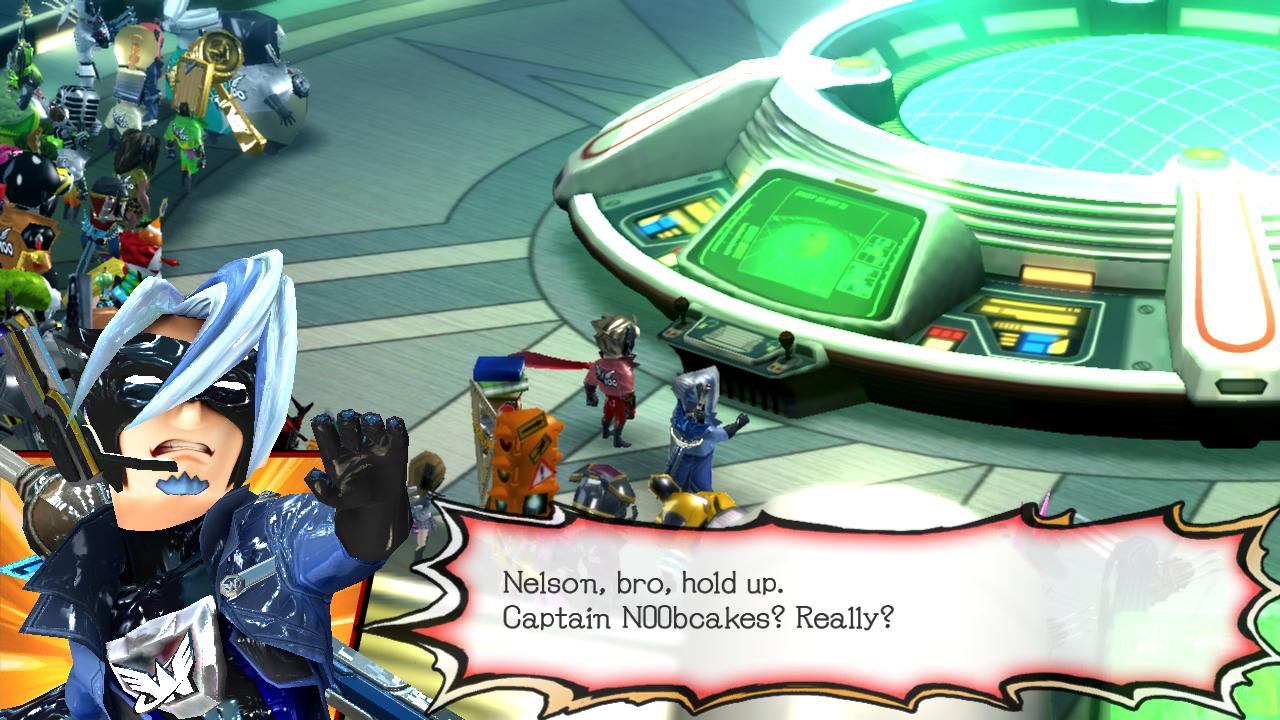 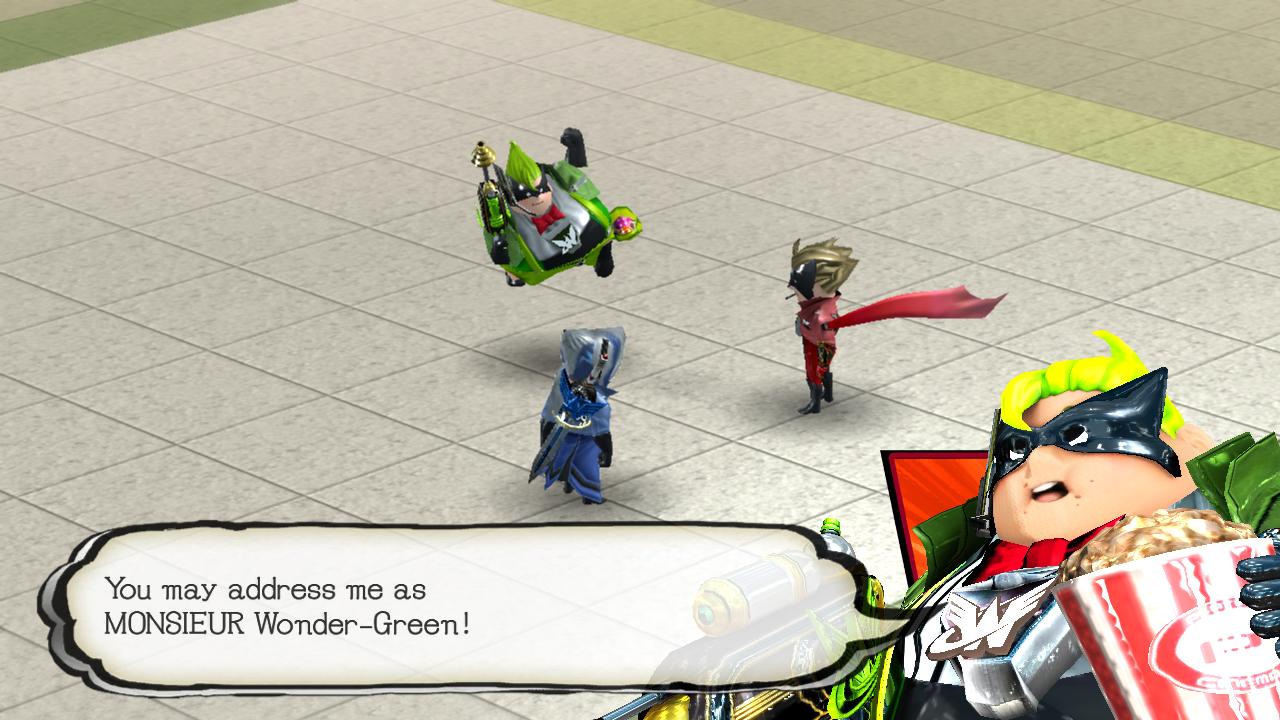 Nobody said leading this ragtag bunch of heroes was going to be easy.

Then there’s this subtitle he has. “The Crimson Fist.”
If you watch how his Vulcan Knuckles almost blaze with each punch, it’ll probably make sense where the title comes from. And with Red’s ability to think fast in a pinch, his multi-purpose Unite Hand seems like the perfect choice to help out the team. 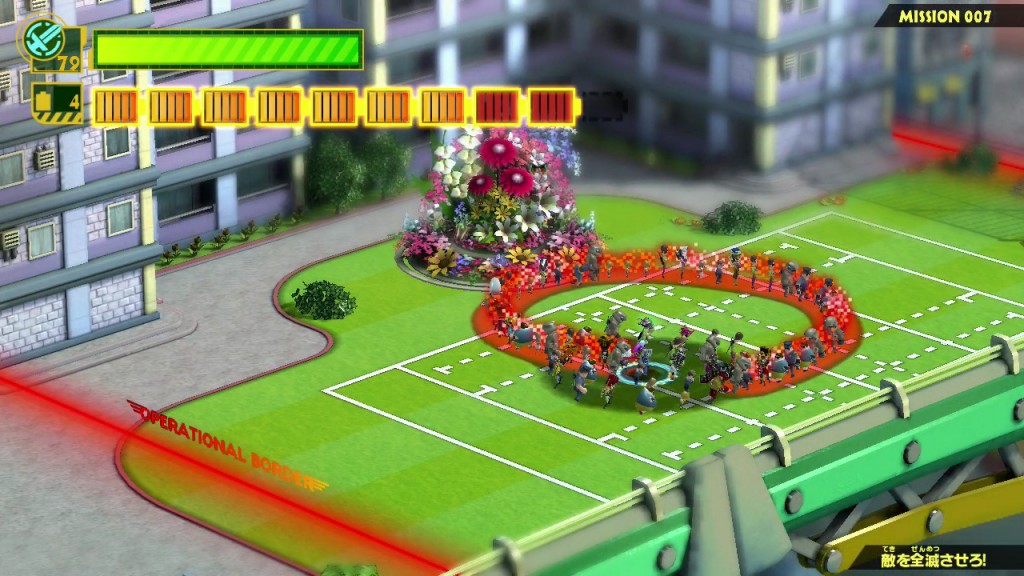 Draw a circle for Unite Hand! 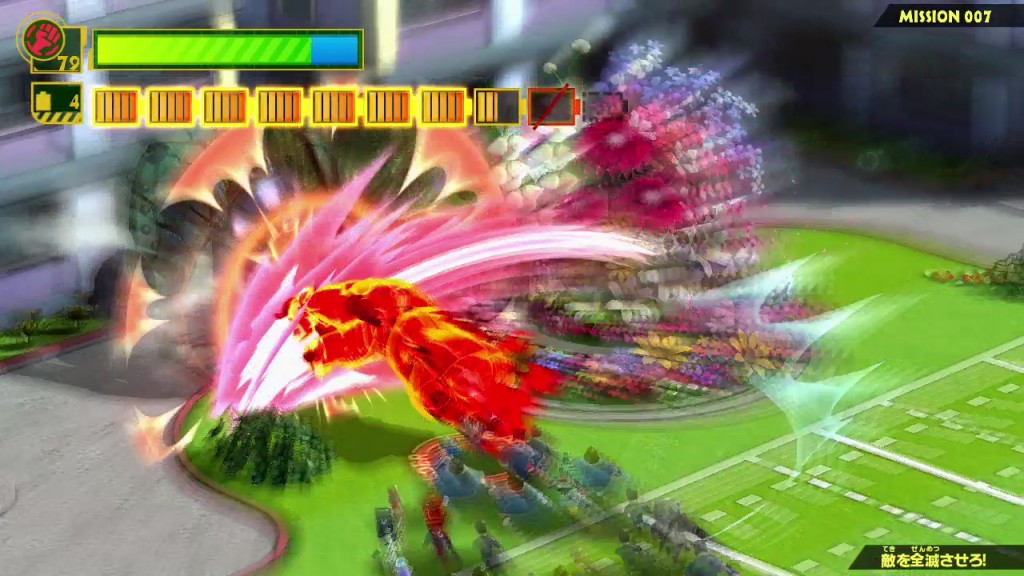 Now press A to deck the enemy with a Wonder-Punch! 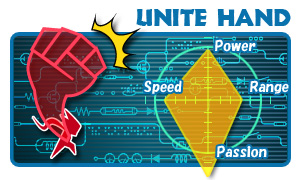 Like you’d expect, Unite Hand is a Unite Morph that packs quite a punch. Its speed also makes it useful for executing combos. Its range is somewhat smaller than the other Unite Morphs, so be sure you’re nice and close to the enemy before you start thwacking them. 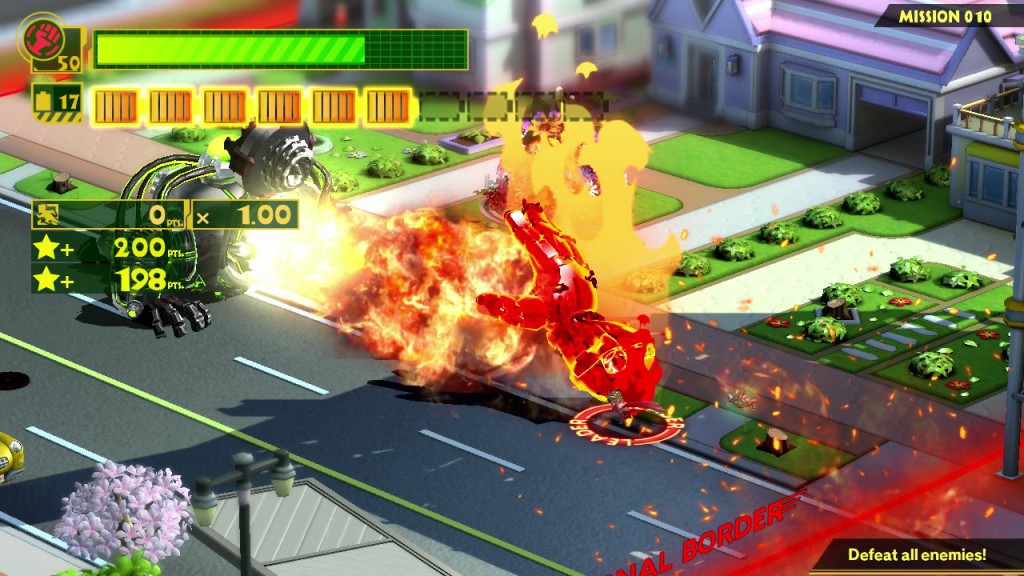 Enemy flamethrower attacks can talk to the Unite Hand.

But Unite Hand isn’t just an automatic punching machine. If you ever see the enemy getting ready to unload a fire-elemental attack, take out your Unite Hand to absorb the heat and negate the damage.

Does the hand in that picture above look like it’s on fire…? Maybe there’s more to the name Crimson Fist than we thought. 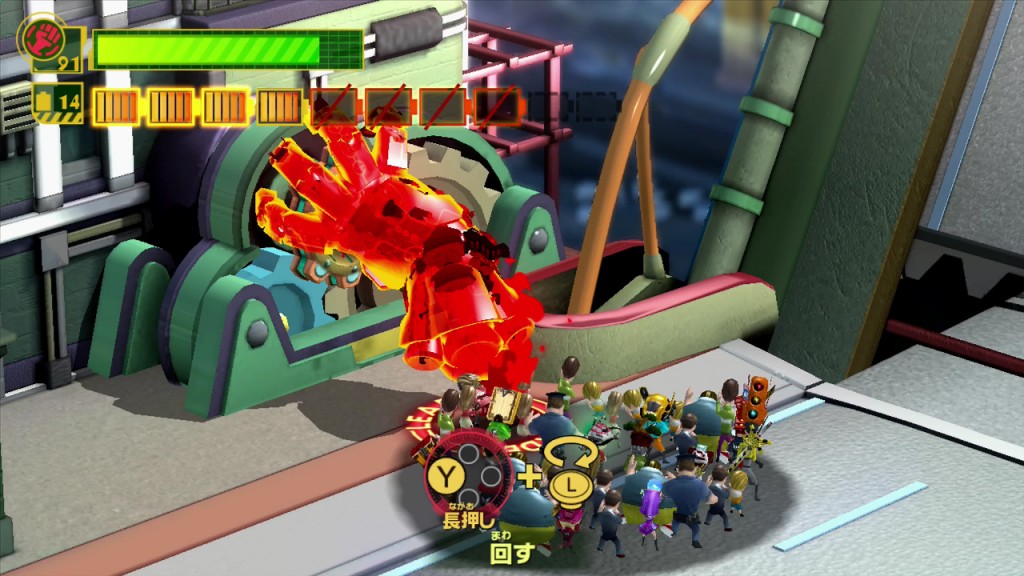 Is there anything Unite Hand can’t do?

If you’ve got five giant fingers at your disposal, you obviously don’t want to just limit yourself to throwing punches.

Red’s Unite Hand can turn all sorts of knobs, dials and cogs that you wouldn’t be able to twist by normal means. 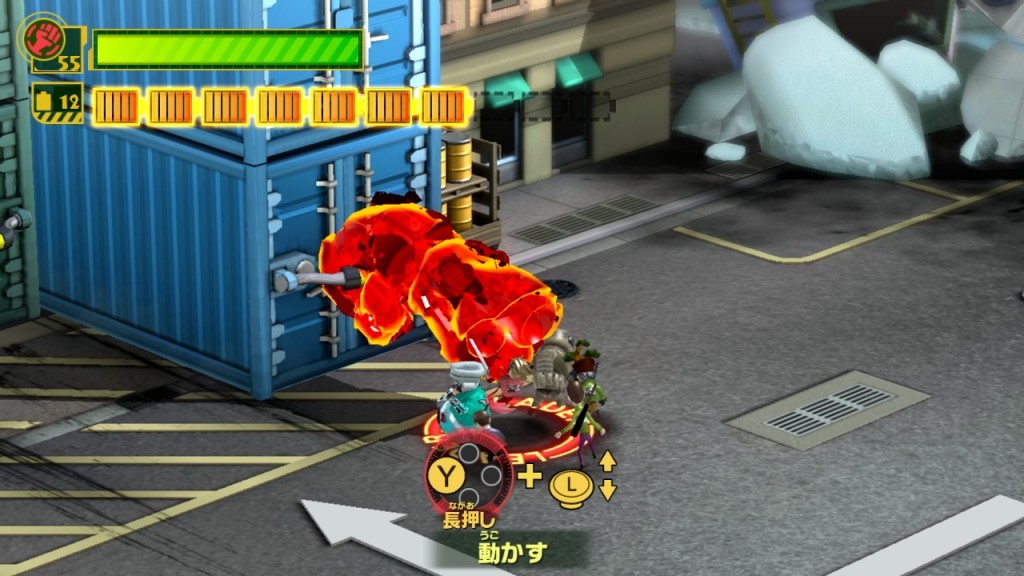 If it’s got a handle, then you’ll probably want to use Unite Hand. Try it out in different areas of each stage to solve puzzles and advance through the level.

At school, Wonder-Red goes by the name Will Wedgewood. None of the students realize his true identity, but inside he enjoys the popularity his superhero persona receives. 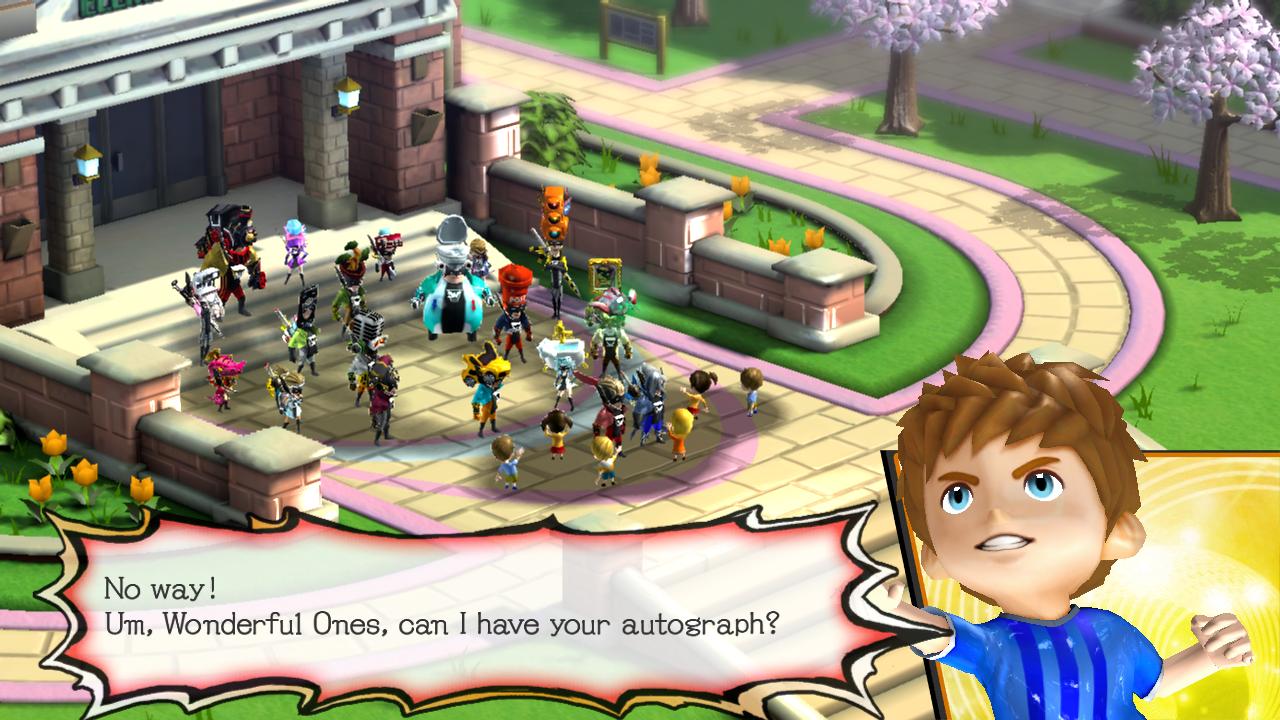 A cute Blossom City kid asks for all these Wonderful Ones’ autographs.

That same Wonder-Red however, experienced a traumatic event in his own childhood that he is still struggling with now. 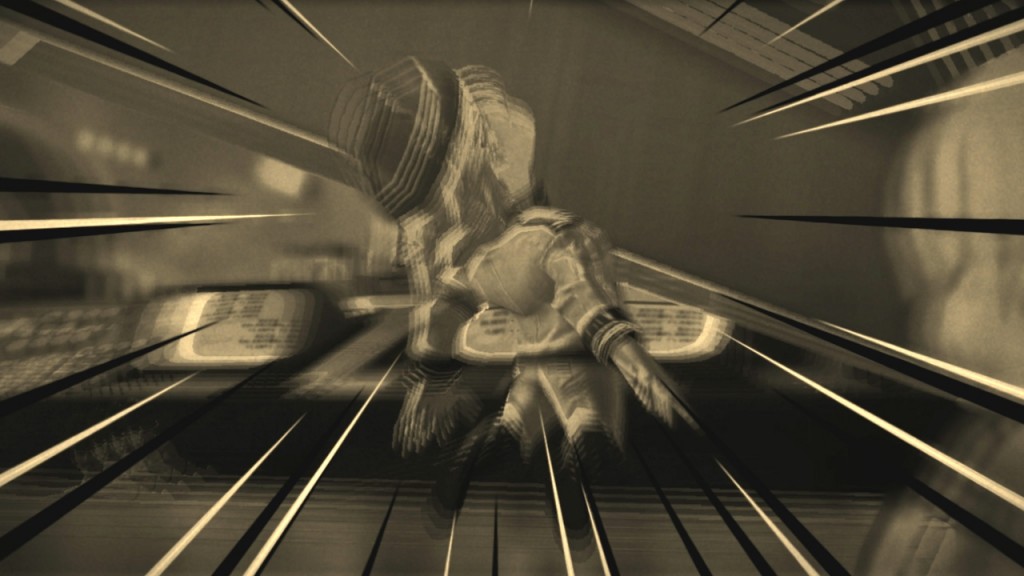 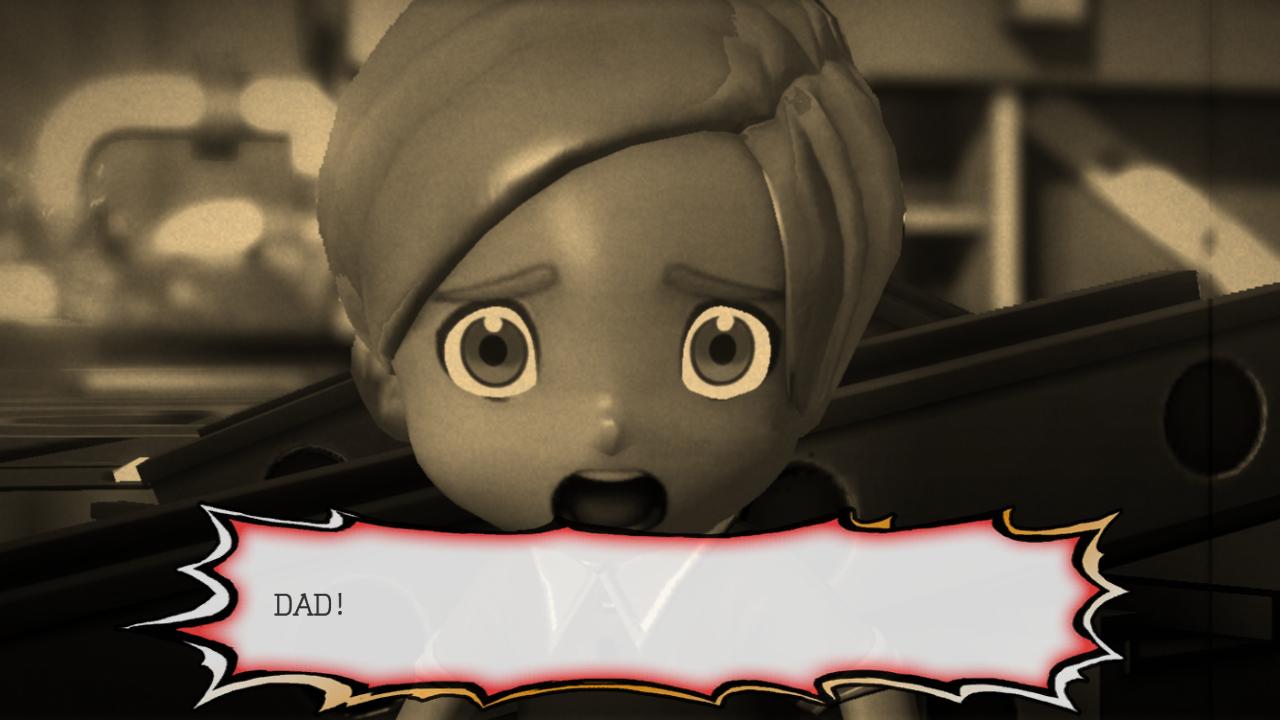 What happened to Red’s dad?

Before long, his path intertwines with a young boy who happens to be one of Red’s very own students. It seems that the kid has a deeply troubled past of his own. Will Red be able to reach out and save his student? 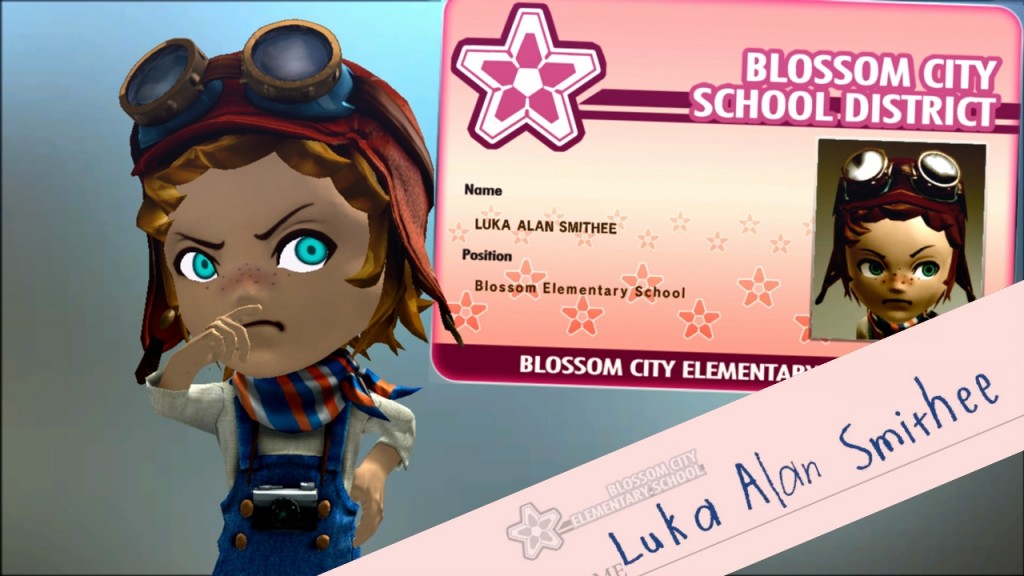 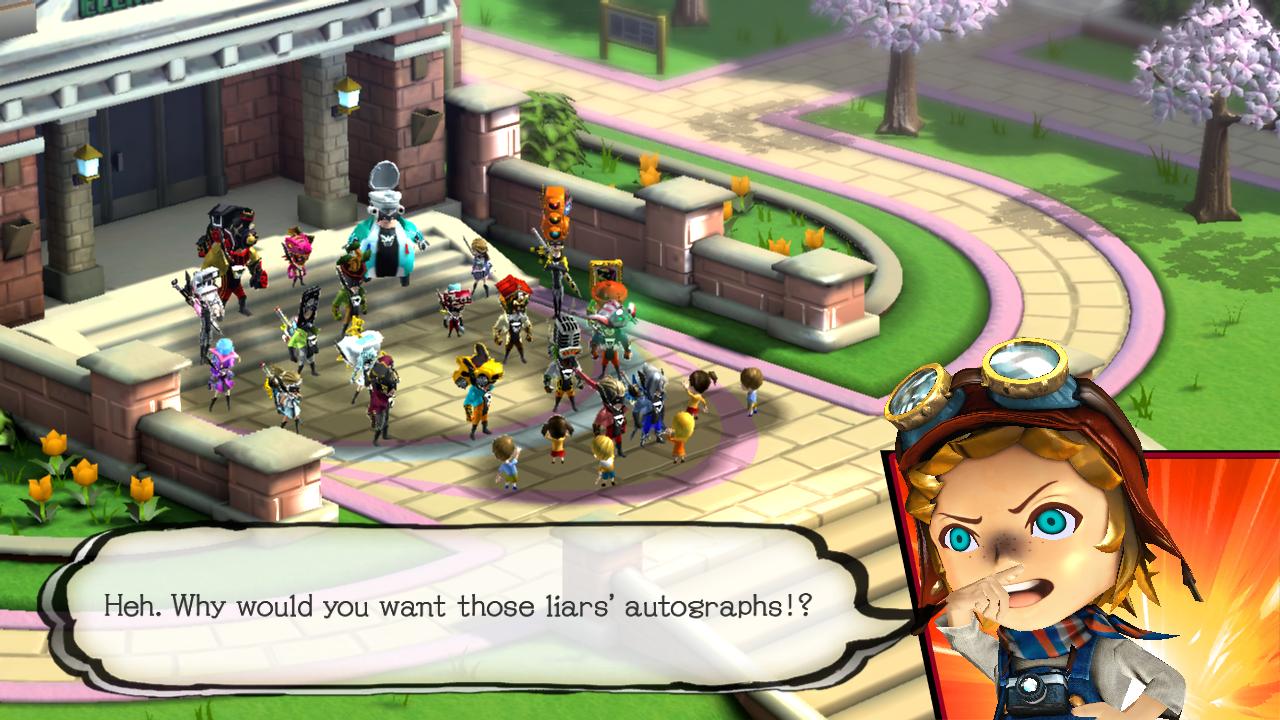 Luka expresses his disappointment in the Wonderful 100.

Next time we’ll discuss Wonder-Red’s teammate, Wonder-Blue. Blue is a hot-headed Wonderful One with a Unite Morph that takes the shape of a sword. Having worked his way up in the ranks of the Los Angeles Police Department, he’s not so happy having to be ordered around by Red, a.k.a. the new guy. Slight turbulence might be in the cards.

Next episode:
“Swordsmanship, thy name is Blue”

This is actually the first game Hideki Kamiya has directed that features Japanese voice acting (!) Of course, as usual, the game contains English voice acting as well.
We’ve actually gone and included both the Japanese and English voice track in the game so that players can choose the one they prefer. How’s that for service, eh? 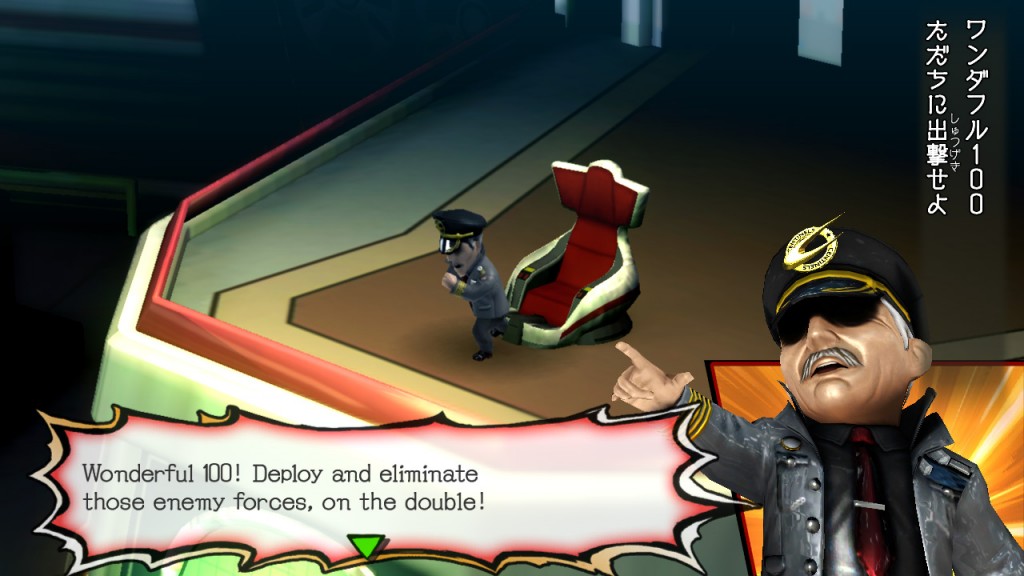 The Japanese audio captures the nuances of the original scenario, whereas the Japanese subtitles condense the essence of the original text into something that is easy to understand at a glance when looking at the images.
In both cases, Director Kamiya sacrificed hours of sleep to find exactly the right words, scratching his head so hard he might have broken a nail at some point.
In many cases, the Japanese voice cast is quite different from the English, so if you play through the game once in English, you can play through again changing the voices to Japanese and it’ll be a whole new experience! Two for the price of one!