The story so far:
The GEATHJERK Federation Supreme Armada is about to set foot on planet Earth with an army of unprecedented size. There is no time to lose. The heroes are already waiting for your arrival in Blossom City. Now is the time to unite up! Wonderful One-Oh-One!

Hey, it’s Ichi!
“The Wonderful 101” has finally been released in Japan and Europe! Did you pick up a copy yet!?
Now that some people have already managed to get their hands on the game, we’ll be looking at some of the bosses that will be making your life miserable along the way.
We introduced some foes to watch out for before, but this time we’re focusing on actual bosses. You’ll have to defeat them all in order to reach your goal. 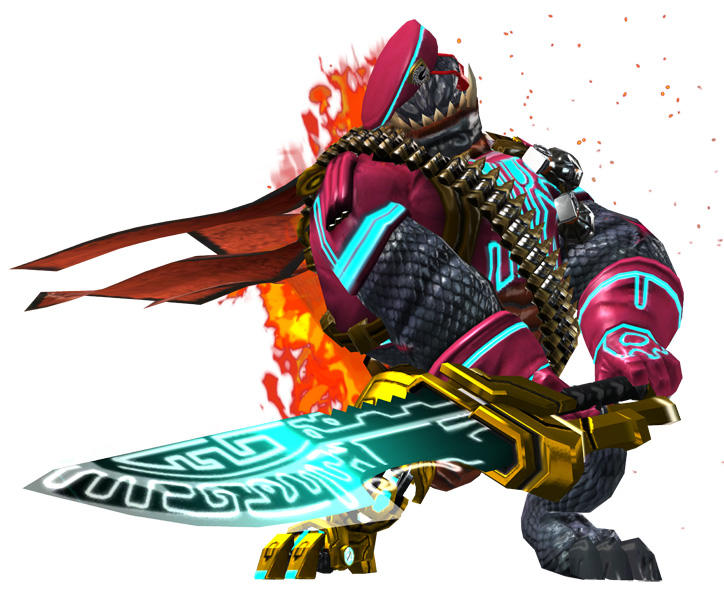 Particularly twisted even by GEATHJERK standards, Laambo has left a trail of atrocity across the galaxy.

As a soldier of the savage Golokey tribe from planet Doquuzu, Laambo possesses an extremely violent, war-loving nature. Fond of invasion tactics, he will give orders from the front lines, often happily joining the fray himself.

His weapon is a psycho-sword formed from his fighting spirit, called the Dechno-Bo. Having tamed the violent space monster Diekuu Ohrowchee of the Joolar solar system, he storms about the galaxy as if he has already conquered every system, near and far. 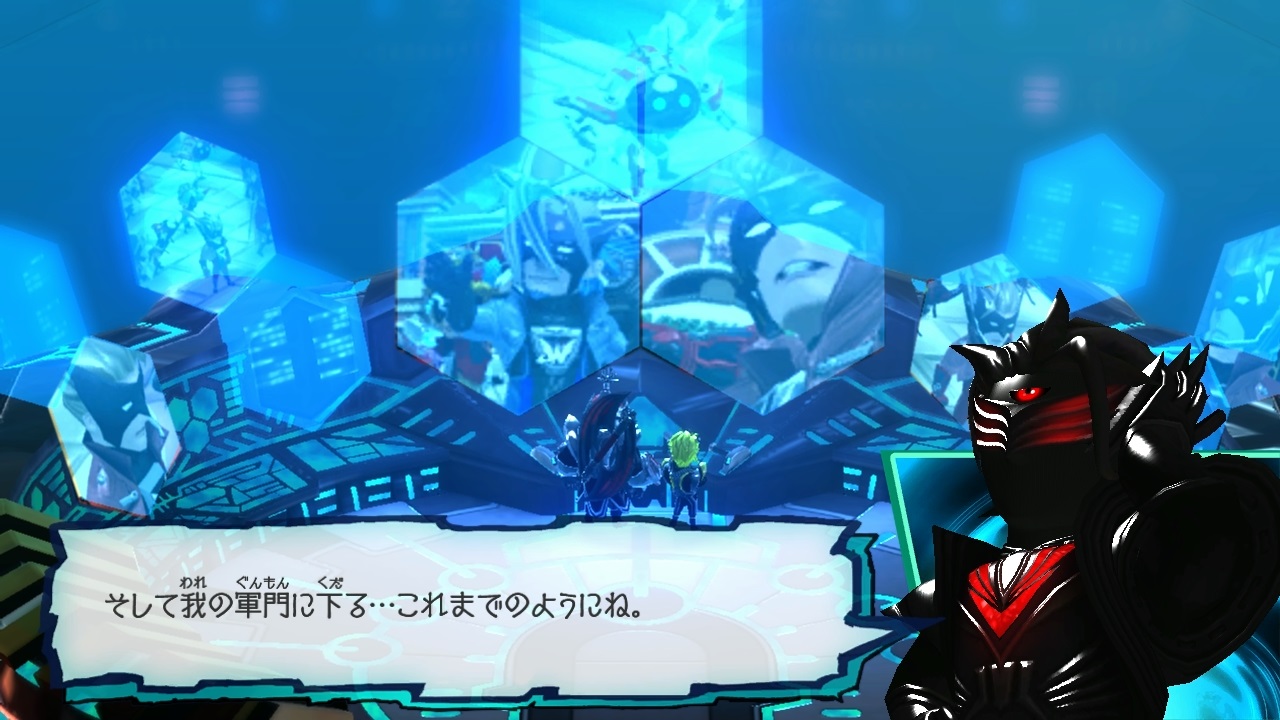 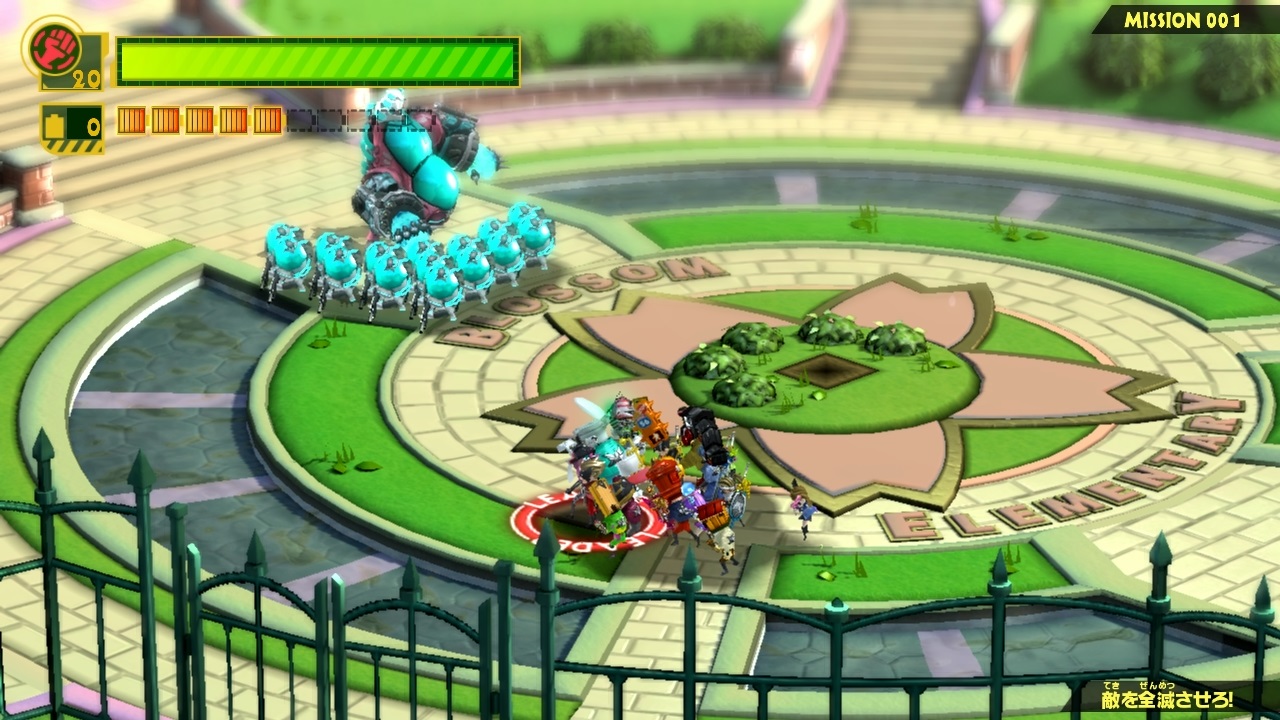 Laambo was involved in the invasion war 20 years ago as well. However, after a long and arduous battle, the Gaia Defense Army and CENTINELS managed to repel the GEATHJERK forces.
He bears a deep grudge against the Wonderful One-Double-Oh, who are looking poised to fend off the invaders of this generation as well. 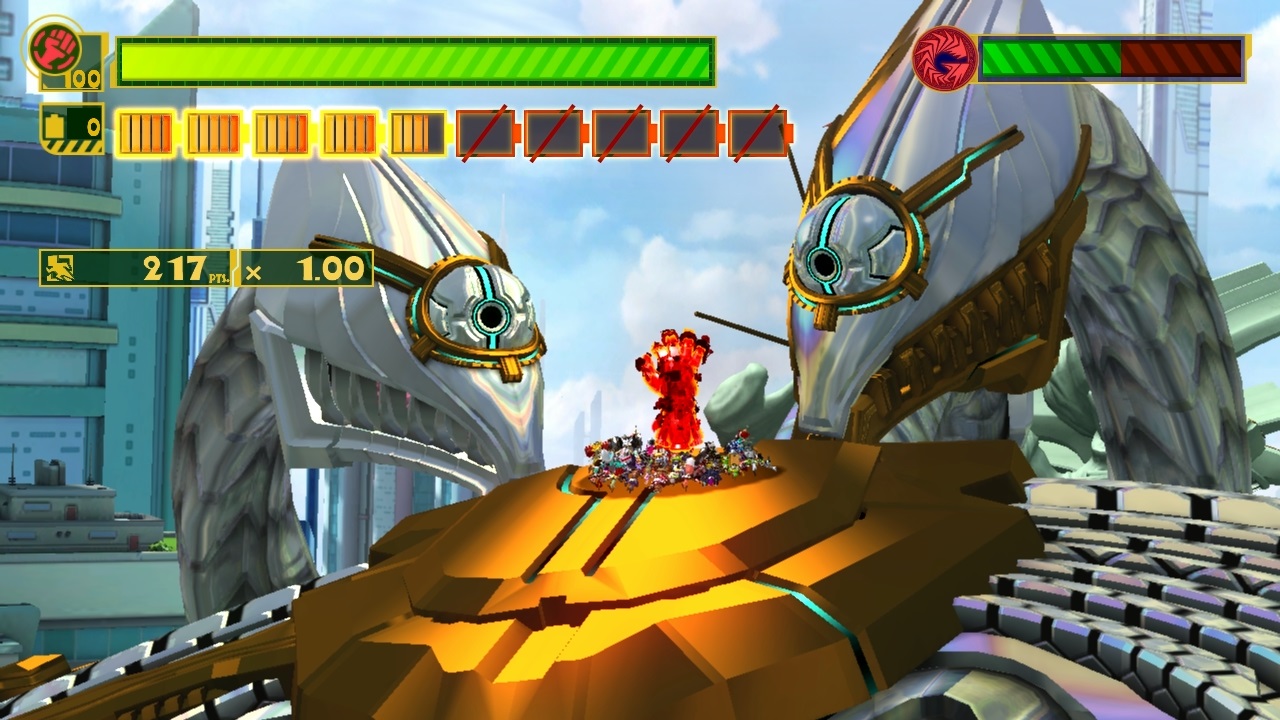 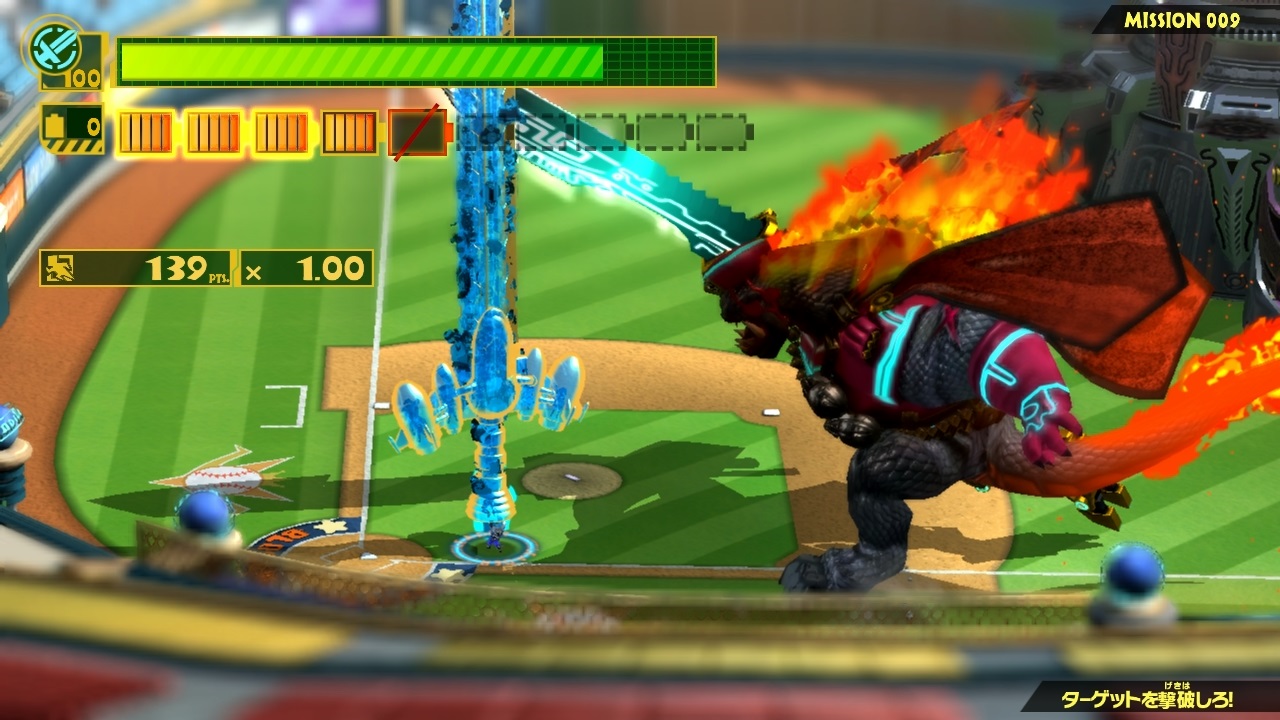 Laambo has even tamed and weaponized a space monster! He has elevated destruction into an art form and perfected it.
He’s doesn’t quite possess a petite physique himself either, and he brandishes an impressive blade that even matches Unite Sword! What can our heroes do to stand up to him!? 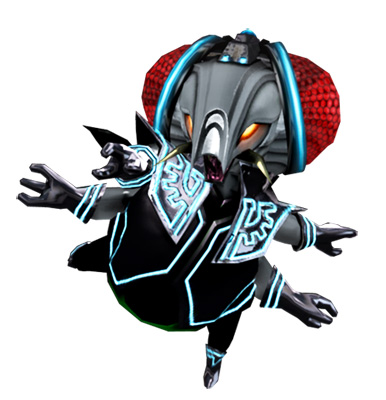 This GEATHJERK scientist leads his own military unit and is a prominent figure in weapons development. Wanna possess great intelligence, and comes from an extremely ill-tempered race, making him unequalled in the ability to construct the most gruesome and torturous of weapons.
Even after losing his home planet through extensive weapons testing, his urge for experimentation remained unsated, and he joined GEATHJERK as a means to find more weapons test sites on other planets.

Though bearing a small frame and little physical strength, he is a sly strategist, specializing in ensnaring his opponent in traps. He prefers to toy with them before delivering the final blow, one of the most distasteful parts of his insidious personality. 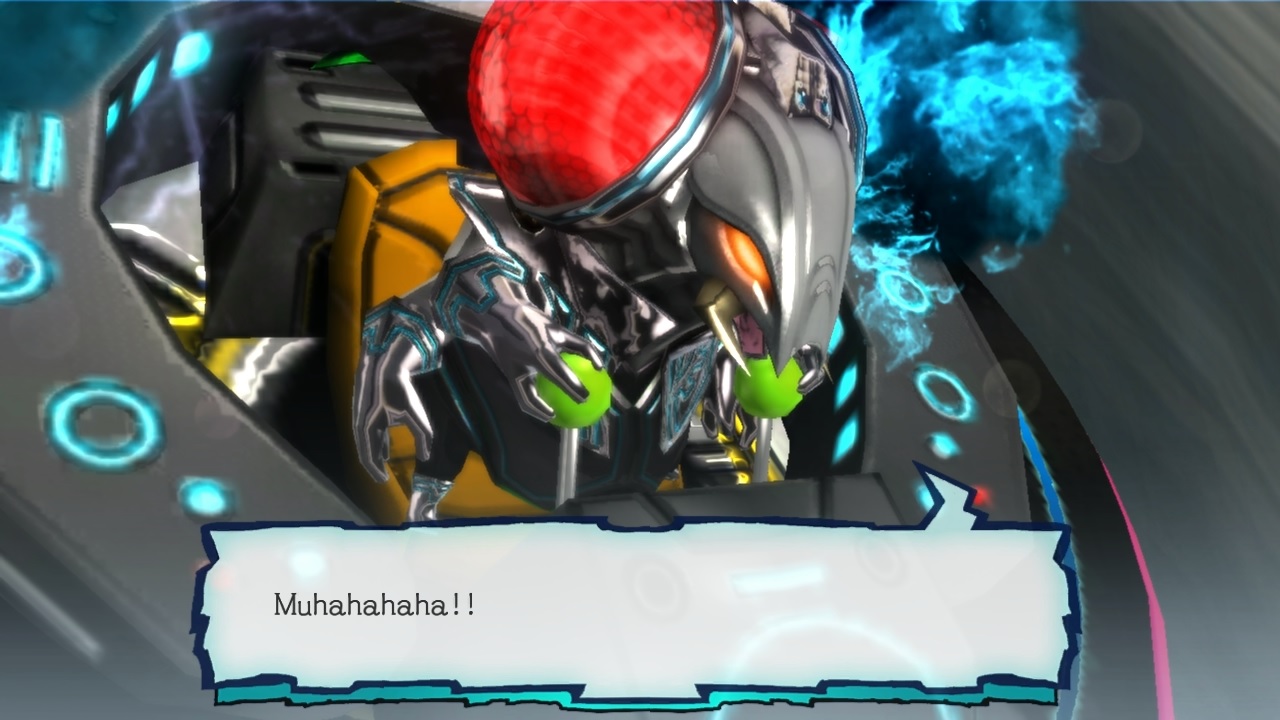 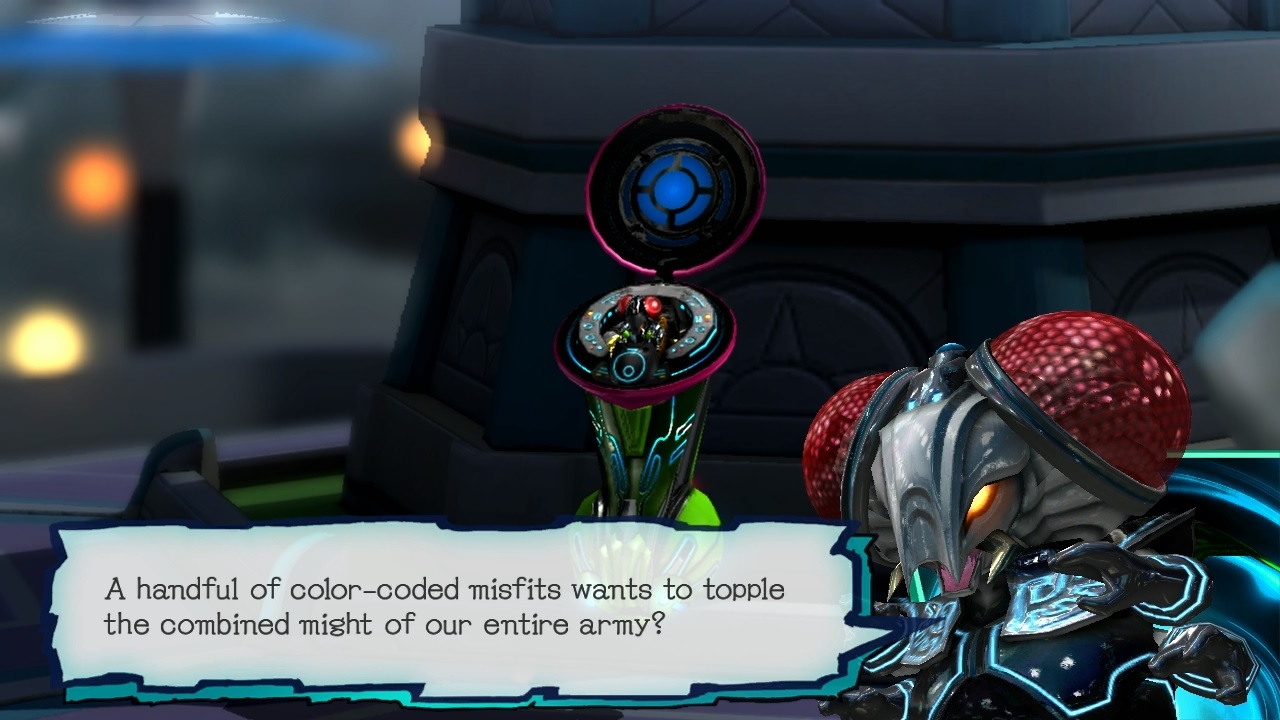 Even within the fiendish GEATHJERK army, Wanna has an especially vicious and malicious personality. Being the conniving little schemer that he is, getting closer to him will more than likely involve passing through various traps and obstacles, since Wanna doesn’t like to get his hands dirty. Approach this one with extreme care. 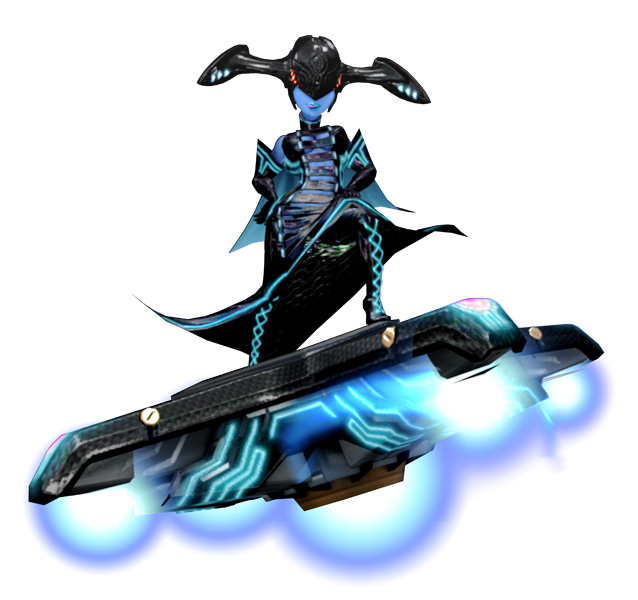 Originally from an aquatic race on the water-covered planet Ewwmee, this GEATHJERK femme fatale is unchallenged in her supremacy at underwater operations. The only female of the six GEATHJERK officers, her alluring figure is a weapon itself, capable of driving enemies to madness like the sirens of ancient myth.

Unusually vain, and terribly concerned about all things relating to beauty, she has a strong aversion to all other women, and detests anything unclean, or unsightly. Along with her obsession with beauty, she has traveled the galaxy in search of an aquatic environment suiting her liking. Having set her eyes on Earth, and its 70% water-filled environment, she intends to make it her own. 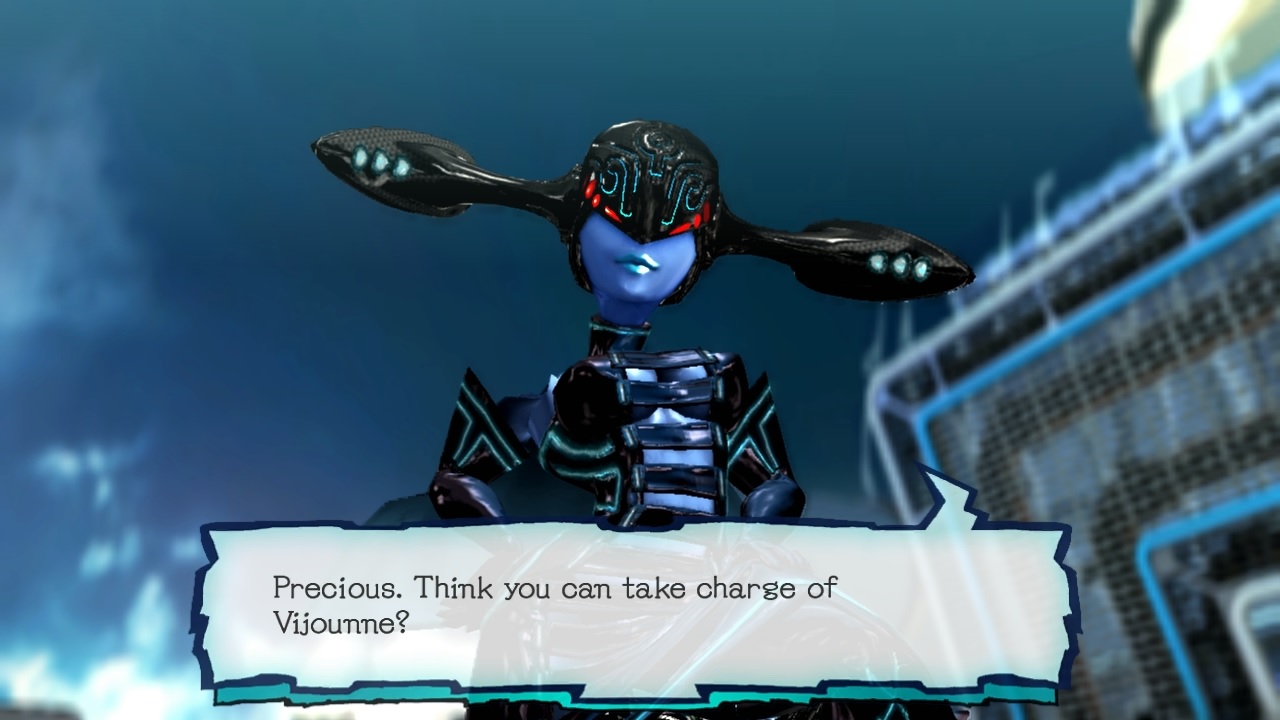 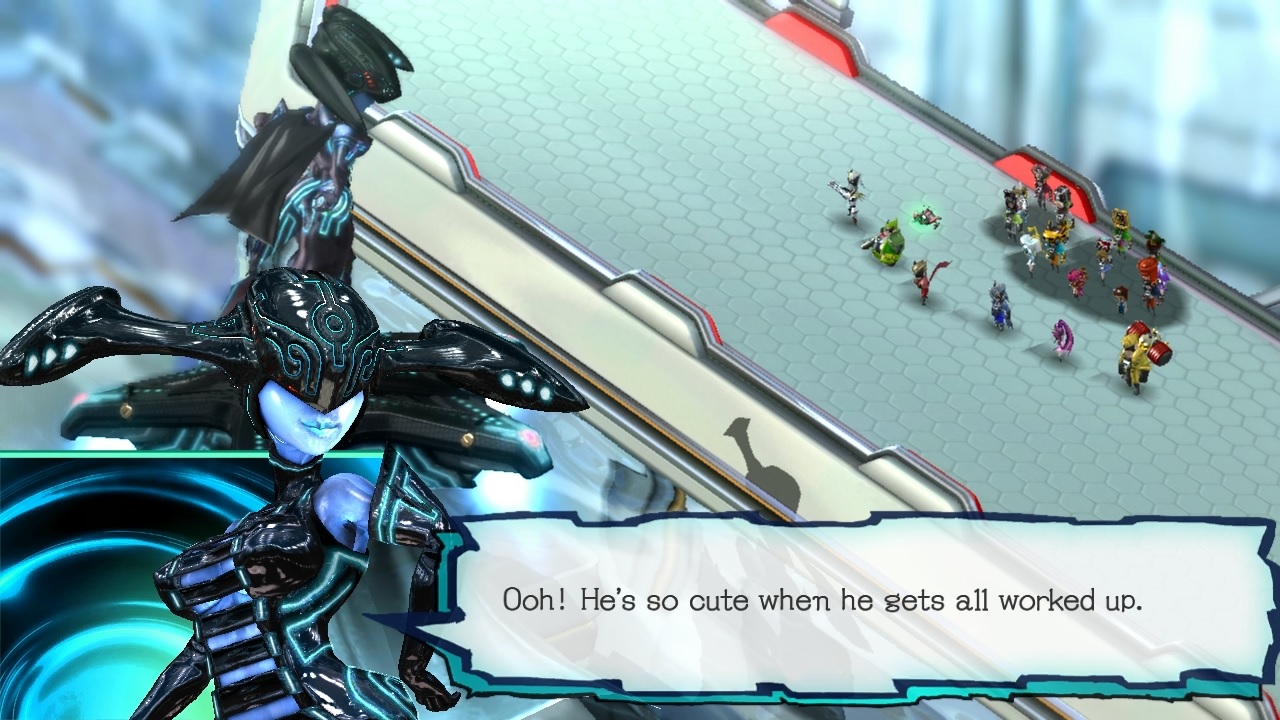 Vijounne, the only female officer of GEATHJERK. Judging from her predilection for taunting Red and Blue, it seems she prefers to toy around with her enemies while fighting them. Once you fall for her wily tricks, you will never regain the initiative.
Someone among the Wonderful One-Double-Oh might even be connected to her in some way…?

The GEATHJERK army has more officers than we’ve shown you here today.
Since they’re a bunch of evil and twisted misfits, each and every one of them is likely to employ various back-handed techniques to bring down the Wonderful One-Double-Oh and, by extension, Earth.
It is imperative that you see through their traps, find their weak spots and crush them with your iron fist of Justice.

The GEATHJERK Federation Supreme Armada has already found its way to planet Earth and into the homes of those who bought the game.

Let this momentous day remain etched into everyone’s memories as the prologue to “the battle in which mankind vanquished GEATHJERK forever!” There’s nothing that would do us more proud. We hope you have fun with the game!

For about a month, we’ve been updating this blog every single day. It hasn’t been that long, but we thank you for tuning in. (Sorry that I was rambling most of the time)
Don’t get me wrong, though! This is not the end of the updates. It’s just that, from here on out, updates will be slightly “less regular.”