So there I was, thinking it might be nice to write some tips & tricks for you, and before I knew it, I was staring at a wall of text of about 4000 words, so I decided to split the thing into 2 parts.
So without further ado, let us commence with Part 2, the sequel if you will, of our Tips & Tricks section.

Whether you’ve already finished the game or if you’re only just starting, these are all tips and tricks that are sure to make you want to replay the game, so make sure to check them out!

– UNITE… D’OH!
I’m sure you’ve all been in situations where you needed to cancel the Wonder-Liner, such as when you messed up when drawing the Wonder-Liner around something or when switching to a different Unite Morph, or when your hand slipped and hit the right stick or something (it happens!).
Normally, you’d press the Y button to restore the team’s formation, but there are some cases where carelessly pressing the Y button could actually put you in danger. 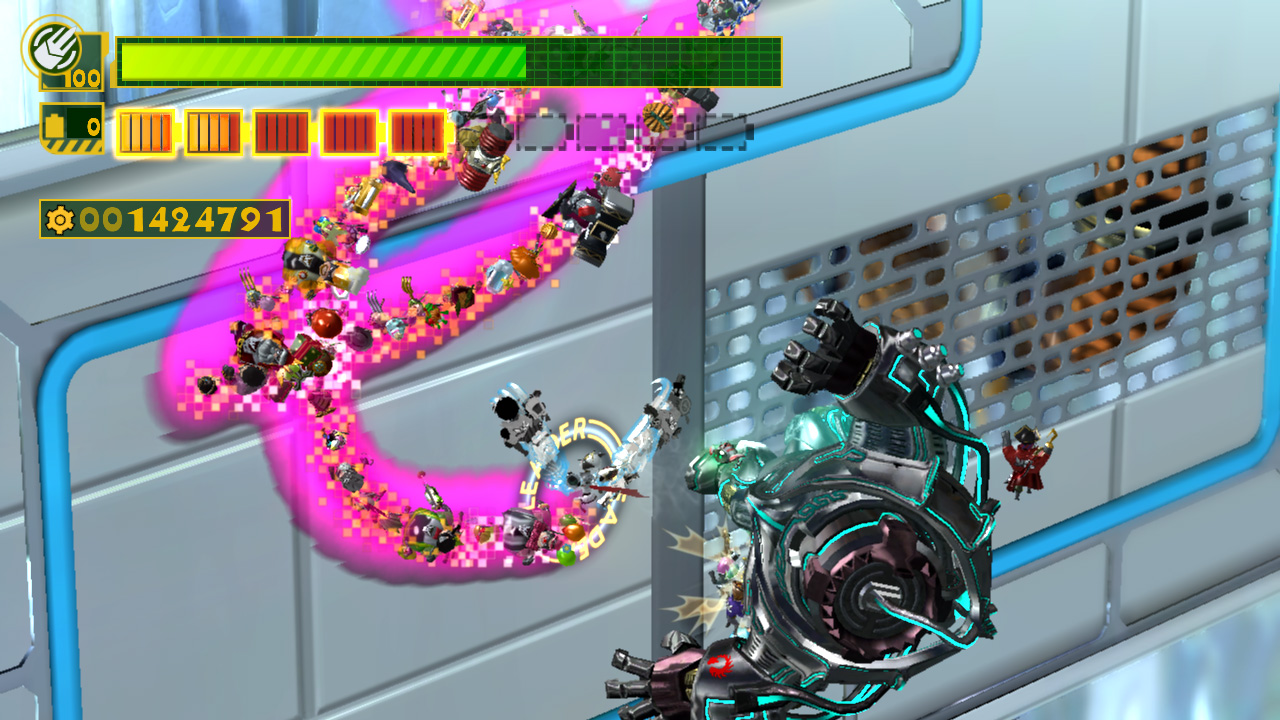 Both attacking and assembling will result in Unite Claw being dissolved. What is the team of superheroes to do!?

If you want to cancel the Wonder-Liner without dissolving a Unite Morph, just keep calm, don’t panic, and press the left stick button. This will allow you to quickly gather all members in your team.

– Keep ‘em Comboing
Unite Hand can be set aflame by catching fire attacks or by touching torches.
A burning Unite Hand isn’t just capable of setting fire to enemies, it can also shoot fireballs to attack enemies from a distance! 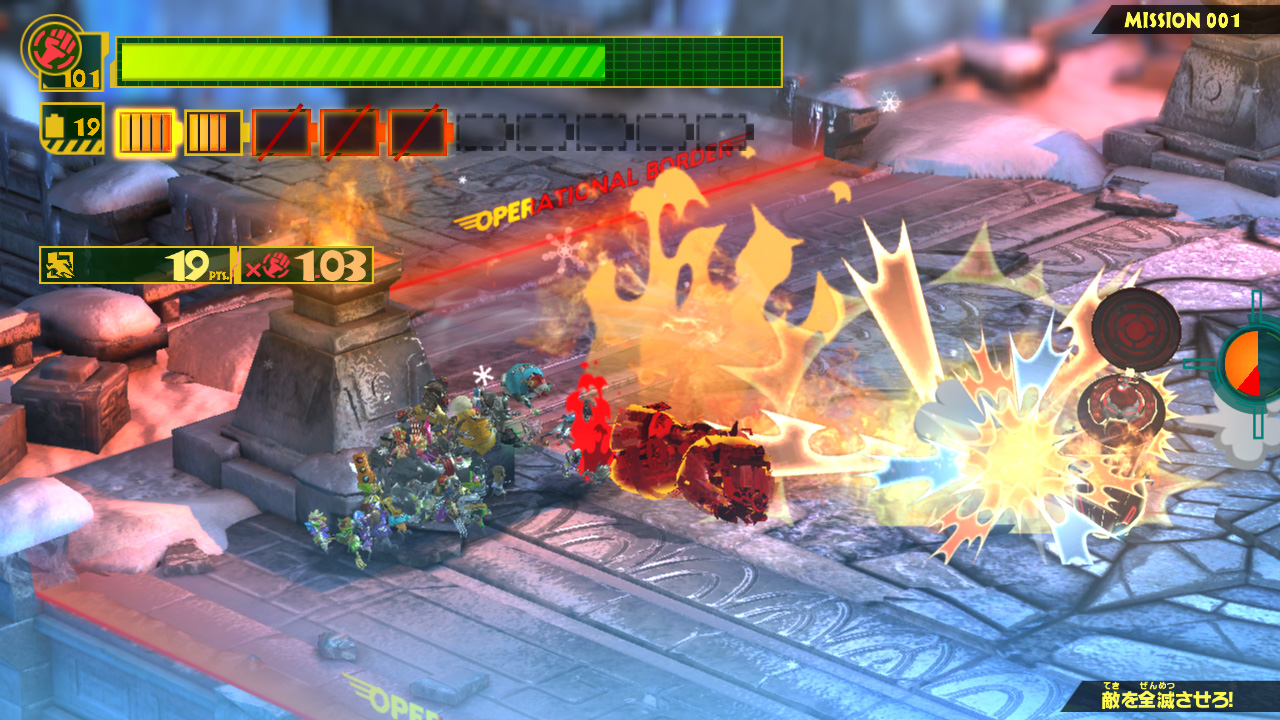 Everything is more awesome when it’s on fire!

What you might not know, however, is that it’s possible to gain this fire element in places where there are no flames. Try to rack up the combo multiplier to 2.5 by continuously attacking the enemy. This will cause the true power of Unite Hand to awaken, creating a flame effect. 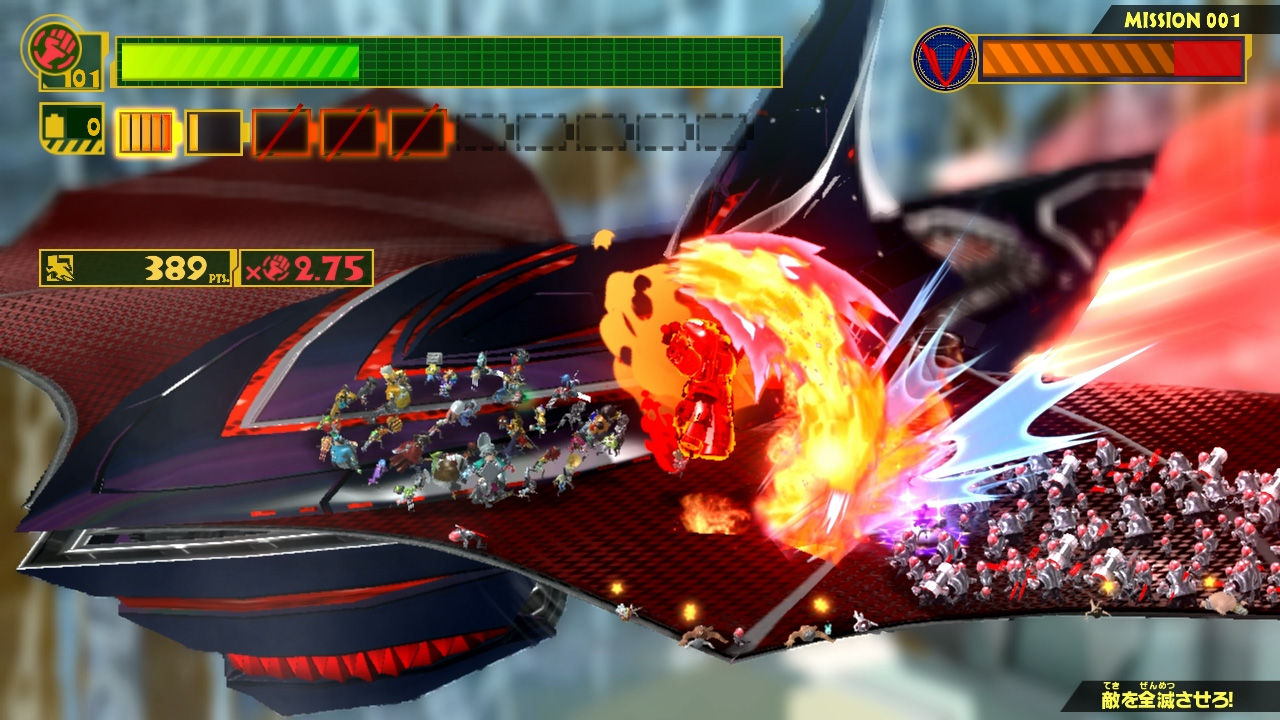 Unite Hand goes up in flames when the combo multiplier reaches 2.5

The same thing goes for Unite Sword. If the combo multiplier reaches 2.5, Unite Sword will be covered in a coating of dazzling electricity. 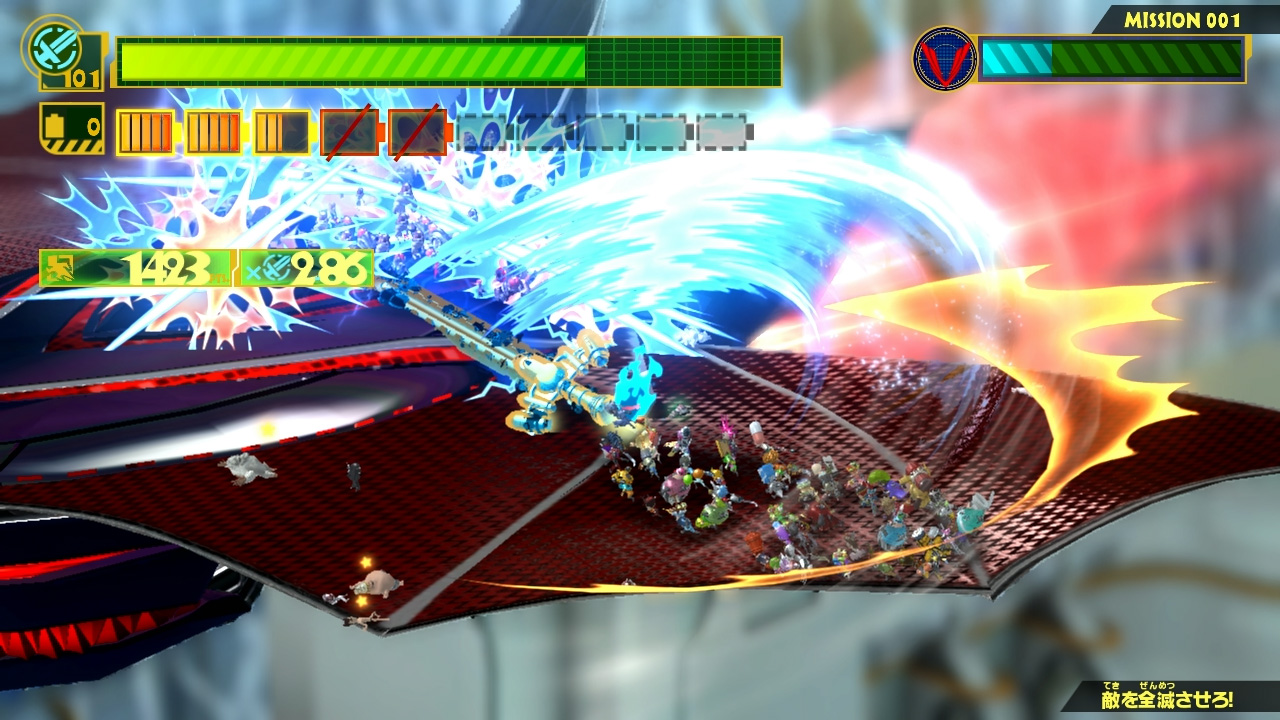 Unite Sword gets electrified when the combo multiplier reaches 2.5

The electricity effect causes enemies to be paralyzed for a short while.
Once you’ve become more proficient at the game and learn how to pull off powerful combos, these element attacks are something you should definitely keep in mind.

– Shooting for Style
As you progress in the game, you will reach a shooting stage that uses an isometric point of view.
The enemies don’t mess around here, so I’m guessing a lot of players might have trouble with this particular stage if they’re trying to get the Platinum Trophy. 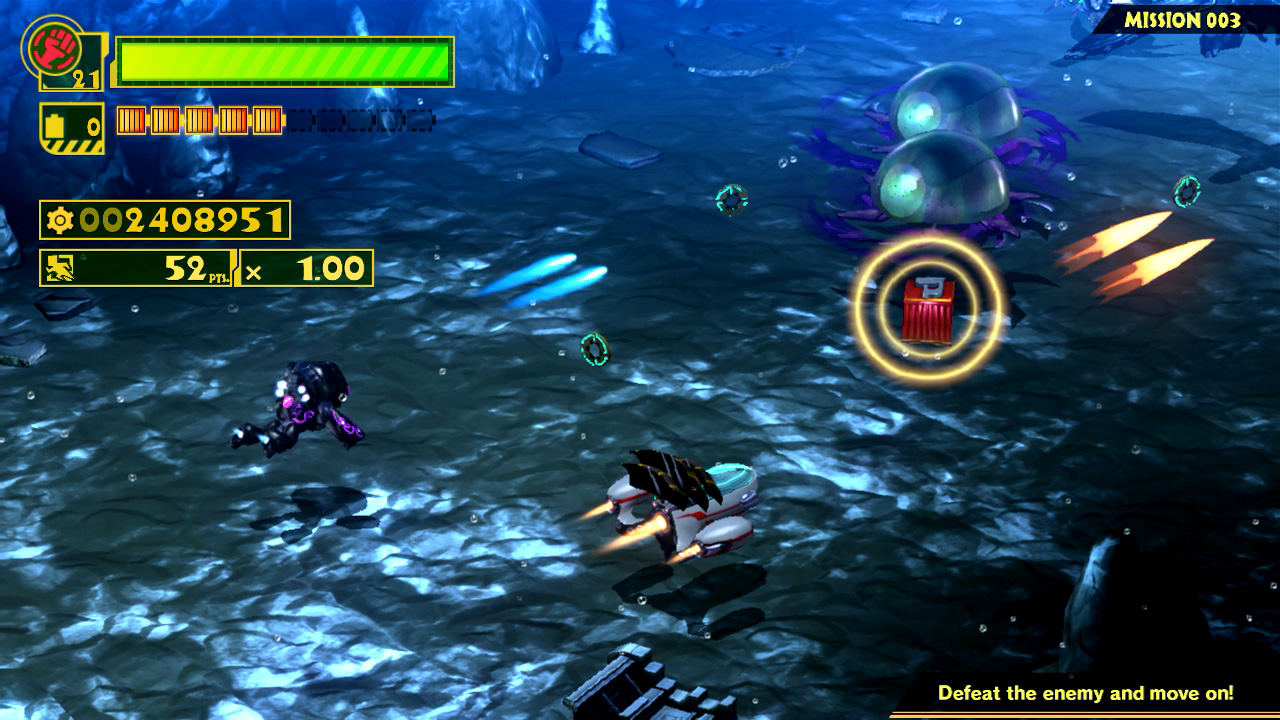 You can use a variety of Unite Morphs in this stage, but did you notice that it’s also possible to use Unite Guts by pressing the ZL button? 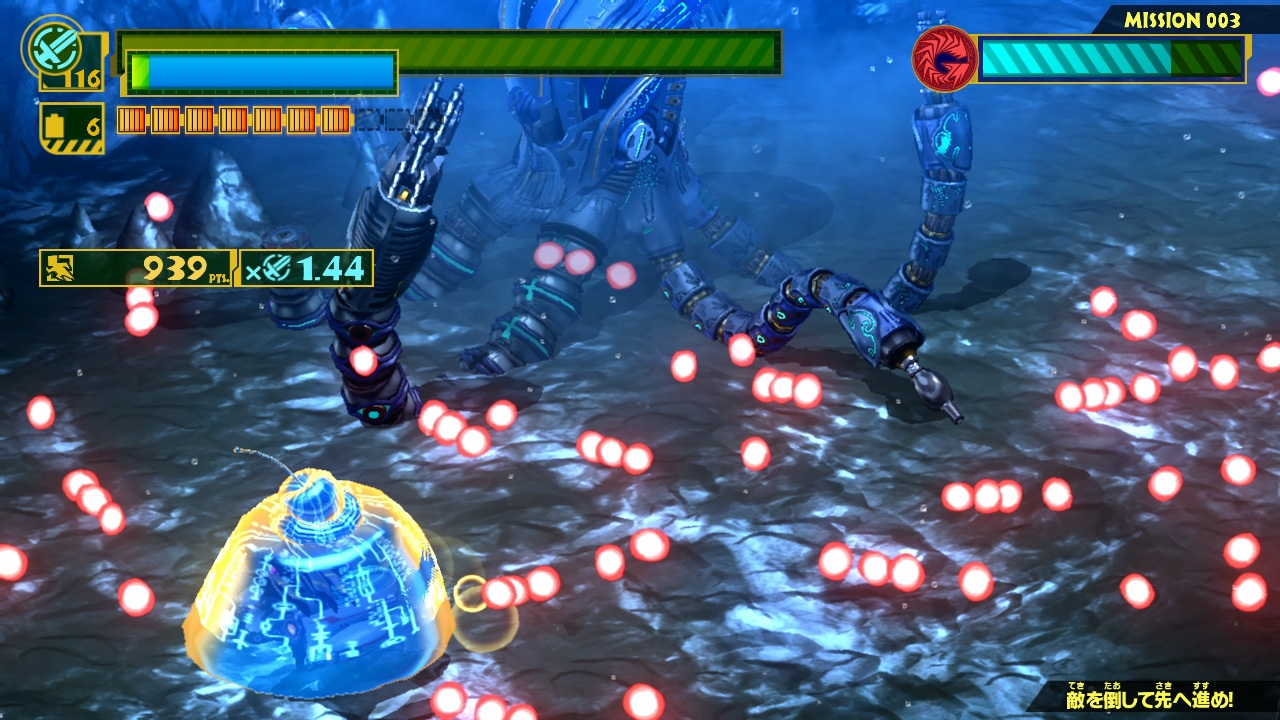 The answer to bullet hell, like so many things, is pudding.

Believe it or not, but Unite Guts actually allows you to absorb enemy bullets. Enemy bullets can also be extinguished by using Unite Bomb, but absorbing them actually extends you the tremendous service of filling your Unite Gauge. This shooting stage doesn’t require a lot of Unite Gauge though, so smart players might want to equip the “Energy Converter” Custom Block and see what happens…

But if you want to gain a high score, you’ll need to do more than just avoid being shot down. You’ll have to find a way of earning combo points somehow.
But you’re in luck, because I have just the easy “get combo points quick” scheme you require! 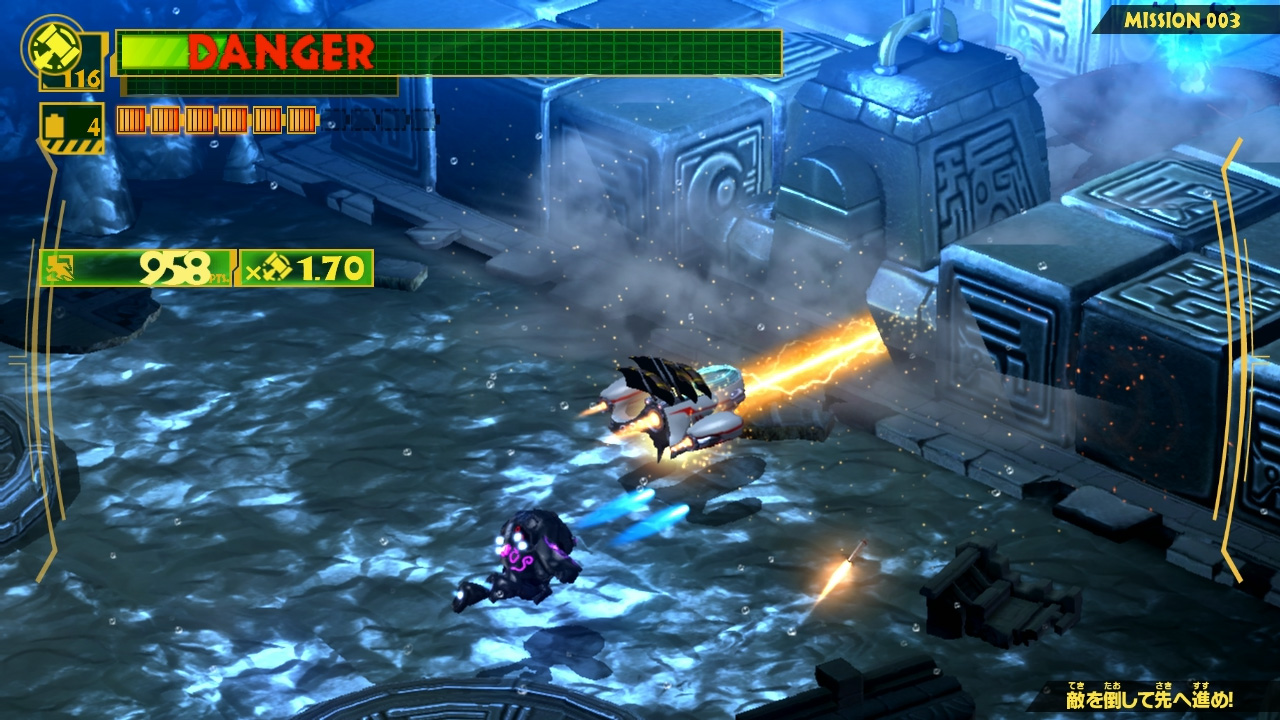 There are passages where giant weights come crashing down repeatedly.
Normally, you’d just wait for the right moment to slip through, but in fact, the Unite Hammer and its ability to “stop heavy things coming in from above” come in very handy here. 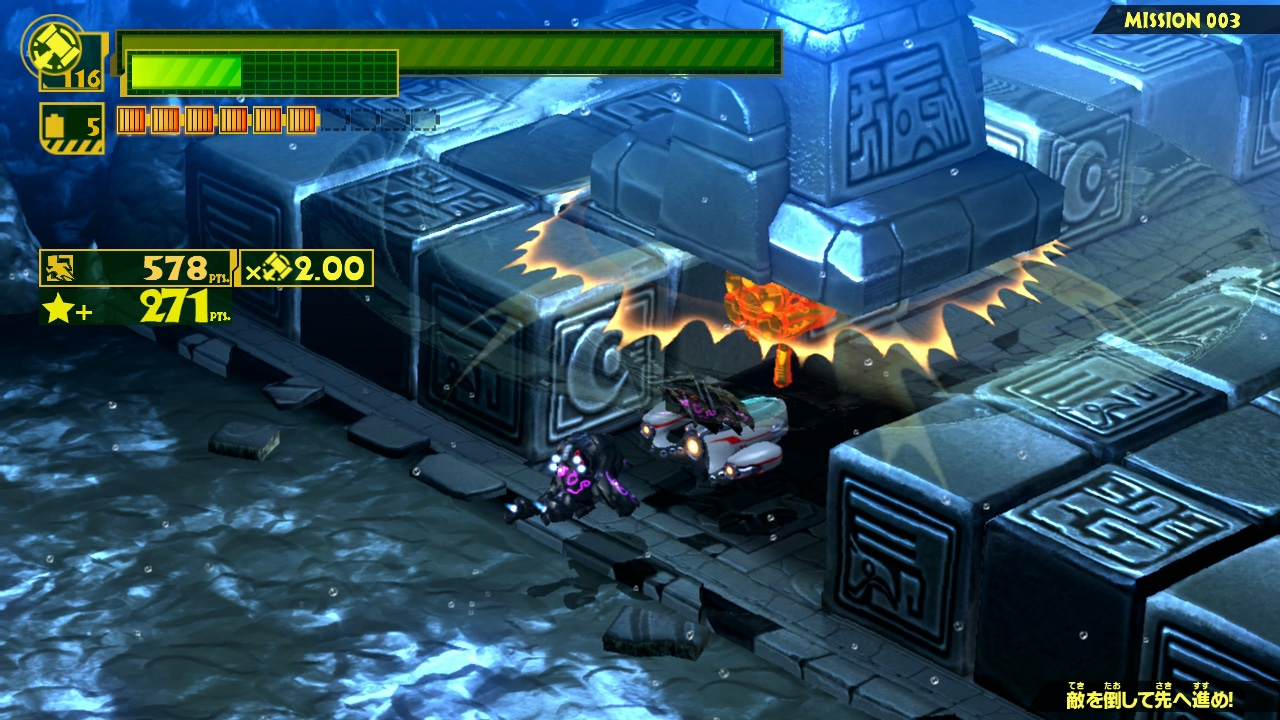 Stopping the weights will earn you points. We’ve made this too easy for you, really.

The falling weights will not only be reflected, but you will earn bonus points to boot.
Up to this point, the game had been about desperately avoiding the weights, but now you’ll want to position yourself right under there to bounce those weights back and rack up some serious points!

*Bonus*
When your vessel changes direction, exhaust flames will come out of its thrusters.
If you keep waggling the left stick, you can keep a fairly constant stream of flames going, and the nice thing about this is that they actually pack quite a punch. 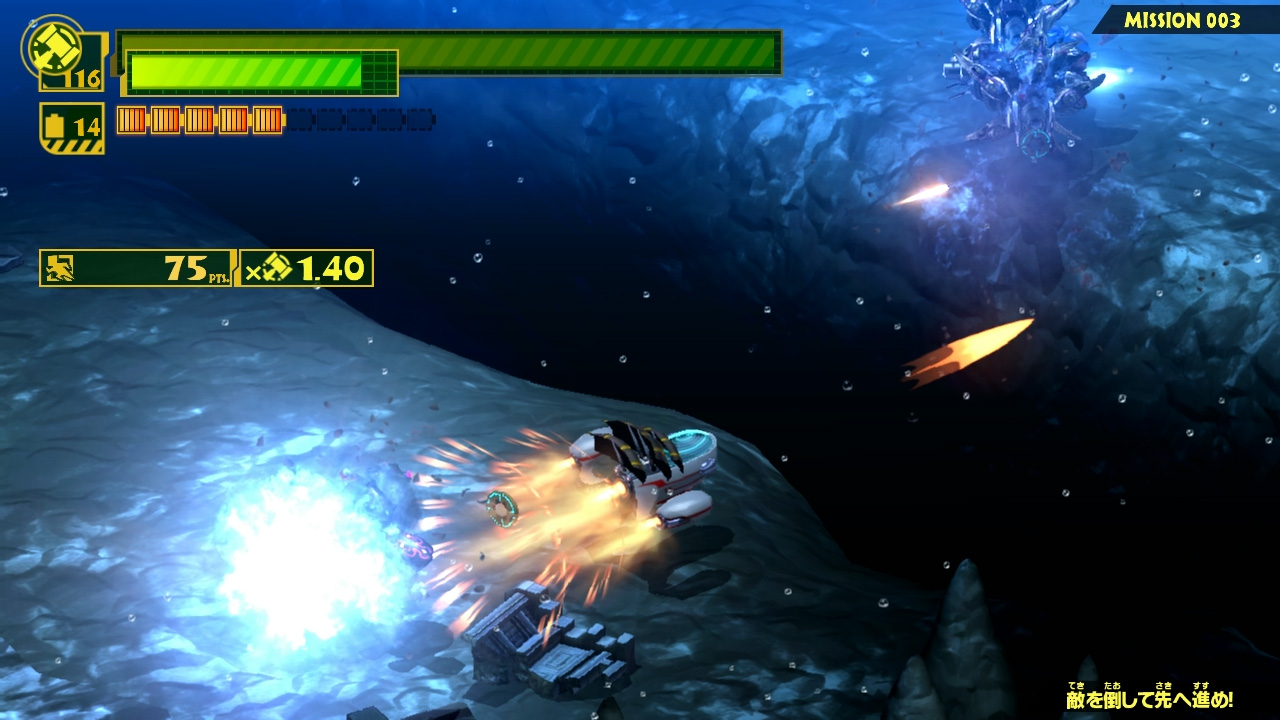 Try hitting enemies that come up from behind. You can destroy them easily AND look cool at the same time.

It takes a little bit of practice to actually hit anything, but if you do manage to pull it off, it will make you look like a boss like nobody’s business.

– The Commander is Watching
If, while playing the game, your mom decides that she wants to talk to you, or if you suddenly have to go to the toilet, opening the Status Screen with the + button is a good and easy way of dealing with the situation, but did you know that the game can be paused by pressing the + button and the – button at the same time? 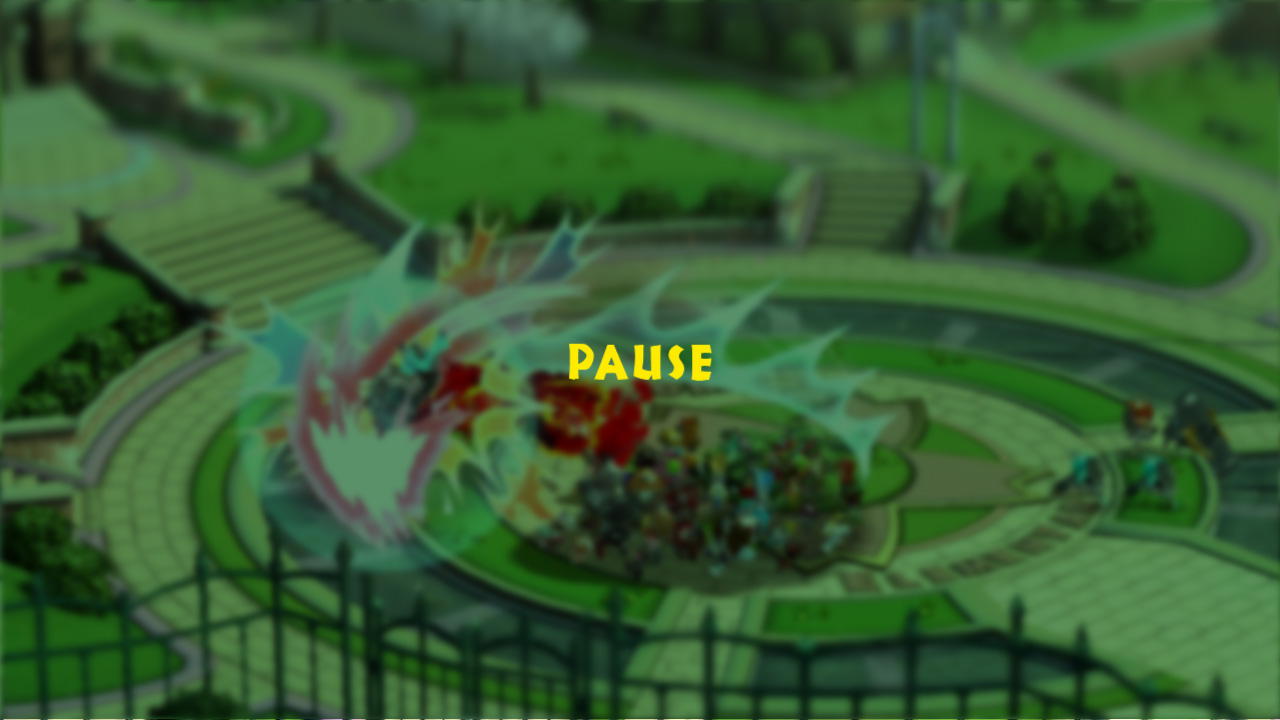 It has the same effect in that it momentarily freezes the action, but pausing the game via the latter method does not involve the screen changing. Instead, you can just see the action still frozen in the background.
The advantage of this is that it tells you exactly what you were doing when you start playing again, so if you need to pause the game during battle, I recommend you press the + and – button simultaneously.

“Get back here this instant! The world depends on you!” – Commander Nelson

There’s no escaping the all-seeing eye of Commander Nelson.
His comment is different for every single stage, so fans of the good Commander might want to pause the game even if there’s no good reason, just to see what he has to say.

– See-Through Masks
During dialogue cutscenes, the character that is speaking is displayed on the screen along with a speech bubble that shows what they are saying. 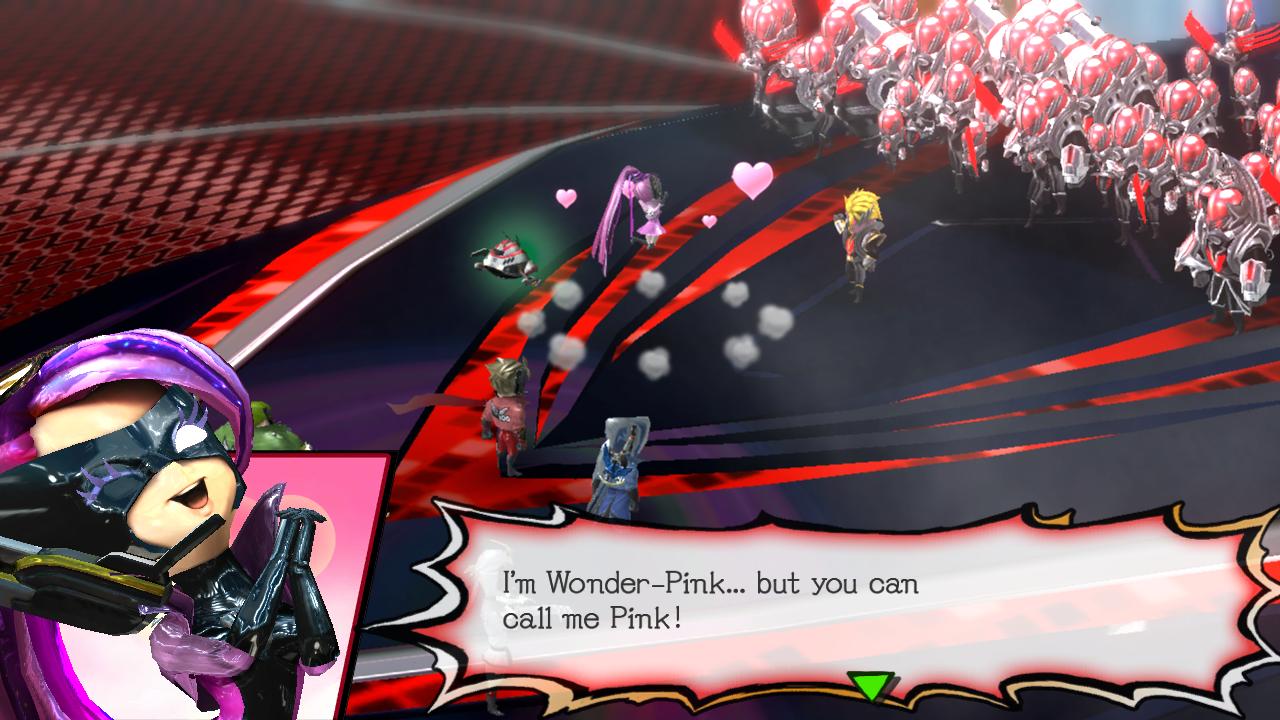 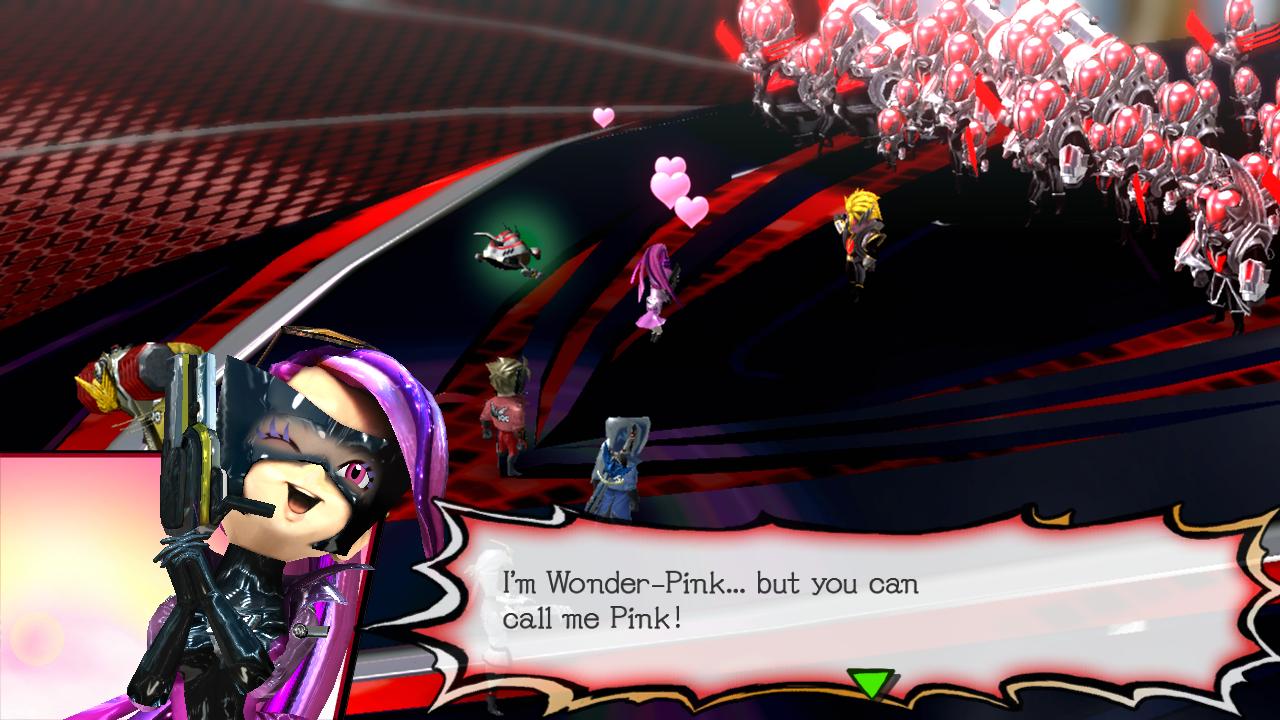 Top: Regular version, Bottom: Use the ZR button to make the mask transparent.

If you press the ZR button during these dialogues, the mask of the character will become transparent, allowing you to see the expressions of their eyes.
Haven’t you ever wondered what these characters really look like underneath their masks? Even if you’ve seen particular cutscenes lots of times already, watching them again with transparent masks will make them feel fresh and… uh… less masky. 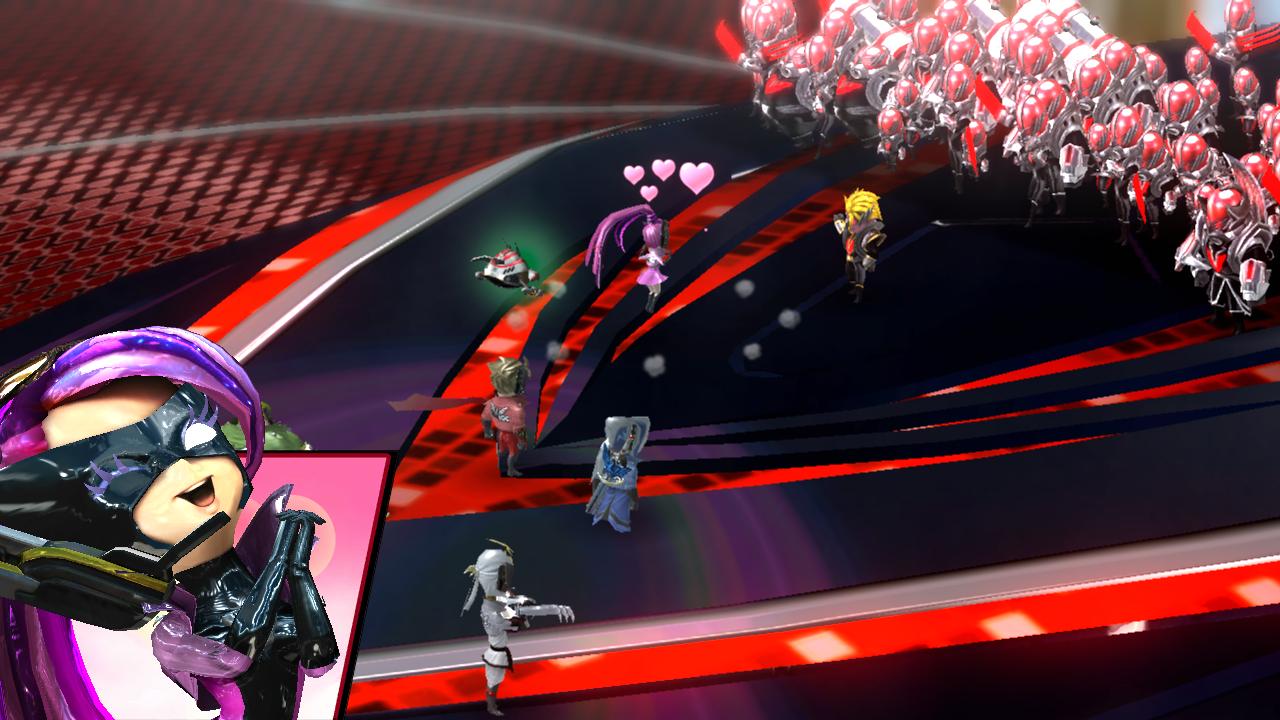 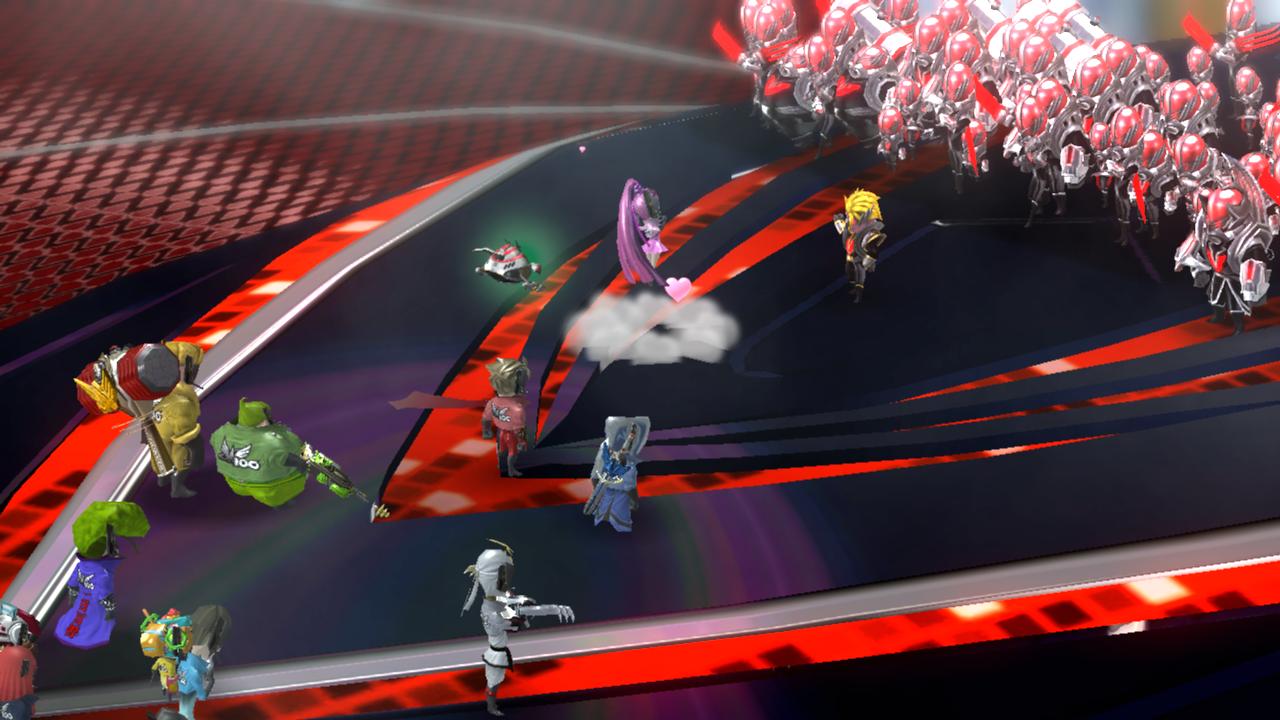 This is a nice feature if you want to see what’s hiding behind those speech bubbles.

– Skipping the Skipping Process
If you’re playing the game for the umpteenth time, you might get slightly annoyed by having to press the + button and selecting whether you want to skip a cutscene or not. If that is the case, try pressing the + button and the ZL button at the same time. This will allow you to skip the “Skip this cutscene?” prompt.

– Failure Can Be Fun
Throughout the game, there are QTEs where you are called upon by a Wonderful One to create a Unite Morph. 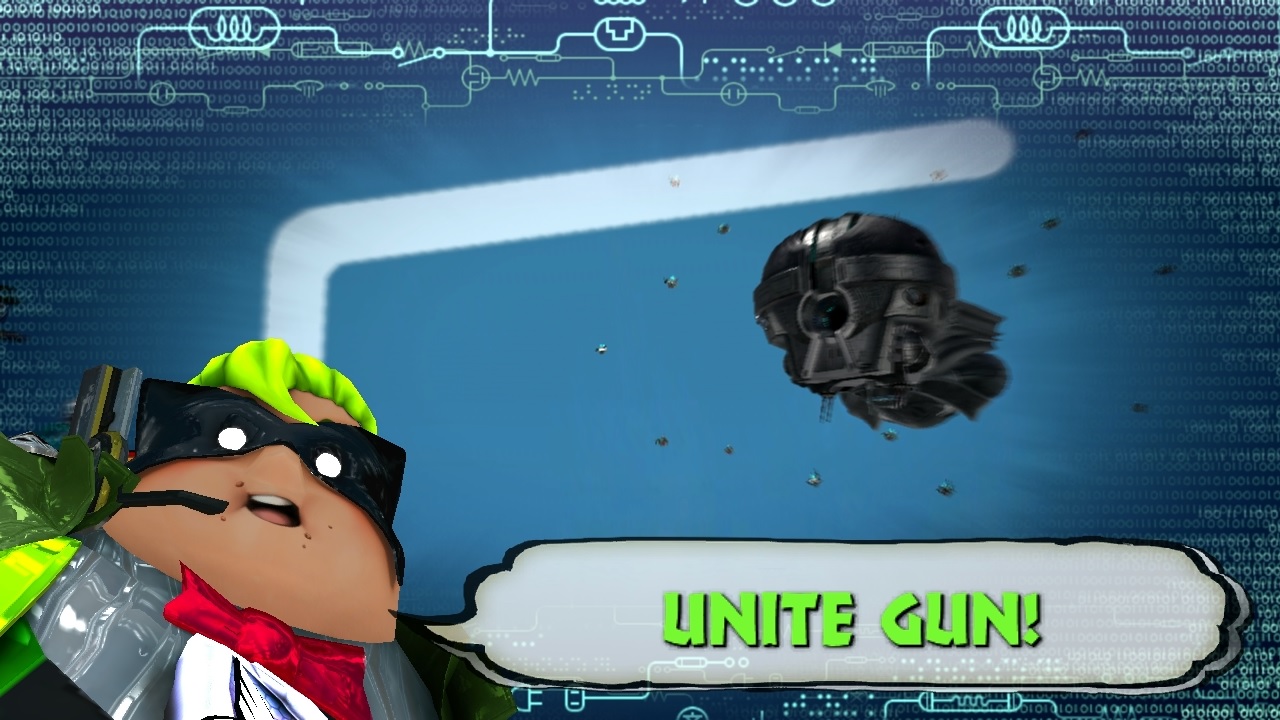 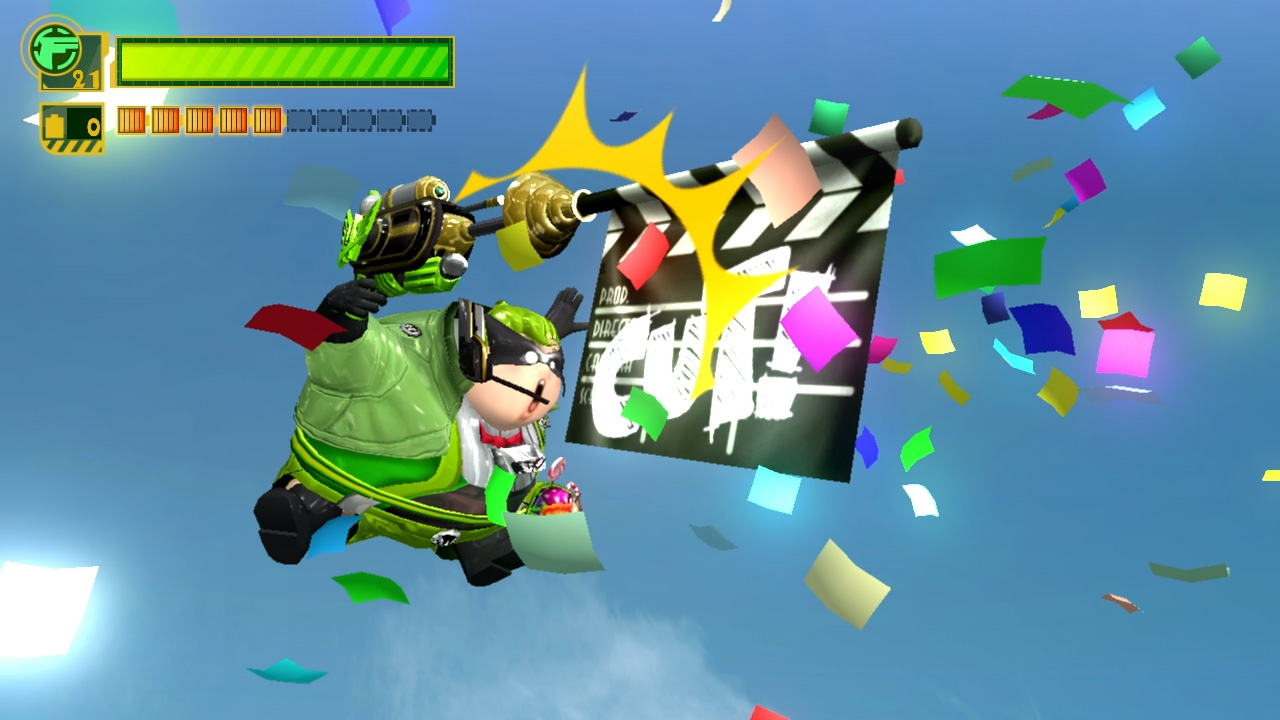 They aren’t terribly hard to pull off and you get a relatively good amount of time as well, so there probably aren’t a whole lot of players who keep failing over and over again.
Which is a bit of a pity, since we’ve actually gone to great lengths to create entertaining failure scenes. If you don’t feel comfortable making your poor heroes fail on purpose, just save the world once… and then make everything go wrong on a second playthrough! You might see some unexpected sides to the characters you’ve come to know and love. 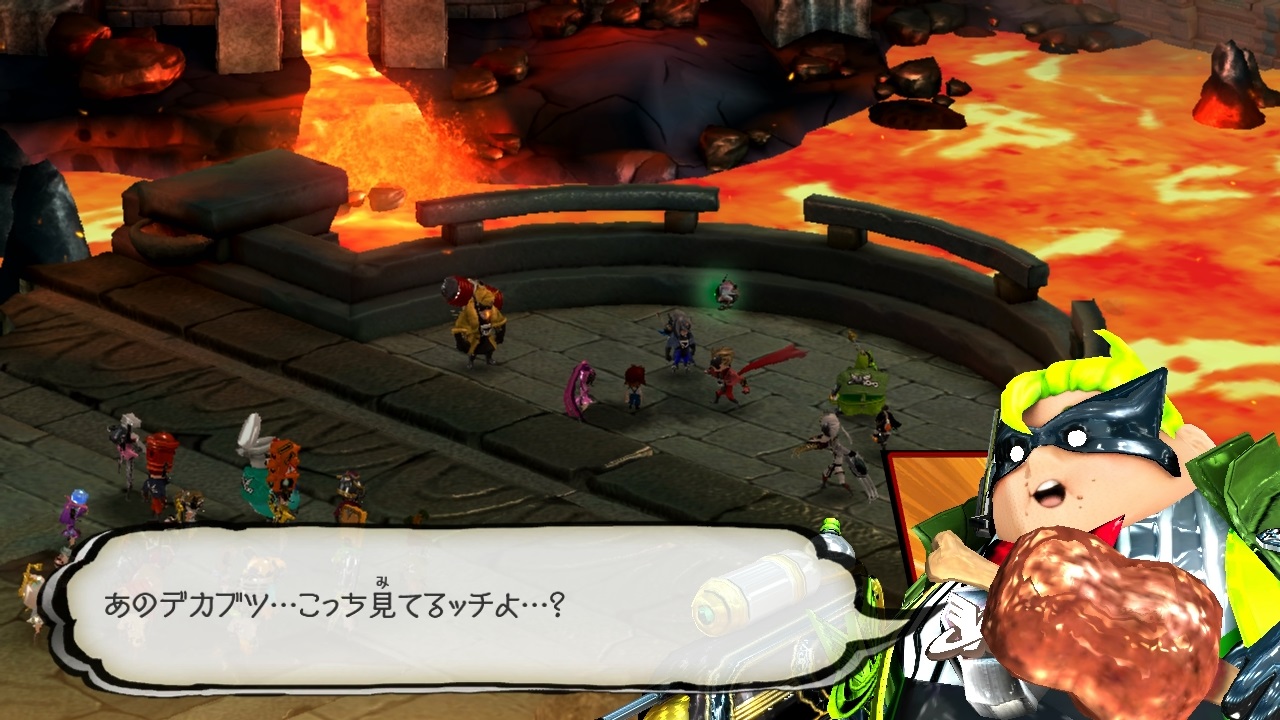 – The Secret of the Sound Gallery
By now, I’m sure you’re all completely smitten with that wondrous theme song “The Won-Stoppable Wonderful 100.”
You can listen to this song until tiny heroes start falling out of your ears in the Sound Gallery that is unlocked after completing the game, but did you know there’s a way of removing the vocals and listening to the instrumental version? 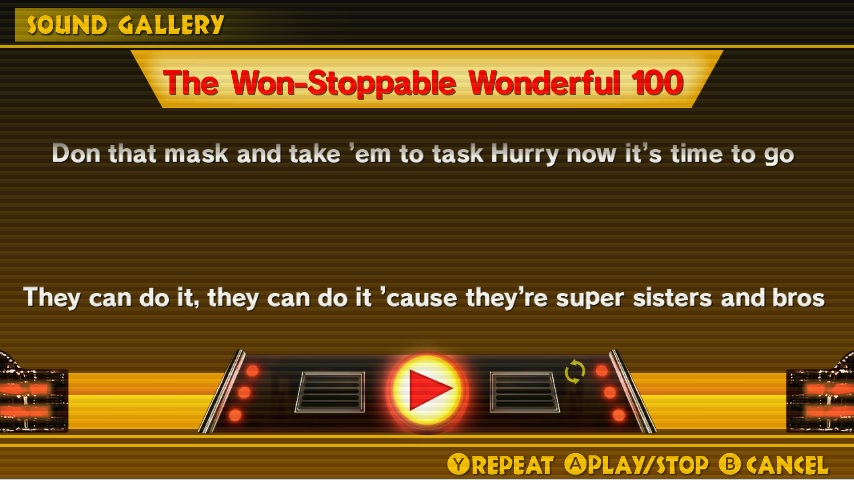 To do so, you only have to press the right stick button while the song is playing. Press it once to have the vocals fade out. Press it a second time to have them fade in again.
This works for both the Japanese and the English version of the song. You can also check the lyrics on the GamePad screen, so there’s nothing stopping you from singing along at the top of your voice (except for your neighbors perhaps).

Also, and this isn’t mentioned on the screen, you can pause/unpause the music by pressing the X button at any point during the track. This is perfect for those moments when you’re enjoying a long track and you get a phone call or a sudden craving for donuts.

And that’s it for today, boys and girls!
Across two separate posts, I’ve introduced some of the tips & tricks I could think of off the top of my head, but I have the feeling that there are still a lot of hidden goodies in the game that I forgot to mention… In fact, I’m quite sure about it.

At the risk of sounding like a strategy guide from the 80s: “You’ll just have to find out for yourself!”

If you’ve finished the game many times already, if you’re right in the middle the story, or even if you’re about to plunge into the battle with GEATHJERK for the first time, I hope this blog post has managed to tickle your desire for adventure a bit.