The Wonderful 101 has been out in Japan and Europe for a while now and we’ve received a lot of positive feedback from our fans. Thanks, everyone!
And now the game’s finally out in the US too! Yay! We’re looking forward to hearing what our American friends think of the game as well.
And even though it’s been more than 3 weeks since The Wonderful 101 first saw the light of day, we feel pretty confident in saying that probably extremely few people have been able to uncover every single secret so far.
Now that the game is out everywhere, there’s surely going to be an arms race over who can 100% the game first, so you might want to prepare a sleeping bag and a bunch of midnight snacks, because this game boasts more content than you can shake a Wonder-Liner at! (seriously)

For those of you who are just aching to explore every nook and cranny of The Wonderful 101, I have a special blog post today that introduces a lot of tips & tricks that cannot be found in previous blog posts or in the electronic manual.

The list starts off with all of the tips that are most useful when trying to get the most out of the experience, so even those who think they’ve already dominated the game can jump right in and I’m sure you’ll find something that’ll make you want to go back and see if you can improve your performance. So let’s get going!

– The High-Speed Wonder-Liner
Good news for people who like to use the right stick to control the Wonder-Liner! 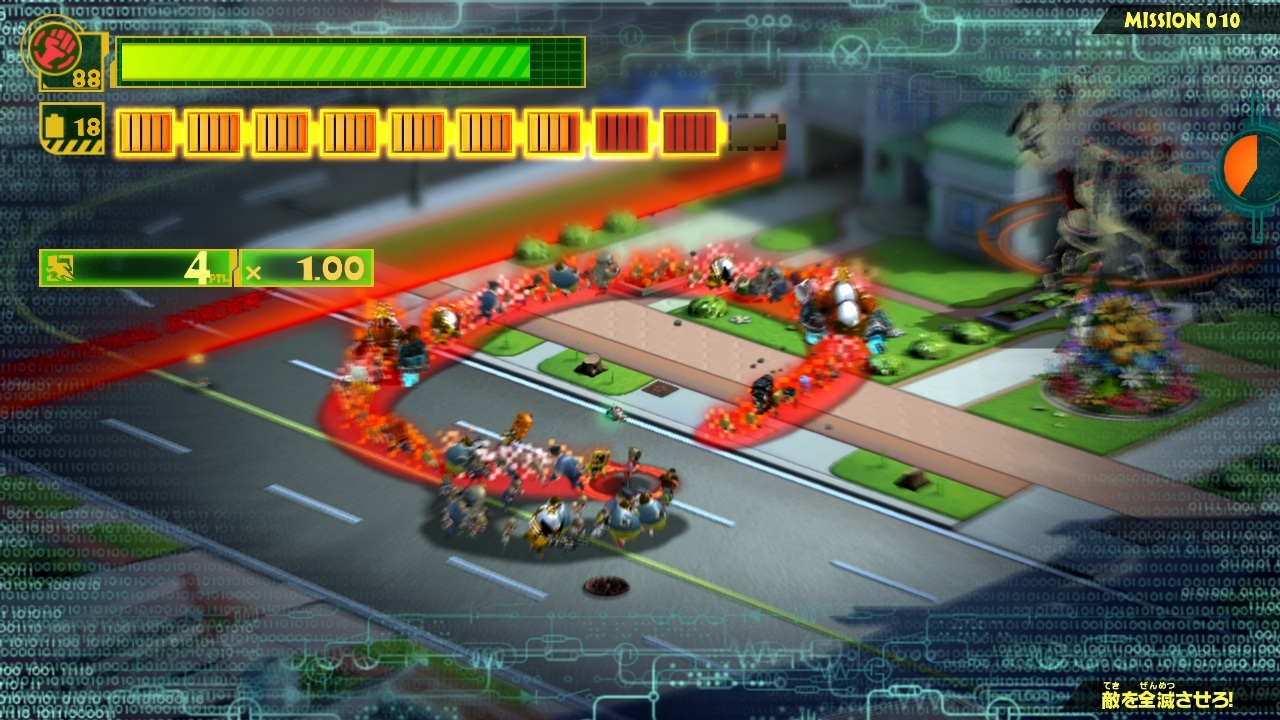 If you hold down the L button while pushing the right stick, the Wonder-Liner will move slightly faster than normal.
This is a small trick that you can use right from the start of the game, and if you buy the Speed Liner skill, the liner will move even faster! This might be a little bit too much for novice players, but more experienced players may find an entirely new dimension of gameplay here.

– Make Clever Use of the Dash!
Dashing is very useful when moving through stages and dodging attacks during battle, so you’ll be doing it a lot. I’m sure that a lot of you are probably holding down the Y button while dashing, so you might be surprised to find out that the leader will actually keep on running even if you immediately let go of the Y button after pushing it. 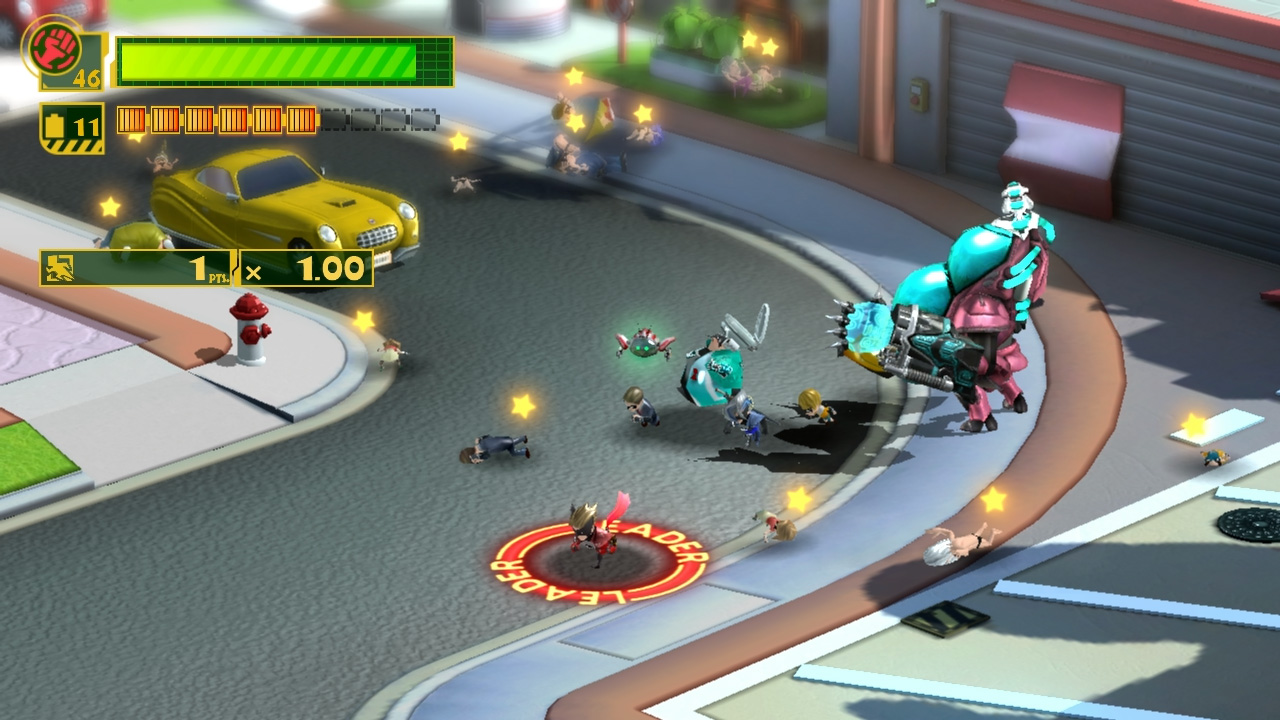 You’ll keep dashing even after letting go of the Y button.

Of course there’s nothing wrong with holding down the Y button the whole time, but in some occasions this might cause some inconvenience. 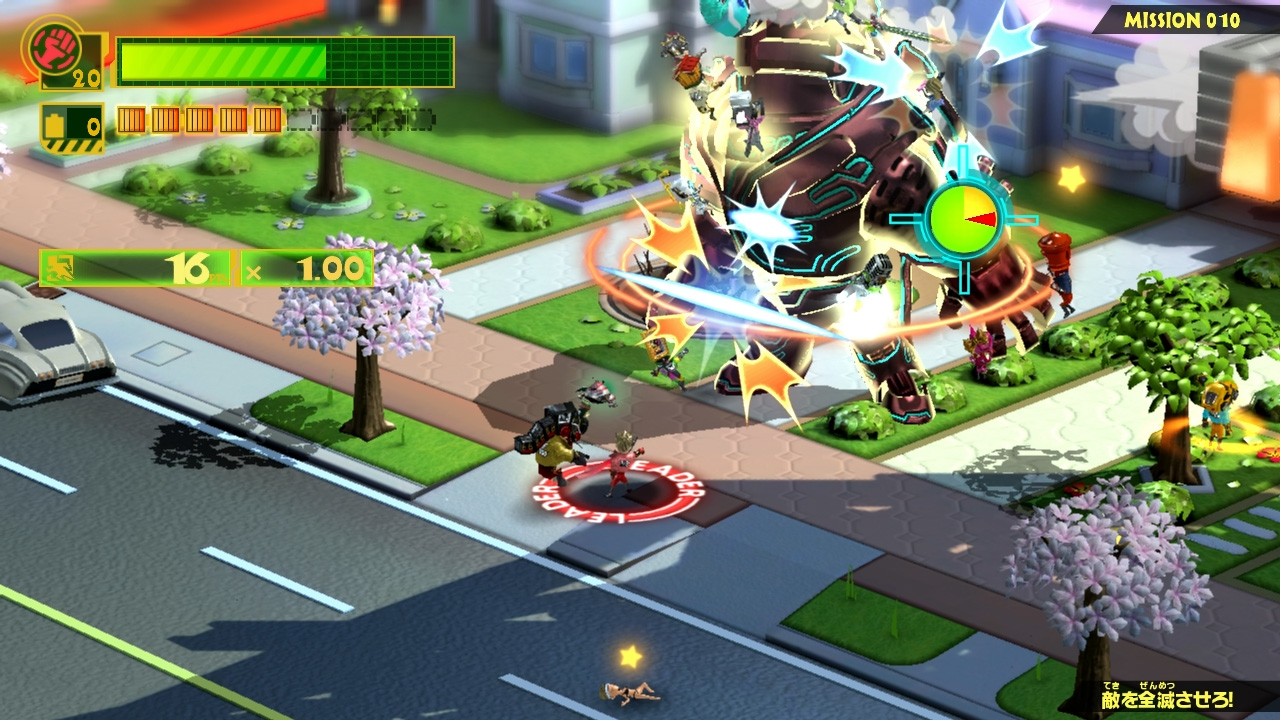 If you want to have the leader dash without interrupting the Climb Attack, just quickly tap the Y button while moving and immediately let go again. 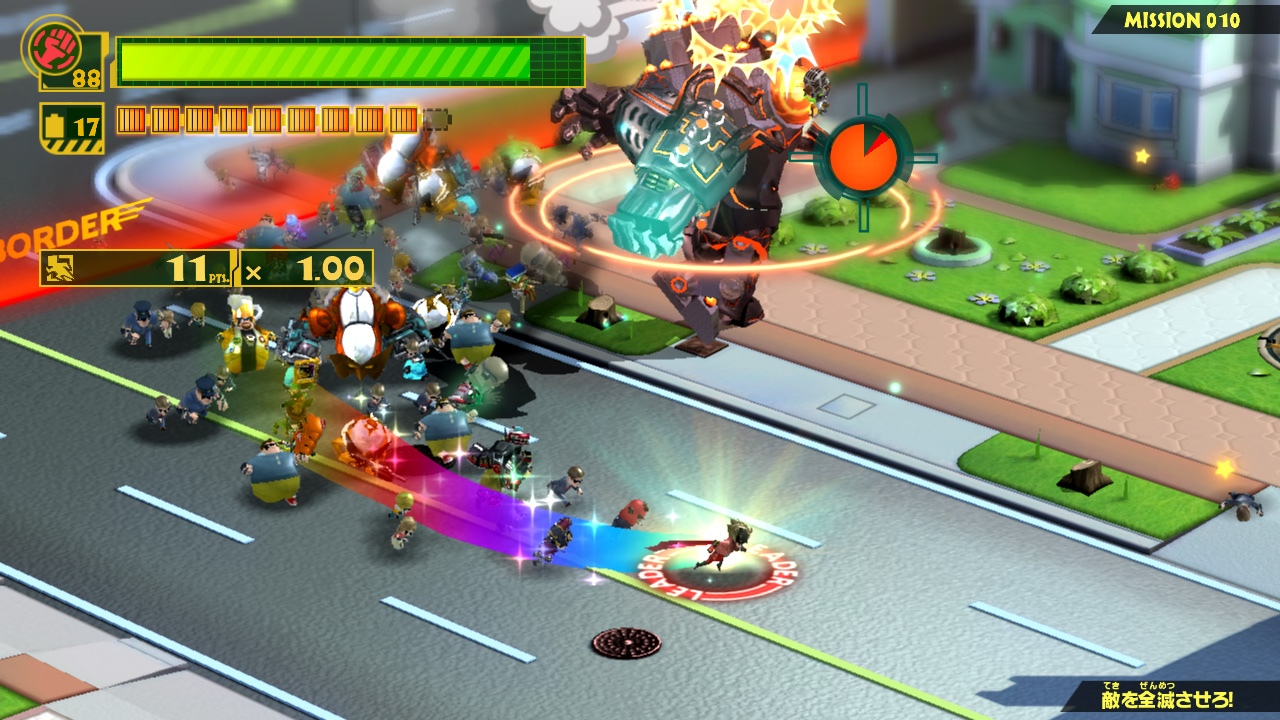 “Alright, guys, it’s up to you now!” Dashing while sending out buddies for a Climb Attack

If you use this method to dash, only the team members who have nothing on their hands at that moment will follow the leader.
However, the group will not be as tightly packed together as when you hold down the Y button, so all members apart from the leader might be more susceptible to enemy attacks. 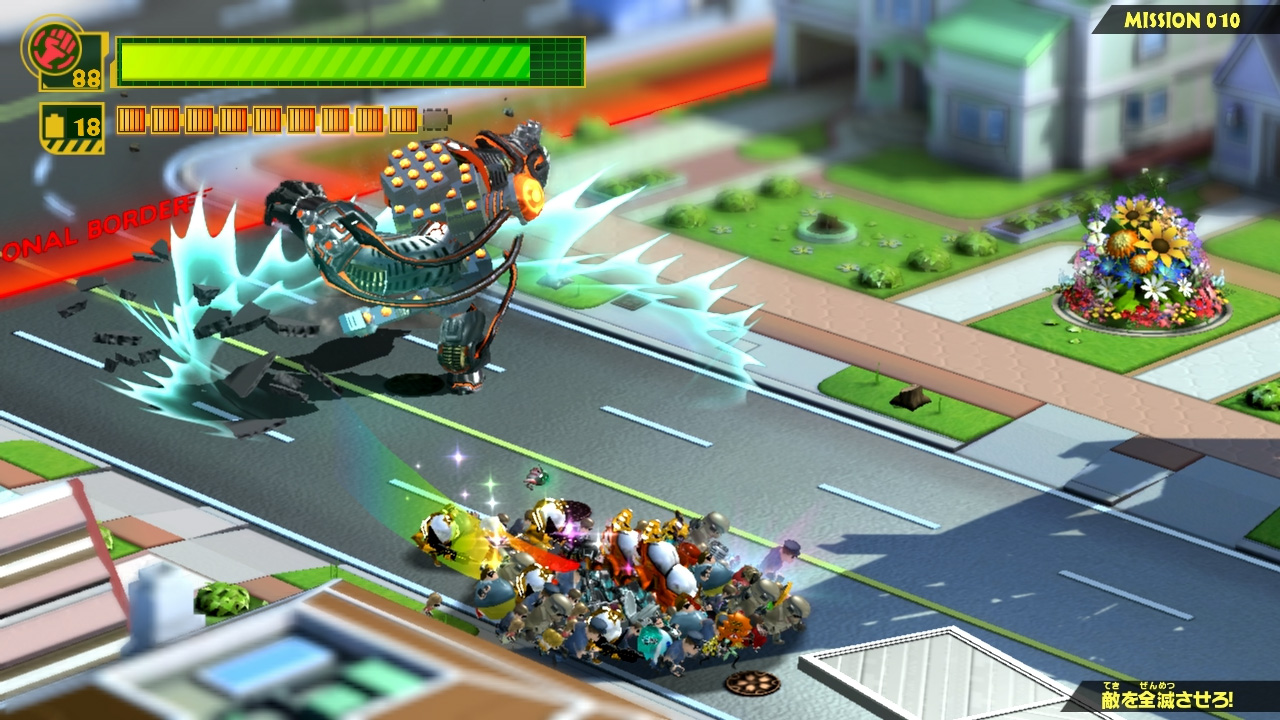 If you hold down the Y button, the party will dash in a more compact formation

On the other hand, if you hold down the Y button, all team members will huddle up around the leader, meaning they are not as likely to be hit by enemy attacks. Even better, as long as you hold down the Y button, your team members will actually dodge enemy attacks automatically! Do take note that they will stop attacking automatically at this point though.
This means you’ll only have to worry about controlling the leader and making sure he or she does not get hit. It does have the disadvantage of Climb Attacks being interrupted, but this movement method is much more suited for avoiding attacks.

The choice is yours: do you let go of the Y button instantly to focus on Climb Attacks, or do you hold down the button to play more evasively? The way you use the dashing function actually adds a new layer to the combat!

– Locking On & High-Speed Homing
As you know, Team Attacks let you hurl your team members at enemies in order to climb them. But this offensive strategy has another function outside of setting up a Climb Attack. 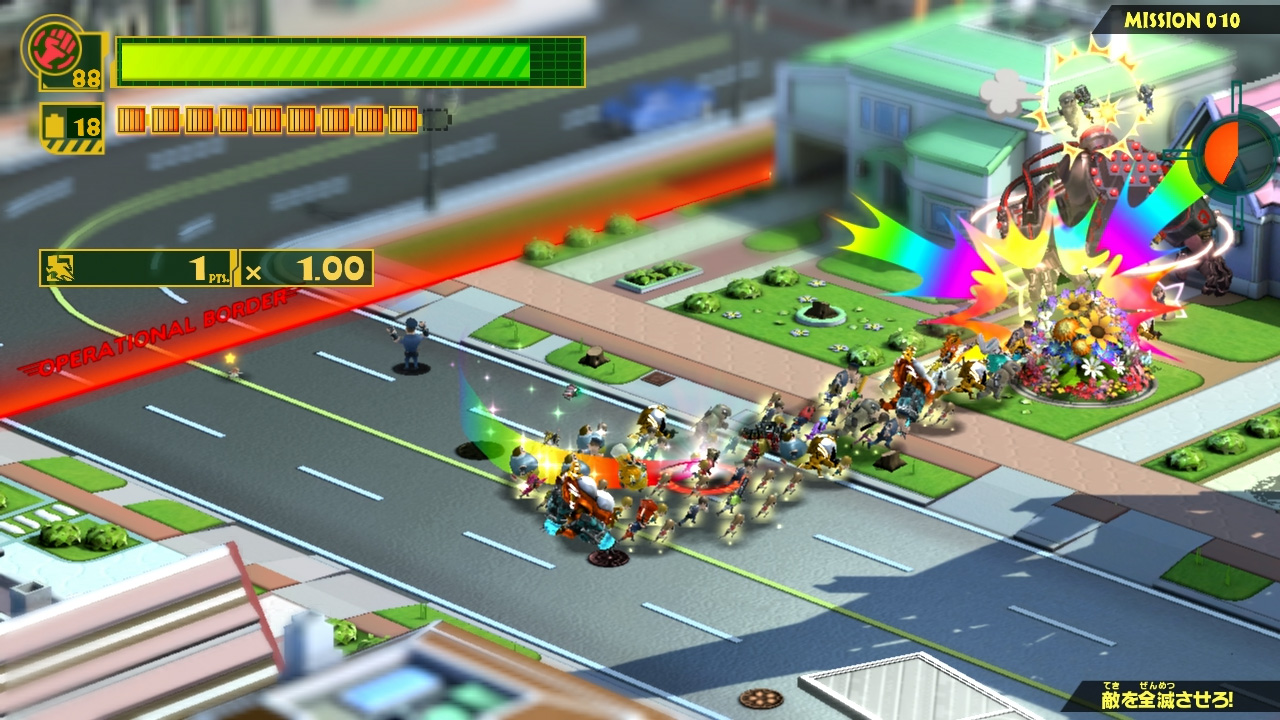 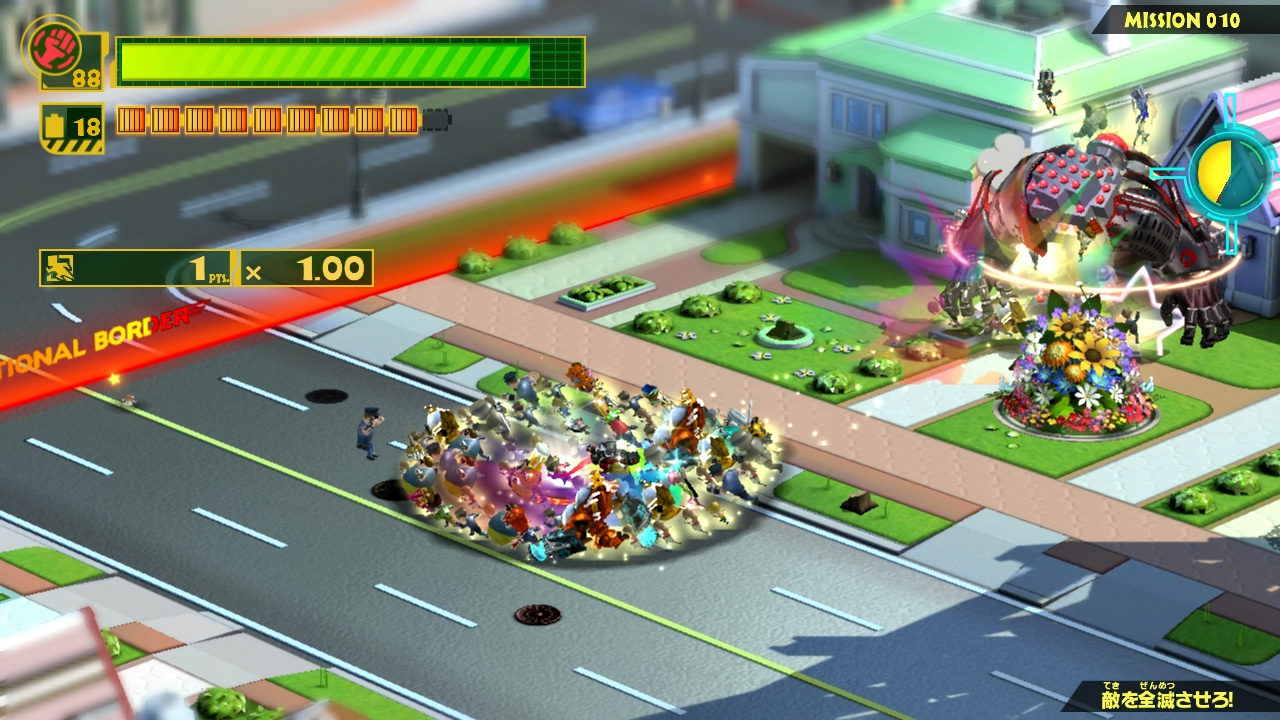 When a Team Attack hits an enemy, a bright ring appears.
This ring indicates that you are “locking on” to the enemy and that, if you whip out a Unite Attack, it will automatically home in towards enemy. 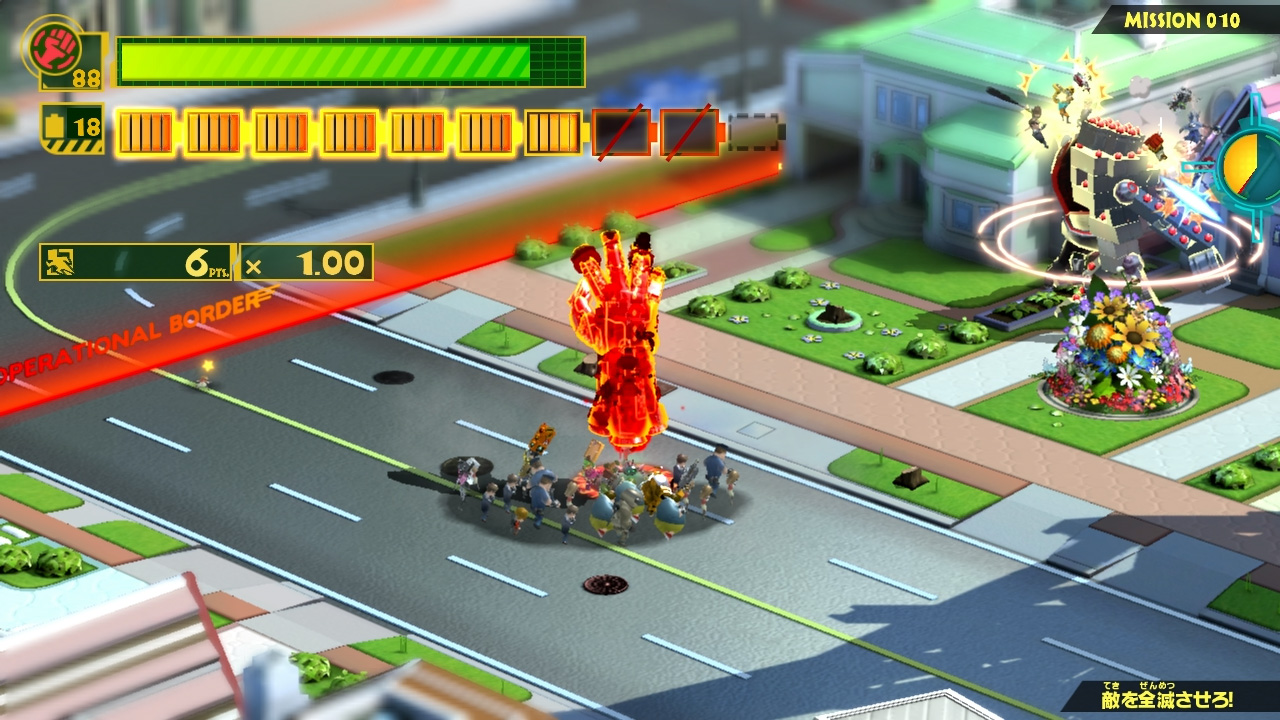 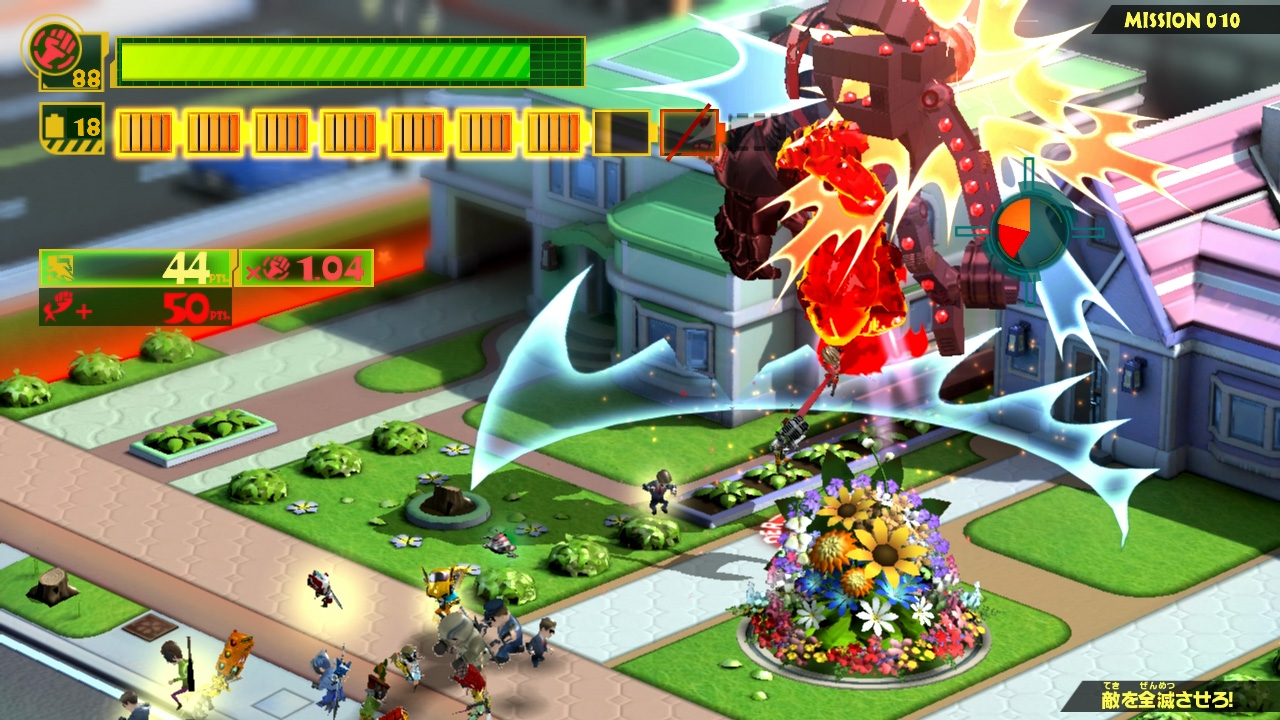 Even skills like Wonderful Rising can hit from a distance.

Pick off the enemy from a distance with long-range Unite Morphs, or use a melee-oriented Unite Morph to instantly move in for a beating.
Even if the enemies are not within reach, it’s possible to defeat one after another at a very high pace without having to walk around, as long as you perform a Team Attack first and then dish out a Unite Attack. This should be a great help in reducing your completion time.
This high-speed homing effect also works on airborne enemies, so if you make good use of it, you might just be able to rack up some crazy air combos…?

– The Right Stick Controls the Cave Camera
There are certain narrow places in the game, such as warehouses and caves, where the action switches to the GamePad when you enter. These places use the gyro sensor of the Wii U GamePad, allowing the player to look around the area by moving the pad around. 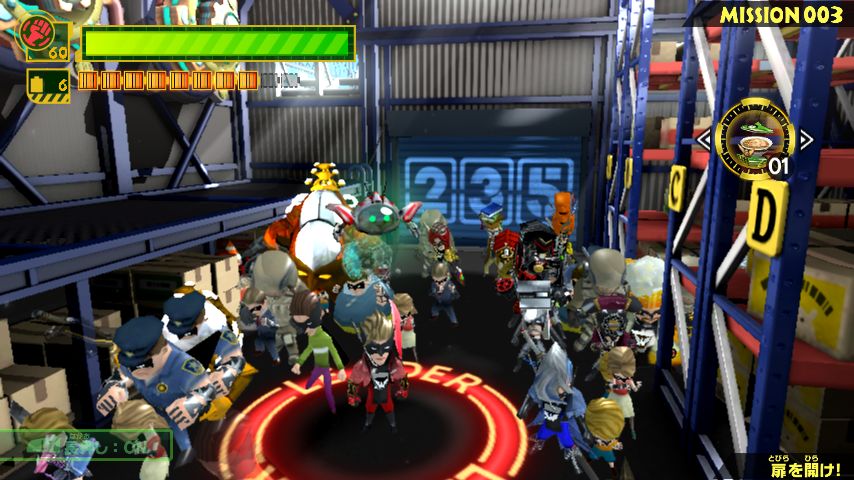 However, there are probably a lot of you who play the game while lying down or while maintaining some other state of relaxation that could make it difficult to swing the GamePad around too much. Or indeed, there may be some of you who cannot be bothered with all this new-fangled gyro mumbo jumbo in the first place.
So to the lazier/get-off-my-lawn type of gamer, I would like to say the following: try holding down the R button once the action switches to the GamePad. This will allow you to switch off the gyro sensor camera control temporarily.

Even in this state, the camera automatically adjusts itself to the direction the characters are moving in, so you don’t have to worry too much about it, but it is also possible to use the right stick to move the camera horizontally and vertically, so you should try this out as well. (If you want to draw the Wonder-Liner inside a cave, don’t forget to let go of the R button!)

– The Secret to Taunting
Has it ever happened to you that the leader of the team shouted out something like “We WILL use force!” or “Let’s rock, dudes and dudettes!” out of nowhere?
The existence of the “Taunt” has already been hinted at, but the time has come to reveal all. 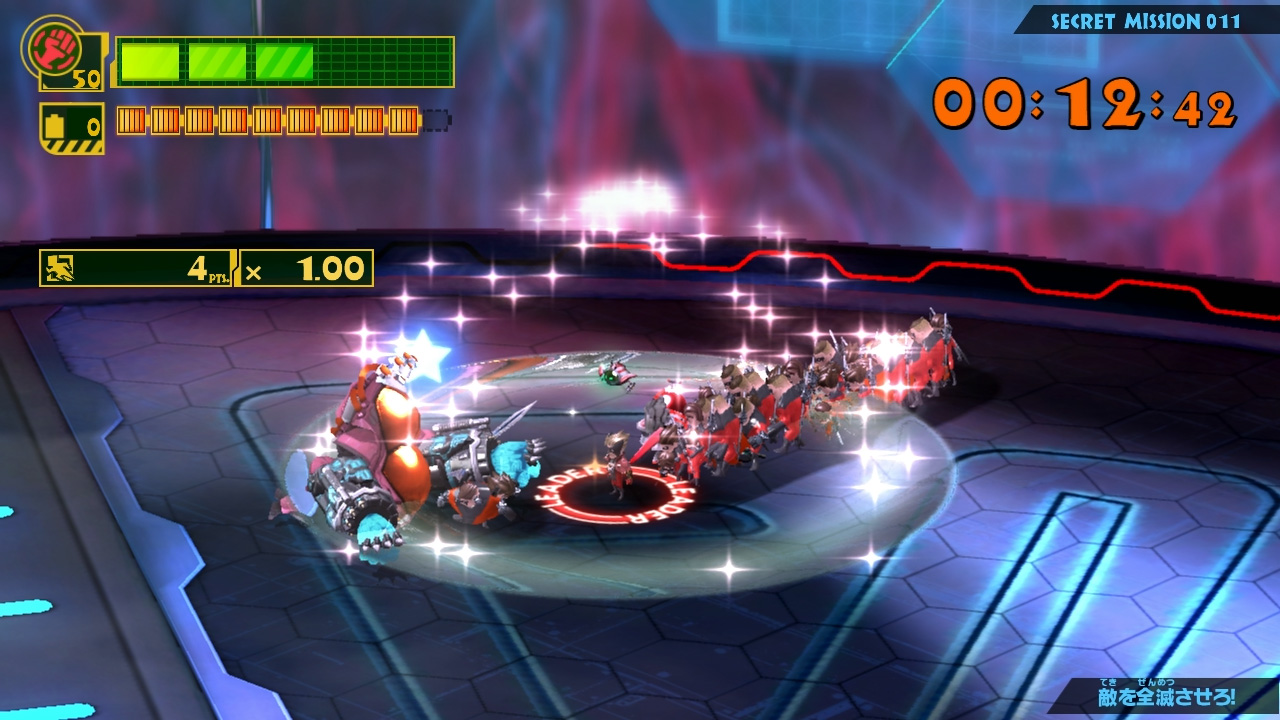 Successfully pulling off a taunt creates a sparkly effect around the leader. Fabulous!

You can perform a taunt by standing still near an enemy during battle, facing the enemy, and holding down the left stick button or holding down the X button and A button simultaneously.
Be careful though, because jumping, dashing or attacking right after taunting will cause the effect to be canceled. 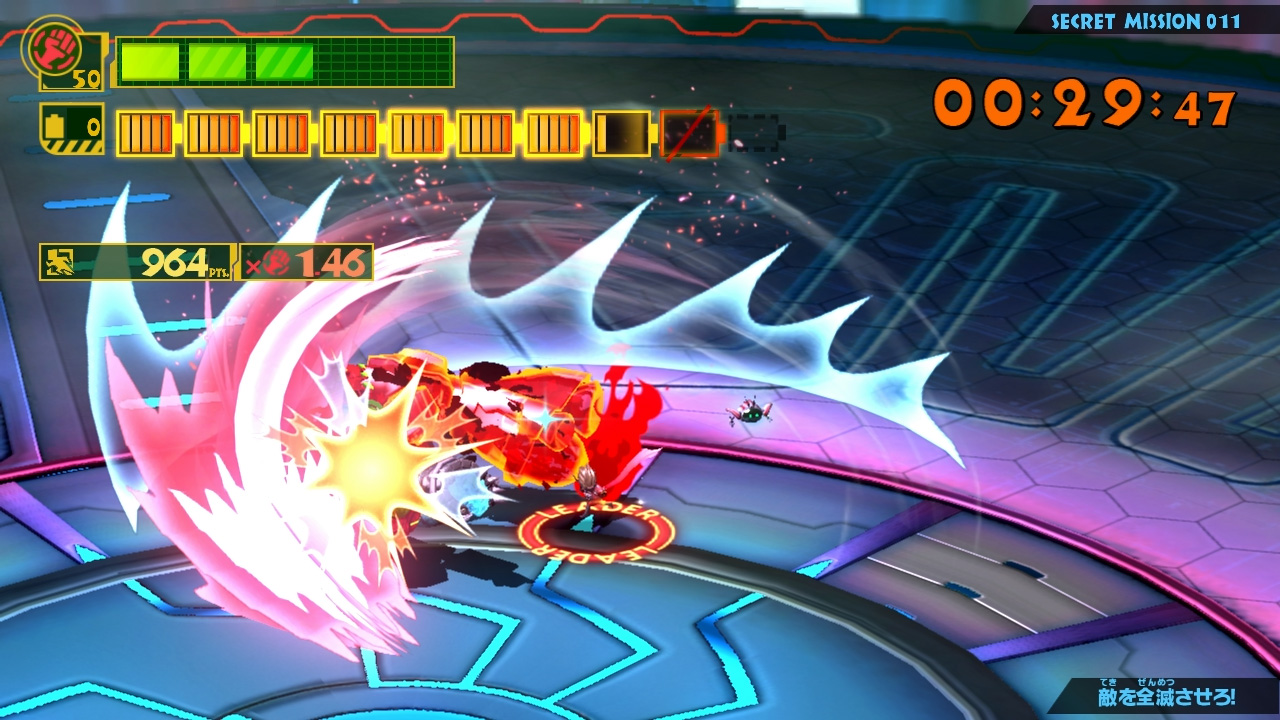 Nothing like a one-liner to get people riled up!

Taunting has 2 effects:
– Your heroes’ attack power will go up.
Be aware that performing a taunt will not actually enrage the enemy.
The point is more to show off as a hero and to raise your party’s morale. 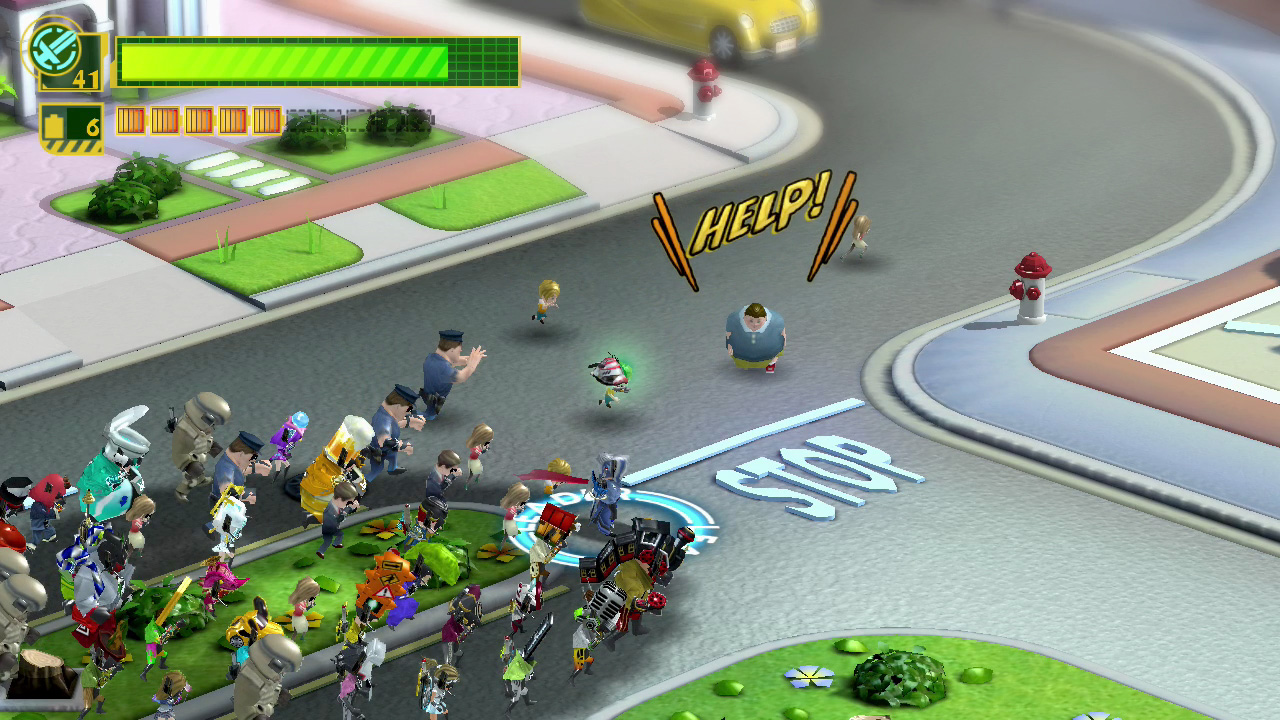 It helps to know then, that when a Gedie Dough-Goo is staggering, you can peel off several parts at once by creating as large a Unite Whip as possible.
If the Unite Whip is large enough, you can take off a huge chunk of the Gedie Dough-Goo’s armor, and it’s even possible to completely strip him naked in only two staggers. 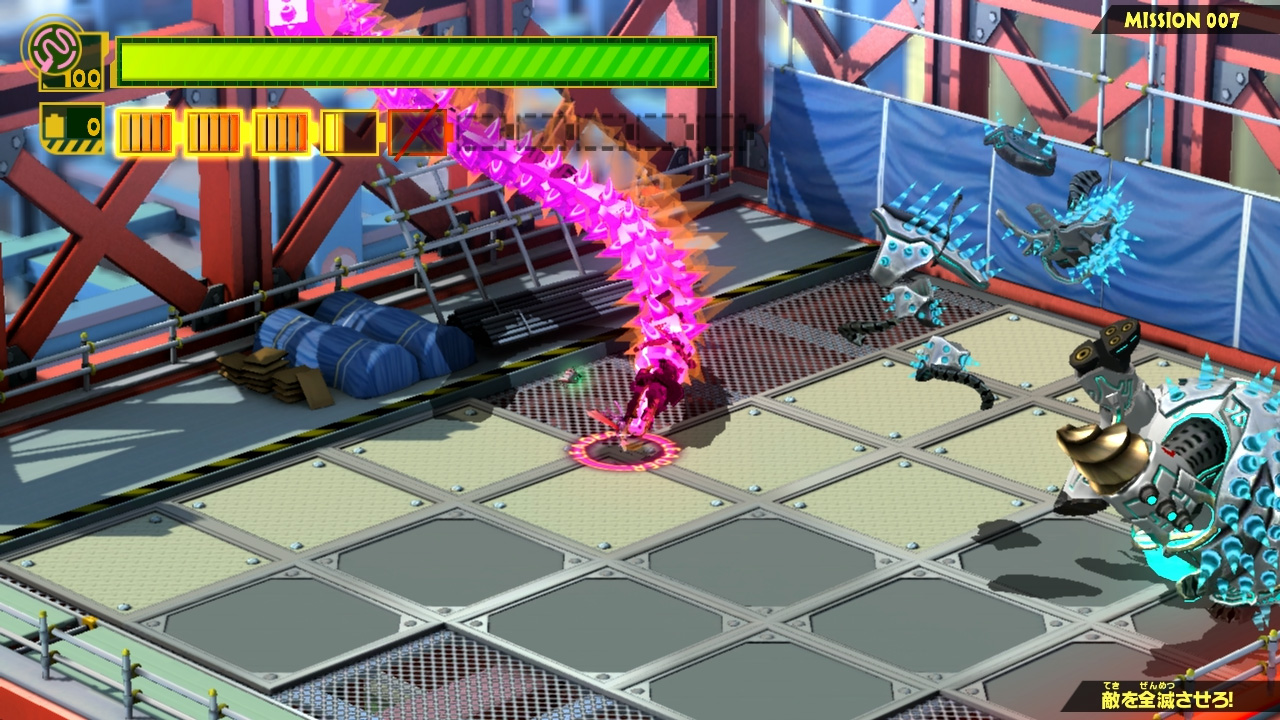 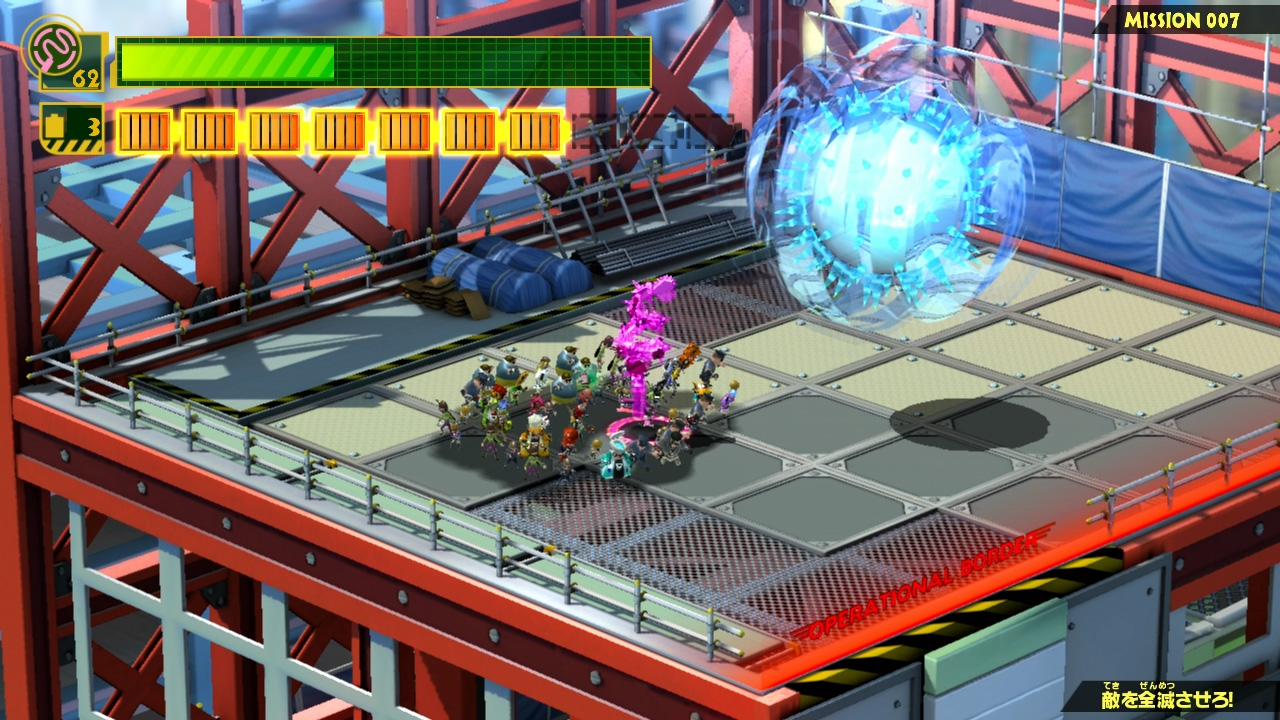 This looks like a tight situation, but it’s actually a blessing in disguise. WHIP IT!

Get a nice, large party together and witness the devastating force of Unite Whip! If you’re not very good at drawing large shapes in the heat of battle, you should purchase the Unite Charge Custom Block.

– The Mysterious Mystery Circles
When you defeat an enemy, they very occasionally drop GEATHJERK weaponry.
They all have a limited number of uses, but they more than make up for it in terms of devastating force. 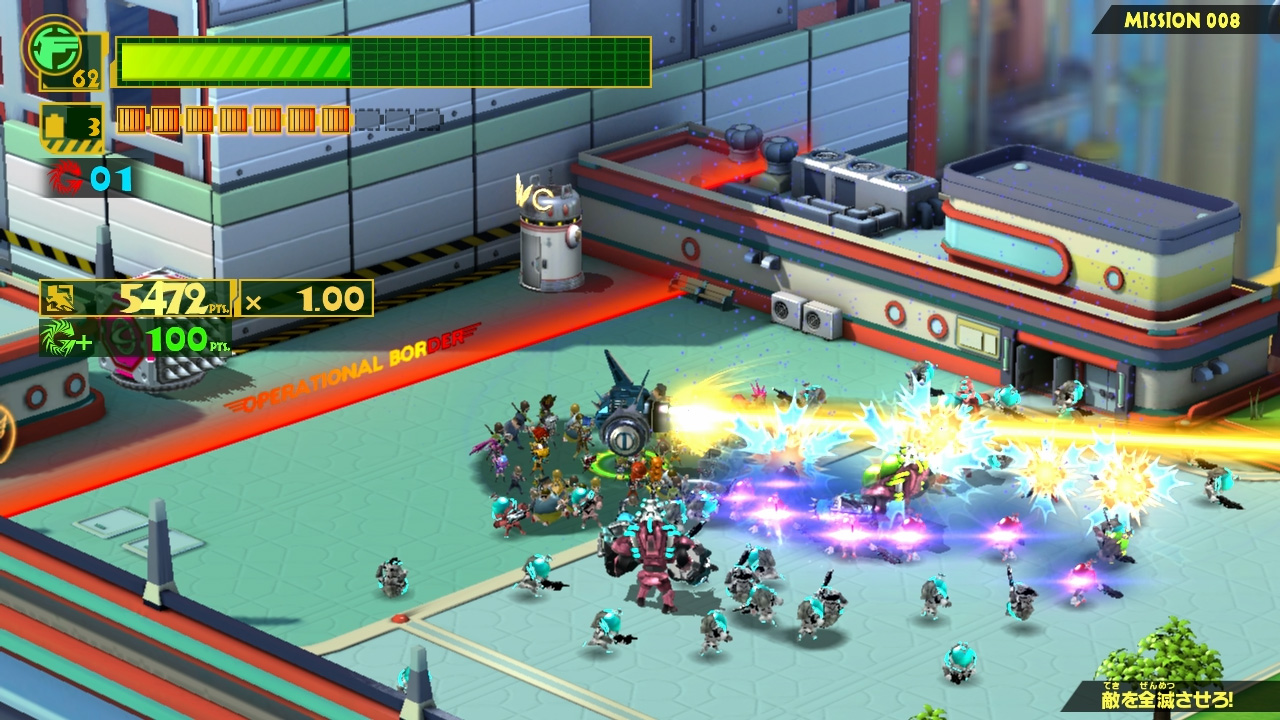 These weapons can be obtained, if you’re lucky. But there might just be a way of stealing them purposely… 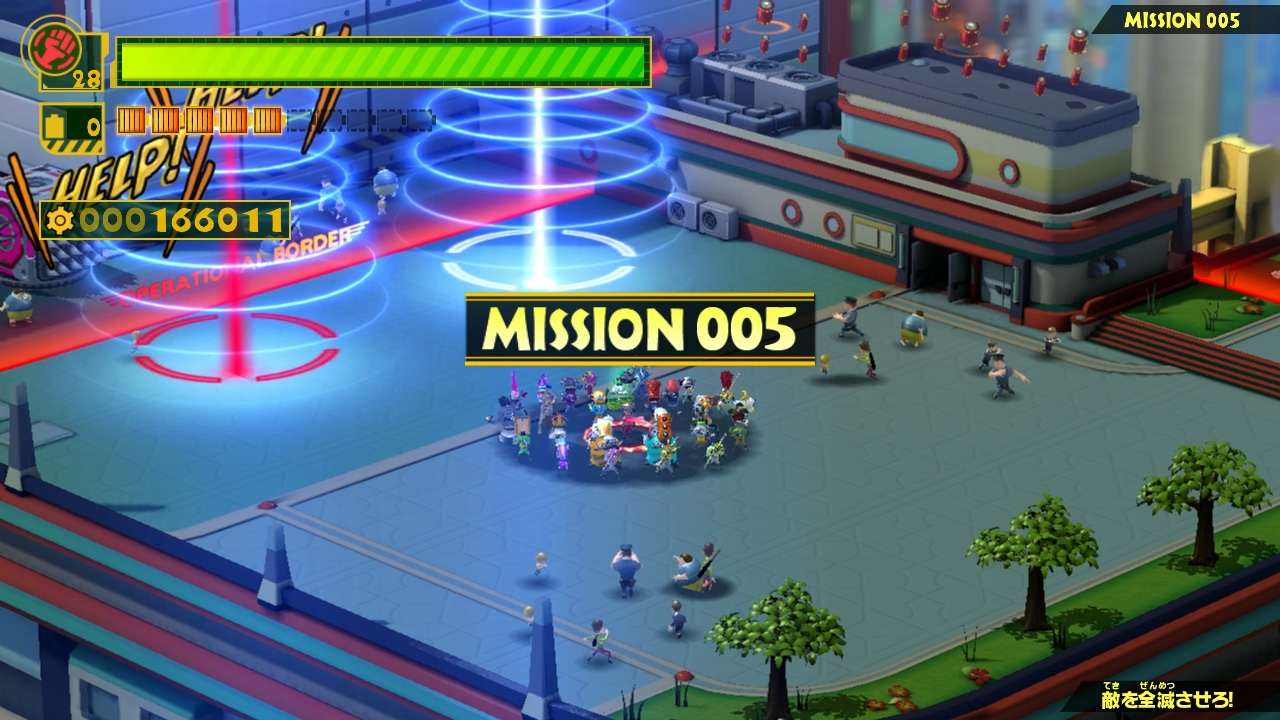 The hint lies in the moment the enemies appear.
Pay close attention. You might discover some kind of pattern. 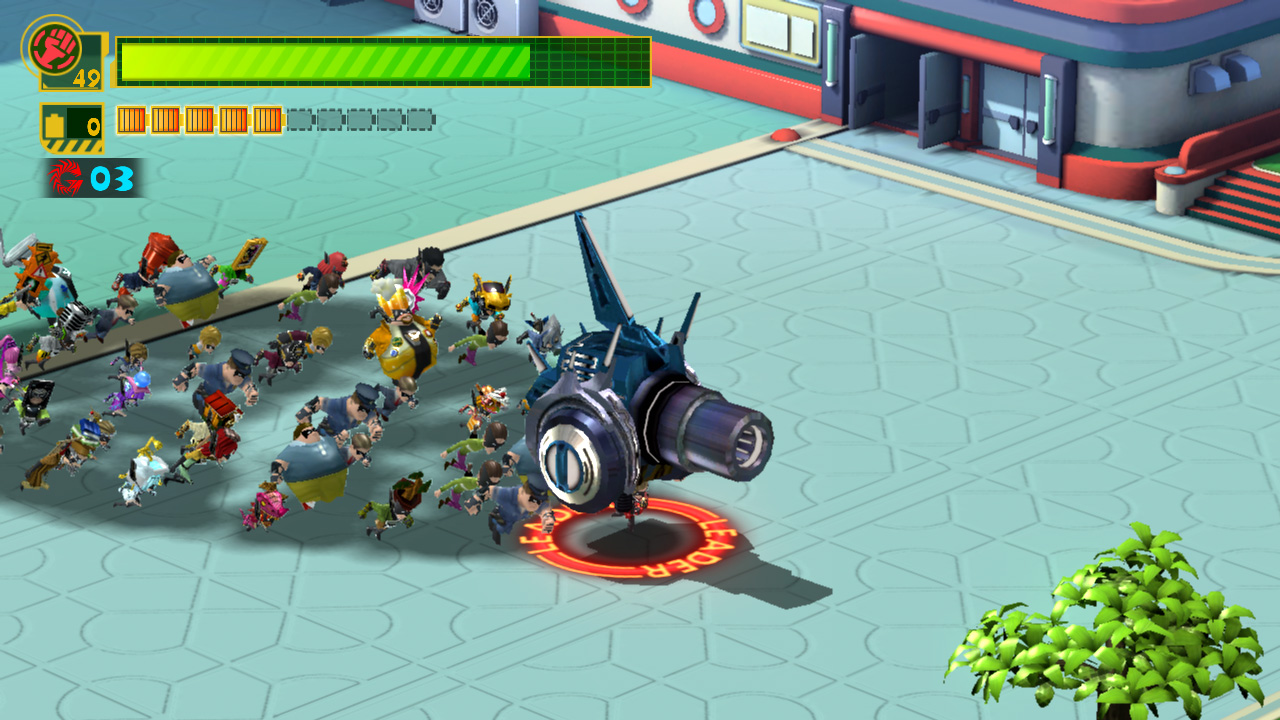 While carrying an enemy weapon, its weight will greatly decrease your movement speed. If this is more trouble than it’s worth, quickly shake the left stick left and right to drop the weapon on the spot.

“No way, I wanna use this on the next enemy that appears!” you might say. In that case you should use Unite Ball, which lets you move around at high speed while keeping the weapon in your possession. 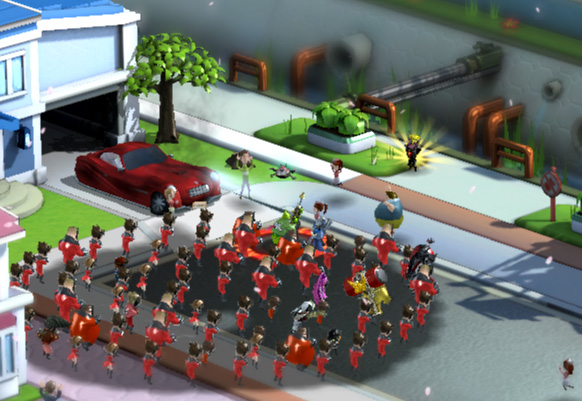 They only appear during the first mission of each stage.
If you have an idea of what these “certain conditions” may be, try scouting around the stage carefully.

But I could sit here telling you about the plethora of secrets hidden away in The Wonderful 101 until the Wonder-Cows come home (UNITE MOO!), so I’ll stop here for today, since this post is getting long enough as it is.

The fun doesn’t stop here. There are still many tips & tricks I haven’t told you about!
So instead of just throwing them all your way at once, I’ve decided to split them into 2 separate posts.

So the list continues next time, with many more bits of knowledge, ranging from the “this is cool to know!” to the “what the heck am I supposed to do with that!?”