Hello, nice to see you again. My name is Mari Shimazaki and I’m a freelance designer. 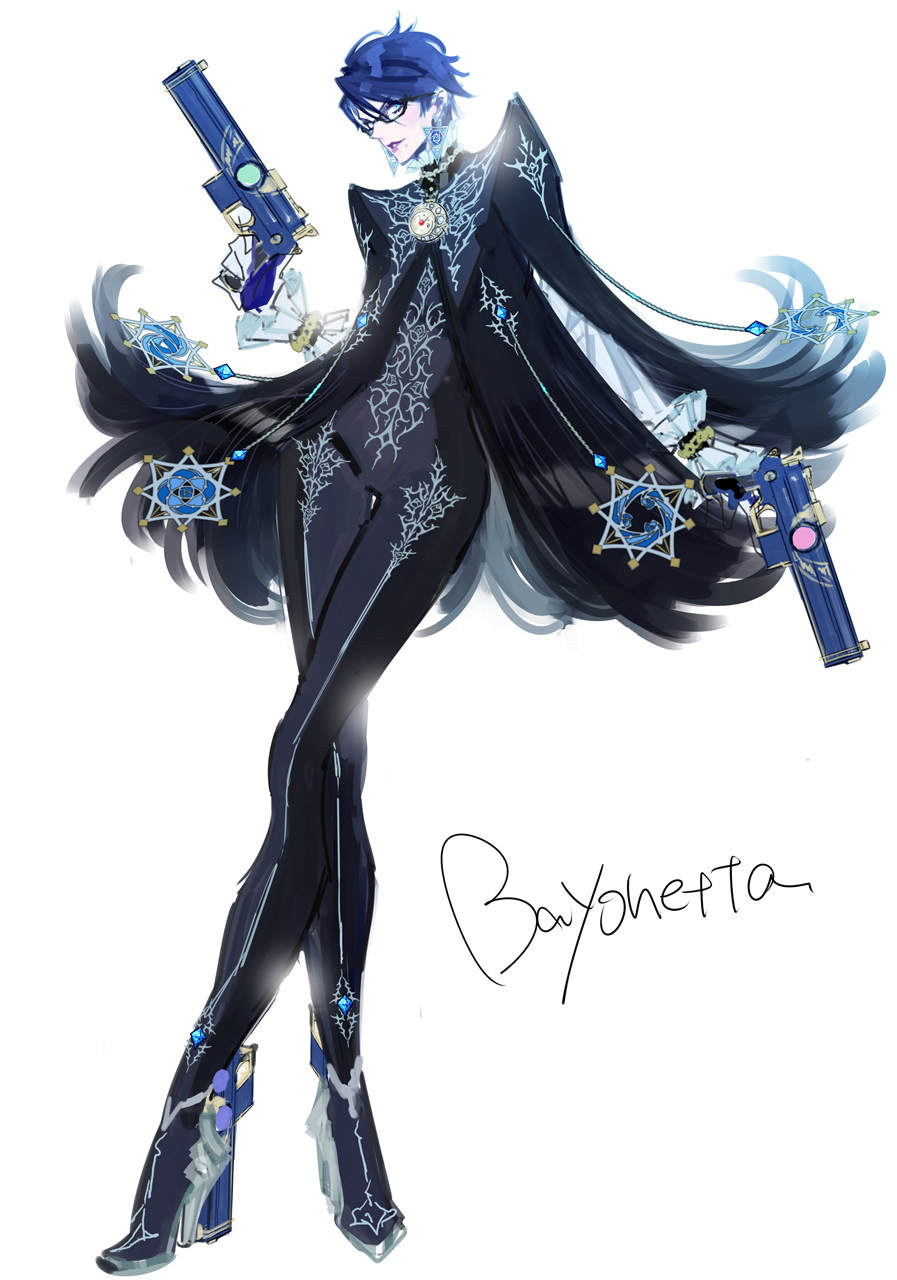 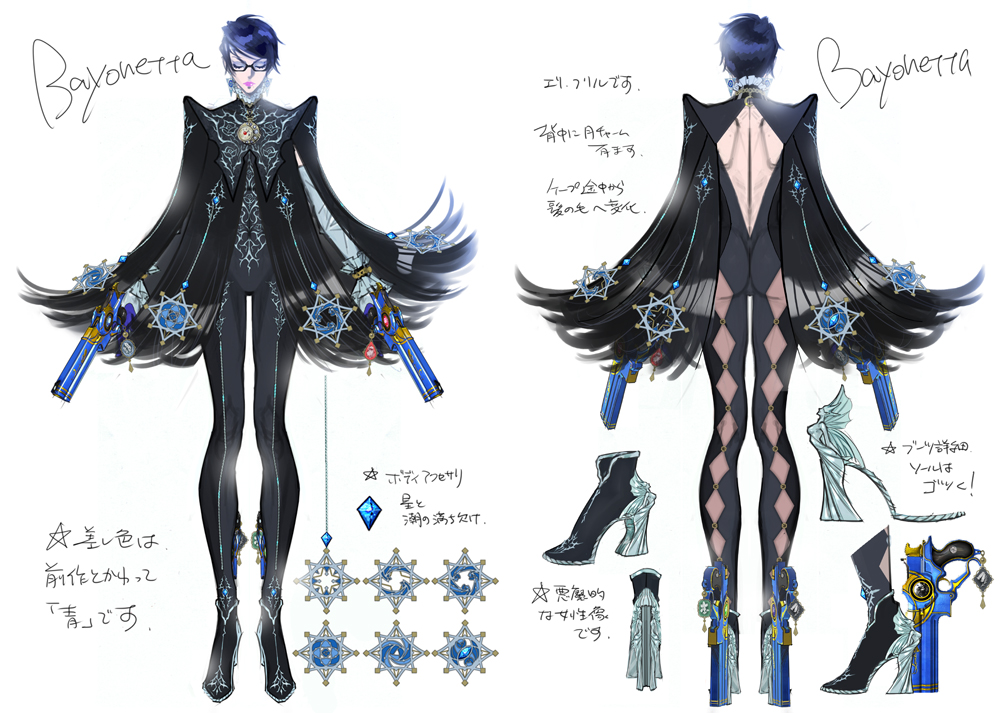 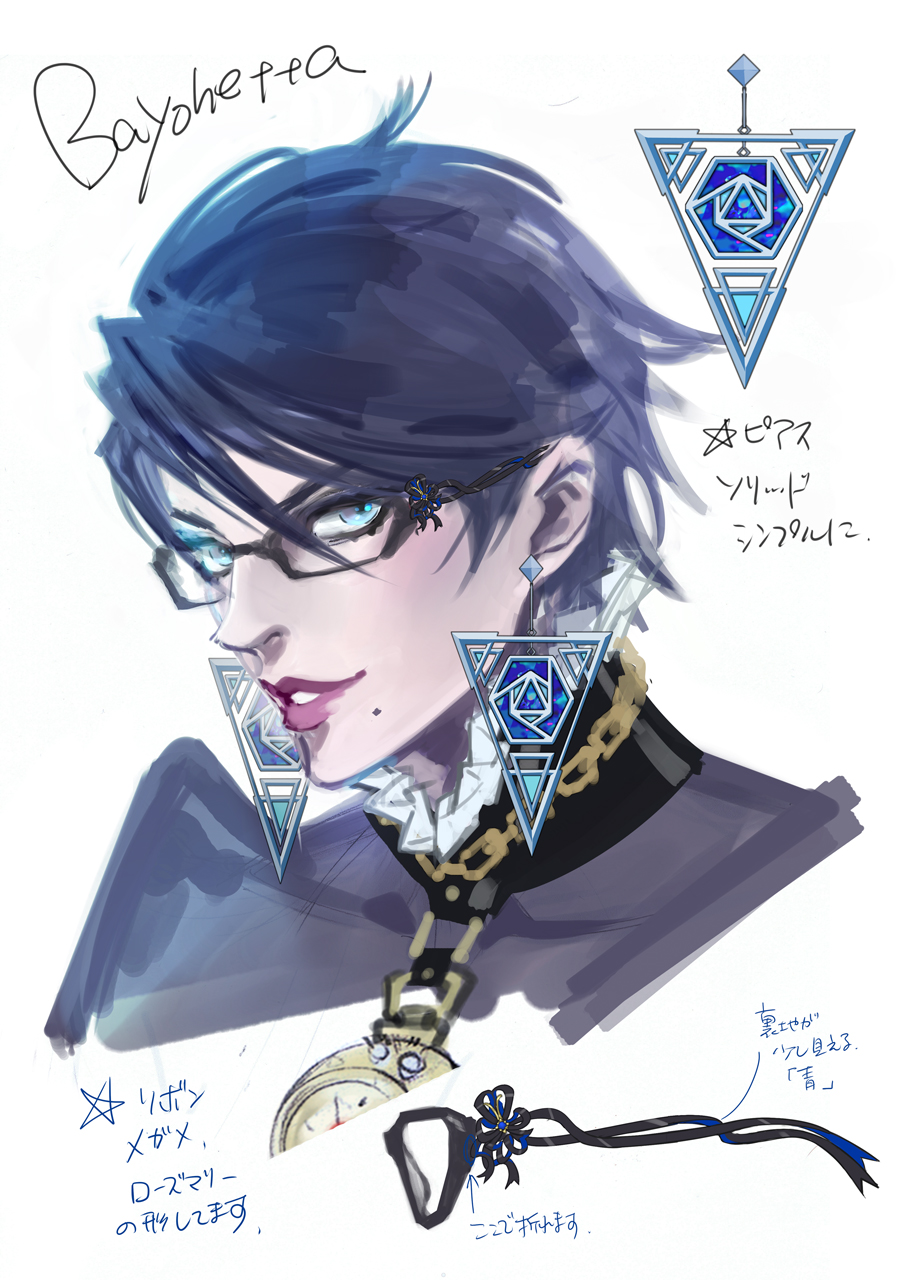 First, let’s talk about Bayonetta, the “modern witch”, and this game’s main character. Those who played the previous title are likely to notice that her trademark hairstyle has been given a complete makeover. After talking with Hashimoto and Kamiya, the three of us came to the conclusion Bayonetta’s not the kind of girl who’d show up with the same hairstyle for her sequel. A girl can be known to change her hairstyle depending on her mood, so I guess Bayonetta was in the mood for something short. Still, knowing her, there’s no telling when she’ll decide to change it again.

She’s still wearing black, and I think her shorter hair gives her a generally more masculine look. While her design in the last game focused on curves, this time we see more straight lines. All of her accessories follow this, except her glasses, which I gave a slightly softer design.

There was some debate about where to show skin. Once we decided her new cape would come around to the front, we closed the front of her suit off to let the cape stand out. In exchange, we opened up a lot in back.

As water is a big theme of the second game, Hashimoto requested to make her key color blue. This turned out to be a lot more difficult than I thought it would be.

Blue doesn’t have the sharp quality of red, her previous key color. As it’s relatively easy on the eyes, making it stand out among all the other textures and colors in the game is a huge headache. On top of that, I had to balance it with black and silver (these colors were also decided right off the bat), which also is not easy. Ever since we decided Bayonetta should wear a sleak, black outfit, it’s always been a nightmare trying to have her properly stand out. 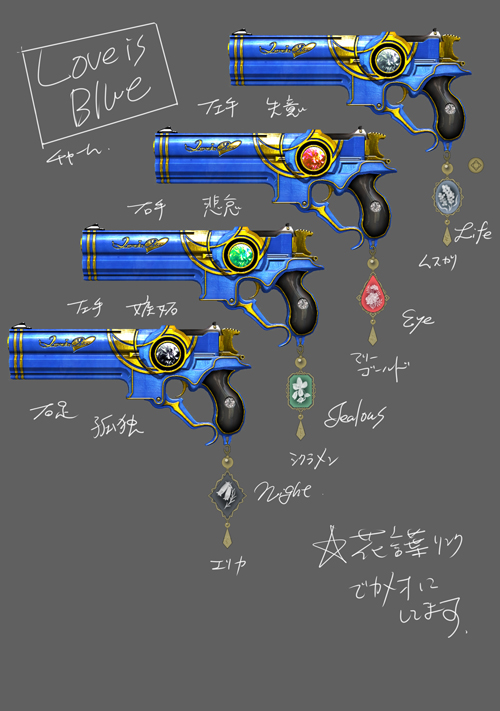 With her guns, finding a good balance of color took a lot of brainstorming. Accenting blue too strongly or giving it too much space didn’t fit Bayonetta’s look. We arrived at the final design by giving them a more striking shade of blue, adding some gold to match her chestpiece, and spreading a silver luster across each gun.

We’ve given Bayonetta’s new guns some antique charms to match her new look. I drew flower cameos that I felt matched the respective gun’s color, and emotion connected to that color.

Taking a step back and looking at how Bayonetta’s design turned out, I realize we went in a direction completely opposite from the last game. That also makes me think Bayonetta’s new look is possible because of her previous one, and will stand out because of that contrast.

I think she gives off a different impression than before, but still owns the name Bayonetta. 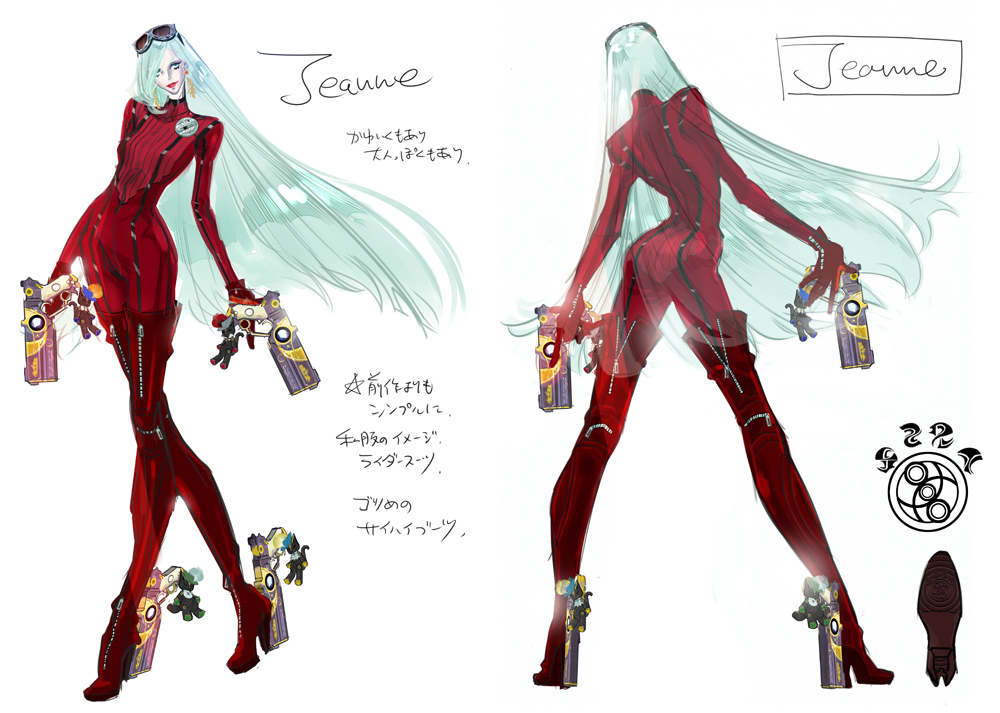 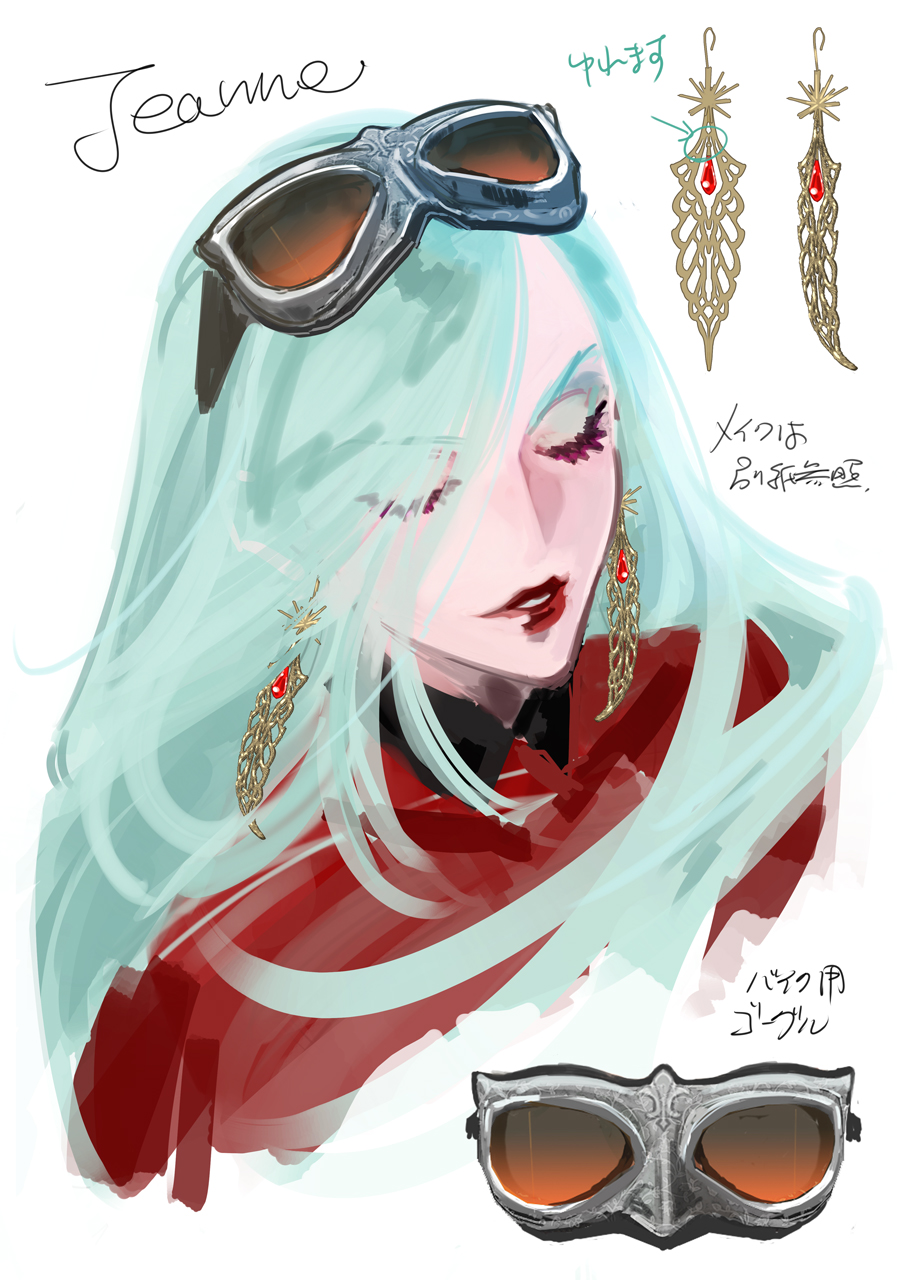 The keyword for Jeanne’s concept design in Bayonetta 2 is “casual.” Design started when Kamiya came up to me and said “I want to put her on a bike. Draw me a biker suit.”

Jeanne is one of Kamiya’s favorite characters, so most anything Hashimoto and I said would get shot down instantly. I just drew biker suit after biker suit until one was approved. There were actually a few more he liked, but they all maintained a relative simplicity similar to her final approved outfit.

I didn’t intend to accentuate this part of her in my concept art, but Kamiya said Jeanne looks flatter than ever. He was happy about it too, so that’s fine I guess.

Thinking of how she would look side by side with Bayonetta, we decided to give her long hair. I wish I was a witch and could just summon my hair into any hairstyle I wanted. 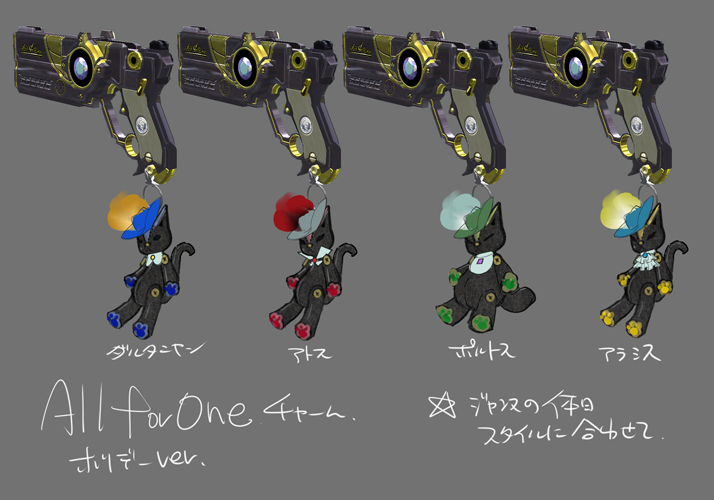 Jeanne still uses her All 4 One’s in Bayonetta 2. Her charms, though, I decided to update with a personal touch. For the last game, I based her charms off each respective gun’s name, but this time I used the name of the whole set as the motif and made Three Musketeers plushes. I borrowed the color scheme from the Three Musketeers Anime.

If I gave these charms to Bayonetta, I feel it’d be a little too much altogether, but I think they add the perfect pinch of sugar to Jeanne’s design. Personally, I’m happy with how they turned out.

Okay, that’s all for this time.
Please look forward to the game’s release. See you again.