Today marks one year since Bayonetta 2 went on sale in Japan, so we gathered some of the development team to celebrate.

Look at this Bayonetta 2 cake!!! It really exceeded our expectations to the point that people were gasping when it was revealed. 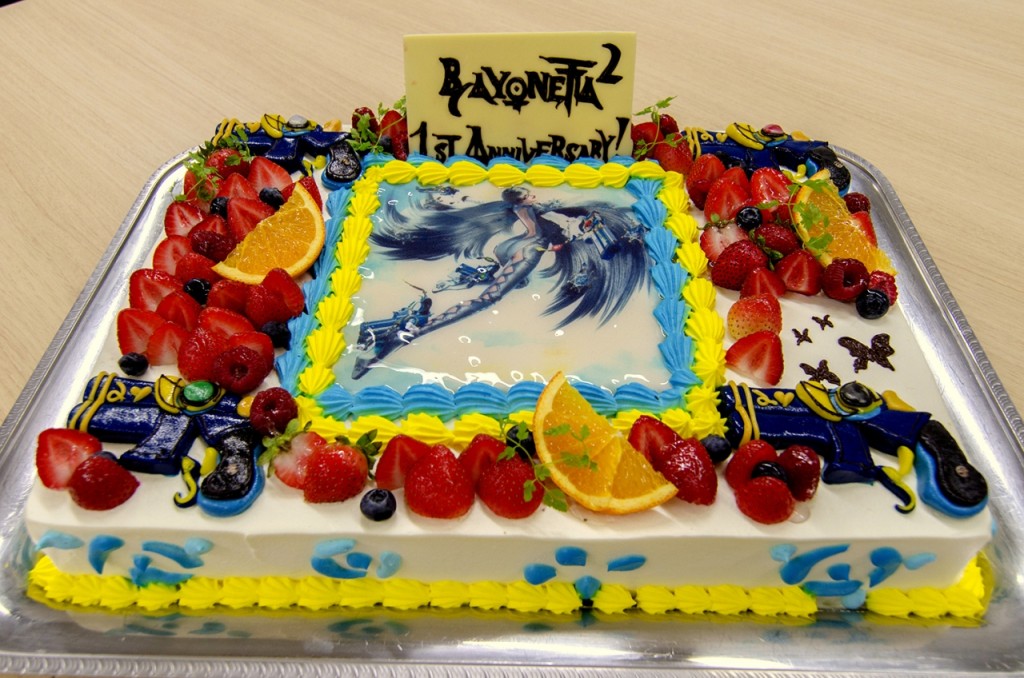 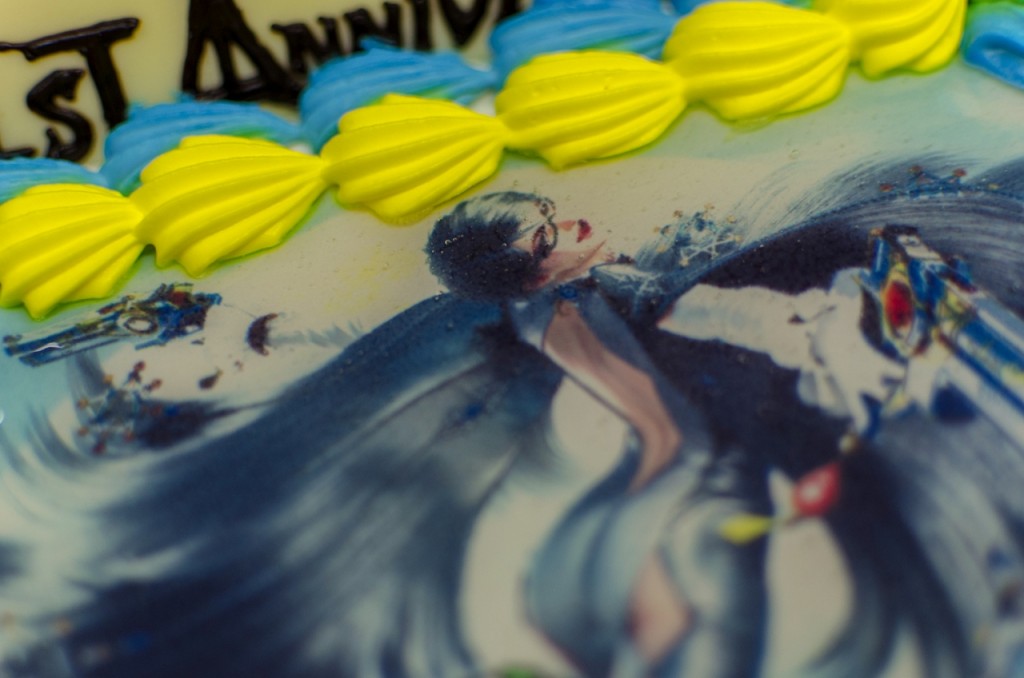 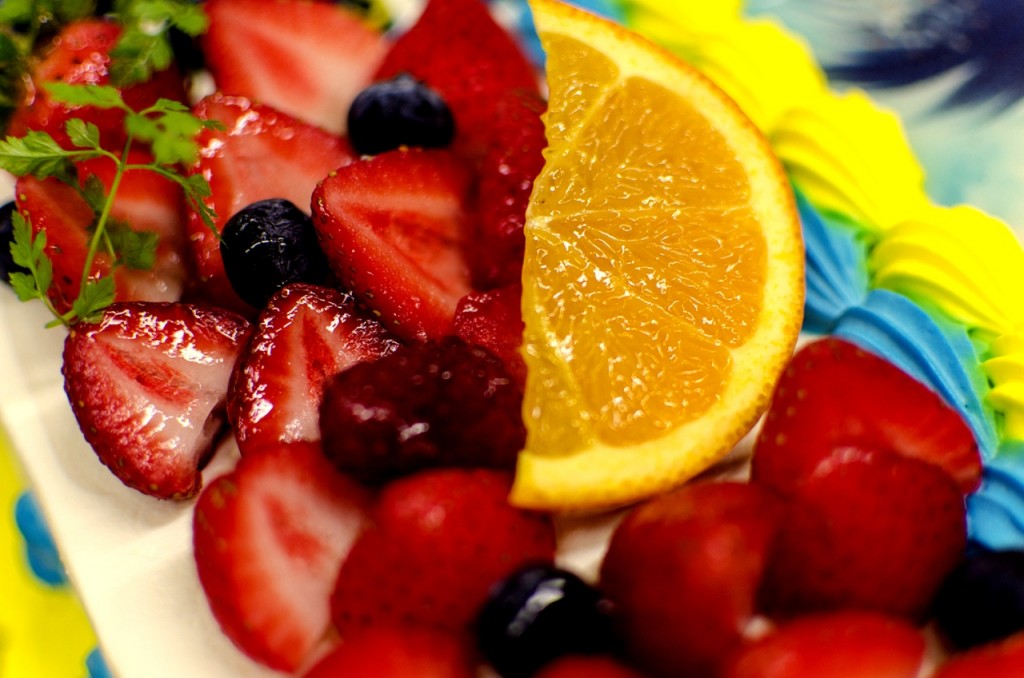 It’s hard to believe a year has already passed. All of the staff have since split up to work on different projects, so it was the first time in a while for us all to be in the same room. We put on the game’s soundtrack and shared some development memories. 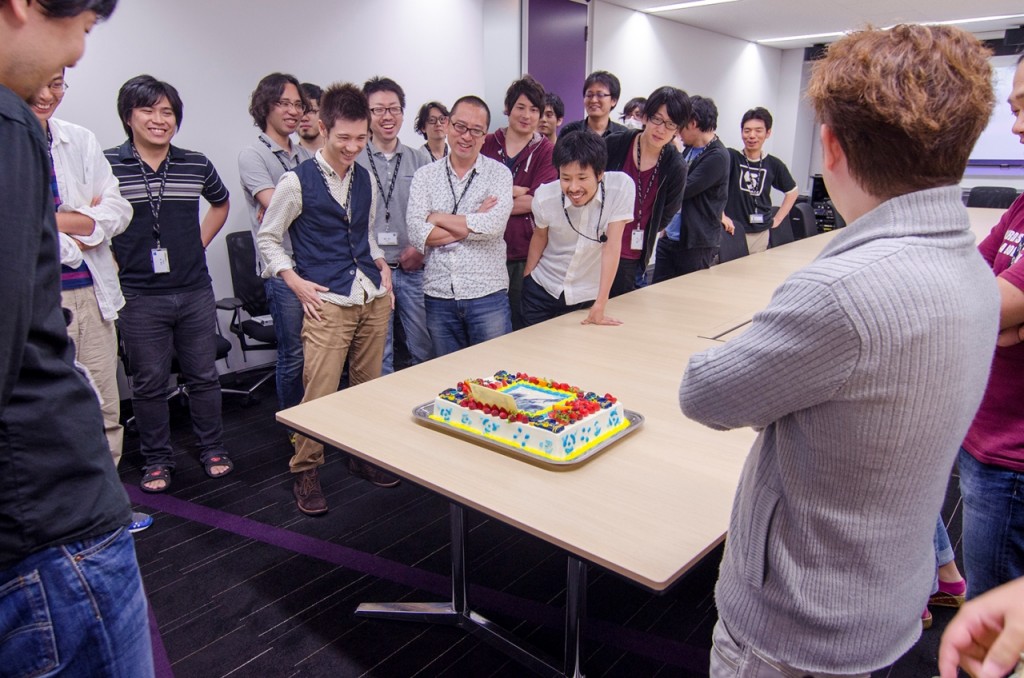 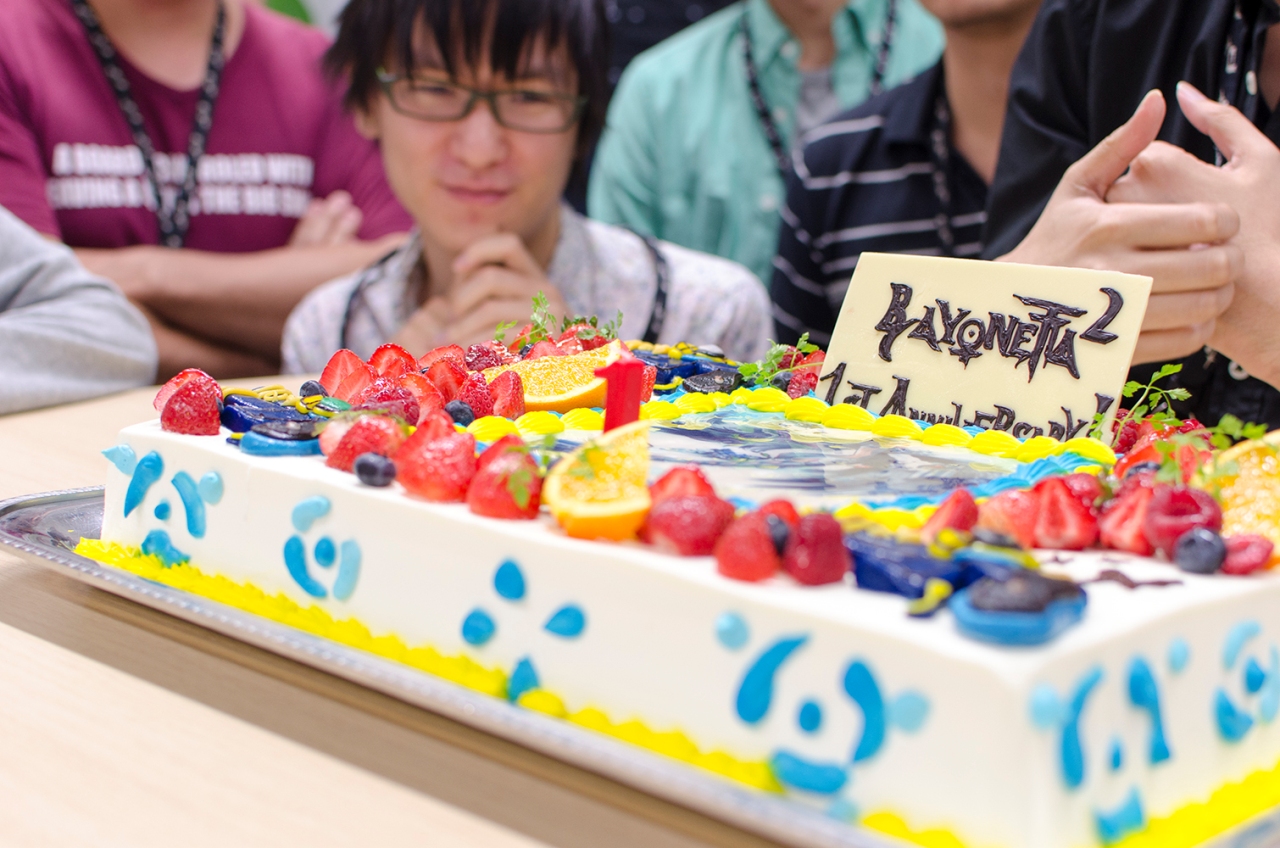 It just so happens that the game’s director, Yusuke Hashimoto, has his birthday this week as well, so we threw him a little extra surprise. 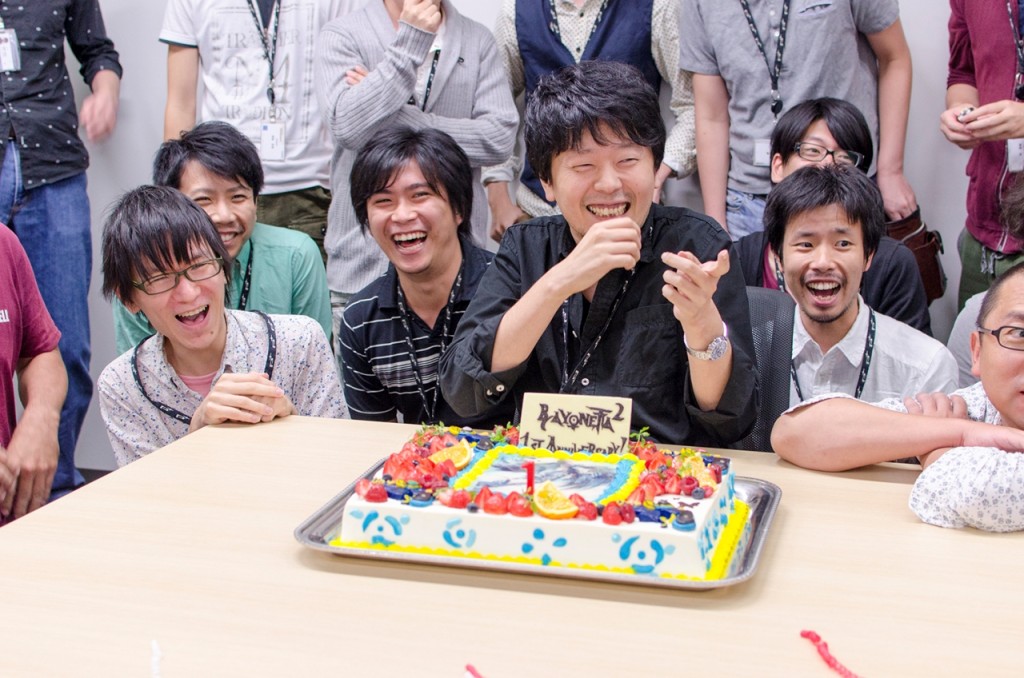 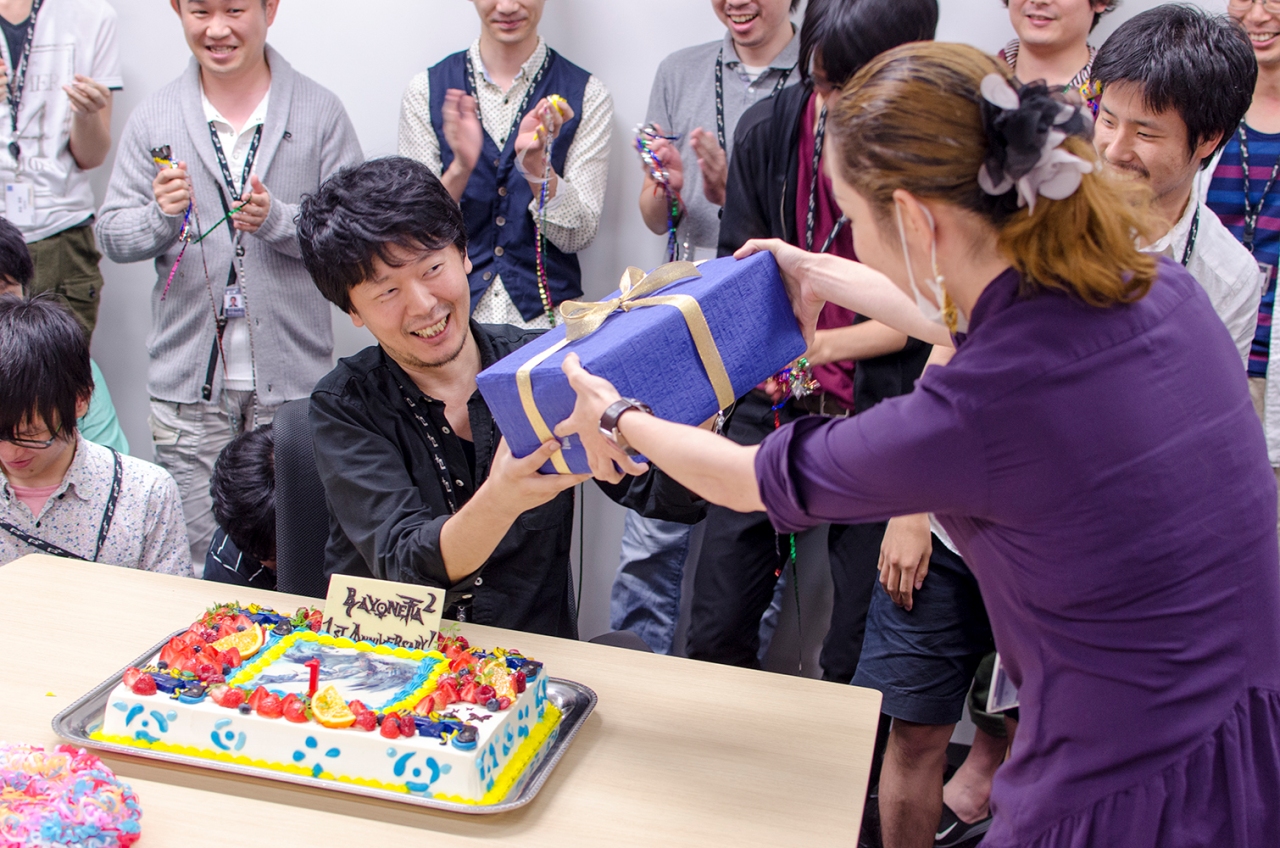 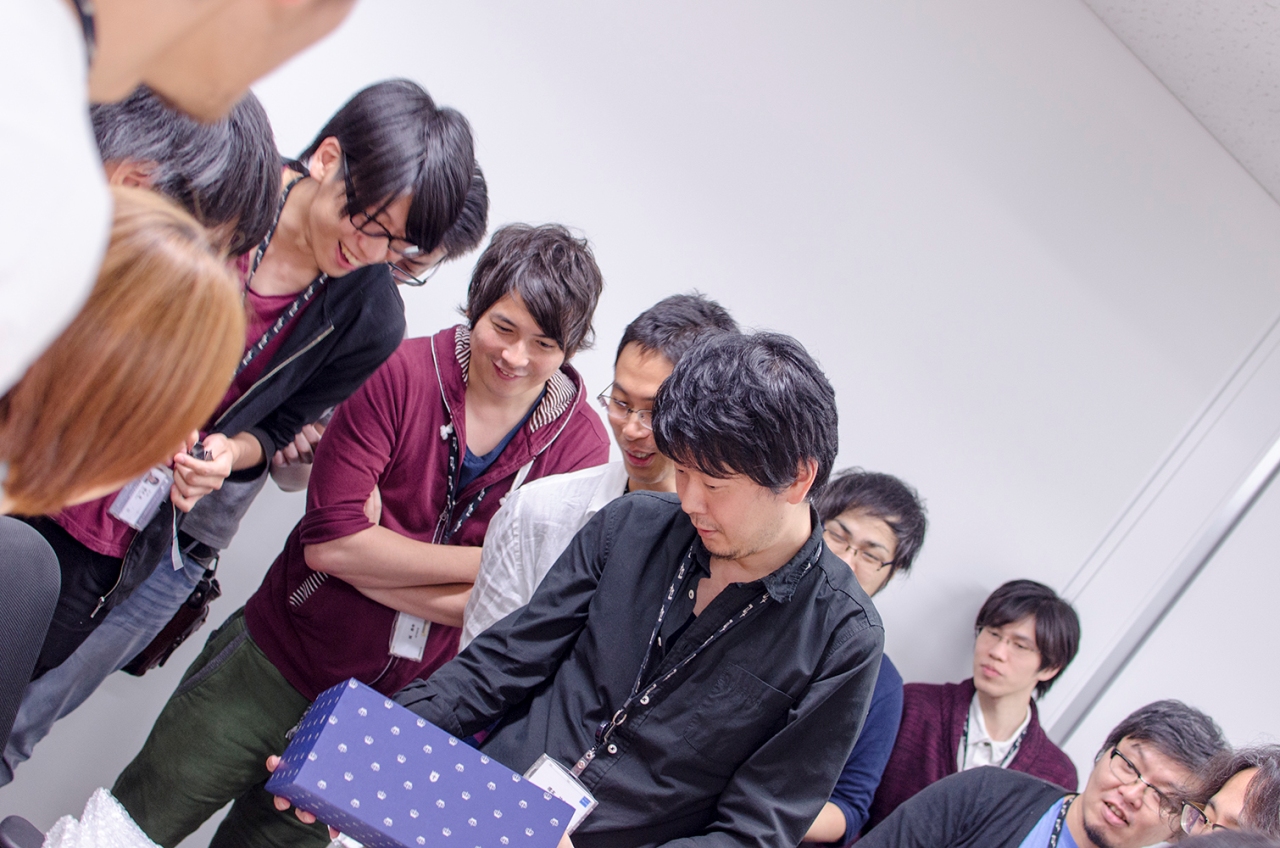 UI designer Mai Ohkura passes him a gift. Inside was a set of Bayonetta 2 dolls! 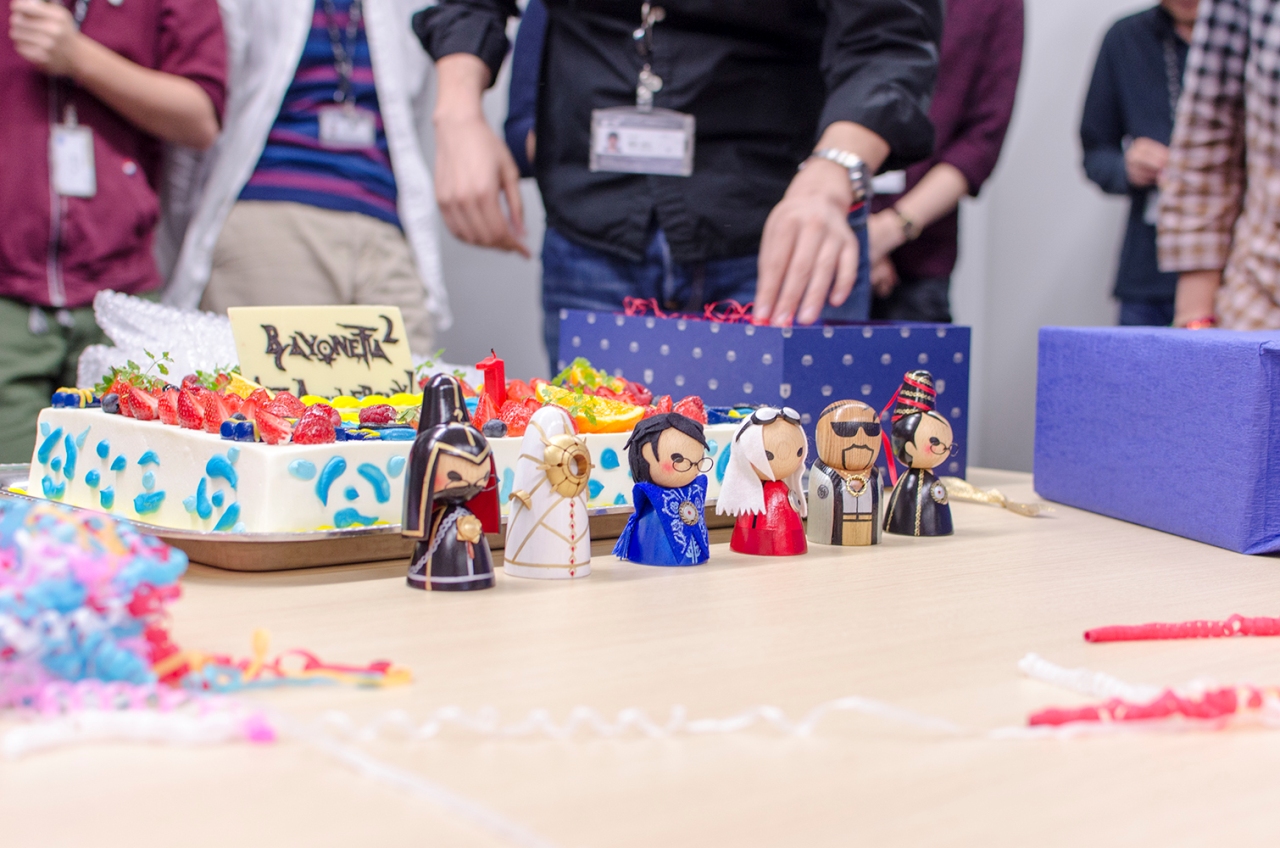 Hashimoto is known for his deadpan face most of the time, but today we were able to catch him off guard and get some pretty good reactions. 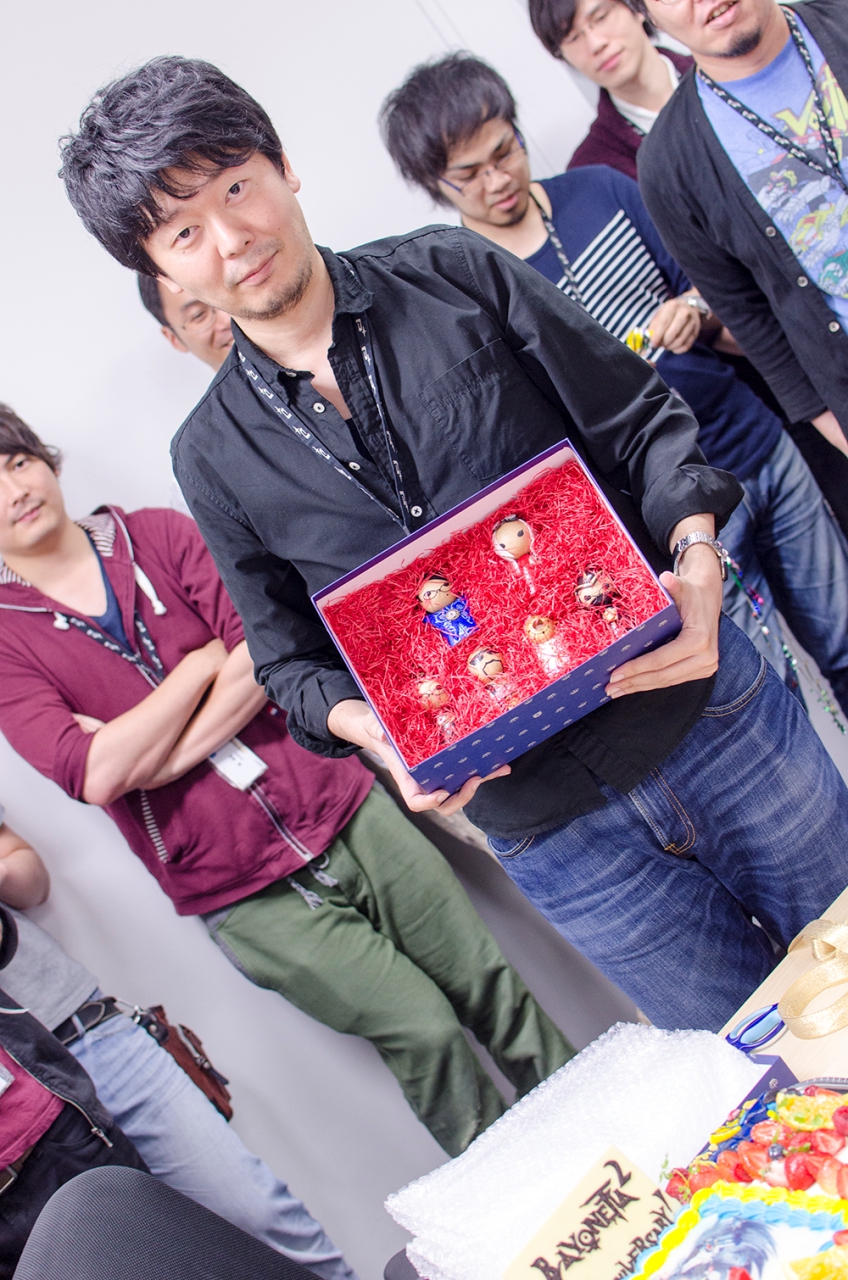 Okay. Time to eat that cake! 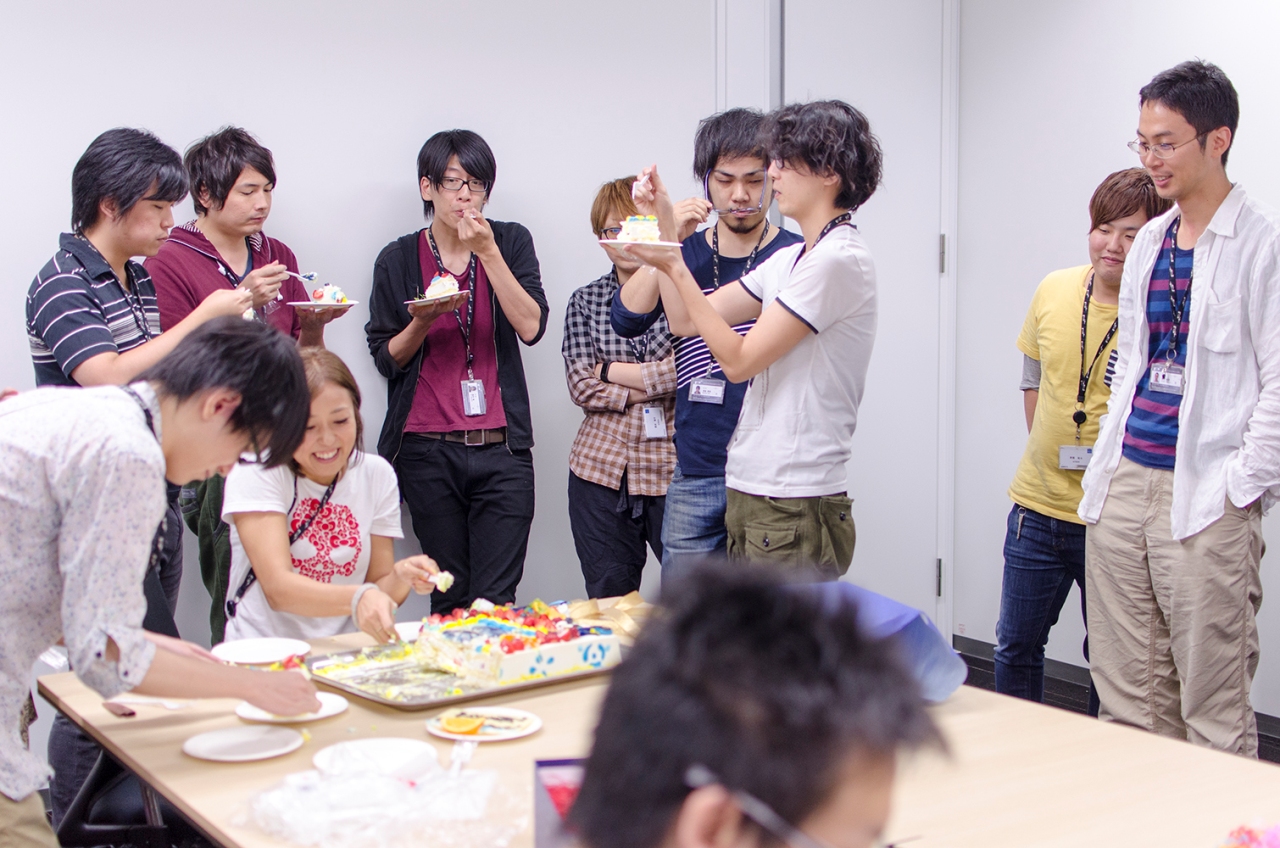 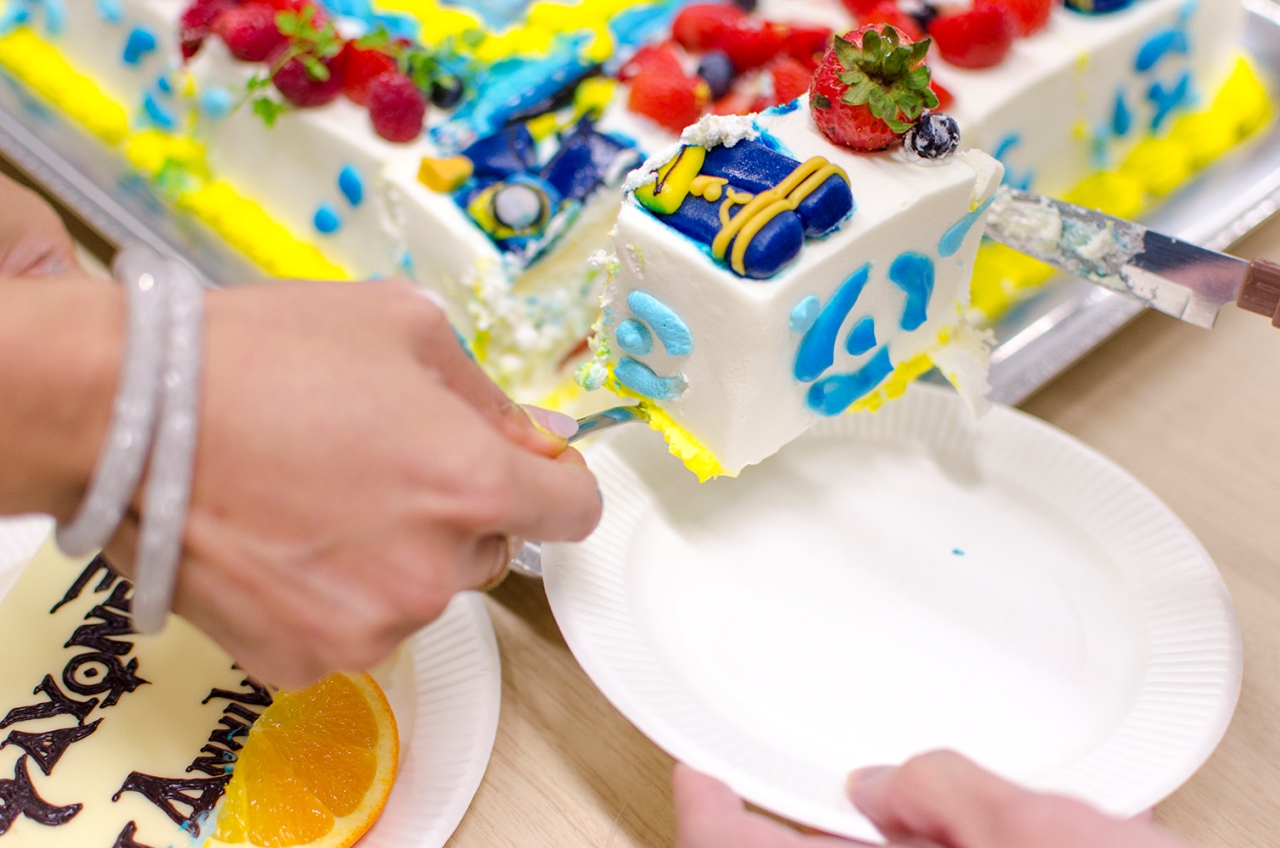 To further celebrate the anniversary, we have also have a message from Hashimoto himself. Please read below.

Hello everyone, how are you? This is Yusuke Hashimoto, the game’s director.

It’s already been one year since Bayonetta 2 went on sale? Time sure does fly.

I’m grateful that I still receive messages from fans regularly, telling me their thoughts about the game. Thanks so much! I thought I’d take a minute to talk about some of the extras we provided in the game. After it was decided that the game would be developed for the Wii U, at some point there were talks about collaborating with Nintendo for some of the games extras (although, by the time this came up Kamiya had already claimed Peach, Link, and Samus for the Wii U remake of the original Bayonetta! Gotta be fast with that guy…)

Therefore, for Bayonetta 2, we decided to shift the focus to collaborations that would have a direct effect on gameplay, instead of them merely being alternate costumes. Bayonetta is somewhat unique in that you can equip weapons to your feet, which led to the idea of using that violent Chain Chomp from the Mario and Zelda series. I still remember being taken back by how quickly Nintendo approved our idea to have their Chain Chomp fly off and explode when it hits the enemy. 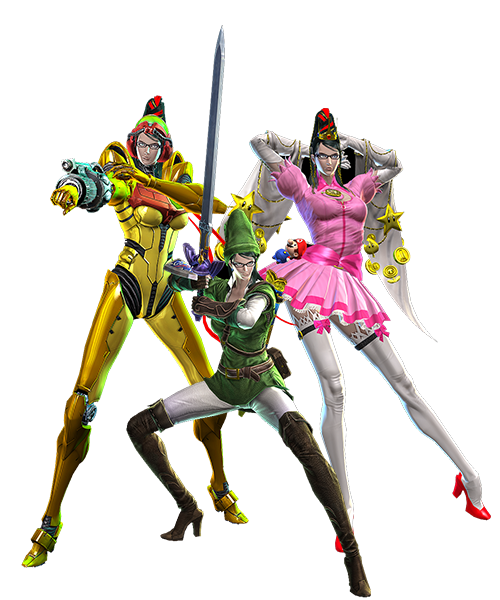 Since the Star Fox series was a personal favorite of mine, I requested to add a Star Fox costume and weapon as well. And then I remembered we had a shooting stage. I told the team “Guys, we have to make it so you can ride an Arwing (the high-tech all-terrain combat ship in Star Fox) in this stage.” I knew it was a bit of a tall order but the team didn’t let me down (by the way, did you know that three more Arwings will appear at the end of the stage after finishing it piloting your own?). And of course, it was because we put this in that someone from Nintendo noticed it and thought “maybe we should ask Platinum about that next Star Fox title…” Honestly, I’m still amazed at how much content the staff were able to fit into the game right up until the end, and I believe that their unwillingness to compromise quality led to the opportunity for us to make Star Fox Zero, so I have to express my gratitude to their hard work. We’re back at it again now, trying our best to figure out how to provide unique gameplay experiences that utilize two screens in Star Fox Zero—look forward to it.

I’ll mention one more little behind-the-scenes piece of info while we’re at it. There’s one extra that I wanted to include in the game, but we ultimately had to drop. It was a costume based on Famicom Tantei Club (A Japanese-only detective adventure game for the Nintendo Entertainment System), the first video game I ever finished. We were thinking that dialog could kind of fly out from Bayonetta’s weapon when she attacked, and this dialog could change the longer you held the attack button. We were also thinking that wearing the costume could cause “incidents” to occur in Noatun, but it just pushed us way over capacity so we eventually had to cut it. Alas J

One more thing before I go… We’ve seen a lot of Bayonetta merchandise up until now, but I just want you to know there are still things on the horizon that will blow your pants straight off, so be sure to keep an eye out! And as always, thank you for playing. 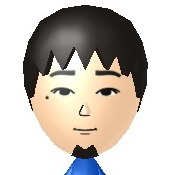