Hello! I’m Masami Ueda, a music composer at PlatinumGames, here to write about some of my work on NieR:Automata. I didn’t compose the music for NieR:Automata, but I did implement it – that means I was in charge of the technical side of how you experience the background music in-game.

By the way, not to boast, but the NieR:Automata audio team has been nominated for the 2017 CEDEC Award for Sound. (CEDEC is the Computer Entertainment Developers Conference, a major games industry conference here in Japan. Every year, game developers across Japan nominate and vote on awards presented at the conference. It’s kind of like the Game Developers Choice Awards at GDC.)

We’re tremendously proud to be nominated for such a distinguished award. Of course we were able to achieve this honor thanks in a large part to Keiichi Okabe’s wonderful score and YOKO TARO’s fantastic direction!

Today I’m writing about one part of NieR:Automata’s music implementation that took a special amount of care. At a recent audio team meeting, I was surprised to hear the way the music was handled in the hacking sections get the warmest reception. With that in mind, I’d like to focus on that implementation to give you a behind-the-scenes look at my work. 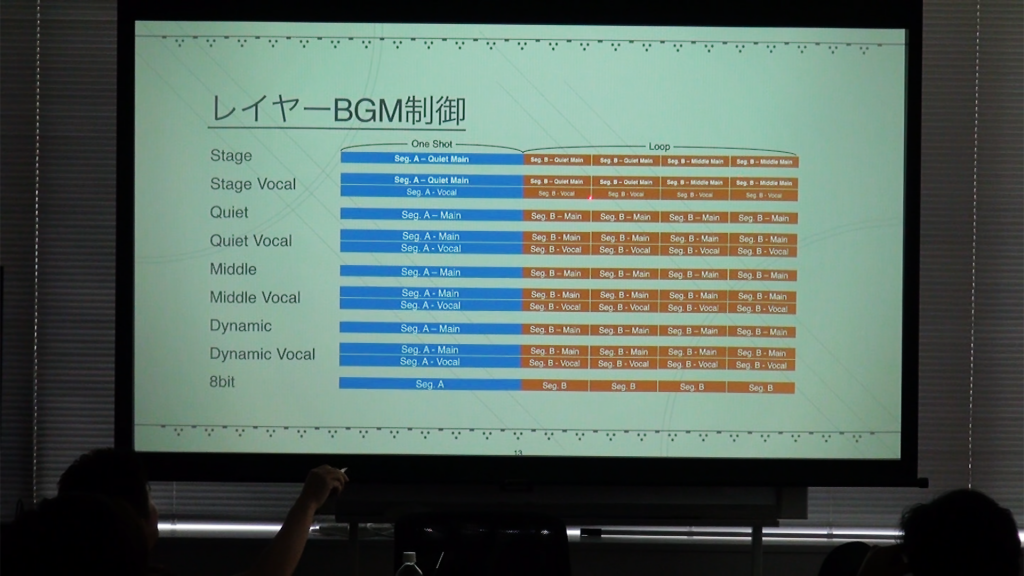 Whenever 9S hacks into one of the enemies or chests in NieR:Automata, the background music morphs into an distinctive electronic version, like you might hear in an 8-bit game. Now, we hadn’t planned on making 8-bit versions of the score at first. However, inspired by the “Legend of Nier: 8-Bit Heroes” track on the “NIER Gestalt & Replicant: 15 Nightmares & Arrange Tracks” soundtrack from the original game, I suggested using 8-bit sounds in the hacking scenes. It seemed like a great opportunity to make use of an effect called a Tone Filter, which I had given a presentation on at CEDEC 2015.

Many songs from the NieR:Automata score got original 8-bit versions! But we couldn’t make 8-bit versions of every single piece from scratch. In some cases, we had to use some automatically-generated music. So what does that system look like? Hang on, this gets a little technical…

How the Tone Filter works

First, we take the music we want to 8-bit-ize, and convert it from stereo into mono. Next, a 48-tone range (four octaves) is filtered out as a sine wave – drastically cutting out any very low, very high and subtle tones. Then distortion is applied to this range, changing its waveform into a square wave (a harsher sound associated with classic game consoles). Finally, anything difficult to hear after this is aggressively lowered and this processed tone range is mixed back in with the original track. There are other ideas we could have explored for more precision, but this system was focused more on handling several consecutive changes. Here’s the whiteboard diagram that our audio programmer Shuji Kohata drew to explain the system: 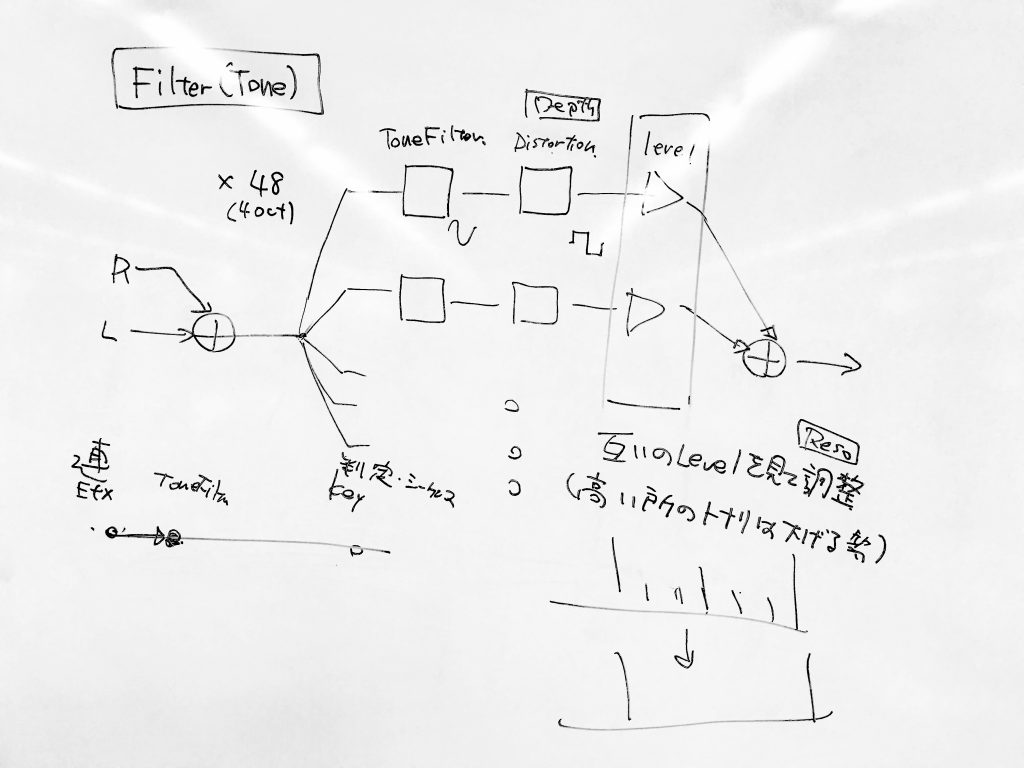 (Here you can see how part of the music is filtered, altered and mixed back in. As drawn in the bottom right, we kept an eye out for parts that might be difficult to hear as both parts recombined and made adjustments to keep a clear mix.)

Hear the Difference!
Transitioning into 8-bit

This is a straight transition into the 8-bit version of this piece of music, without the tone filter applied. Once 9S has successfully hacked into the enemy, the music crossfades into the 8-bit “hacking” version. This already sounds pretty good, but there’s still room for improvement.

Now we’ve added a transition using the tone filter, which starts fading in once 9S starts hacking. This softens the switch over to 8-bit, which adds to the impression that 9S is trying to hack, but doesn’t know whether he’ll succeed. It also makes for a nicer connection to the 8-bit version when the hack is successful.

What if there’s no 8-bit version?

The process is the same for music that doesn’t have a corresponding 8-bit version, at least until the hack succeeds. Instead of fading completely out, the regular version of the song lingers in the background while the filtered version continues to play over it. We’ve opened up our software to show you what it sounds like as we tinker with it! (Make sure captions are turned on for English labels.)

This uses quite a bit of processing power, so we can’t run wild with effects like this right now. But I look forward to being able to take advantage of systems like this for even more precise operations in the future.

All things considered, there’s a lot about music processing that’s pretty difficult to get across in writing. But one thing that’s certainly true is that it takes a lot of small improvements, tweaked and tested and built up, to create a quality musical experience. Of course we put a lot of care and attention into other aspects of NieR:Automata’s sound implementation, too… but those will have to wait for another time!

Masami Ueda
Masami Ueda has composed music since before PlatinumGames’ earliest days, working at Capcom, Clover Studio and SEEDS. You can hear his work in a wide variety of beloved titles, such as Resident Evil 1, 2 and 3; Devil May Cry; Viewtiful Joe 1 and 2; Okami; and Bayonetta 1 and 2.
Beyond composing music, he strives to push the boundaries of game audio. He was the audio director and implementer on Transformers: Devastation and Teenage Mutant Ninja Turtles: Mutants in Manhattan. His most recent work is the sound implementation for NieR:Automata.