Hello, I’m Muneyuki Kotegawa, and I worked as both weapon designer and 3D modeler for Bayonetta 3.
In this Umbran Studies entry, I’d like to introduce you to a few of the weapons Bayonetta uses in the game. 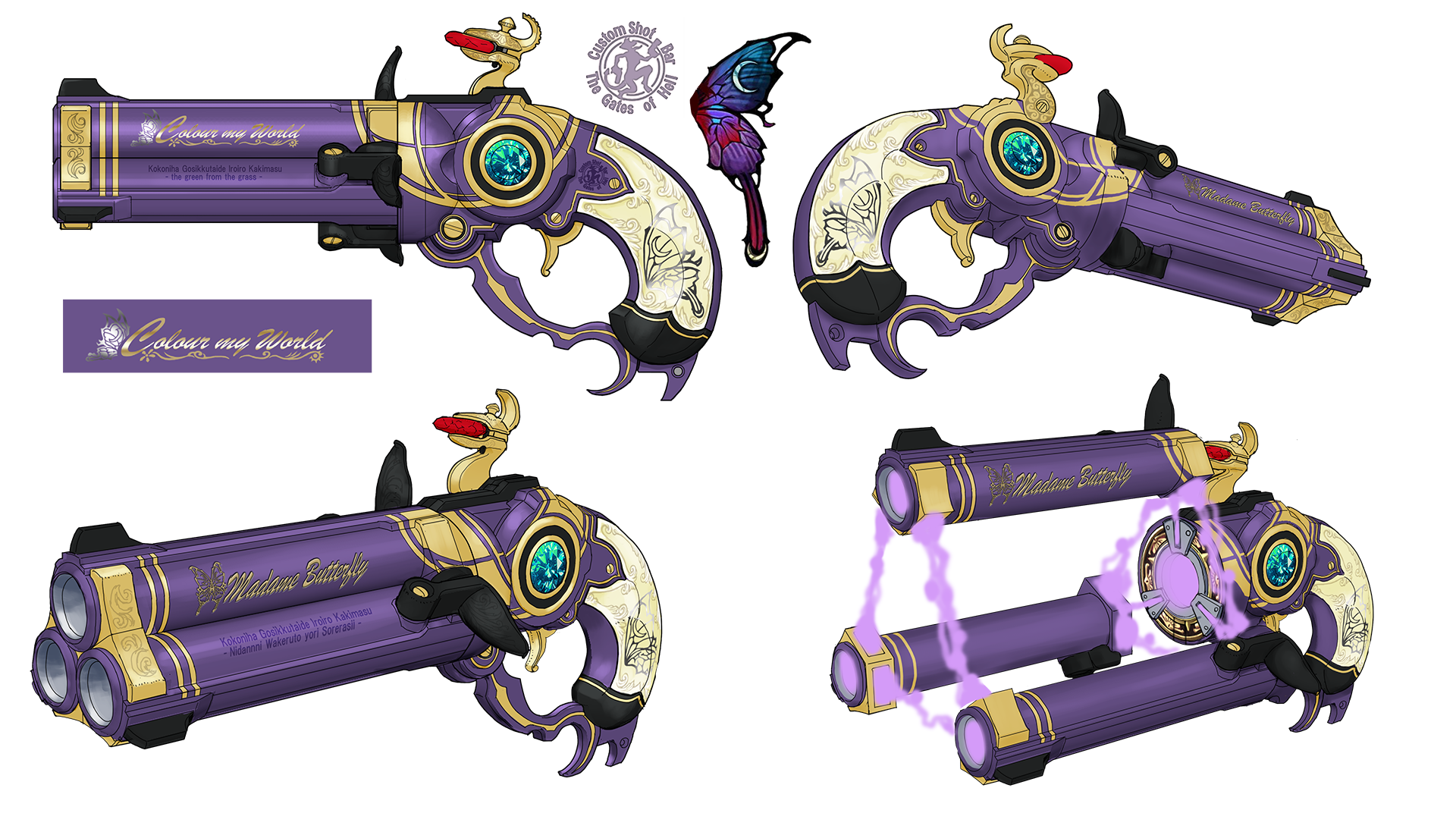 These are Bayonetta’s signature weapons in the latest game. The first game had her using single-loaders while Bayonetta 2 had her using more automatic weapons. For Bayonetta 3 she’s using antique guns. The grips have butterflies etched into them to represent Madama Butterfly.

It’s also fun to look out for the “3” that’s been incorporated into the design. 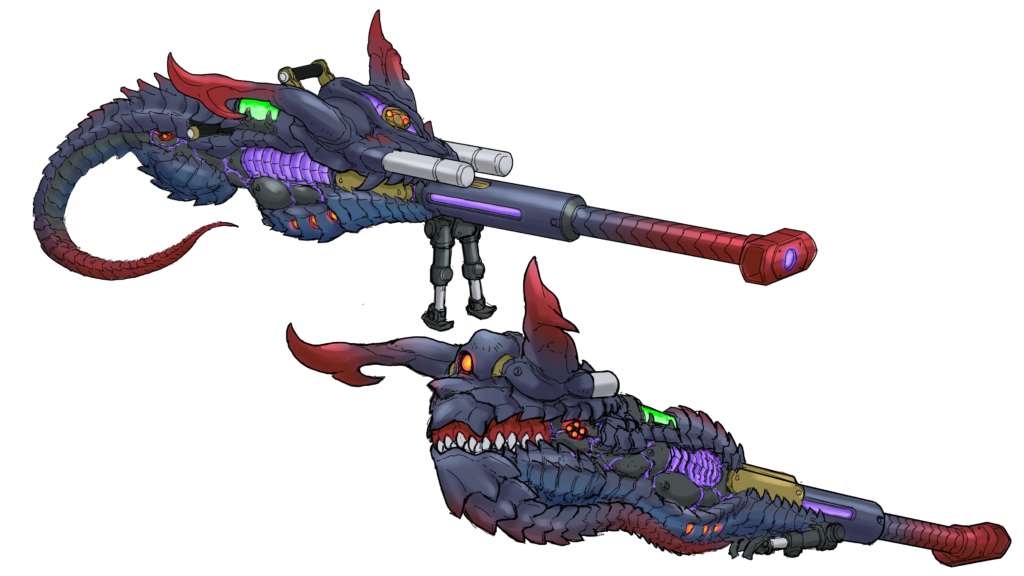 This is one of the first weapons I designed for Bayonetta 3. I drafted the design while thinking about how to apply the game’s concept of each weapon having an Infernal Demon bound to it.
The design looks both organic and inorganic at the same time, to represent it containing the power of an Infernal Demon. The huge mouth is designed to be able to perform bite attacks. 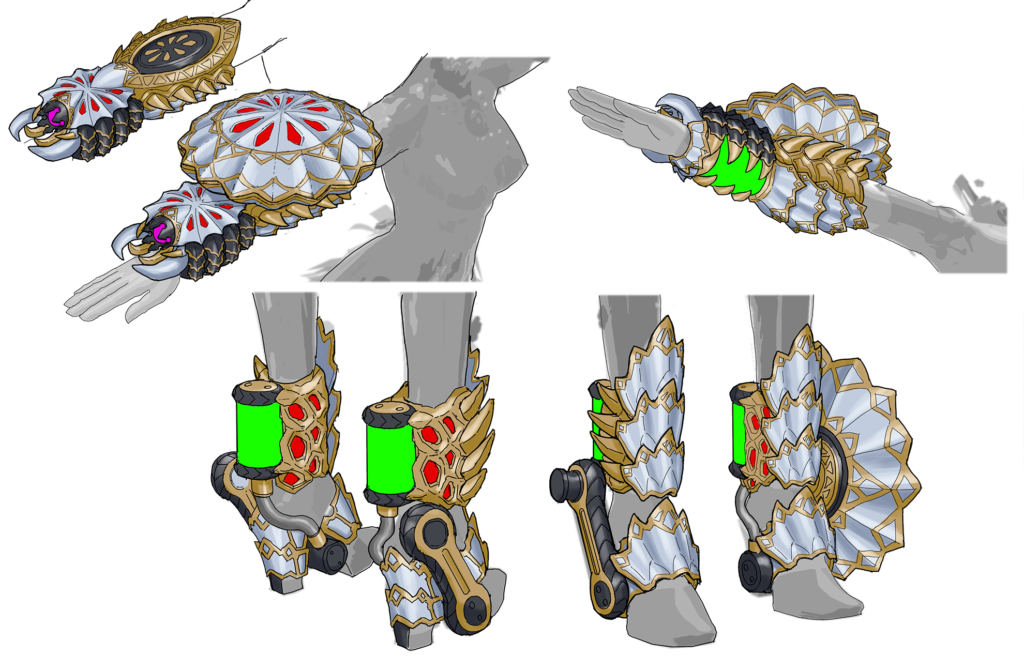 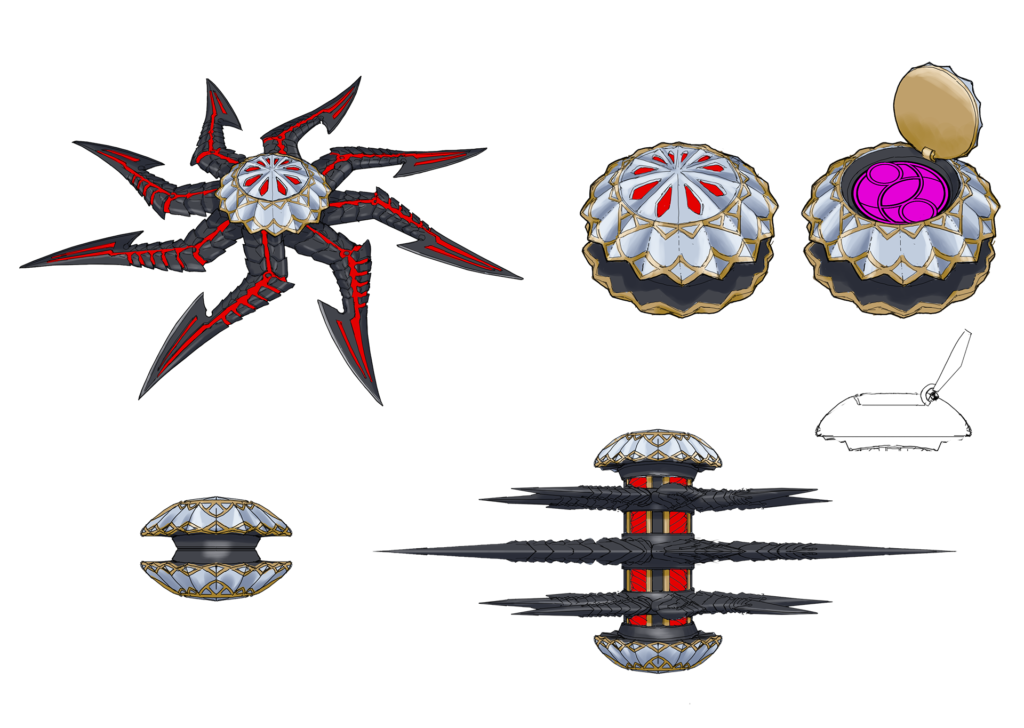 This is a set of weapons that attaches to the arms and ankles.
The Infernal Demon it is based on already has a weapon-like appearance, so it was relatively easy to design.

Although this could somewhat apply to all the weapons, parts of the weapon (the blades and spines in this case) grow in size to account for the fact that you encounter a lot of gigantic enemies in the game.
I also added a bit of a gimmick, as you can find a certain crest in the part us in the modern-age would called a yo-yo. 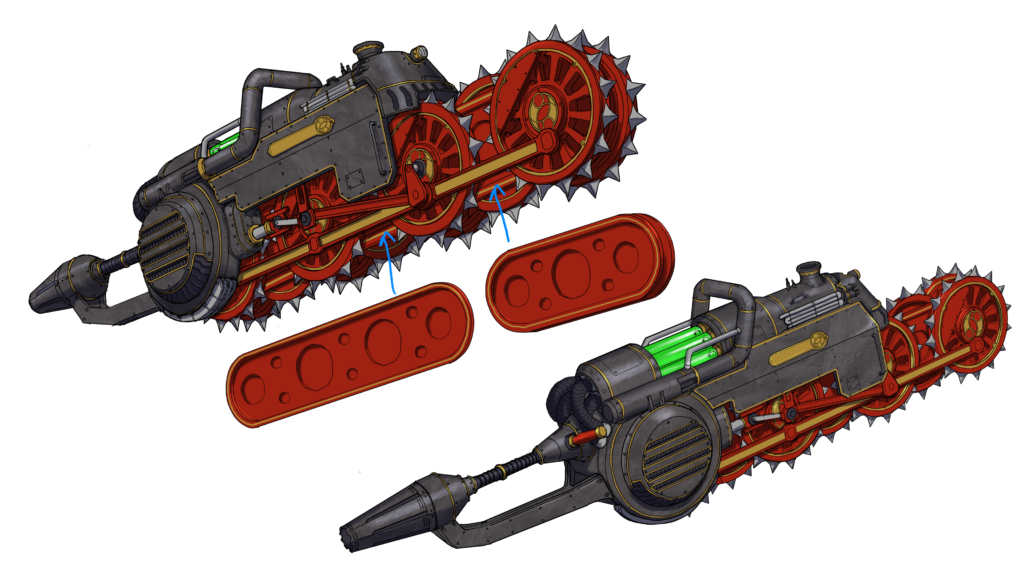 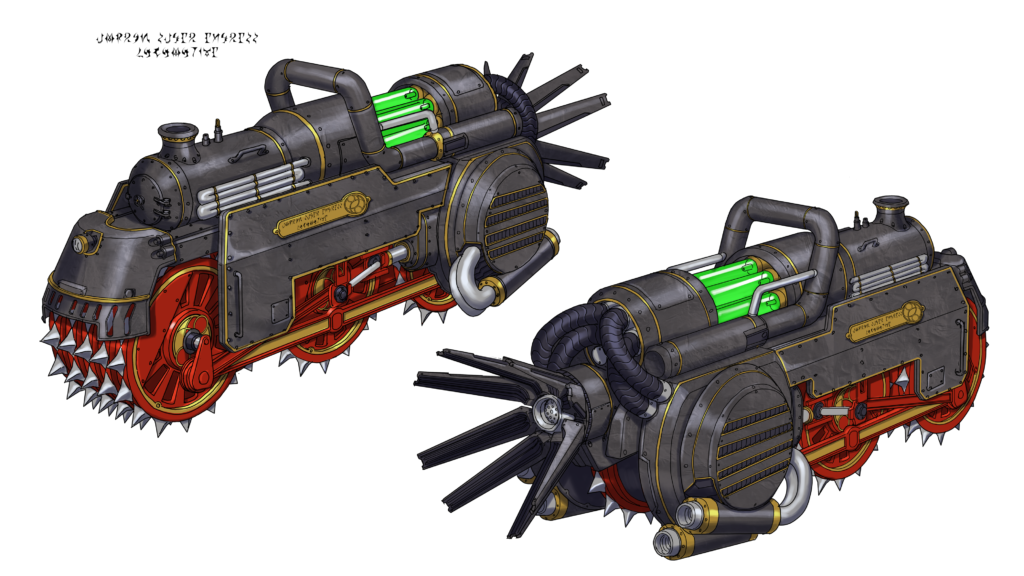 A super gigantic weapon—the Umbran Super Express locomotive.
One of the concepts for this weapon was transformation, so I designed it so that can transform into an actual vehicle.
It’s attacks are very powerful, so will surely be a favorite for those of you who are fans of heavy machinery. It’s actually my favorite, too.
It also works as a chainsaw, because what’s a Bayonetta game without a chainsaw? 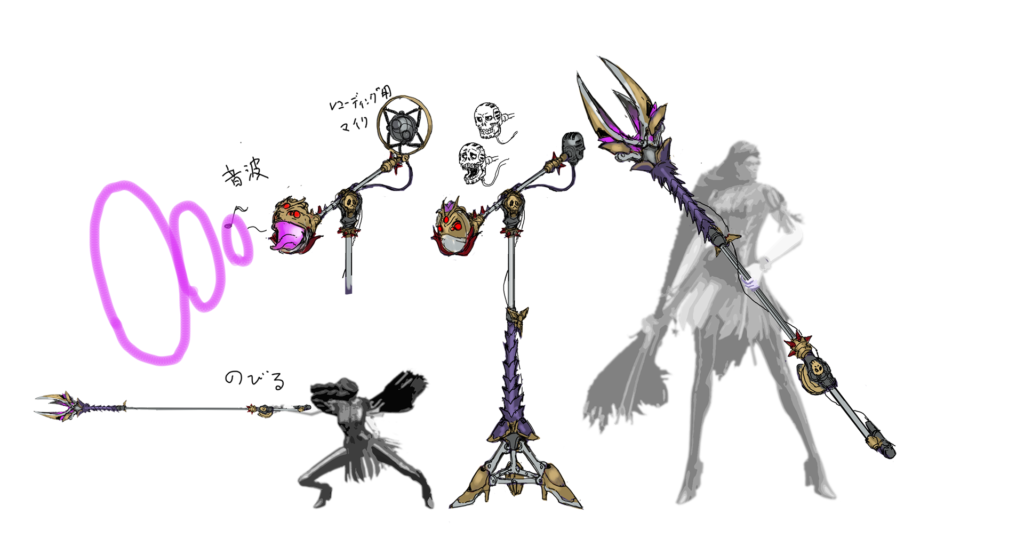 I wanted to use some kind of spear to add some diversity to the weapon types. I ended up coming up with the idea of combining a spear and a mic stand into a weapon bound to the Infernal Demon Baal, who can use her voice as a weapon.
It can be freely extended, broadening the attack range.
The funny addition of the face is pretty Baal-like, too. 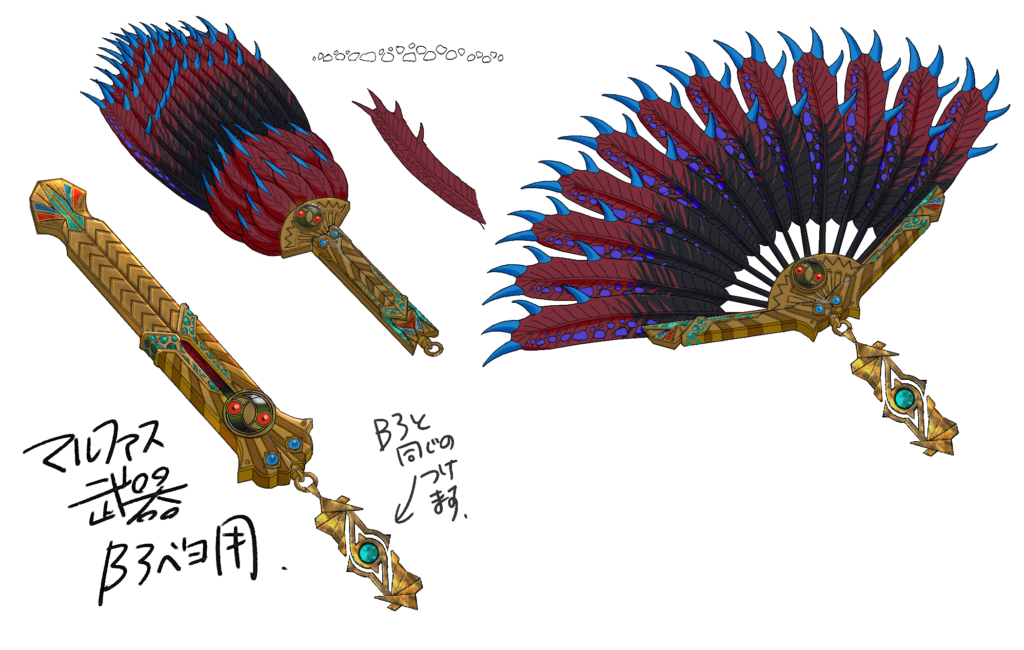 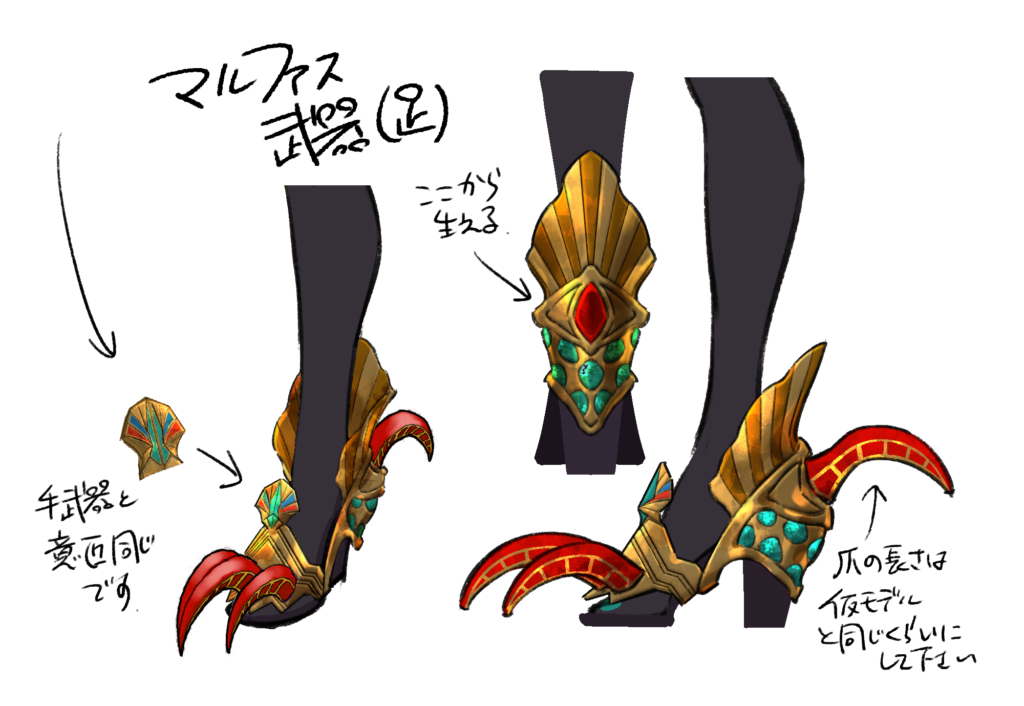 As this weapon is bound to the Infernal Demon Malphas, I thought of using feather fans, which is how we got to this design.
Malphas can also grab with its claws, so I thought of adding some talon-like equipment to the feet.
I originally went for a Chinese-style design, but considering the location and characters who would be appearing, it was changed to an Egyptian-like design instead.
Character designer Mari Shimazaki was suddenly asked to come in and modify the design, but it worked out surprisingly well.

As I designed the weapons for all 3 Bayonetta games, I didn’t have any trouble with the overall style for this one.
Rather than waiting for requests from above, I went ahead and put together ideas in advance and I think that may have helped the process go a lot more smoothly. There were a few weapons for which I only had time to come up with the design and rough sketches, but the 3D modelers were able to bring them to life with no issues thanks to their experience on the previous two games.
There are plenty weapons and Infernal Demons appearing in Bayonetta 3, so I hope you can find the ones that fit your style!