Hi. I’m JP Kellams. While I normally blog about other things, this time I’d like to talk about my role in the English adaptation of BAYONETTA here at PlatinumGames.

I suppose the first thing that stands out is why I did not use the word localization. Localization is a very software specific term, and while games are software, you have to consider what really comprises the bulk of getting a Japanese game into English. Sure, translating menus and such are classical localization tasks; however, the most important part of the job I had on Bayonetta was taking the compelling script that Kamiya-san had written for the game and getting it into English.

Prior to joining PlatinumGames, I worked on a variety of titles, including the English script for Shinji Mikami’s God Hand, but this is my first opportunity to work with Kamiya-san. In fact, I was a bit intimidated, as it seems to me that the worlds his games encompass exist fully realized in his head, and to deviate even a little would be both a disservice and unacceptable. Yet, one of the lessons I learned from God Hand was that deviation is necessary and productive to adapting these stories into English (especially since God Hand was basically a love letter to obscure 70s and 80s Japanese pop culture). Surprisingly, Kamiya-san was very open to my ideas, and we would collaborate on ideas ranging from character and location names to the little details like what should be written on Rodin’s apron (“I love chicks” with a small baby chick logo). In fact, during translation, Kamiya-san would sit with me at my desk going over my day’s translation work, discussing lines, doing rewrites, and approving/rejecting additions or rearrangements I had made. His time and input really helped me, and it is incredibly rare for that kind of attention to be paid by the Japanese director.

So what were the challenges of realizing Kamiya-san’s story in English? Well, Bayonetta herself presented a number of issues. How would a European witch from 500 years ago talk if she had been exposed to grimy pseudo-American urban culture for 20 years? Kamiya-san was very specific about making sure Bayonetta spoke in a British accent, and while I have a basic understanding of the King’s English, I was blessed with the input of numerous British editors. Also, the Americanisms that would surely come into her vernacular aren’t something that can’t be accounted for in a Japanese script, so I was always thinking of how to incorporate those into her lines.

Then there was the issue of Bayonetta’s character.（Sorry for throwing in my own interpretation…）To me, Bayonetta had to be posh, sassy, and totally aware of herself. When Bayonetta is cheesy, she knows she is cheesy. When she is teasing, she knows she is teasing. Her inner monologue is fast enough to get out the line a normal person only wishes they would have said, and she exudes confidence in everything she does. There is nothing subtle about her, but that is exactly what you want her to be, and she knows it. This proved to be the hardest part of the translation to balance.

To counter-balance her you have Jeanne, who is more reserved, more sinister – an ice queen’s ice queen – with far more going on behind her eyes than you realize. Throw Luka, a not-so-innocent character (he does love chasing the girls), but ultimately a driven, passionate, kind-hearted soul, into the mix and you have the makings for some interesting situations. You also have your full compliment of character types with the child (Cereza), the wise old man (Rodin), the jester (Enzo), and the trickster (I’ll leave this one to your imagination). Kamiya-san’s interesting Japanese script, with its strong characters, and the wonderful direction of Yuji Shimomura, really lent itself to a compelling story. I hope you all enjoy the ride.

There were also copious amounts of in-game text, background text, and non-story lines that had to be translated, and in many cases written in English with Kamiya-san’s direction. They all hold meaning, both literal and hidden, so make sure to look over them thoroughly. This meaning extends to one of my favorite parts of the game, the Angels’ voices. Kamiya-san first asked me to come up with sounds for when Bayonetta would summon demons for her Infernal Demon attacks – something disconcerting but powerful. Research led me to an answer not only for her Wicked Weaves, but also for the Angels themselves. A dead, invented (?) language known as Enochian. Transcribed or invented by mathematician and occultist John Dee, a 16th century advisor to the English throne, Enochian is said to be the language of Angels. Dee spent the latter part of his life trying to arrive at a universal language spoken prior Babel and the confounding of language. In Bayonetta, we use Enochian in various places. All of Bayonetta’s summons, both torture attacks and Infernal Demons, are triggered by an Enochian phrase, and all the angelic enemies in the game speak in Enochian.

There are few resources for Enochian, other than some simple dictionaries, so I tried to create an idea of syntax and semantics in my head based loosely around interlinear glosses (in this case a morphophonemic transliteration) used in linguistics. Here is an example of how we did things: 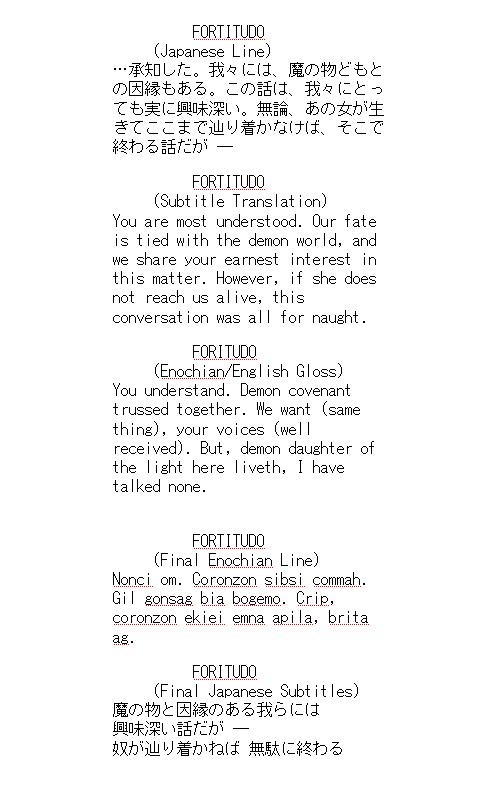 Kamiya-san would then go back to my original English translation for all of the lines and rewrite the Japanese subtitles for readability and to match the nuance of the English translation. I think his work here gave the game an even higher level of polish for Japanese users, and was another one of the many times I was happy I could rely on Kamiya-san’s above average English abilities. Thanks for that, Kamiya-san! …Even though he would always get on my case about things! Hehe.

BTW-Here is another bit of Enochian. For Joy’s torture attack, Bayonetta is saying Piadph (in the jaws of [death]). Sorry to disappoint some of our Japanese fans.

So have fun searching the game for Enochian, whether it be hidden in magical seals or spoken by our cast of characters. Next time, I will go more into the dialogue of the game, and introduce you to our outstanding cast of voice actors!