A confused Kamiya here… I finally fixed the settings on my router the other day, and now my iPod touch gets online no problem, so I can lie around watching Nico Nico videos and wasting money on the App Store, not to mention that I don’t have to go through the connection process every time I turn on my Macbook Air as it just works now! It’s great! But when I think that, I also think that I bought the thing a year ago, and I have no idea what the heck I was doing…

Bayonetta has seen release, and I’m happy that I’ve been able to see Japanese fans getting excited these days, but now we have the Western release to look forward to, and I am getting excited all over again. For instance, the demo was made available to fans on December 3! I’d love for you all to get a feel for Bayonetta personally, as action games live and die on how they feel to play, and the best way to experience that is to pick up a controller and give it a shot yourself. I’ve always said that I don’t say, “I want you to buy our game.” I say, “I want you to play our game.” So, the first thing that I would like you to check out is how it feels to play Bayonetta, as that feeling is something that is very important to us.

Also, for every blog that I write, I do get the chance to read all of the comments that you send in. Thank you all so much! I know we made many of you wait for a while after the Japanese release, but even if it is just a day closer, I hope to share the excitement of Bayonetta with you all soon.

I forgot to blog about this earlier, but did you all get the chance to check out the MTV Japan Bayonetta special that aired on October 28? During the show, Hashimoto came out and was so incredibly nervous that his face turned a strange color, but more importantly, I want to write about recording the narration for the show. The recording took place on October 25, and I was able to sit in.

Bayonetta was narrated by the same voice actress that did the voice-over for the Japanese Bayonetta TV commercials, Ms. Atsuko Tanaka. Amongst members of the team, we would often ask the question, “If someone were to play Bayonetta, who would be good?” Tanaka-san’s name always came up in these conversations, and I, too, was looking forward to the recording.

Once we got into the studio, I saw Tanaka-san already reading the script and practicing her lines. It was my first time meeting her, and my impression of her was different than I had imagined. She has a quiet aura to her, and was soft spoken. However, the voice I heard through the speakers reading Bayonetta’s lines was powerful and vigorous, just like our heroine. Maybe it was because of the gap between her appearance and her performance, but I was left speechless.

I was sitting in on the sessions to explain Bayonetta’s character traits to Tanaka-san, and I thought that I would have to occasionally step in to direct her, but the fear that I would have to do was a bit over-the-top. I ended up just being in awe of her the entire time… In fact, there was really no reason for me to even be there in the end. (LOL) Of course, I was incredibly pleased because it was a great experience for me. The wild ideas in my head really expanded in scope. For instance, if there is ever a chance for Bayonetta to have Japanese voices, I definitely want to ask Tanaka-san to fill the part…

The TV show’s director, Mr. Yoichi Sakuma, is truly a creative individual, and being able to watch from the sidelines was really great fun. Working with people like these really made me feel like we were going to make a great show. It was a wonderful day for me. 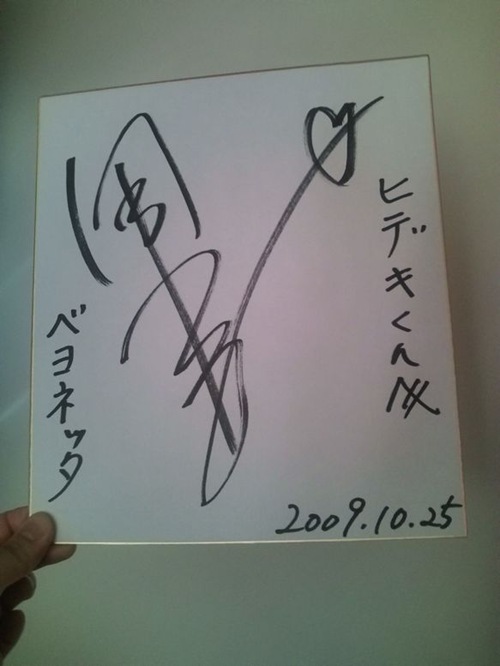 Picture: I got an autograph from Ms. Atsuko Tanaka! I asked her to write it out to “Hideki-kun,” just like Bayonetta would write it. Hehehe. Thank you so much for listening to my ridiculous request!

This is something I mentioned a while ago, but Hashimoto and I appeared on a Nico Nico live broadcast November 15 called “Xbox LIVE Park – Bayonetta Day!” This was my third time being on a live net broadcast. There was nothing like this when I was working on really highly anticipated titles like Resident Evil 2 or Devil May Cry. (Let’s not even get into the worldwide levels of anticipation for Viewtiful Joe or Okami… Suffice it to say, there were no live broadcasts either.) With Bayonetta, it seems that we are getting attention from a variety of places, which is something I am incredibly thankful for as this is an original title.

So on to the show… The show was set up where there was a section where we would answer user questions, another where we would show gameplay footage, etc., so we filled up our allotted 90 minutes. For someone who tends to say things off the record during interviews that would end up causing tons of problems, I get a little bit nervous with the live stuff because I know that I have to be a good boy… However, being able to talk with users directly over voice chat and the like, I was really able to get a taste of the fun that live presentations bring. I am already a big fan of Nico Nico videos, so it was incredible fun for me to see the comments streaming along to my own video.

The other thing that was, needless to say, hotly anticipated, was Japanese celebrity personality Kayo Police-san donning the Bayonetta cosplay costume! The costume, as you may know, has a bit of an audacious open-back design, but seeing her wearing it in person was really floored me. Being so innocent myself, I got so excited that I couldn’t look directly at what was going on… But I digress… Anyways, Kayo Police-san seems to be a pretty staunch fighting game fan when she games, but to make sure she was ready for the shoot, she put a good chunk of time into the retail version of Bayonetta (I hear she has even beaten the game now!) I am incredibly grateful for her enthusiasm towards Bayonetta. She even did a great job of picking up the slack when it looked like I was going to foul things up… Thank you so much, Ms. Kayo Police! 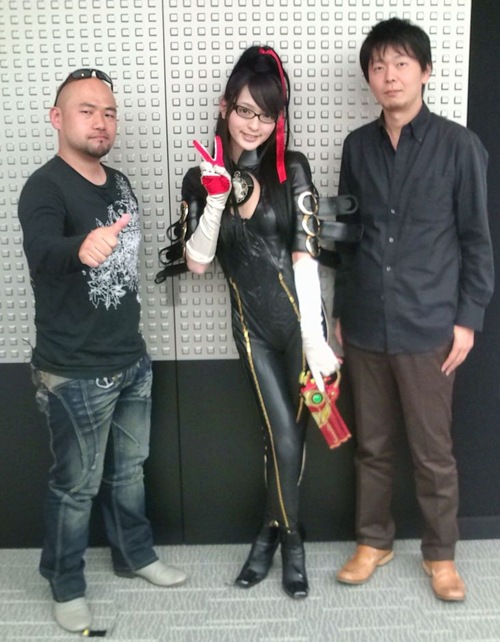 Picture: Ms. Kayo Police surrounded by a couple of old dudes. She has a style that makes you think she isn’t Japanese, and she wore the costume perfectly! Standing next to her, I really end up looking like Doraemon or something…

And now for something completely different… The other day I got the chance to have a chat with Mr. Masahiro Sakurai, creator of Kirby and the Smash Brothers series amongst others. Speaking of Sakurai-san, I read your column all the way to the very end… I’m talking about the one in Famitsu, of course.

I was able to share a few words with Sakurai-san at this year’s TGS, but I had never really talked to him before that, and this new opportunity was kind of the first chance for the two of us to really sit down and chat. I’m sort of a shut-in, so I don’t really spend much time hanging out with other people in the industry; however, getting the chance to talk with him was quite stimulating, and I took much from our discussion. The details will have to come another time…

Other than that, I had a little time to meet a lot of other people in the industry. I was able to link the games that I see to the people that make them, with moments like “Oh, he made that game…” “So what?” you ask? Well, it’s kind of hard to explain, but it was a really useful experience for me.

This month, I will also be appearing on Enterbrain’s live internet program, MIDNIGHT LIVE 360. It seems the plan is do to a one-on-one with none other than Hideo Kojima… The stuff that we talk about off-the-record is the most interesting, but we can’t really air that, can we!? (LOL) I have to be a good boy on this one, but I will still try to make it fun.

Finally, I forgot to mention this previously, but the Bayonetta Xbox 360 Premium theme is now available in Japan. It should make old-school gamers shed tears of joy, so if you got the guts to give it a try, definitely buy a copy on the Marketplace. Just to give you a hint about the theme… We created a concept called “Witch Girl Angel-land,” based around the idea of what would happen if Bayonetta was a 2D side-scroller. If Bayonetta was a 2D side-scroller, I would have definitely played the heck out it on release. You know, not buying any extra items in the game and saving up all the coins to show my true skills… The next concept is called “BAYO,” and it is based of the idea of Bayonetta as a strategy shooting game. If times hadn’t changed, this one would have definitely been ported over to the Master System… I would have played it to death along with my younger brother. The final concept was “Umbran Fighter,” or “what would happen if Bayonetta was a 3D fighting game?” I really want to play this one. For real.

So the theme is loaded with tons of little easter egg images based off wild ideas that make me happy. Let me get away with this one, OK. (LOL) Of course, our staff put hard work into the theme, so I can promise you it will be quality!

That wraps up it for this blog… See you soon! 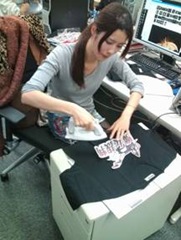 Picture: Oh yeah, the other day, we sent off the prizes for the fan site contest we held in Japan. I went out and bought some iron-on transfers, printed out a special image at home, and brought it in for Shimazaki to do her magic with the iron, turning them into great t-shirts! Made with love at PlatinumGames. 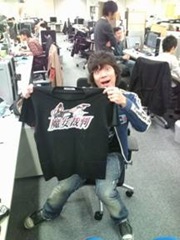 Picture: A delighted Kai-san, the man in charge of making the Bayonetta pose for our special image. We were able to use this design by getting permission from Capcom. Thank you very much to all those who made this possible.