Hey, everyone! Did anyone get a chance to see episode 8 of BayoTV on our Japanese site? I tried to watch it myself, but I was so messed up that I couldn’t make it to the end!

If you are wondering what that costume was about, it is the same costume as I use in my avatar here on the blog.

Last I heard from Hashimoto-san, we still don’t have firm plans for a western version of Bayo-TV, so if it doesn’t make it out there, check out Bayo-TV at http://bayonetta.jp/bayotv/

This was also a character I used when I was writing on the PlatinumGames corporate blog when we started the company. (Japanese)

I’d love to write on there again if I ever find some more free time.

So, have any of you had the chance to check out the higher difficulty levels in Bayonetta? Actually, I did some of the spot checking on the upper two levels of difficulty during the end of the development. The request was to make sure “a normal human being can get pure platinum if they try really hard.” As I am apparently “representative of normal human beings” I worked on balancing the game up until the last days before the deadline. In Bayonetta, accumulating points is a rather important element of the gameplay, and one of the ways this can be accomplished is via the various interactive action events. I tried to avoid really complicated inputs, and focused directly on pressing the buttons and rotating the analog stick during these sections…

Suffice it to say, in order to earn points, I would play from morning until night, pressing buttons and rotating the analog stick to the very limit over multiple play-throughs, and ending up with a fat right forearm in return. I think I hit on a new sort of exercise equipment. (That only works for your right forearm…)

Amongst all her moves, from the guns to the summons, there is one pillar that explores the more sadistic side of Bayonetta’s actions – the anti-Witch Hunt moves known as Torture Attacks. 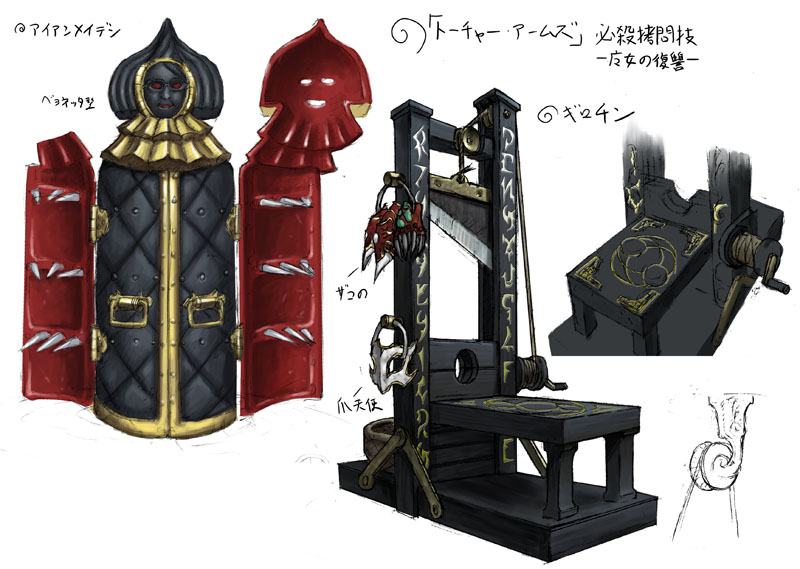 The first one that I thought up was the Iron Maiden. It was the easiest one to think up, and very fast to nail down, thus becoming the basis for all the designs that came after. The main part of the design is the face design patterned off of real Iron Maidens used during the Middle Ages. However, just tossing something into the game like that wouldn’t be very interesting, so I gave it a little extra organic movement for kicks. That we went all the to making the Iron Maiden belch is kinda in line with what you see in the game.

The Guillotine is also a major torture attack, and I’d like to expand upon it here. However, simply using device based attacks tends to end up being “summon and done”style gameplay, so Kamiya-san and the animators would scheme up ideas that, when just hearing about, are almost unpalatable for public consumption.

“She’s just going to keep kicking him in the ass.”

“He’ll get split in two… But really, really slowly.”

The basic color scheme was gold inlays over black, and to make people feel like this guillotine has long been in use, I attached some of it’s previous “spoils” to the side. By the way, enemies that can’t be stopped by this guillotine seem to grow their necks back. Must be angels or something…? 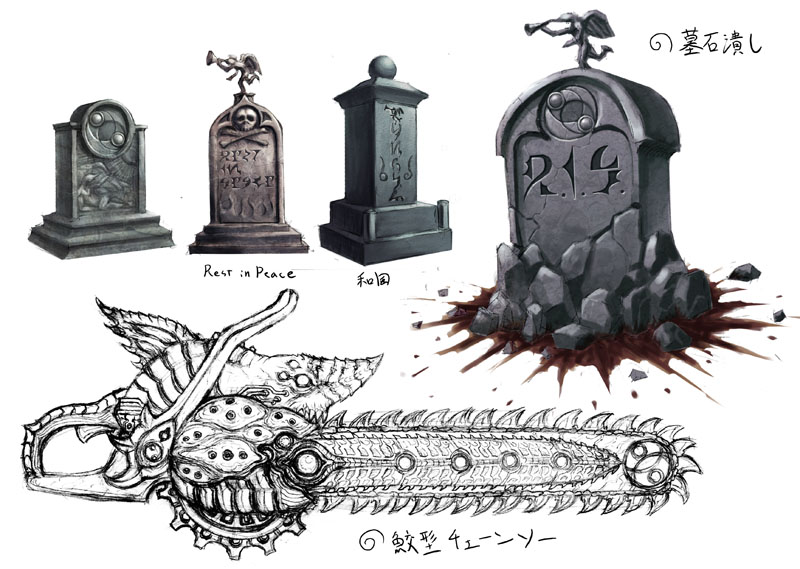 The previous two torture attacks were designed to be used with frontal and rear attacks, so then I went to work on a “Dropping Tombstone” to be used when attacking a downed enemy. I drew plenty of ideas, but we ended up going with the first one on the right. The more you press the action button, the larger and more extravagant the tombstone becomes. We even occasionally dropped a Japanese style grave randomly; however, we changed this to an idea that Kamiya-san had of a 16 ton weight. Seriously, can that man love Fantasy Zone any more!? (For me it is more of the 16 ton weight from SEGA Game Library available on the Mega Drive [Genesis].)

Also, we had to include the weapon-du-jour, a chainsaw. I designed the non-moving parts to see very organic. Perhaps in Inferno, these things are swimming around in schools. 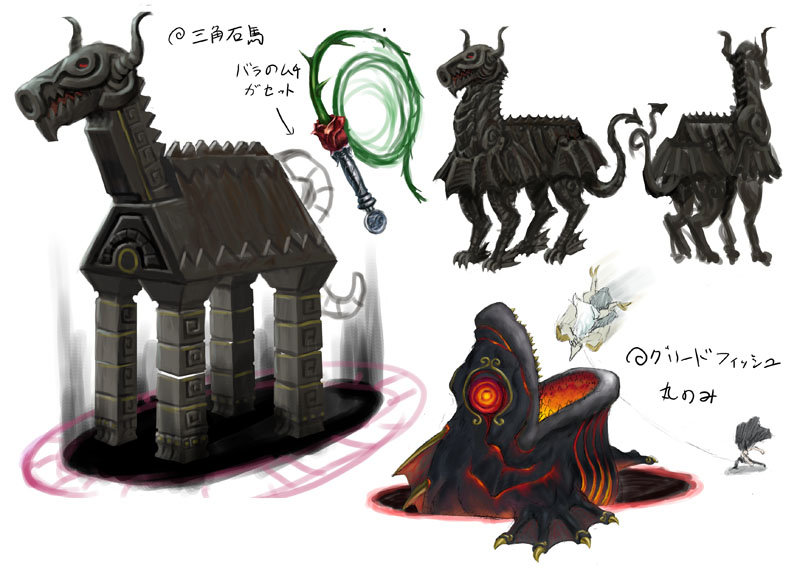 The stone horse is something that no sadistic witch could be without. Once you get a look at it in the game, you’ll realize that this one is alive, too. It has spikes on its back that look incredibly painful, and we also planned to include a rose whip as a set with this item. With all this going on, Joy must have gotten really tied up, so to speak. But I didn’t know how she would really get tied up, so I had to check some of “those” sites during work hours to get the production down just right…

The fish was a rejected idea. It was based off the fish from an old game that may have involved Balloons and Fighting, but we didn’t really have a place to put it in the game, so it got pushed to the back of the stack. 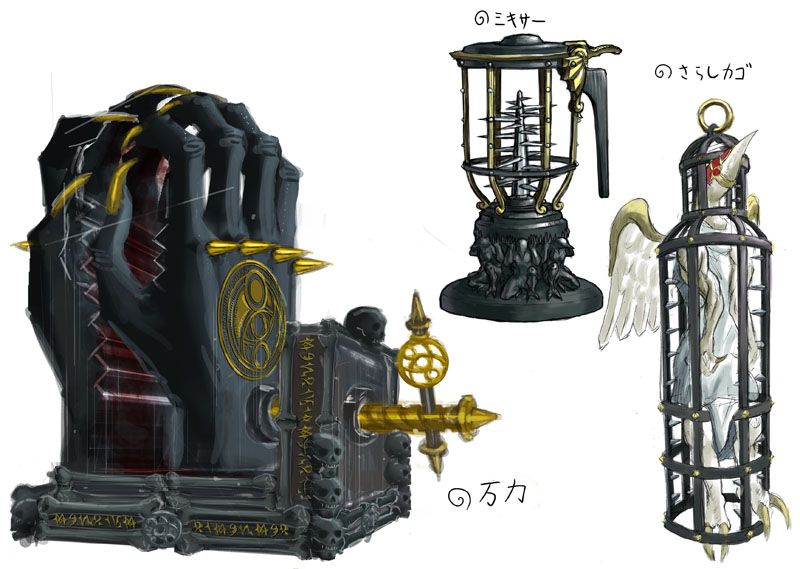 The vise was actually designed by Shimako, who stepped in as a pinch hitter while I was busy with other work. The palms being jagged like a washboard is a relly nice touch. In the game, as you rotate the analog stick, Bayonetta methodically turns the crank on the vise. I think it is probably the best example of a point in the game where the player and Bayonetta are in complete synchronization.

We didn’t have anywhere to fit the Blender into the game, so it got cut. Although, I think if we would have put it in the game, things would have gotten messy in more ways than one.

The bird cage was actually a Middle Ages torture device, but there wasn’t really a way to turn it into an action oriented event, so it was cut. I would have loved to stick chains on it and spin it around, but anytime I explain why my idea was so cool, no one would understand. That sucked.

There are many more torture attacks in the game, and they all been imbued with a bit of a sadistic edge, so I think you will enjoy watching them carefully and trying to pick out all the details. There we also ideas I didn’t get to use that I’d love to use we ever get another crack at things. Maybe they will end up alongside weapon ideas in another game…

As the weapons chief of PlatinumGames, I want to continue designing incredible weapons like the ones in this post. My aim – to be a sort of video game DARPA. (The US Defense Advanced Research Projects Agency)

Also, JP has an announcement he wanted me to pass along:

For our fans in Europe, check out the Eurogamer Bayonetta minisite, where you can enter competitions to wined signed copies of Bayonetta, pre-order the game, and try to beat Kamiya-san’s high score on the Xbox 360 demo.

So with that, I hope you all have a great time being a real witch.