Hello. This is the character designer for Bayonetta 2, Mari Shimazaki.

We’re one day away from the game’s Japanese release! Today I thought I’d talk about some of the male character designs I did for the game. 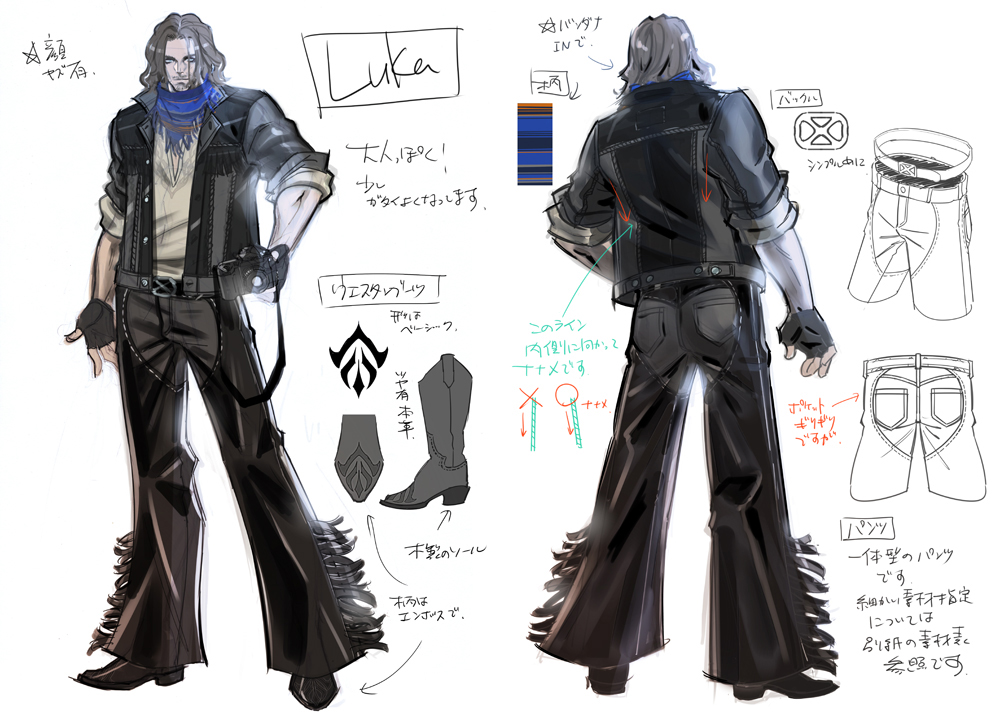 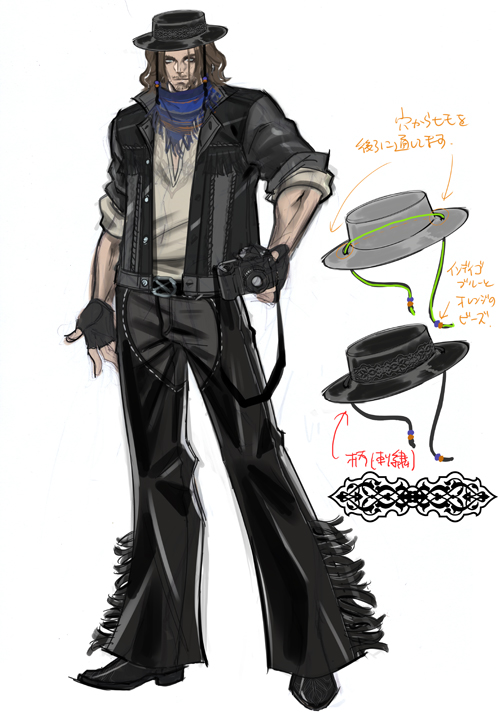 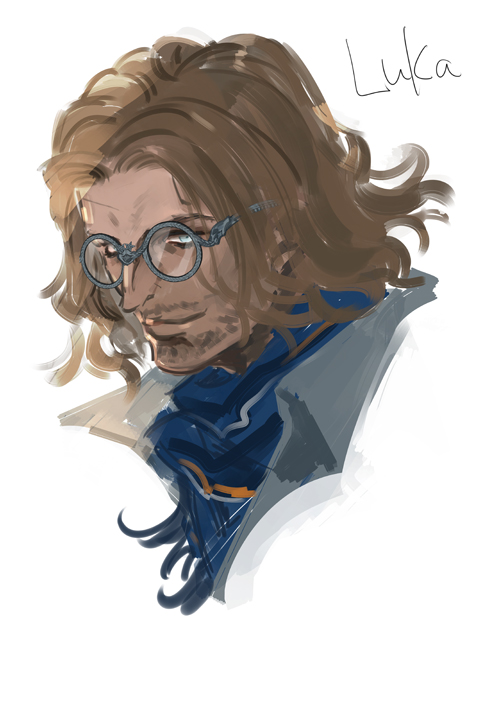 Here’s a character anyone who played the first game isn’t likely to forget: Luka. Kamiya, the game’s supervisor, asked for Luka’s new design to show that he’s overcome his troubled past from the original Bayonetta, and grown into more of a man.

This ended up being a tougher request than I imagined. I think I was just so used to Luka being a showoff bozo that at first I was taking things in completely the wrong direction.

In the previous game, he was supposed to be a fledgling journalist, but the designs I made this time had him looking like a war correspondent, or the main character from Robert Rodriguez’s El Mariachi… I couldn’t peg what “grown into more of a man” meant. I knew I had to make Luka somewhat flaunty, but if I took it too far, he wouldn’t fit with the overall design motif of the sequel. I decided to show the player just a hint of the old Luka flair with the hat he wears during his entrance.

In the design I settled on, I think I was able to give Luka some semblance to the young days of his father, Antonio Redgrave. But regardless of how I changed his design, it looks like Bayonetta still treats him more or less the same. I think you can anticipate more of the same classic slapstick in Bayonetta 2. 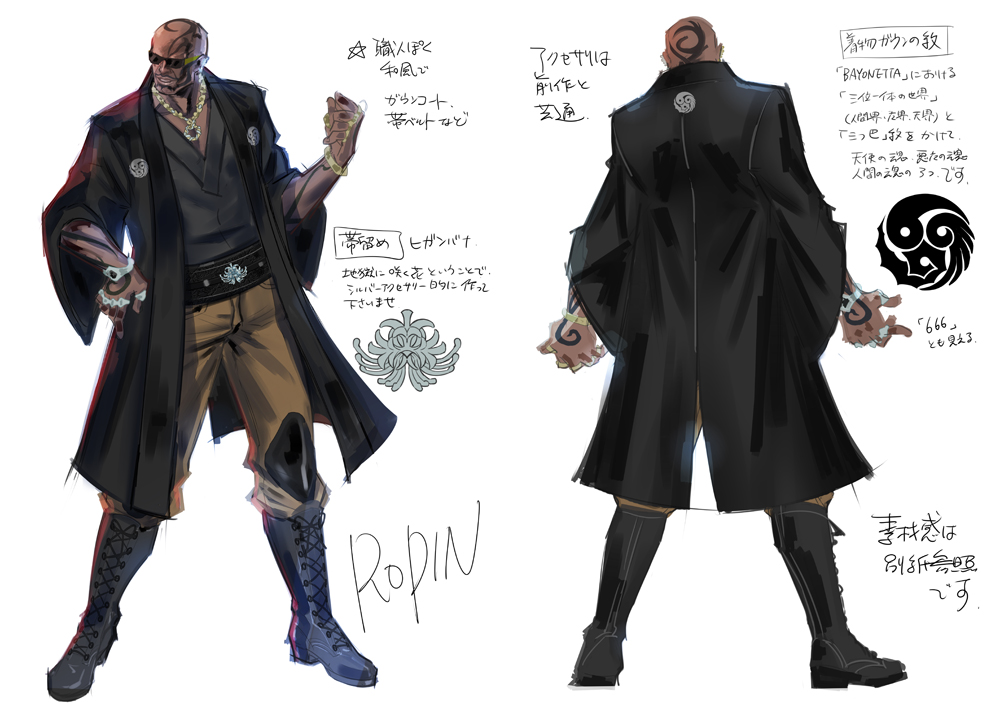 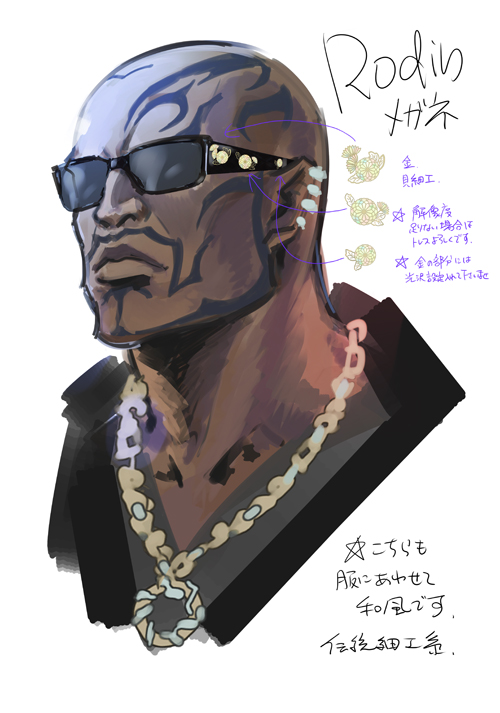 Rodin was one of the easier characters to figure out.

They didn’t give me any specific direction, so I started trying him out in both traditional Japanese outfits and regular clothes. I learned that Japanese clothes look really good on Rodin and, judging by how fast the designs got approved, I know the team thought the same.

If you’re going to be an arms dealer, I think this is the right look.

Most likely he stopped by Japan to procure some merchandise, and picked out a few outfits on the way, right? (Which probably means he’s gotten his hands on something again, like he did with the PE uniform in the first game.)

I gave his glasses some traditional Japanese craftwork to go along with his outfit. I feel like the Bayonetta team not only puts up with this level of detail, but expects it. This is one reason why I’m grateful to work with them (of course, it’s not like they let me get carried away with everything.) 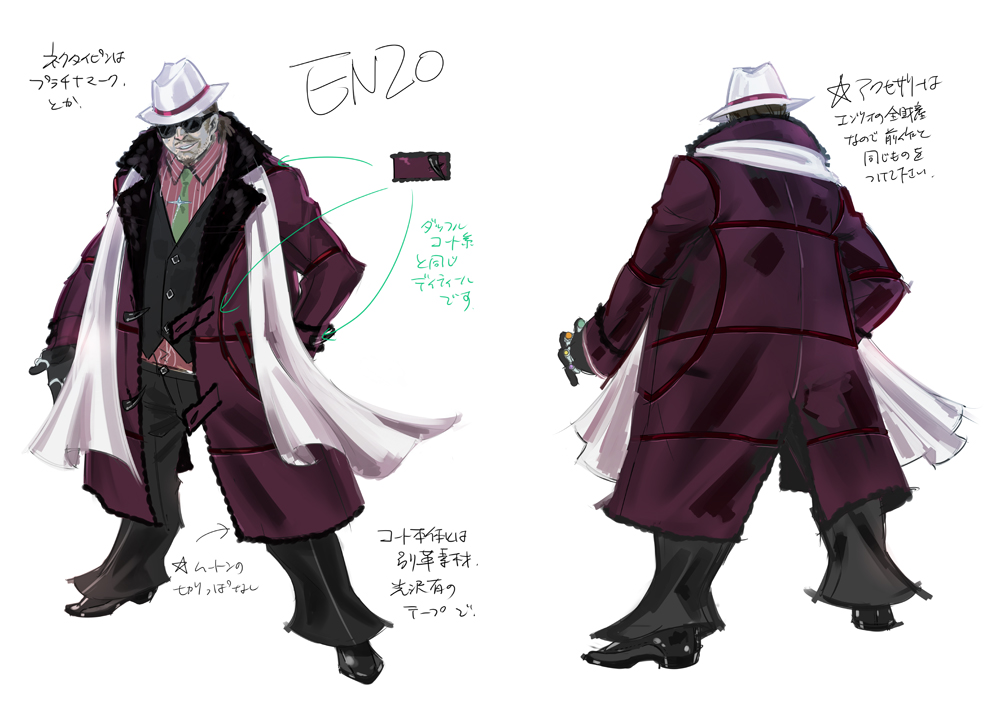 Just like in the first Bayonetta, we settled on Enzo’s design faster than any other character. Maybe it’s just because his character is so easily understandable, or maybe it’s because his shape makes it so easy to tell what works with him and what doesn’t. The concept for his character is “wannabe Italian gangster”. I like to imagine that he finally saved up enough to buy one nice suit, just to get a bit closer to his dream.

A major change Enzo made from the last game is his color scheme. His key color last time was green, whereas this time it’s dark red. I like to come up with a key color when I design a character (Bayonetta is black, Jeanne is red, Luka is blue, etc.), and once I decide a color I typically don’t drift too far from it. Only, in Enzo’s case, that would mean changing barely anything about him, save the style of his clothes. I didn’t want that, so I took the leap and made him dark red. Well, Enzo’s humpty dumpty figure and sunglasses probably leave a stronger impression than his clothes do anyway. I left his necktie green to display my slight unwillingness to let go of the past.

Right before Bayonetta hits stores in Japan, let’s share this one last picture. 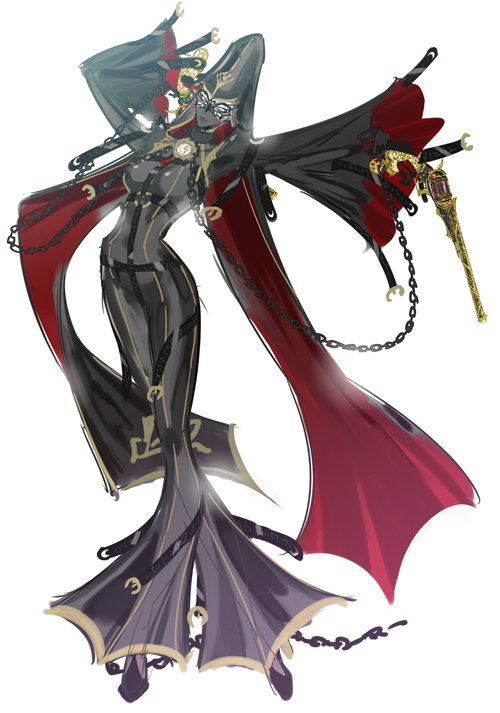 This looks oddly familiar… this clothing… could it be…?

I think I’ll wait and let you discover her true identity for yourself when you play the game.

It’s only a bit longer until the game comes to NA and Europe as well!

I hope you’ve enjoyed my art!