Hello everyone, it’s been a while. This is Hideki Kamiya, director of the first Bayonetta, and supervisor on Bayonetta 2.

At long last, the release date is right around the corner! It’s been a long road getting here, filled with bumps, twists, and turns. There was even a time when we almost lost hope of releasing the game altogether. It makes me happy that we can bring you Bayonetta 2, and I would like to extend my personal thanks to Nintendo for stepping in and making this game a reality.

In a blog a while back, I briefly mentioned my role as scenario writer on this project. To my surprise, a lot of fans seemed really surprised by this news, and I realized that I haven’t properly explained what this entails. This time, I’d like to explain how I worked on the scenario for Bayonetta 2. 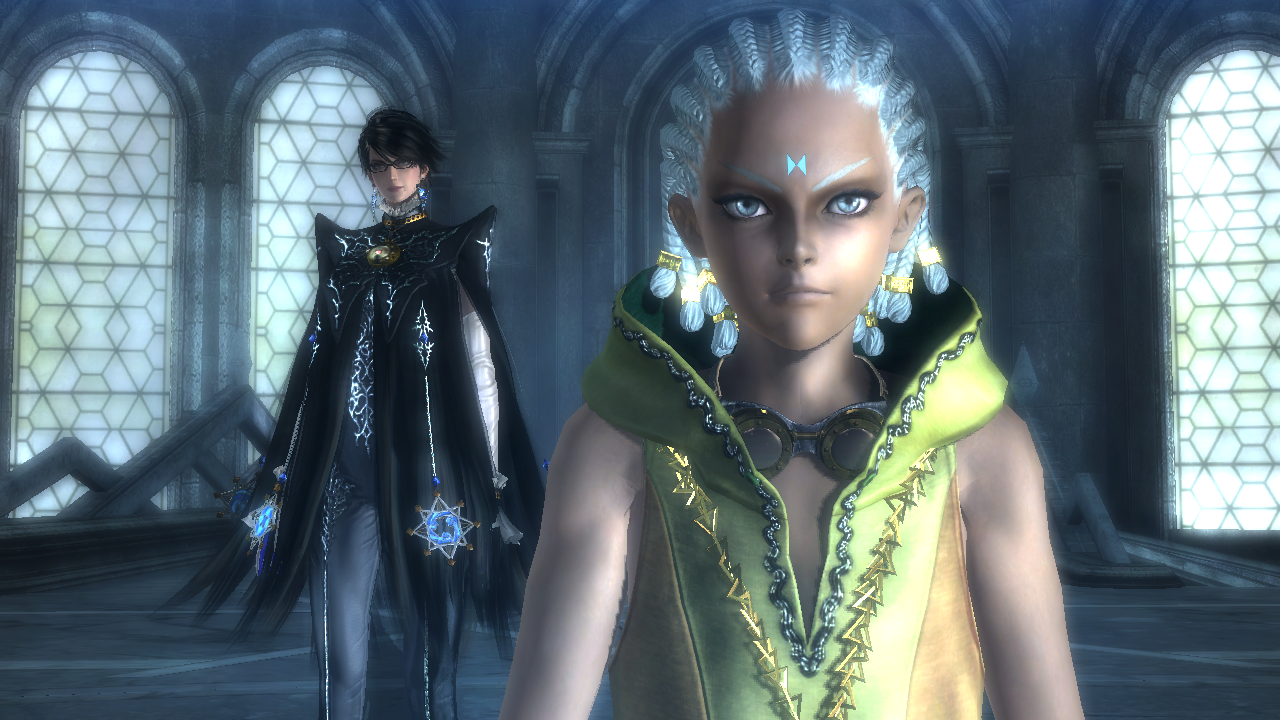 But before we get into that, I’m sure many of you are a bit confused about what a game supervisor does. It is quite an important-sounding title, but to put it simply, they supervise the project from a position one-step removed from development. At PlatinumGames, the person who has the final say on what goes into a game, and who is ultimately responsible for how it turns out, is the director. I believe that every game should be infused with the unique color of its director. Because of this, my involvement in Bayonetta 2 consisted of regular meetings with Director Hashimoto where I only provided advice when necessary. The one exception perhaps, was Jeanne; when it came to her character, I butt in with my comments at every opportunity.

That said, not only was Hashimoto the producer on the first game (the person in charge of team management and strategic decisions for the title), as an artist he also designed all the enemy angels. By the way, he is once again doing double duty on Bayonetta 2; this time as director / enemy designer! Since he is someone who deeply understands and shares my vision for the world of Bayonetta, I hardly needed to nit-pick his decisions whatsoever. And Hashimoto isn’t the only one returning for the sequel.

With “Don-san” programming the enemy angels / demons, Shimazaki designing the characters, Yamaguchi handling the animation, Ueda and Mr. Rei Kondo on music, sound effects by Daisuke and Sound Deluxe, and Tsuda and cinematic director Shimomura in charge of cut scenes, all the key staff that together created the world of Bayonetta came back for a return performance. I had nothing to worry about.

Long story short, I was not directly involved in the day-to-day production of Bayonetta 2. The scenario, however, is a different story. I talked with Hashimoto and we decided that, since Bayonetta’s dialog is one of the key things that makes her character, it would be best for me to continue my role as scenario writer.

However, with my hands full directing The Wonderful 101, I didn’t have the luxury of devoting myself to working on the scenario. Help came in the form of Bingo Morihashi, a skilled scenario writer who happens to be an old colleague of mine from my Capcom days.

I chose Bingo for this job because he has a lot of experience writing for games that have a similar style to Bayonetta.

A game scenario is about more than just having the characters deliver the story. With the pace and progression of the game in mind, you have to consider the timing of the cut scenes and battles; it is the key to composing the game’s overall balance. Constantly interrupting the action will kill the player’s momentum, but a complete lack of context to get the player pumped up will make the climatic moments fall flat. The job of a game scenario writer is to dole out story appropriately, while making sure the game still feels brisk and fun. Bingo, with his wealth of scenario writing experience, was just what the doctor ordered to complete the scenario.

Planning for the Bayonetta 2 scenario began during a discussion with Hashimoto. It was almost like a casual chat, where we went back and forth saying “what if this happened?” and “what about this character?”, deciding the overarching story and overall structure of the stages. Once the rough outline was in place, we brought Bingo into the discussion and had him fill in the details. Next, we had Bingo turn this outline into a game scenario. This became the first draft of the scenario: a detailed plan for each stage explaining when each cut scene would play, how each character would make their appearance, and the way each story beat would unfold. From here, I worked on the flow of the characters’ dialog and added scenes to bring out that unique Bayonetta flavor. At this point it was basically the text equivalent of a storyboard; everything was in place. Since the first draft was well structured, I was able to concentrate on bringing out the personality of the characters and fleshing out the world without having to worry about the story / action balance. At the end of this process, we completed the final draft of the scenario.

Next, building off this scenario, cinematic director Shimomura added his own interpretation and touch to the scenes. Ultimately, we ended up with a story so wildly over-the-top that it might even outdo its predecessor. I can’t go into any story specifics here, so please play the game and experience it for yourself!

We are nearing the end of this post, but I hope you enjoyed hearing about the scenario writing process. We have inherited the same Bayonetta flavor from the first game… no, that’s not quite right. The truth is, the two stories are inextricably linked; they are two sides of the same coin. For those of you who will be entering the world of Bayonetta for the first time, I highly recommend you play through Bayonetta before jumping into Bayonetta 2. To those handsome individuals among you who have already played through the first game, it wouldn’t hurt to play it again as a refresher.

Actually, on second thought, it might be interesting to go back and play the first game after you have beaten the sequel… I’ll leave it up to you.

As always, please let me know what you think about the game!