Hello everyone, my name is Ryoya Sakabe. I’m a game designer here at PlatinumGames. It’s nice to get a chance to write to everyone.

I was a member of the team that made Bayonetta 2. In fact, it was the first game I ever worked on. When I saw my name roll by in the credits I got a little choked up. I had to move all the way from Hokkaido (1,500km away) to work at PlatinumGames, but it was totally worth it!

Alright, enough about me, let’s talk about Bayonetta 2! Today, I would like to focus on team battles!

It goes without saying that there are co-op battles in the new Tag Climax co-op mode. However, there are also scenes in the story mode where you fight alongside A.I. controlled characters. These make for some really exciting battles, and are one of the cool new features Bayonetta 2 brings to the table. You can do crazy torture attacks together, and see some cool teamwork. Definitely keep an eye out for these scenes when you play the game.

Of course, actually getting this feature into the game was a serious challenge. A great example is Loki, a key character in the story of Bayonetta 2. You fight together with him in many battles throughout the game. 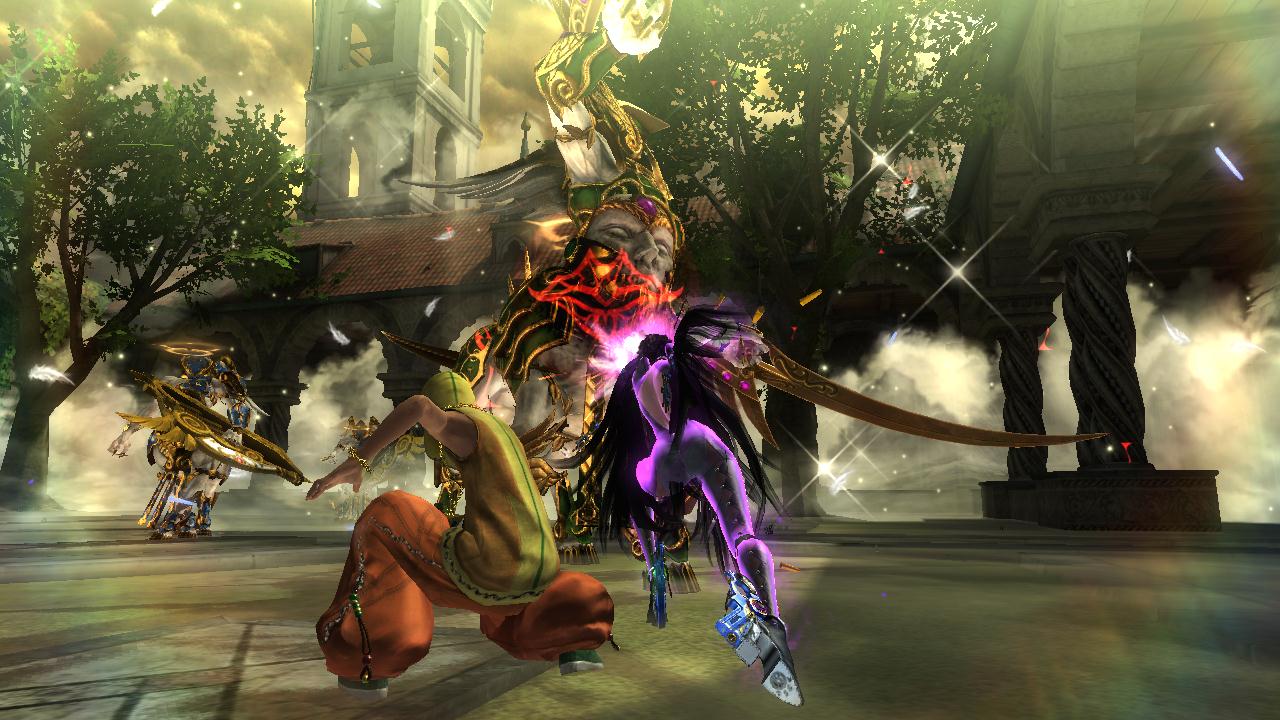 (Loki and Bayonetta mid-battle. At first I was so fixated on showing how cool Loki was, I designed him so all his attacks sent enemies flying! I ended up having to tone things down after various members of the team pointed out how ridiculous it was.)

Yet, there was a time when, outside of cut scenes, he only fought in a single scene (the one right after you meet him.)

Fast forward to the last leg of the project. With the deadline looming, I was trying desperately to improve the sections I was in charge of in any way possible. One day, I received a request from Director Hashimoto:

“I want Loki to do more in this part.”

(Note: just what “part” he was referring to, you’ll have to wait and see!)

Where did that come from!? Sure, having two characters fight together had been part of the plan since early in production…but there were schedule constraints to consider, not to mention the effect these battles would have on the game’s tempo.

As the game designer in charge of Loki’s moves, I started to panic. I was concerned that we wouldn’t be able to implement the feature in time. But, putting those fears aside, I decided to take on the challenge.

Why, you ask? Because I knew it would make the game more interesting, that’s why!

And so, Operation Make Loki Less of a Wimp was underway.

Since Loki deftly avoids enemies’ in cut scenes, I decided to have his in-game moves reflect this by allowing him to spin and jump out of the way of attacks, and throw cards while dodging. When planning these moves, I was careful to make sure they didn’t steal the show too much. After all, the star of Bayonetta should always be Bayonetta herself. If Loki is going all out every five seconds, players would not be able to focus on the battle at hand. Loki is a support role, so I made sure that when the player does notice him, it is only to the extent that they can confirm that, yes, he is pulling his weight in battle. Also, if he was too powerful, he would end up finishing off the enemies and stealing the player’s glory. I made sure to balance his strength to make sure the player still feels like they earned their victories.

When one of his attacks connects, it will momentarily stun weak enemies, giving Bayonetta a chance to go in for an attack. He really has your back!

Next, I thought about how to make him act outside of combat. This involved adjusting the speed he moves when leading the player, and the timing of the hints he calls out. My top priority was striking a balance so that players notice the things I want them to see, without making the game stressful to play.

If Loki runs off ahead, you lose the sense of exploring together. On the other hand, if the player is always forced to wait for Loki to catch up, they will quickly get frustrated. It took a lot of trial and error to get this feeling right. Keeping Loki’s character in mind, I tried to add some personality to the way he moves to keep things fresh.

That’s a brief look at how we designed Loki’s character in-game. I would talk with the staff from the various art and programming sections first thing in the morning, and we’d try implementing new ideas and balance them out. Everyone gave it their all to make the game as fun as possible.

After the game was finished, I went back and played the sections where you fight together with Loki. I had this big satisfied grin on my face that I couldn’t seem to get rid of. It was worth the extra effort, without a doubt.

We focused on Loki this time, but the other characters you fight alongside each have their own unique aspects (they had their own set of difficulties to overcome during development.) I hope you find all the team battles exciting as you play Bayonetta 2!