Hello again! ASTRAL CHAIN main scenario writer Akiteru Naka here. Time has flown by since ASTRAL CHAIN came out back in late August, and it’s great to see there are people out there still picking up the game!

In my previous devblog, I shared some of my process for writing the game’s main storyline. This time I’d like to go into a few smaller details about, well, the smaller details that make up the game’s world. Think of this as a collection of ASTRAL CHAIN trivia!

Putting the Team Together

First of all, let’s look at the minor characters who make up most of Neuron. Some of these officers play small parts in the main story, though most of what you’ll see of them comes from chatter around HQ and optional side cases. Are there any Neuron squadmates you particularly enjoyed working with?

Personally, I’m fond of the occult-obsessed field officer Shizu, and the jaded desk jockey Kay. Huh, come to think of it, they both wear glasses… Either way, there’s a Neuron officer for almost any personality.

So how did we come up with all of them? Their roots are very simple, really. I started out with one short concept to define each officer: their personality, how they speak, everything, summed up in one concise phrase.

“Brainiac.” “Weakling.” “Energetic.” “Animal lover.” “Vain.” So on, so forth. (Can you guess which Neuron officers those words describe?) Of course, each officer was fleshed out with input from the director and artists, but those simple foundational concepts stayed unchanged. Looking back over early design documents, for example, Shizu started out as “Occultist,” and she stuck to that concept all the way through. Kay’s original concept was “Item Otaku,” and while she still plays that role in Neuron in the completed game, her ways of speaking and moving changed over time to give her a unique personality.

Most of these officers aren’t named or modeled after any particular person. Once the character concepts were complete, I just went with my gut to give them names that felt suitable. If you’ve walked around the Ark with your IRIS on, you’ve noticed that every single NPC has a unique full name; these came from an extremely extensive list of names drawn from cultures all over the world.

There are two Neuron officers who were named after specific people on the ASTRAL CHAIN dev team. I won’t tell you which ones, but if you get a chance, play the motorbike sequence in File 01 again and see if any familiar names jump out at you from the staff credits. Remember to keep one eye on the road, though!

Personally, I choose to believe that bike segment was intended as an homage to the NES game Mach Rider. Riding a bike around, shooting a machine gun… Yeah, that’s gotta be it… Man, that game was fun…

Oh! Right. Back to Neuron.

In an early game concept, every member of Neuron was paired up with a partner, and all of them had Legions of their own. However, after we decided only a few characters should have Legions, we realized that two Legionless officers might not be enough to handle chimeric threats on their own. So the gameplay concept of building all of Neuron around pairs of officers was scrapped.

However, you can still see some of these partnerships playing out between certain pairs through their dialogue. For example, Leona and Julia live together. Mitsuru’s timid personality clashes with a certain boisterous officer he can’t get away from. The mostly-silent Sarah depends on Joey to help her communicate clearly with others. So on and so forth. The gameplay dependence on pairs may no longer be there, but these relationships remain in the story.

Speaking of Sarah, did you notice that she does actually speak at one point in the game? 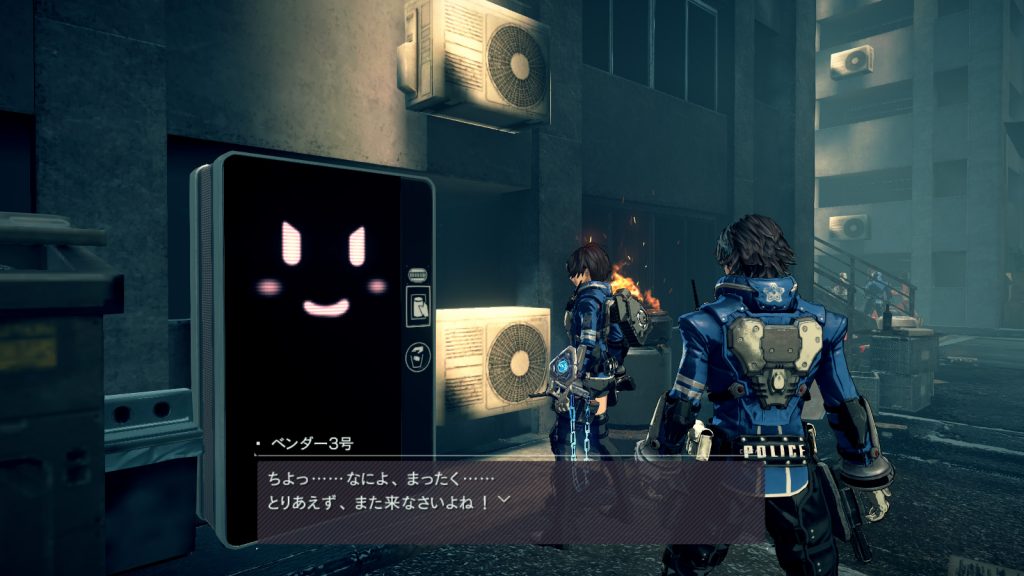 Now let’s take a look at another popular, uh, character: Vendor-3! Neuron HQ is home to the friendly, cheerful default model, but there are several varieties of this AI-equipped talking vending machine throughout the Ark, each with its own personality. There’s even a Vendor-3 unit stuck somewhere in the Astral Plane… To be honest, at first I didn’t expect we’d make so many different Vendor-3 personalities.

The idea for talking vending machines came up very early on. However, we only originally planned two different types. One of those is the stock Vendor-3 that you’ll meet in Neuron HQ. The other is one-of-a-kind: Vendor-0, a discarded Vendor-3 unit that the Hermits of Zone 09 salvaged and hacked to sell their own wares.

But thanks to cooperation and ideas from several different members of the dev team, we ended up with nine total Vendor personality types! Making one of those types exclusive to the Astral Plane was another unexpected addition.

As the number of Vendor personalities grew, so did their voice needs. At first I cut down several voiced Vendor lines, but then I got yelled at – “We went through all the trouble to make facial animation for the Vendors, and we need to play voices for them to be displayed properly!” So I went back and revisited Vendor-3’s voice scripts yet again, finishing them just in time to meet the final, no-turning-back deadline.

I hope you enjoy tracking down and speaking with all the different Vendor varieties in ASTRAL CHAIN! All Vendor units are voiced by the same actor in each language – one in English and one in Japanese – so I hope you’ll change your language settings up and hear both of their performances across all nine types! 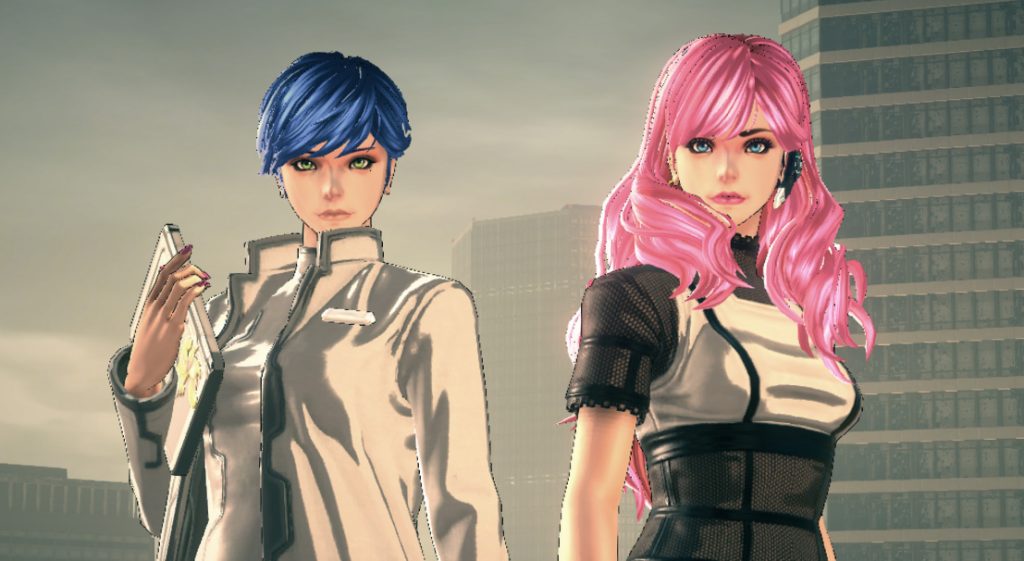 If you read our pre-launch interview with director Takahisa Taura and character designer Masakazu Katsura, you may recall that the player character and Akira weren’t twin siblings in the original scenario draft. However, that version of the story still featured a prominent pair of twins: Olive and Brenda!

Once we decided to make Akira and the main character twins, we figured having two pairs of twins in a task force as small as Neuron wouldn’t be impossible, but perhaps a bit implausible. Olive and Brenda are no longer sisters, but they remain very close. 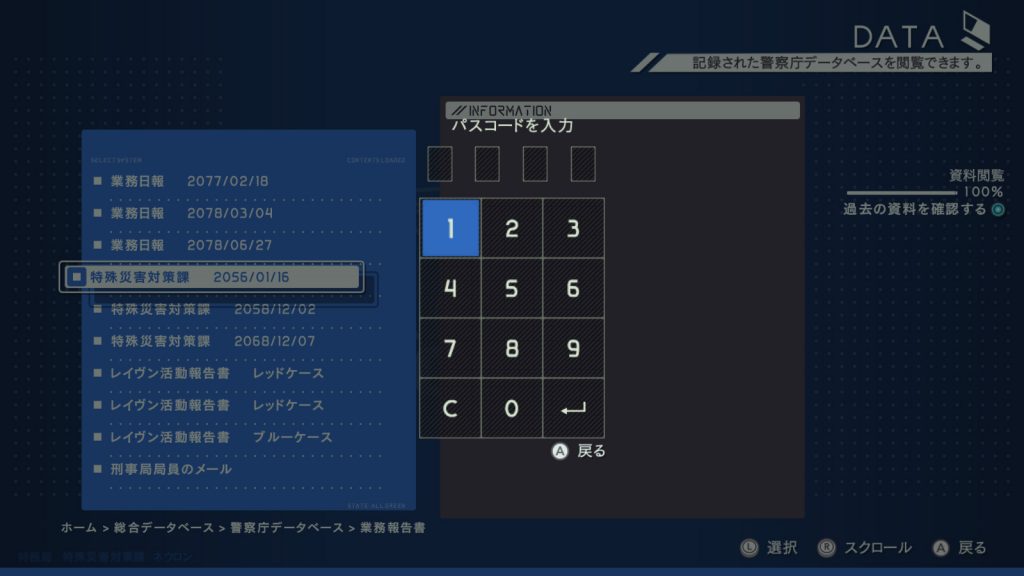 At the start of File 6, you’re given an opportunity to browse through old files and reports from Neuron’s database. These provide extra insight into the history of Neuron and the Ark. However, a few of them are locked behind a certain passcode.

If you haven’t figured out the passcode yet, let me give you a hint. The locked reports were all written by Max Howard. If there’s one thing we know about Max, it’s that he’s a proud father of twins. Now, what four-digit number might a guy like that use for a password… 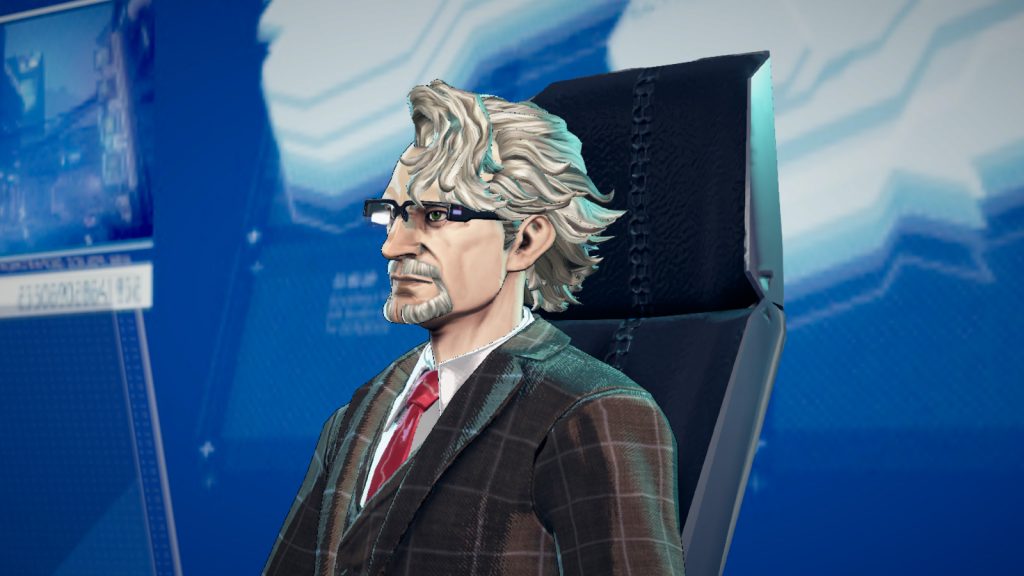 ASTRAL CHAIN is set in the future, but not as far in the future as you might think. If you look at Neuron commander Yoseph Calvert with your IRIS, you’ll discover that he was already alive in 2019. 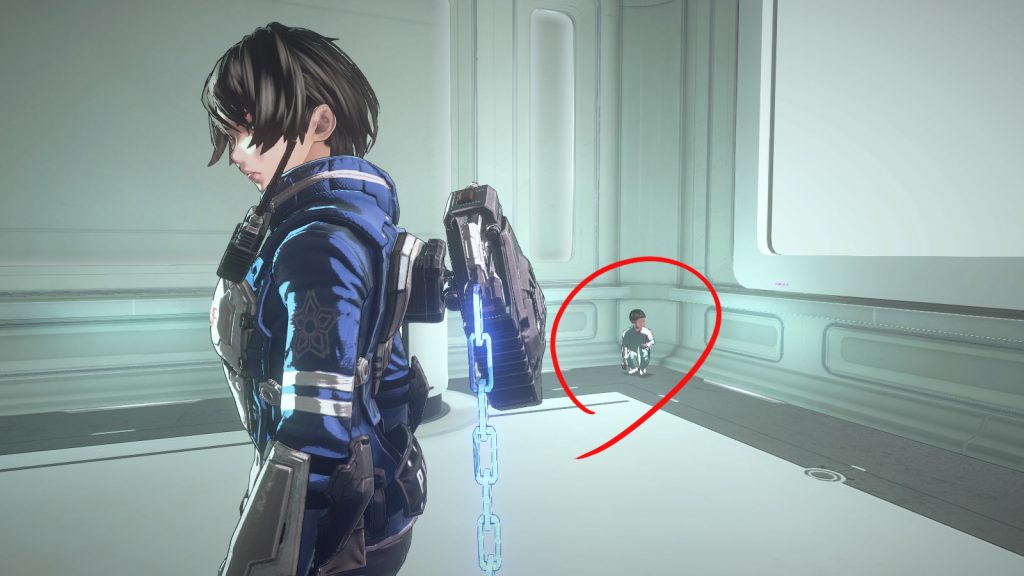 Have you found this little guy crouching in the corner at the Aegis Research Institute? Oh, he doesn’t do anything if you find him. I’m just curious, is all.

Thank you for reading – and for playing ASTRAL CHAIN!

Akiteru Naka
Since joining PlatinumGames in 2011, Akiteru Naka has worked as a game designer on Anarchy Reigns, Metal Gear Rising: Revengeance, Bayonetta 2, Star Fox Zero and more. On ASTRAL CHAIN, he wrote the main script and supervised side case content.