To think that we really made it this far… there’s always a nervous excitement whenever the release date of one of my games approaches, but this time there’s an emotion attached deeper than anything I’ve felt with any of the other games I’ve worked on in my life as a creator, and also a kind of fear about sending it out into the world.

After all, SOL CRESTA started as an April Fool’s joke by PlatinumGames, with this trailer released nearly two years ago on April 1st, 2020.
(https://www.youtube.com/watch?v=lmFIDbsg5wQ)

For an April Fool’s joke, we did put a lot of work into this video, but when we first released it very few people laughed along with the joke. Contrary to what we had expected, players worldwide glared in anger and booed us mercilessly. We expected laughs, but it was like having cold water thrown in our faces, and we were very disheartened.

Thinking about it, I understand how players felt back then. An April Fool’s joke should be something that even if you know isn’t real, doesn’t make you disappointed or upset and is something you can just laugh off. The April Fool’s jokes that PlatinumGames had announced before, like the sale of a figure of former president Kenichi Sato or the announcement of a game starring him as Chief Executive Omni-Weapon Ken-Ichi, were all silly things that nobody was clamoring for (apologies to anyone who was), and everyone was able to have a good laugh and carry on.

By comparison, announcing the development of an all-new sequel to the classics Moon Cresta and Terra Cresta as a joke would just disappoint fans of shooting games, and wasn’t something that could just be written off as a prank.

Of course, that’s only if it was a joke in the first place. Because of course, we would never do something to trample players’ feelings. When we released that video, we had already begun working internally on the development of SOL CRESTA!

Well to be honest, even before the video was released, then vice president Atsushi Inaba and I had already been plotting behind the scenes to work on a shoot-‘em-up. The dark lord Inaba said releasing the video would make the development plan a done deal internally, and with the April Fool’s release the gears of fate began to turn and the SOL CRESTA plan took a big leap forward.

I’ve already spoken in more detail about how SOL CRESTA got started here, so please take a look later, but at any rate with that momentum we took off at a fever pitch, and this project that might have gone up in smoke at the first bump in the road, after having gone through some twists and turns, is really about to be released. Looking back now, it really feels like a tangible miracle.

Meanwhile, there is a kind of unease smoldering inside me—will the player accept this game? Of course, everyone on the team is absolutely confident in SOL CRESTA’s quality, complete with a fantastic soundtrack compliments of Yuzo Koshiro, and we can be proud to release it. However, with our new “NEO-CLASSIC ARCADE” banner and taking a jump into not only the 2D style games that were an important factor in my desire to become a game designer, but especially the vertical shooting genre with its history and traditions, I feel a nervousness and pressure like nothing I’ve ever felt before when I think about whether or not the game will stand up to the scrutiny of veterans of the genre.

On top of that, I’ve been permitted to make this game, the official sequel to the important and historic Moon Cresta and Terra Cresta, through the generosity of HAMSTER Co. president Satoshi Hamada, who protects those IP. For the sake of Mr. Hamada and everyone else who poured their hearts and souls into the series, and the fans who love the series, it’s important that nothing the series and their feelings are in no way disrespected. Even with all the other release dates I’ve waited for before, this is the first time I’ve felt something like this resolve.

Well, I’ve gone on for a bit, but no matter what SOL CRESTA will be released into the stormy seas today. All I can do now is stand strong and see its journey off.

As I wait patiently for release, I hope from the bottom of my heart that for all of you, today marks the day of your wonderful encounter with SOL CRESTA, and for the sake of future-NEO CLASSIC ARCADE titles, I look forward to hearing your honest opinions.

Finally, I’d like to give everyone some SOL CRESTA arcade panel and controller layout art as a present to help you with your strategy. These were used with the Viewlix arcade cabinet we had when we exhibited SOL CRESTA at BitSummit THE 8th BIT last summer. If you have a Viewlix cabinet at home, it might fit just right so try it out! 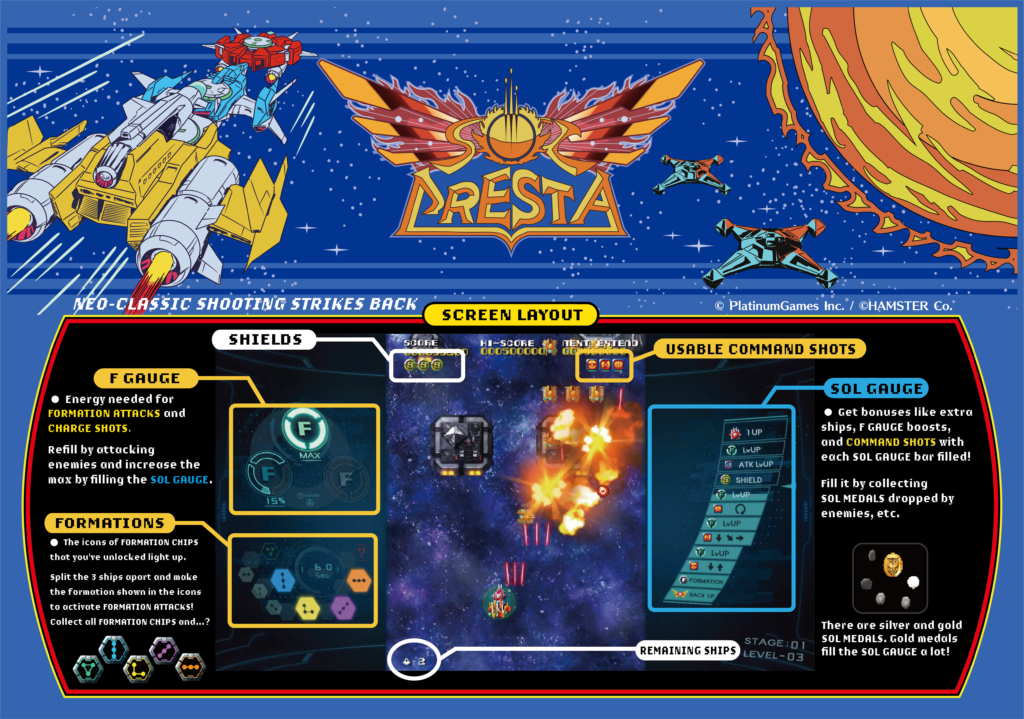 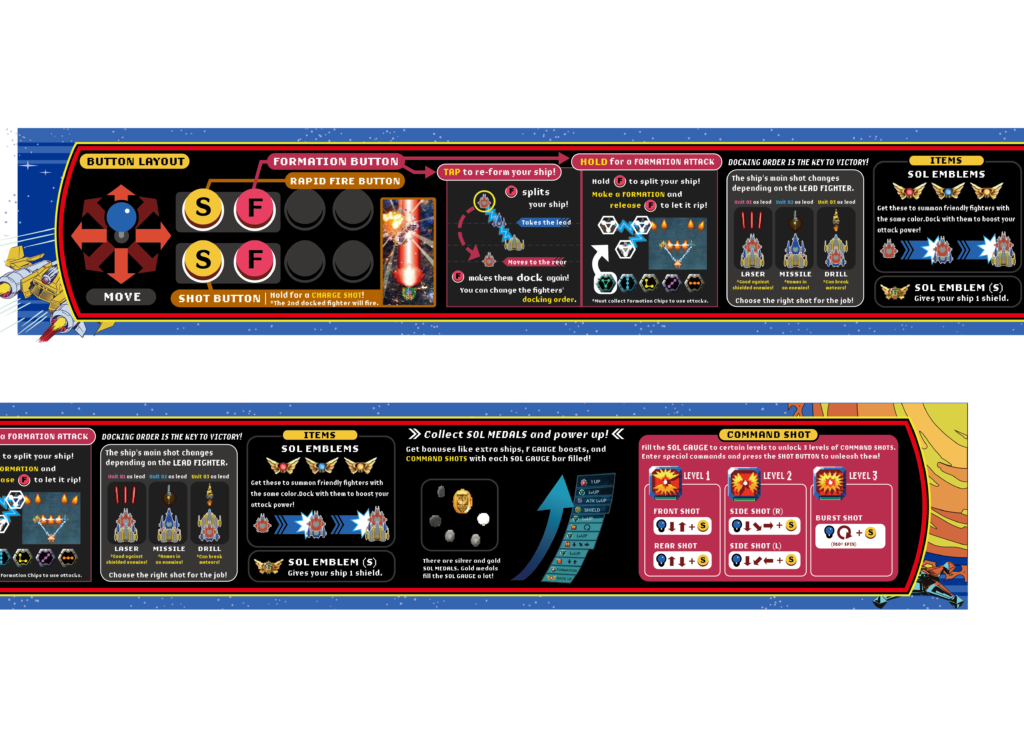