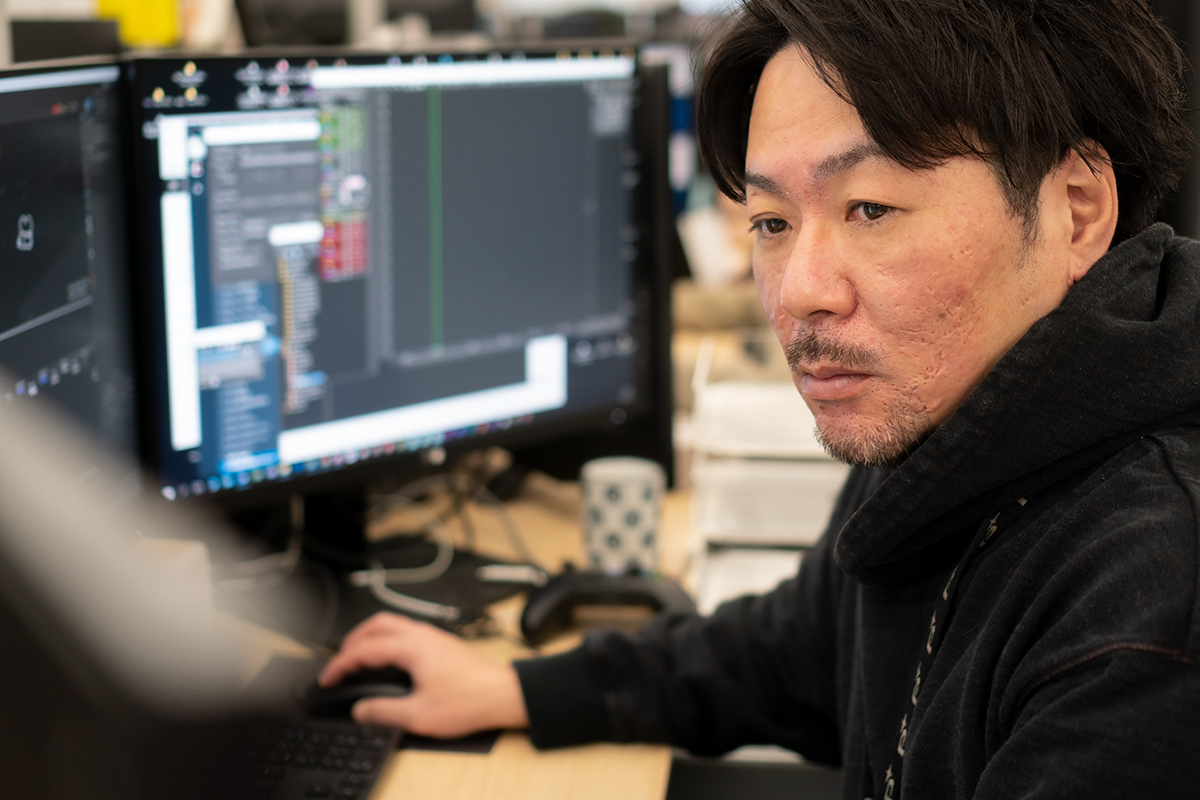 I’ve worked on cutscenes for the Bayonetta series, NieR:Automata, ASTRAL CHAIN, and, well, most of Platinum’s titles.
Typically, for each project, we’ll have a main director for the game, and a separate cinematic director. Who fits this role usually changes depending on the visual aesthetic and game design of the title. Bayonetta, for example, typically uses Yuji Shimomura, who has made his name directing action movies and TV shows.

My first experience as a cinematic director was with Anarchy Reigns. I handled everything from previz to mocap, all the way down to production. The scenario didn’t include a lot of detail for how the action in each scene should be crafted, so I decided to create some rules for the characters. The game has two protagonists: Jack and Leo. Jack is burly and brawny; I saw him as someone who moves hard and powerfully. Leo has a slimmer physique that goes better with swift, graceful movement. Giving them this contrast, I feel, helped them both stand out and give each scene more punch. Another scene I’m proud of is “Main Mission 3”, where Jack confronts Max. I decided to use the spiritual predecessor to this game, MadWorld, as a reference, and do the scene in black and white. Shooting the scene in this style really brought out Jack’s raw emotion and brutality.

Tugging at Your Emotions

I feel that the point of cinematics is to get a certain type of emotion from the player. That could be joy, sadness, or awe, but it should always push the player to want to proceed further in the game. When you see fans react to a scene in a way that you know you’ve been able to convey what you wanted, the feeling is amazing. In Bayonetta, there are a few scenes where the character just break out and start dancing, like at the Gates of Hell receiving Scarborough Fair, or during the showdown against the angel Joy. Sure, it probably threw some people off at first, but ultimately I feel it was able to better bring the player into this game’s unique world. There’s just nothing more satisfying then seeing when a scene commuicates what it set out to.

Mixing Ideas to Raise the Bar

I’ve stacked up a few years at the company at this point and people have started to commonly come seek my advice on how to direct a scene. Not just a cutscene, even just regular in-game conversations or action. I’d like to be able to contibute to the team more with each title, so I’m glad to see this kind of communication happening.

Cutscenes are essentially the movie side of the game, so of course I’d love to work with people who have a passion for movies as a medium. Creating games requires a lot of passion. For ASTRAL CHAIN, we used previz for pre-production where CG was made to test what might work in the scene. This opened conversation up to everyone on the team at an early stage, and a lot of people shared feedback, not just the director. I loved that kind of collaboration because, the more ideas you have, the more options that gives us for how to make a great scene. If you’re interested in cinematic design and feel you have different ideas you’d like to try, consider applying.