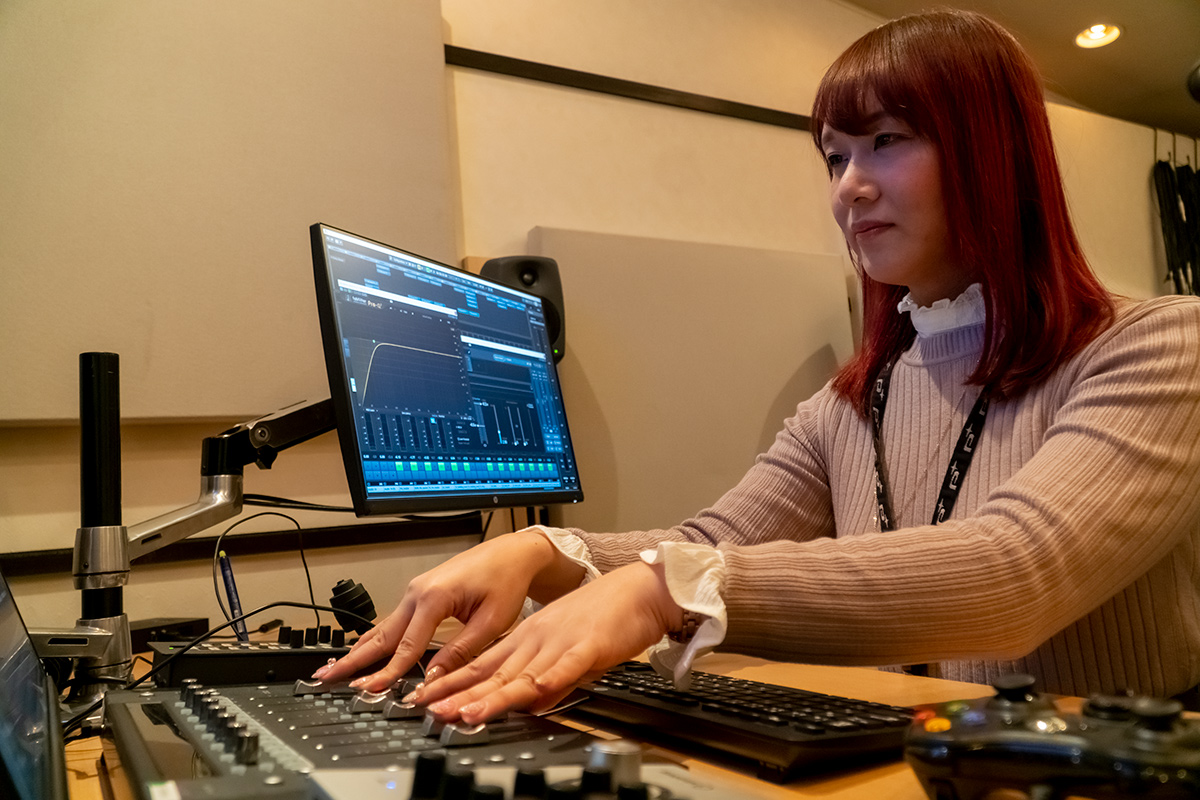 In a lot of ways, NieR:Automata was a significant departure from most of our previous work at PlatinumGames. And so, from the very start of development, the NieR:Automata team felt ready to take on new technical challenges, too. We put great care into searching out ways of doing things that players wouldn’t have seen before in other games.

As far as the sound team was concerned, one of those challenges was building a system for handling acoustics that would really draw the player into the world. I worked together with the programmers to add interactive reverb, 3D audio systems, and more. I knew all that hard work had paid off when we received the top prize in the audio division of the CEDEC Awards in 2017. With NieR:Automata, we tried to push Platinum’s sound game to the next level, and the whole game audio industry took notice. Thanks to that project, lately we’ve had more chances to discuss and share new game sound technology than ever before.

I think that, out of everything that goes into a game, audio is the part that most directly connects to players’ feelings. And out of all the sounds that go into a game, perhaps voices have the most direct impact. At PlatinumGames, the same sound designers who handle all our sound effects are also responsible for coordinating voice recordings, and implementing those voices. That includes attending recordings in person and providing additional direction to the actors, which I personally adore. Seeing the moment when the characters inside the game receive their voices and emotions – I can’t get enough of it! I’ll admit I’ve cried a few times during particularly emotional recording sessions… I always promise myself I’ll try to give players those exact same feelings.

Speaking of emotions, I’d like to share a personally emotional memory from my work on Bayonetta. I’d just joined the company when I was added to the Bayonetta dev team, and put in charge of sounds for the shooting sections of the game – you know, the ones that are kind of like Space Harrier or After Burner.

I was already a fan of After Burner’s sound, and I felt that After Burner without its distinctive radio voiceovers was hardly After Burner at all. We hadn’t recorded any voices in that style, but I edited some existing recordings to make it sound like they were coming in over a radio or intercom. I shared my idea with the director, and he gave it the go-ahead!

Now, nobody had planned anything in the setting that would’ve given Bayonetta such a radio before. But with that new idea in place, the radio got added to the game world, art, cinematics and all. At that stage of development, we were already past the art team’s cutoff for accepting new concepts. So there I was, a total newbie, bowing my head and begging the artists to give me a radio… and they made an exception to their deadline. They were on board! I’ll never forget how it felt to play the game and see and hear my radio there for the first time.

I can’t stop myself from trying anything that seems interesting, and I’ll admit I’ve been scolded a few times for spreading myself too thin. Not every challenge is a successful one, but trying things always leads to experience, and experience helps our sound team grow and evolve.

When development started on NieR:Automata, I had a personal mission: Make PlatinumGames stand out in the wide world of game sound. Following through on that mission led me to more opportunities to share audio technology, chances to present at conferences, and so on. It’s been a tremendous opportunity for personal growth, and I think it’s had a great impact on our whole sound team as well. I’m always happy to work with people who have goals – for both their career and for themselves.